March 21, 2014
I got an article featured on Hack-A-Day!  They liked my infrared temperature sensor and even gave me TWO videos to demonstrate where most projects only get one.  Thanks, Hack-A-Day.

It's been a while since the last time I visited my local hack space.  The last time all I did was drill a few holes in a small enclosure.  Today there was a robotics club meeting and I got to see people showing off some their projects.  There were a handful of people from seven years old to a retired gentleman who brought in magazines of interest.  There were $3 robots all the way to one with a laser position scanner which I had only ever seen at trade shows because they are wicked expensive.

Sitting in on their meeting was worth the trip but I also got a lot done on my own project.

Enough background.
----------
The schematic was updated to show the correct pin numbers on the 18 pin I/O Expander ICs.  Before the left and right side both said 1-9 whereas now they are 1-9 and 10-18.  The schematic for the handles was translated to a stripboard layout.  The schematic was printed 1:1 and enlarged.  The 1:1 is illegible but matches the 0.1" spacing so it can be superimposed on the stripboard.

The stripboard circuit for the buttons was cut and drilled.  Each handle needed only three drilled spots to separate the four switches.  Holes were drilled in the handle enclosures for the buttons and 3.5mm socket.

Wooden blocks for each handle were made to brace the buttons.  The blocks were also cut to accommodate the thumb button and 3.5mm socket.  The blocks made opening the enclosures much more difficult since they reinforce the middle of the enclosure where the flexibility of the plastic allows them to be disassembled.

Four switches to each handle were soldered to the cut and drilled stripboard. 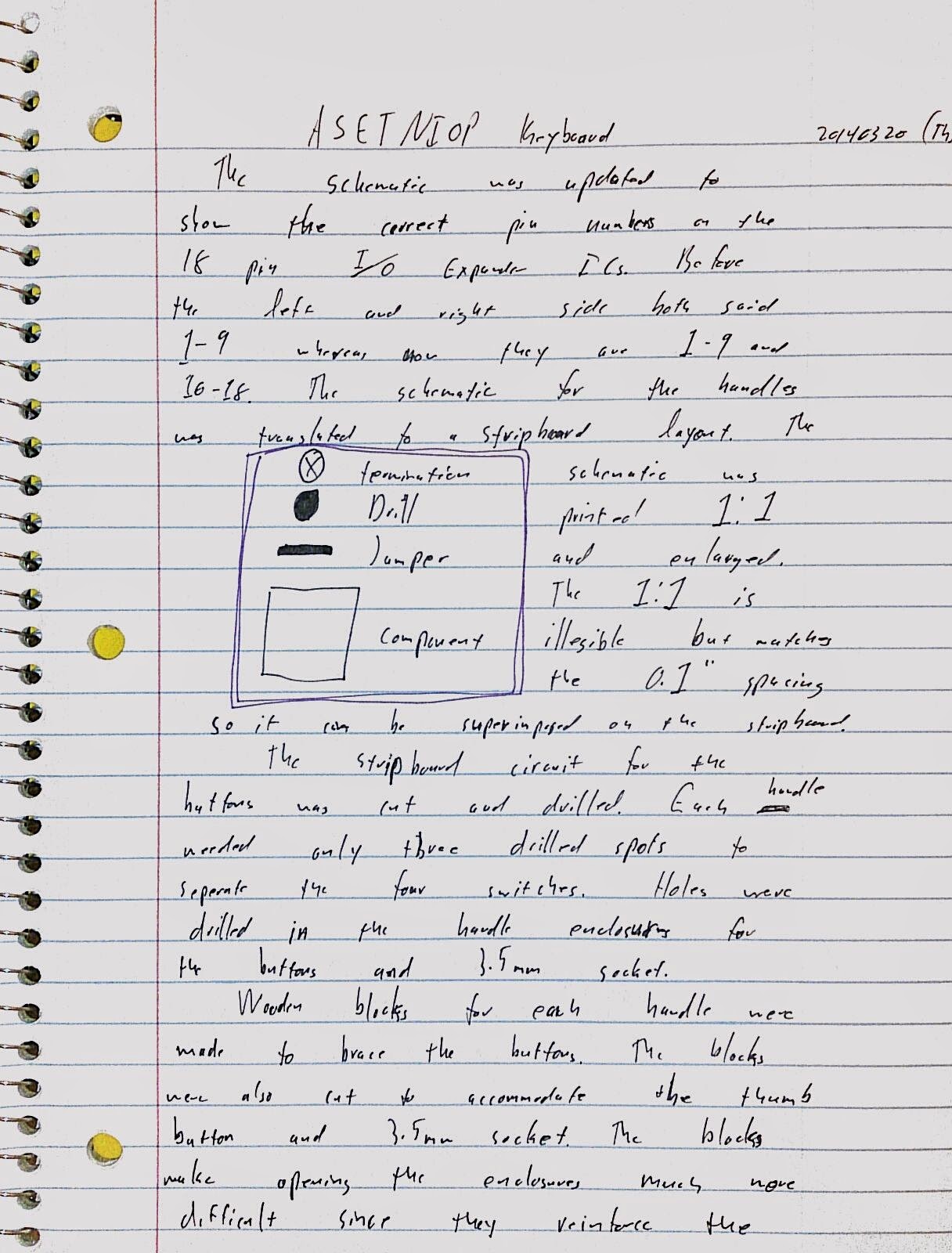 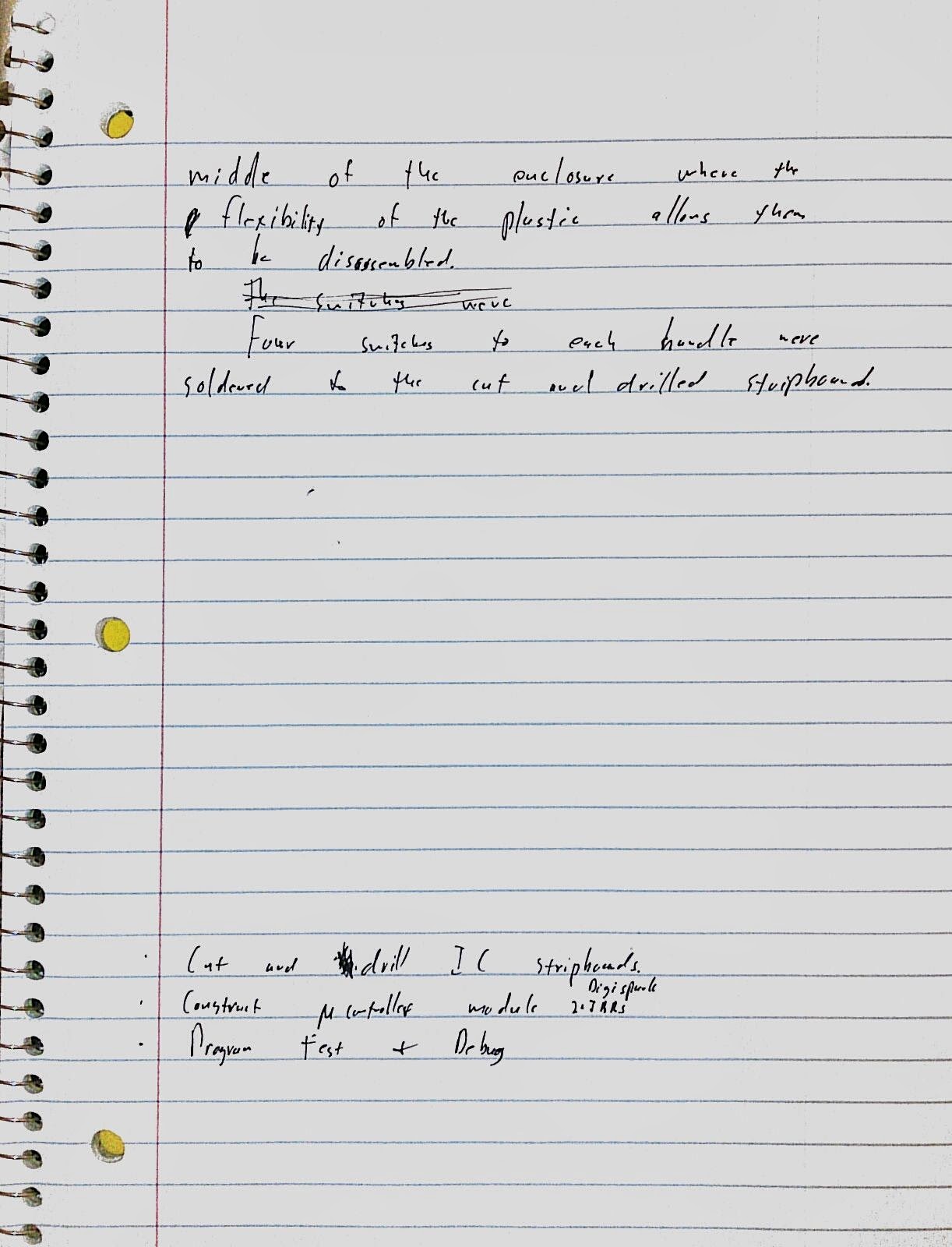 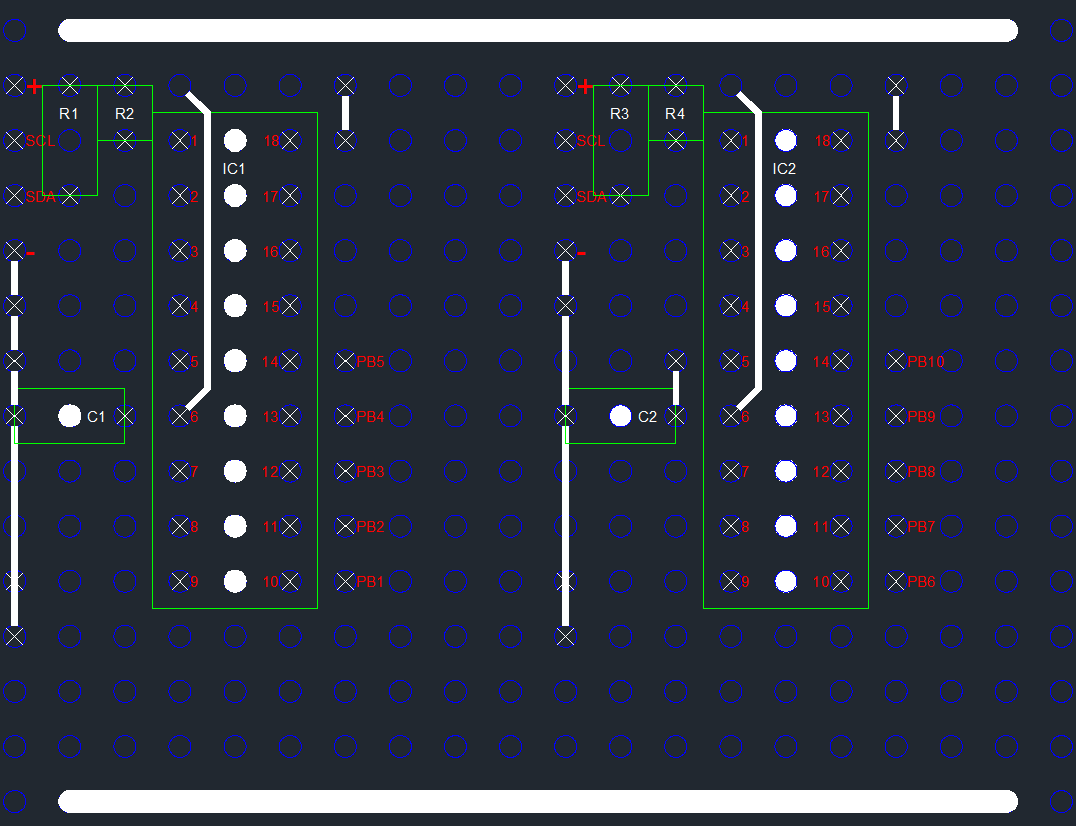 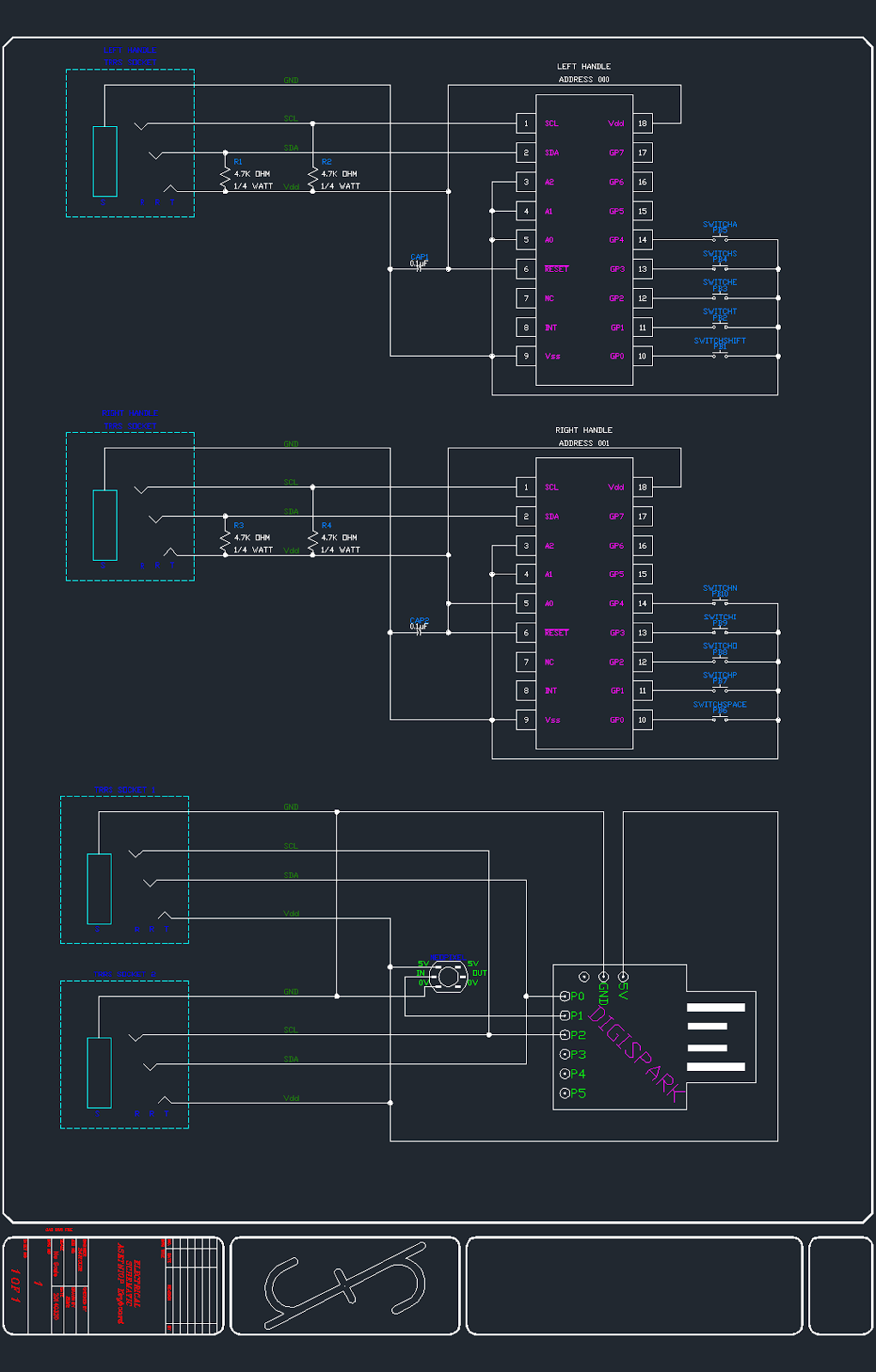 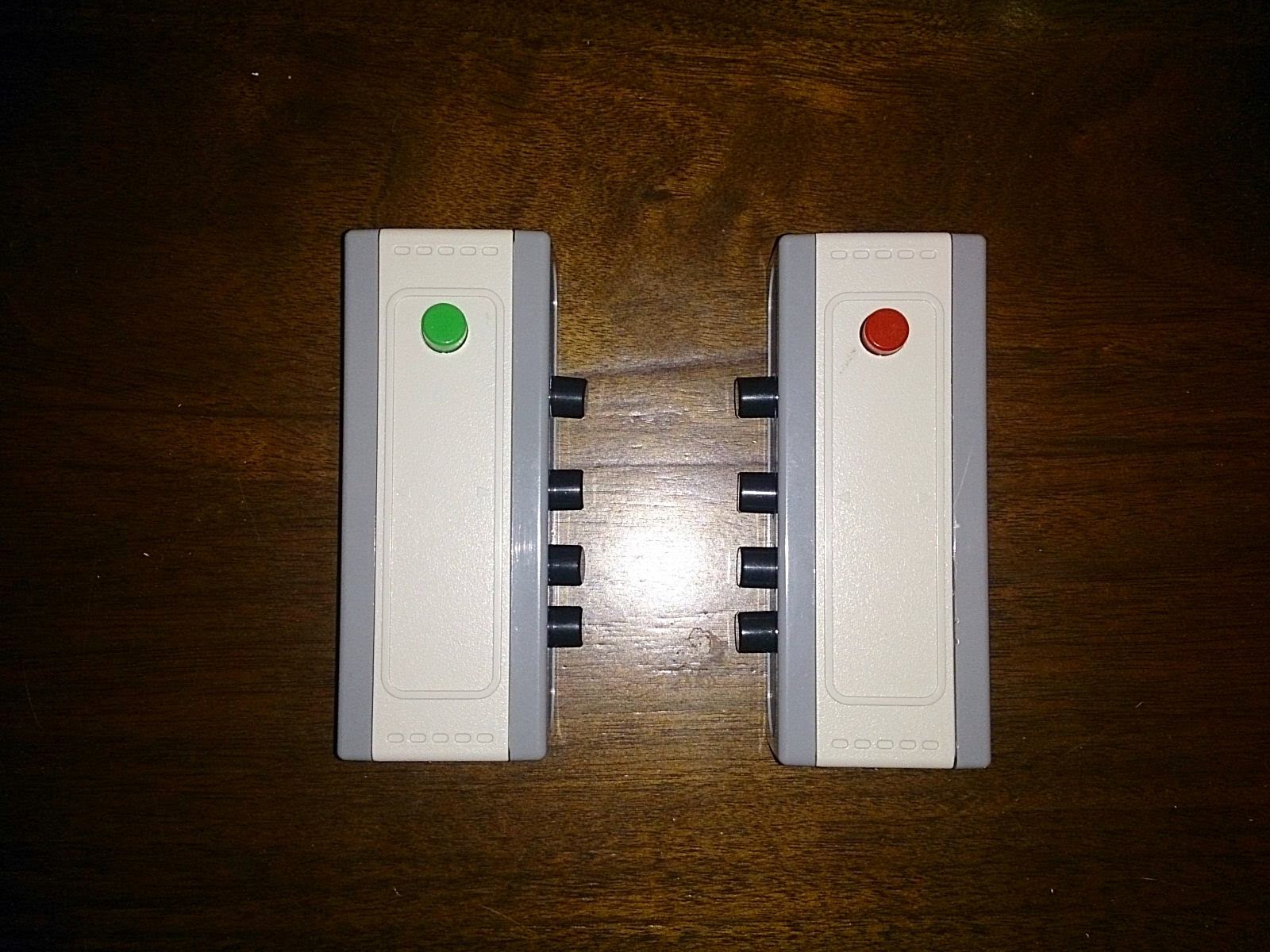 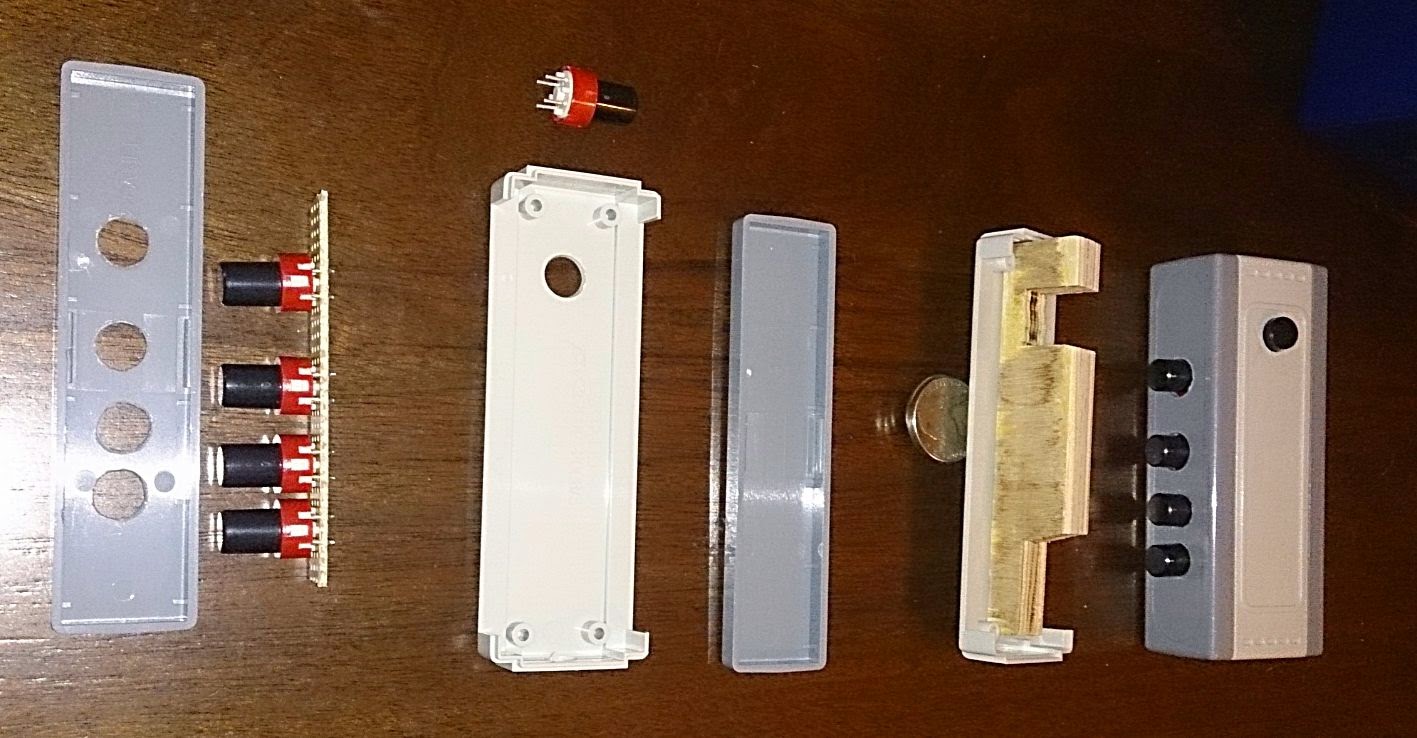