May 11, 2014
When I browse sites like Instructables I see projects that are underbuilt.  What I mean is that they are flimsy or unsuitable for their purpose.  Mostly these are built by kids and I did the same thing when I was young.  If someone posts a homemade pogo stick that uses 1/2" PVC as the shaft you can bet it wasn't designed by a mechanical engineer.  This guy built an industrial strength pogo stick for part of his master coursework.

Of course, if a thing can be underbuilt things can be overbuilt.  A simple project can get out of hand.  When an aluminum case is all that's needed it is overkill to have a custom case printed in titanium.

I think it's safer to err on the side of overbuilding but when a project becomes cumbersome it may be time to reevaluate what's necessary.

Enough background.
----------
A piece of wood was selected to become the long version of the stand.  It may have been from the same project as the first piece of wood but it is unknown since they were both from scrap wood at the hack space.  The wood was marked so the new piece would have the same cross-section but be longer.  The first cut was made on a radial arm saw and the second was made on a band saw. 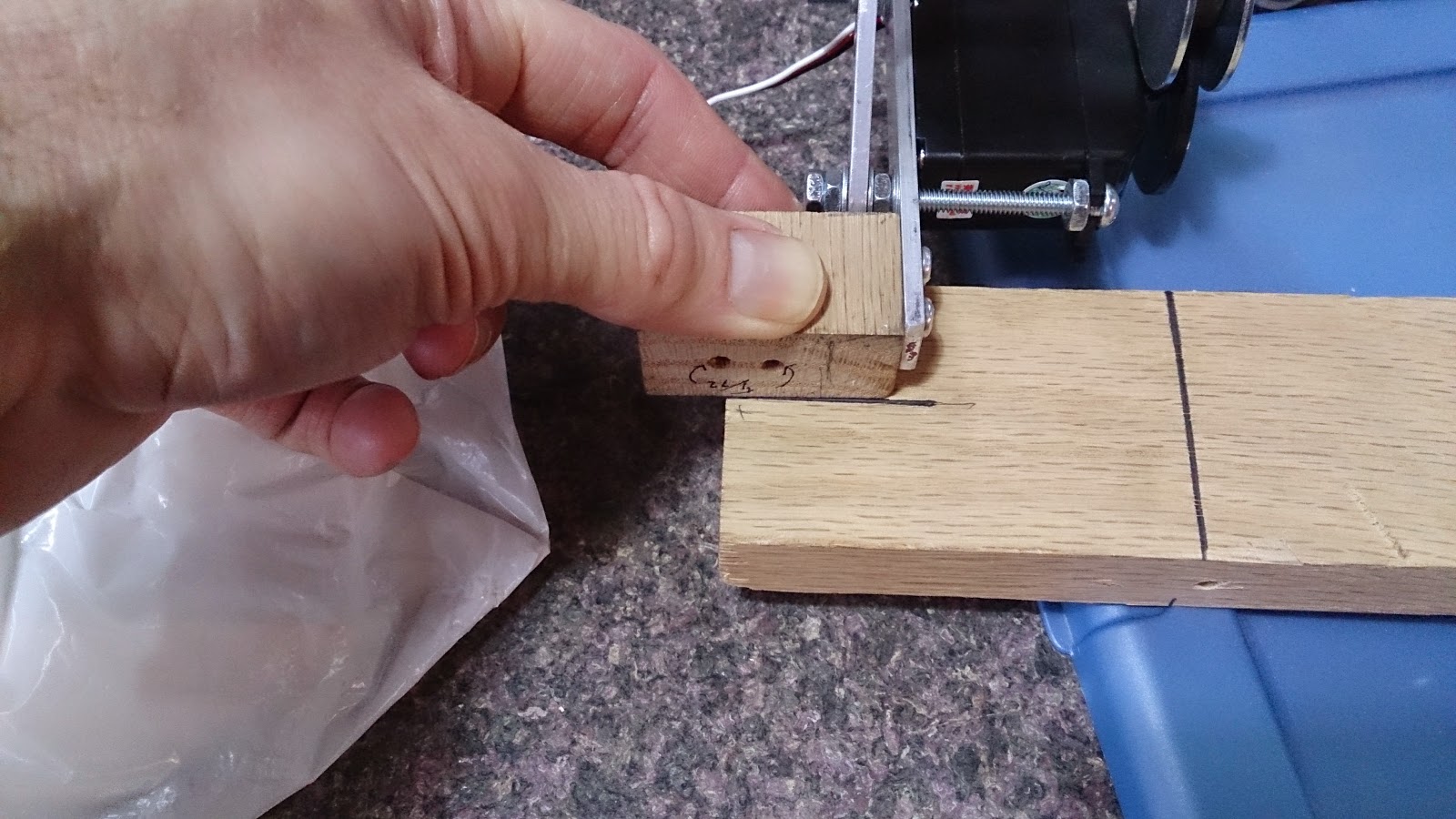 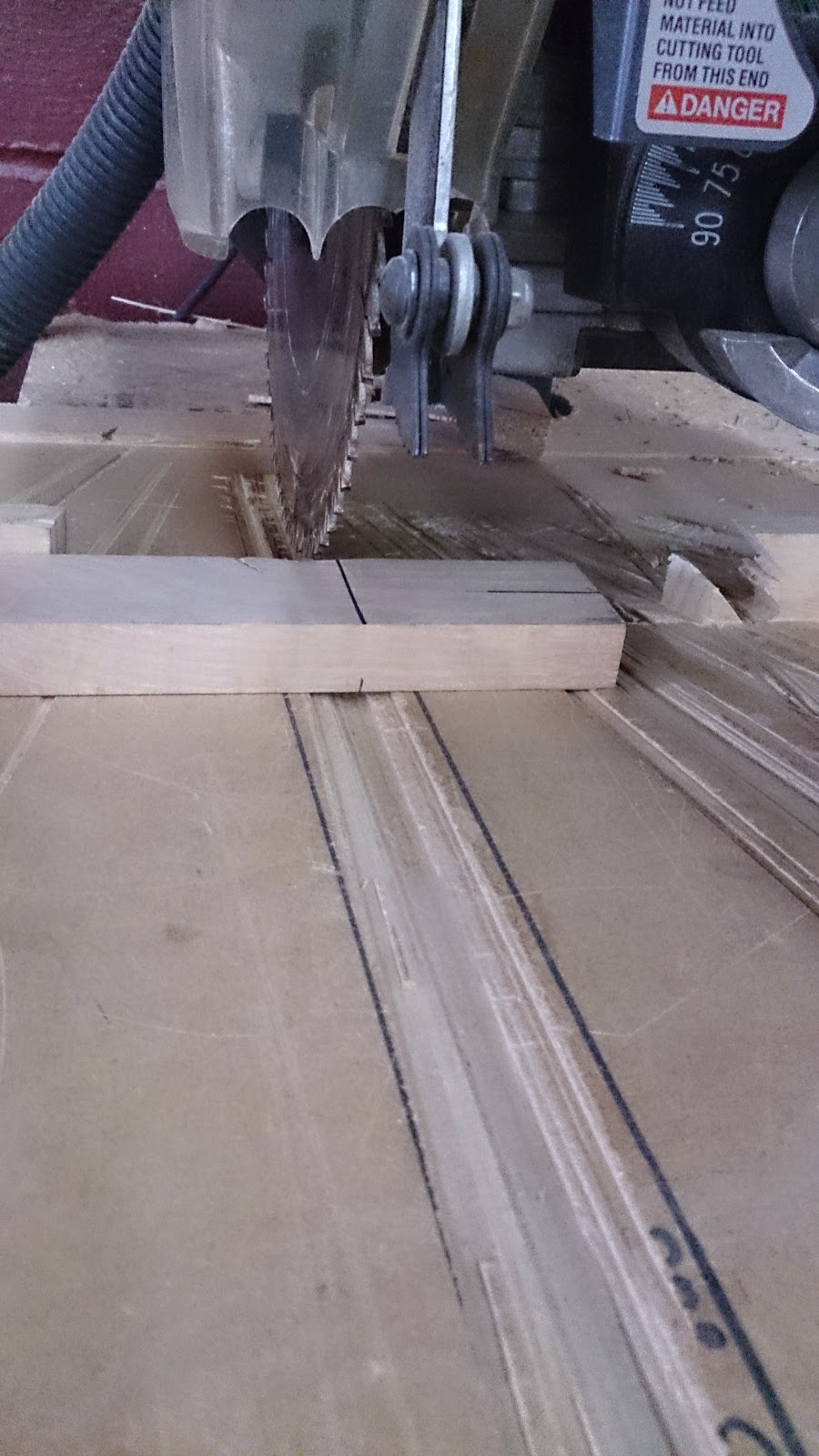 About to be cut on the radial arm saw 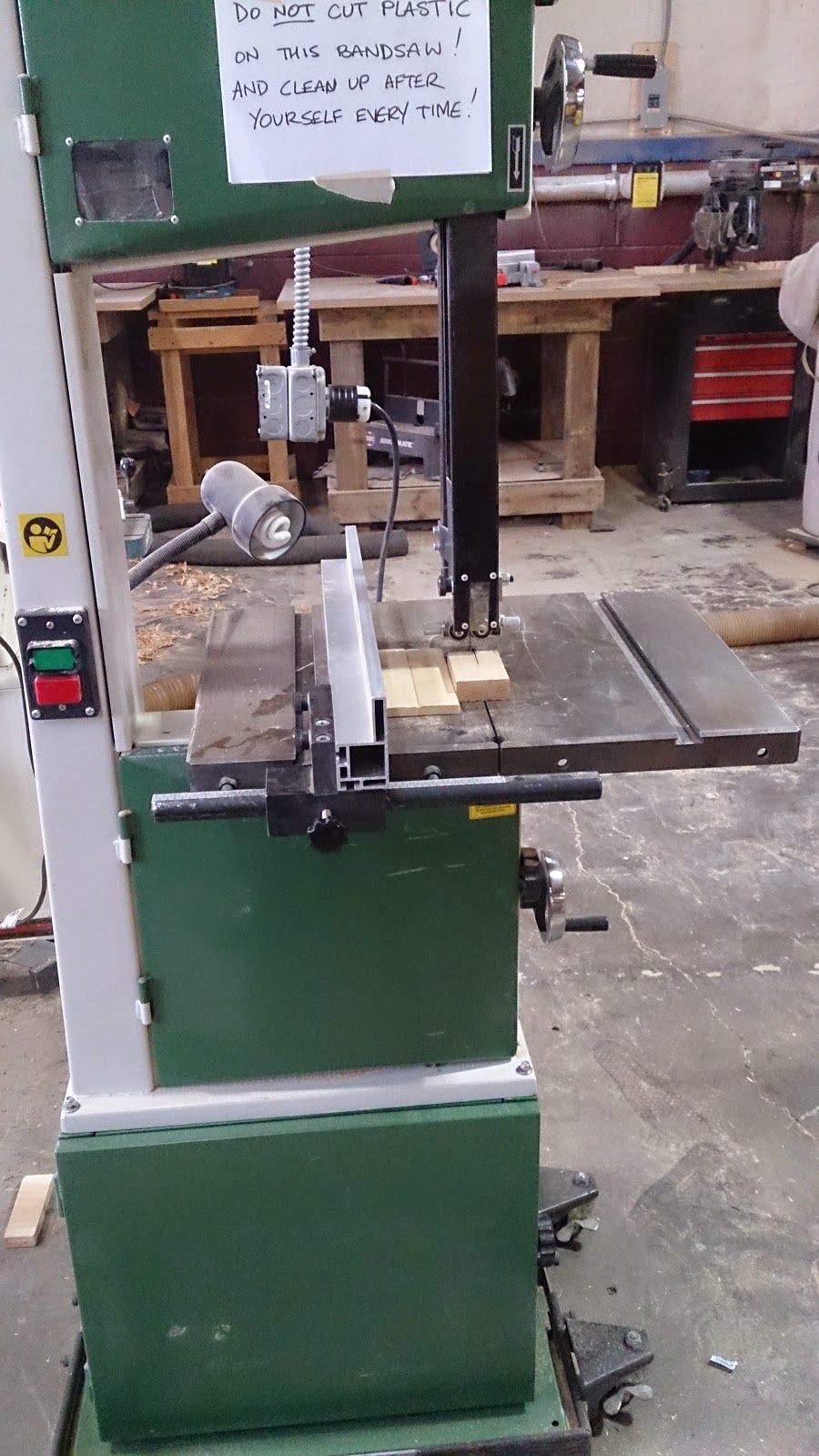 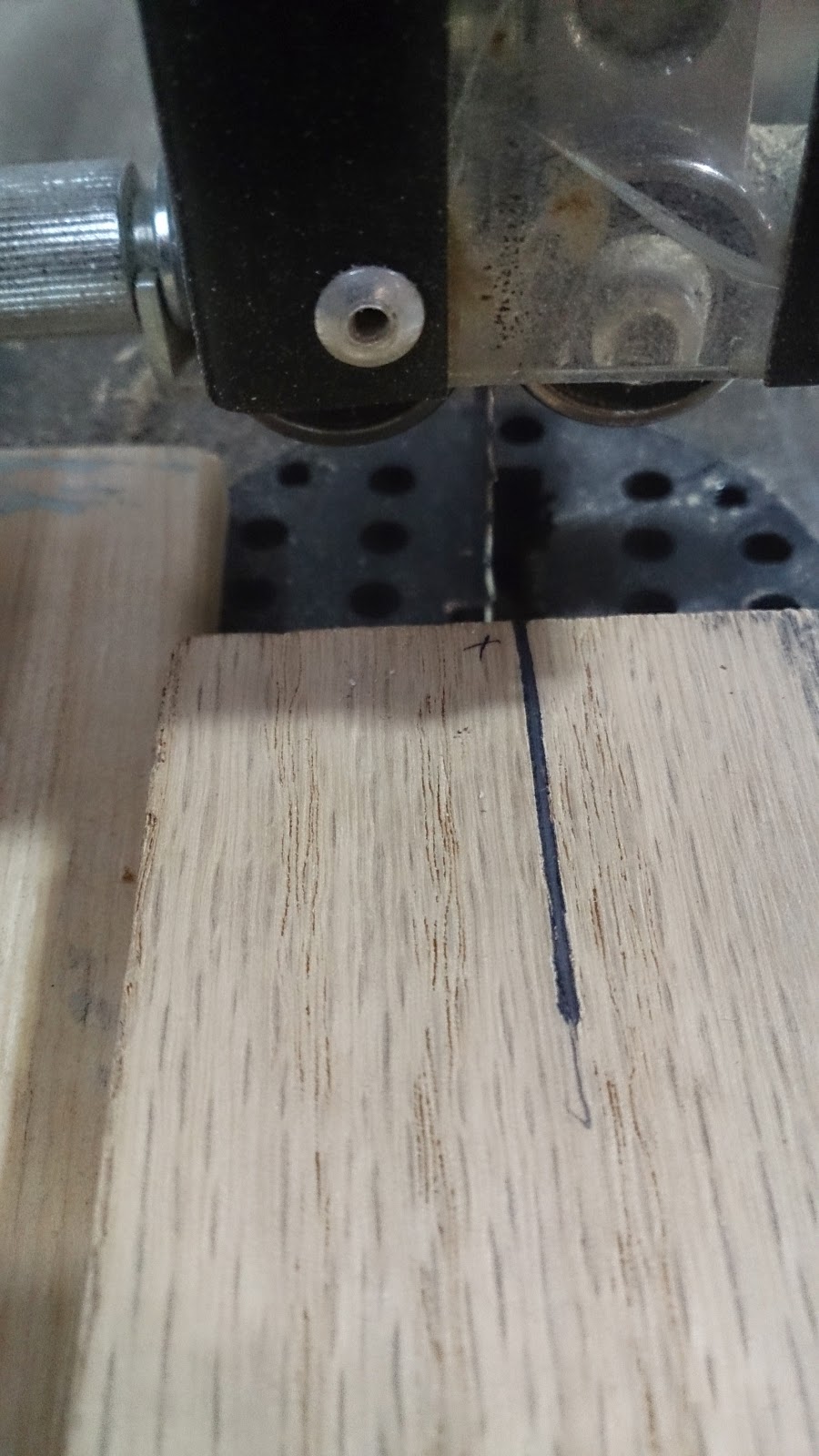 The small "x" on the wood designates that side as scrap 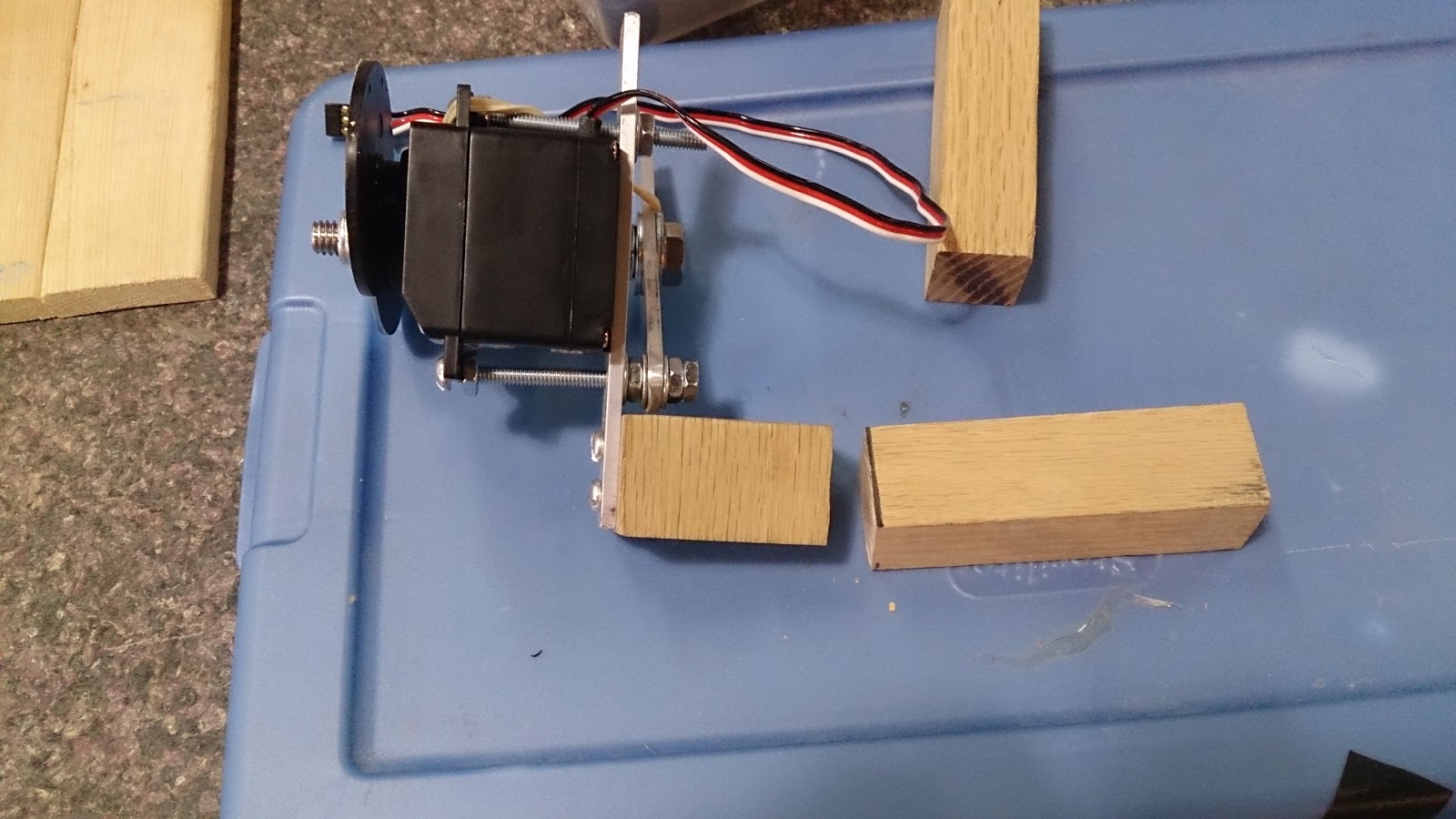 The wood is cut to the same cross section

The old stand was removed so the drilled aluminum could be used as a template for marking holes on the new stand for mounting.  The holes were drill to 3/32".  The new stand was screwed down with the aluminum screws from before but one became unusable and was replaced with a brass screw. 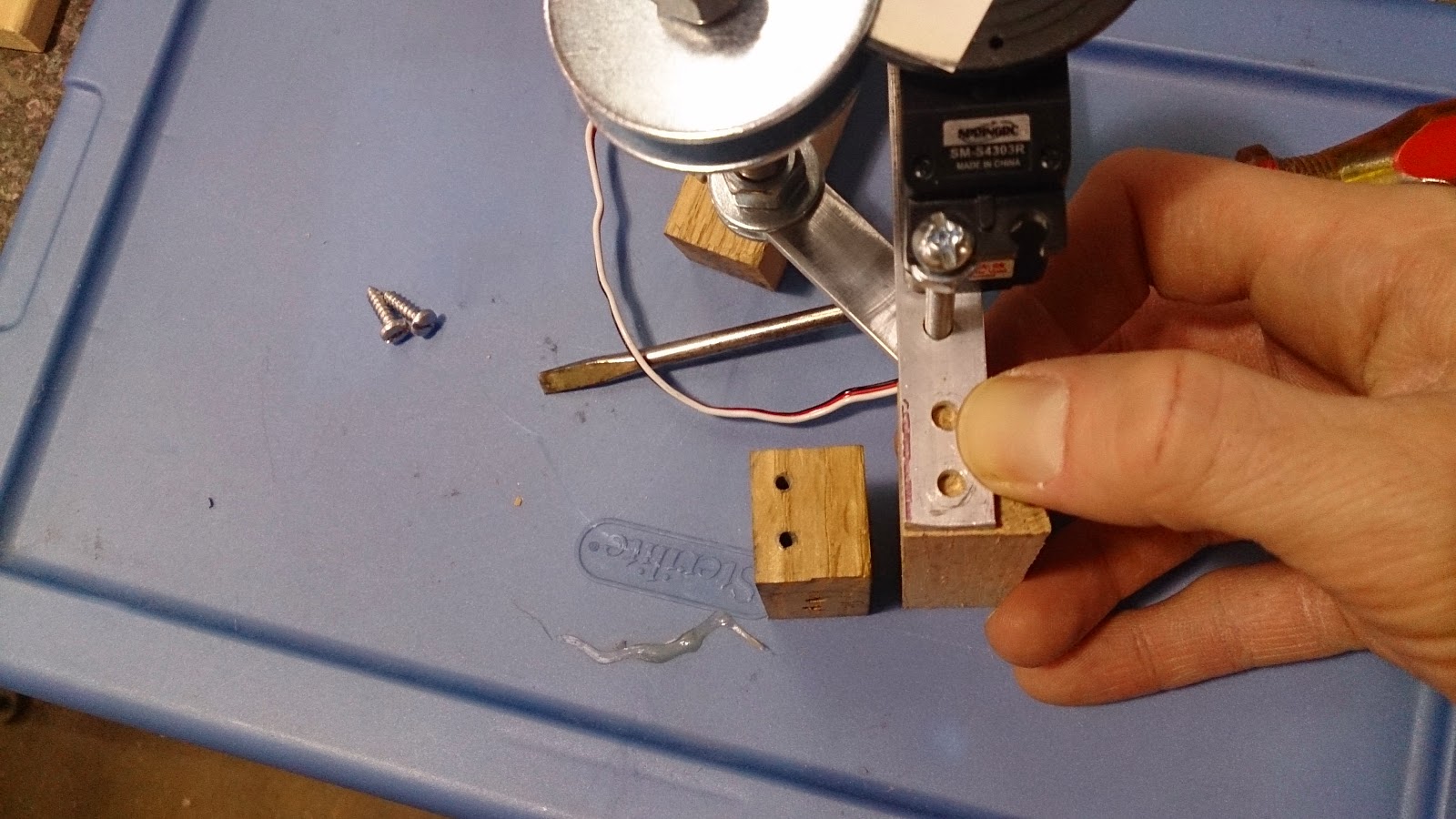 The drilled aluminum is used as a template 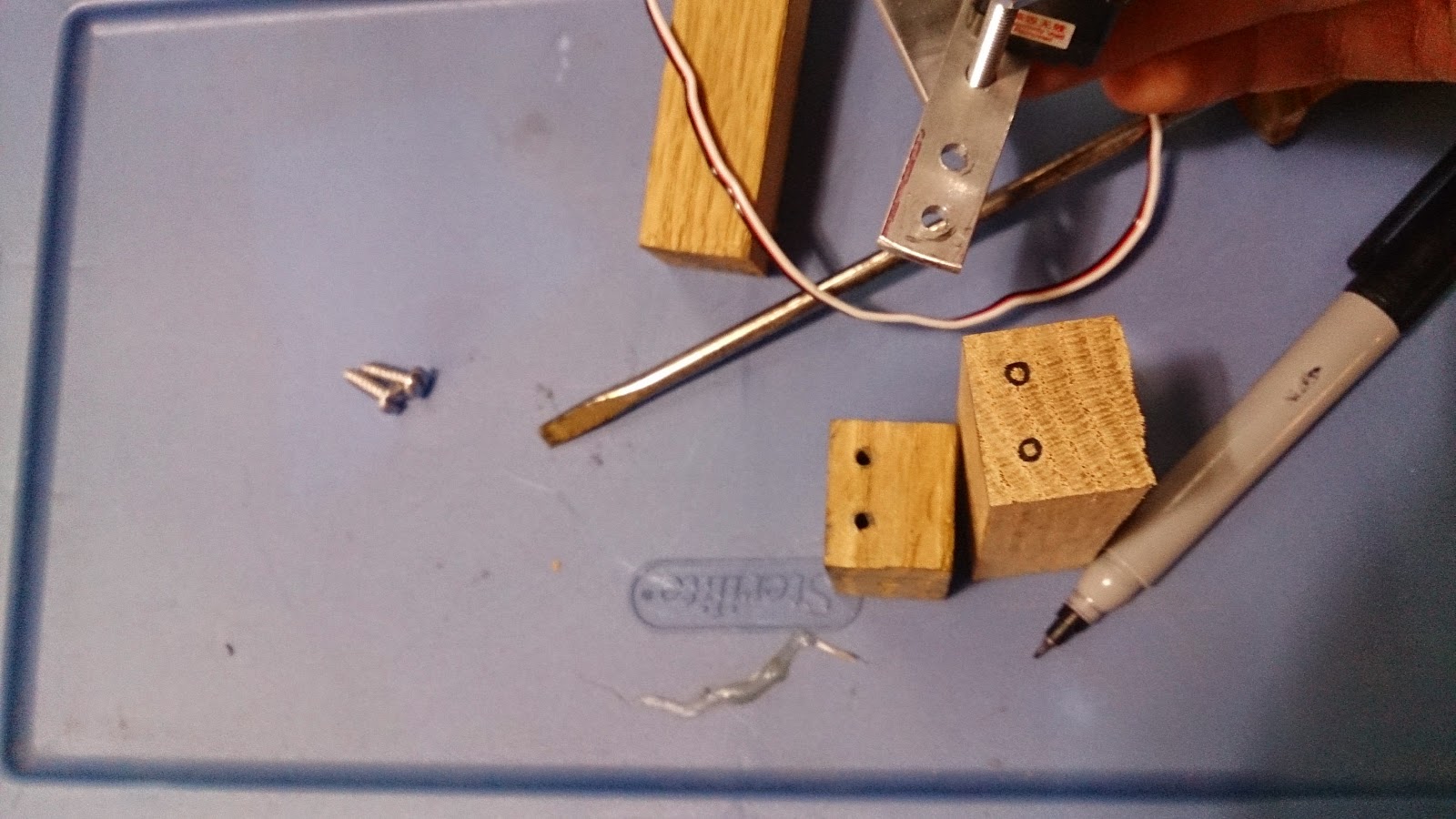 The holes are marked with a Sharpie 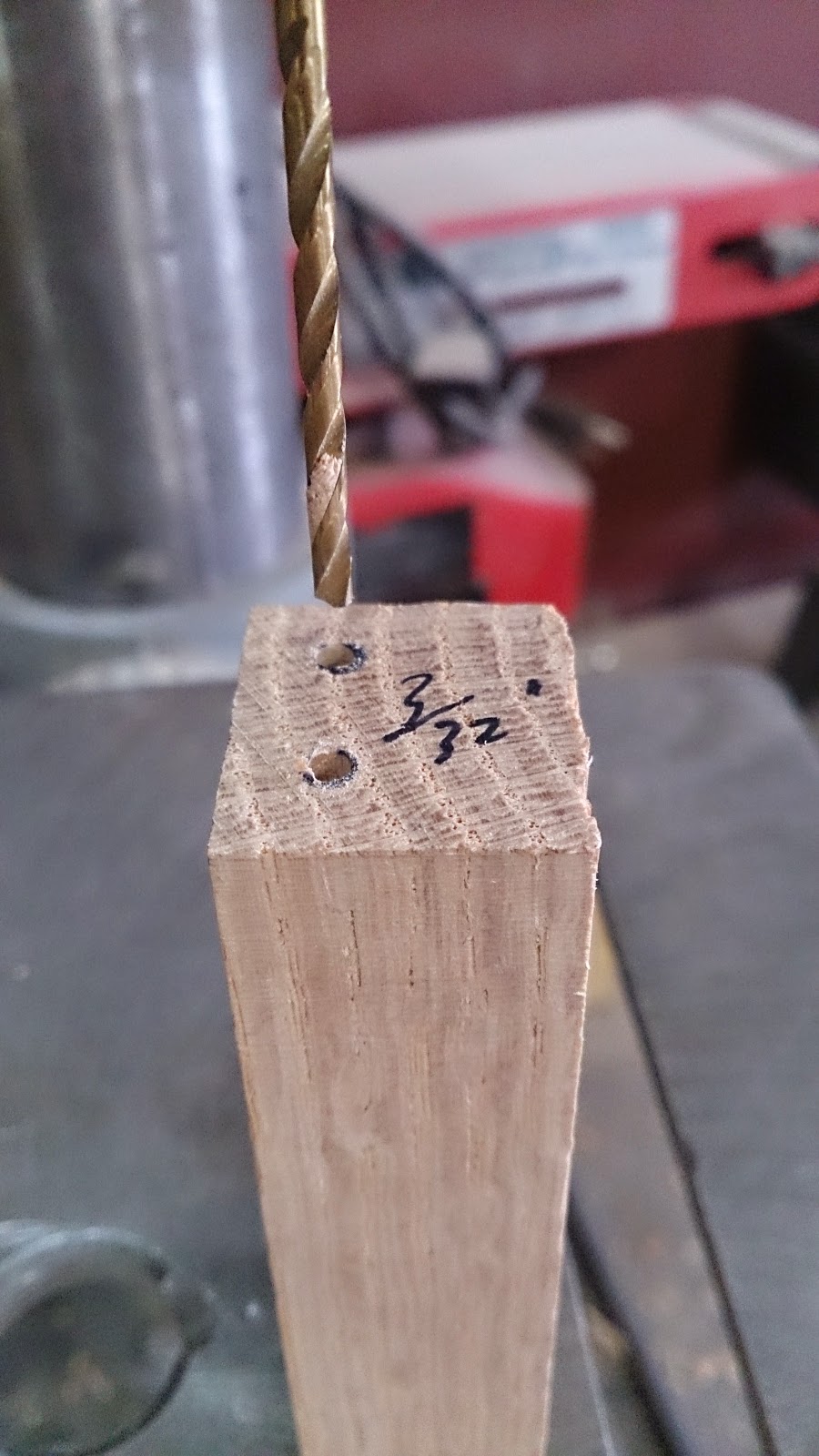 The marked holes are drilled to 3/32" 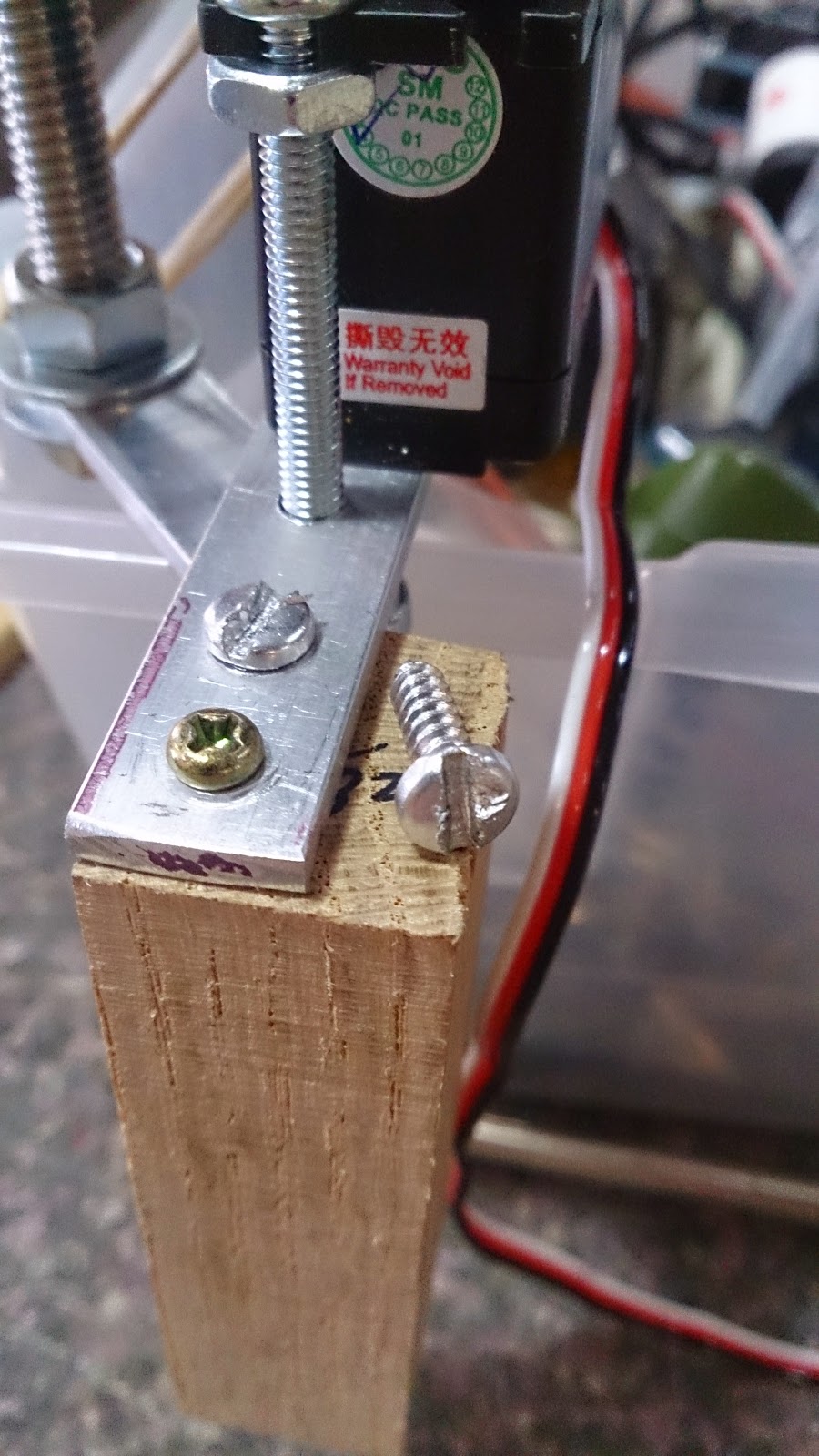 The new stand was too long for the pie tin and was shortened on the bad saw. 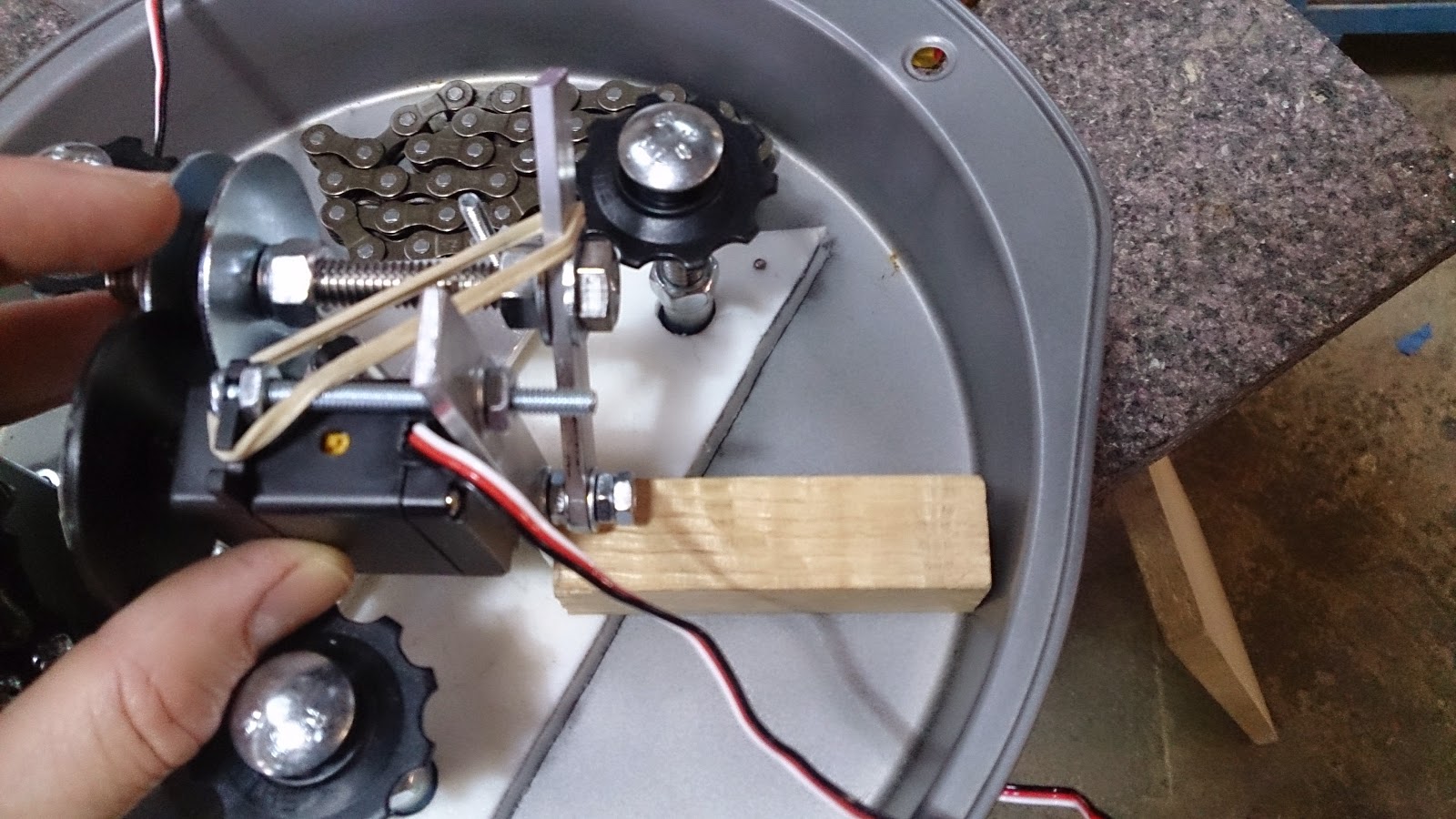 The new stand is too long 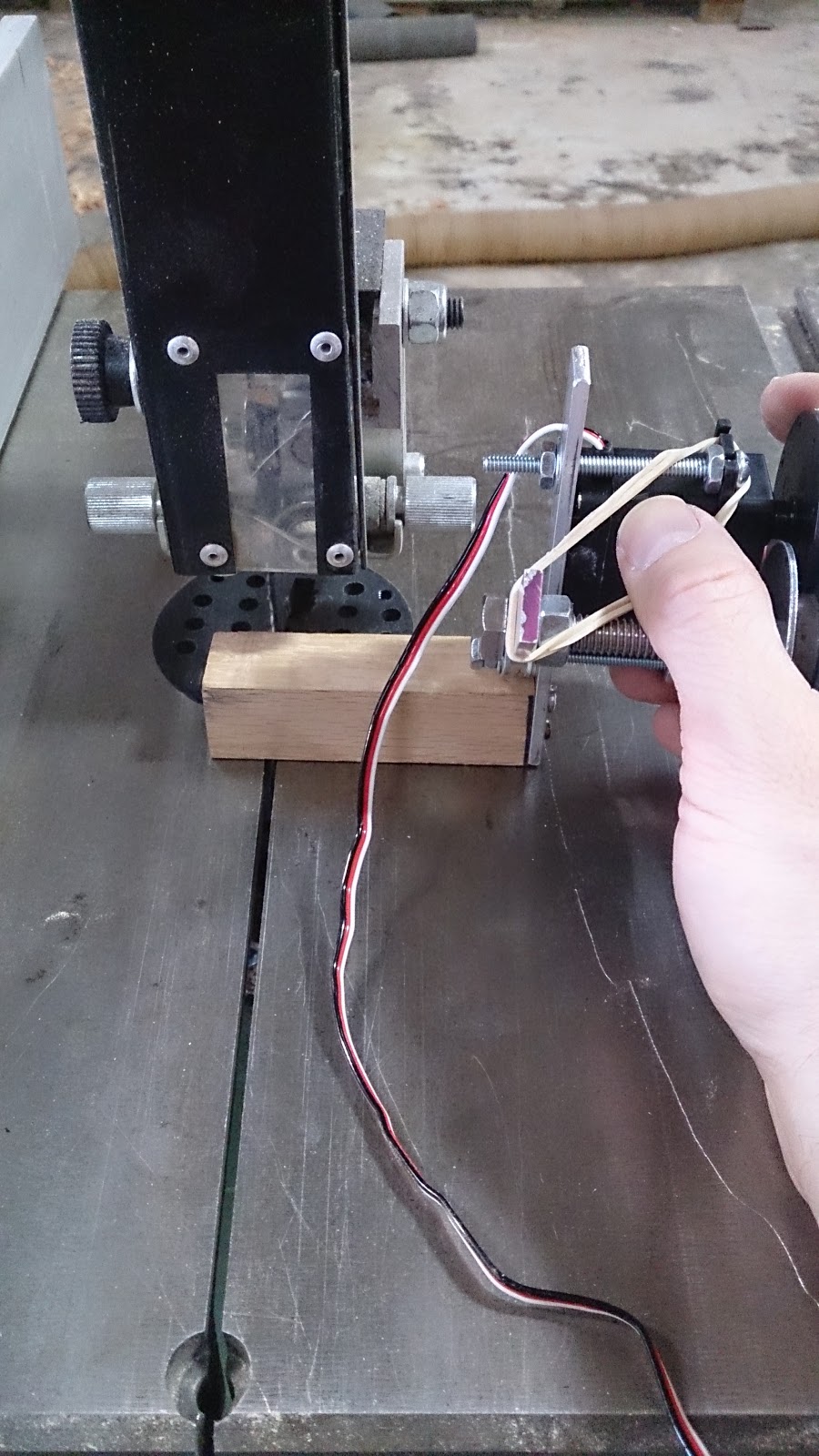 Since the new stand may be too short a piece of scrap wood was drilled to be a taller stand.  The was not installed. 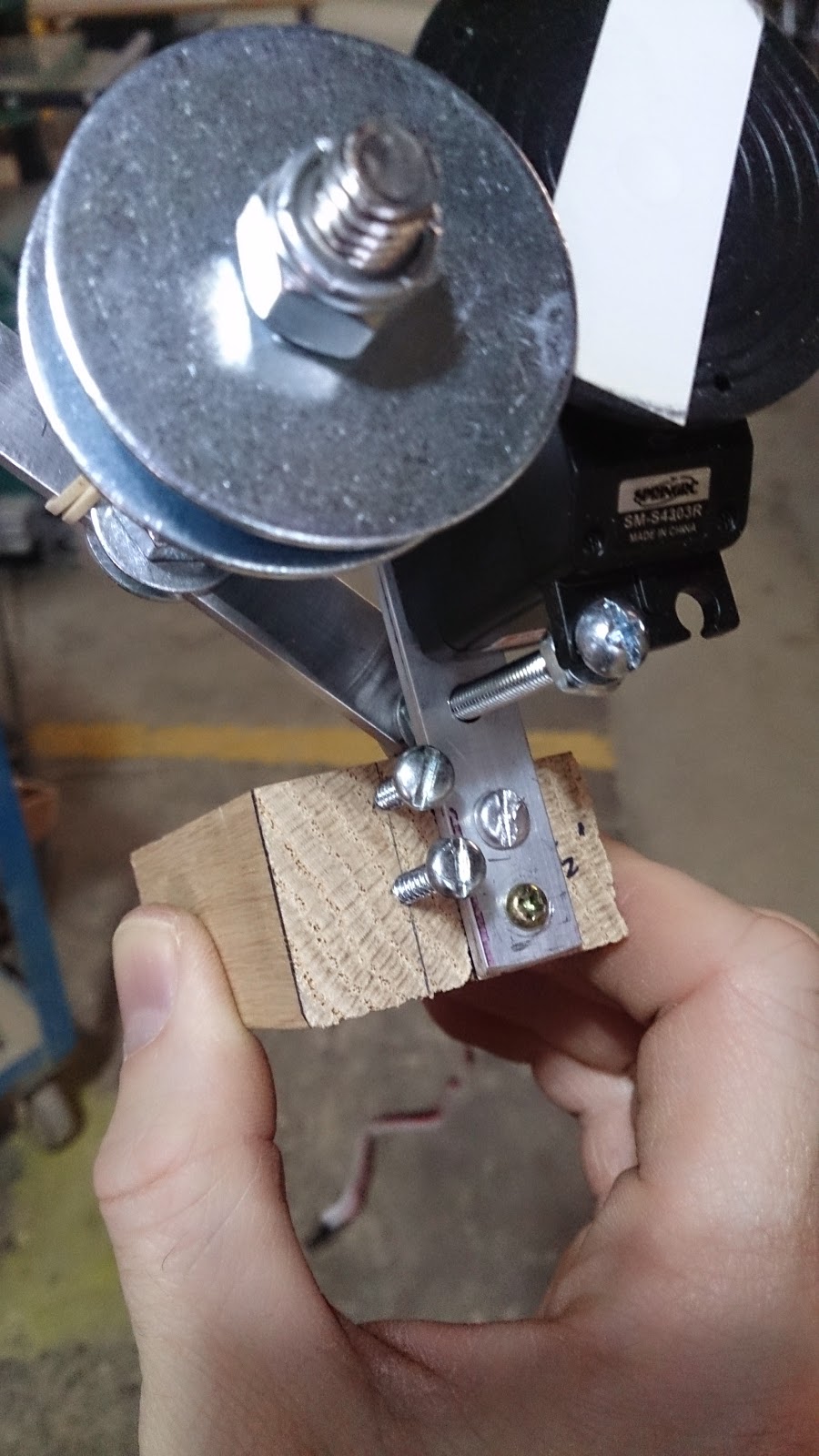 A taller stand with the holes drilled higher up 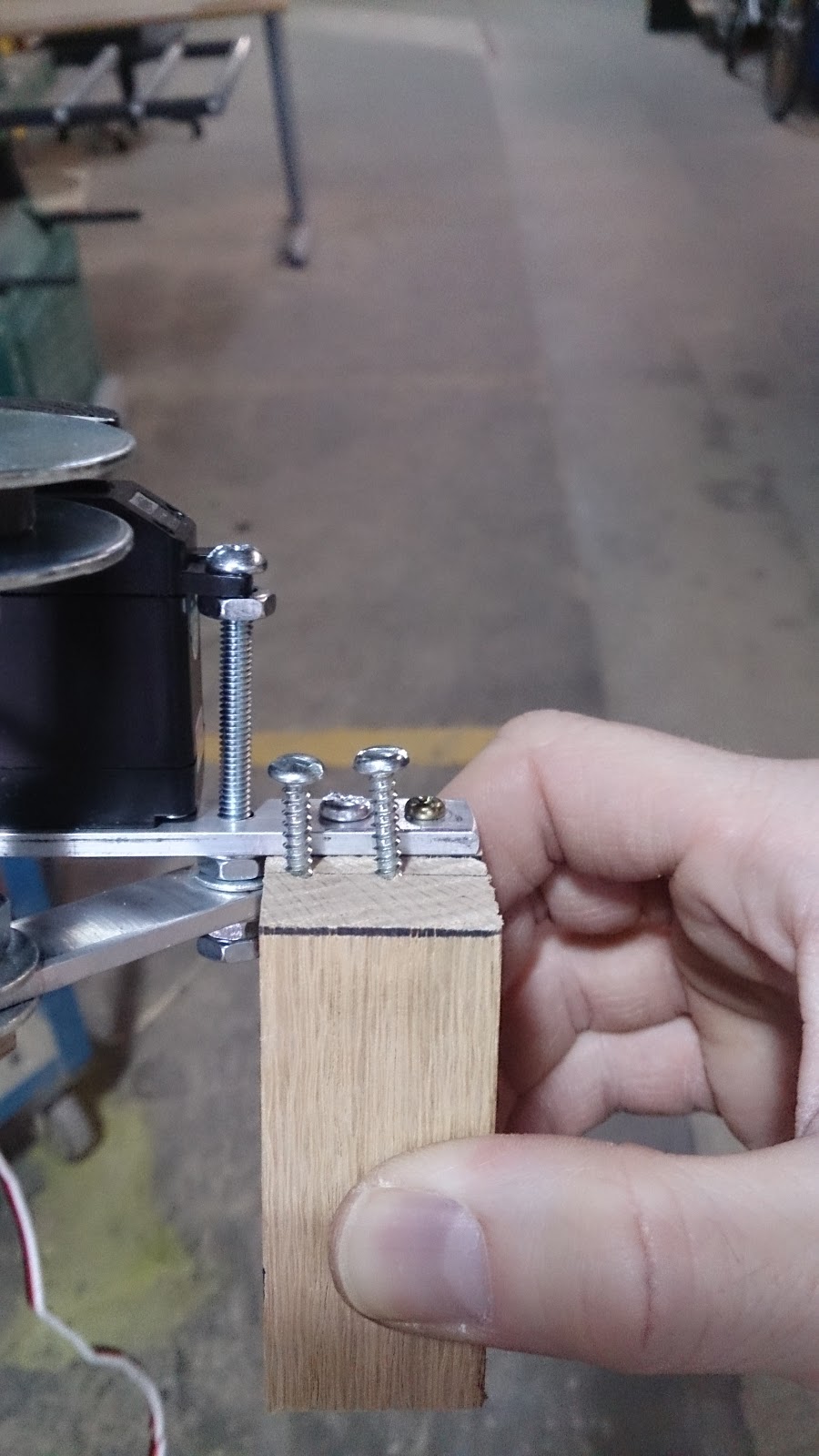 The screws are almost 1/4" higher than

Another piece of scrap wood was cut with a rounded edge so it could press against the chain to act as a chain tensioner. 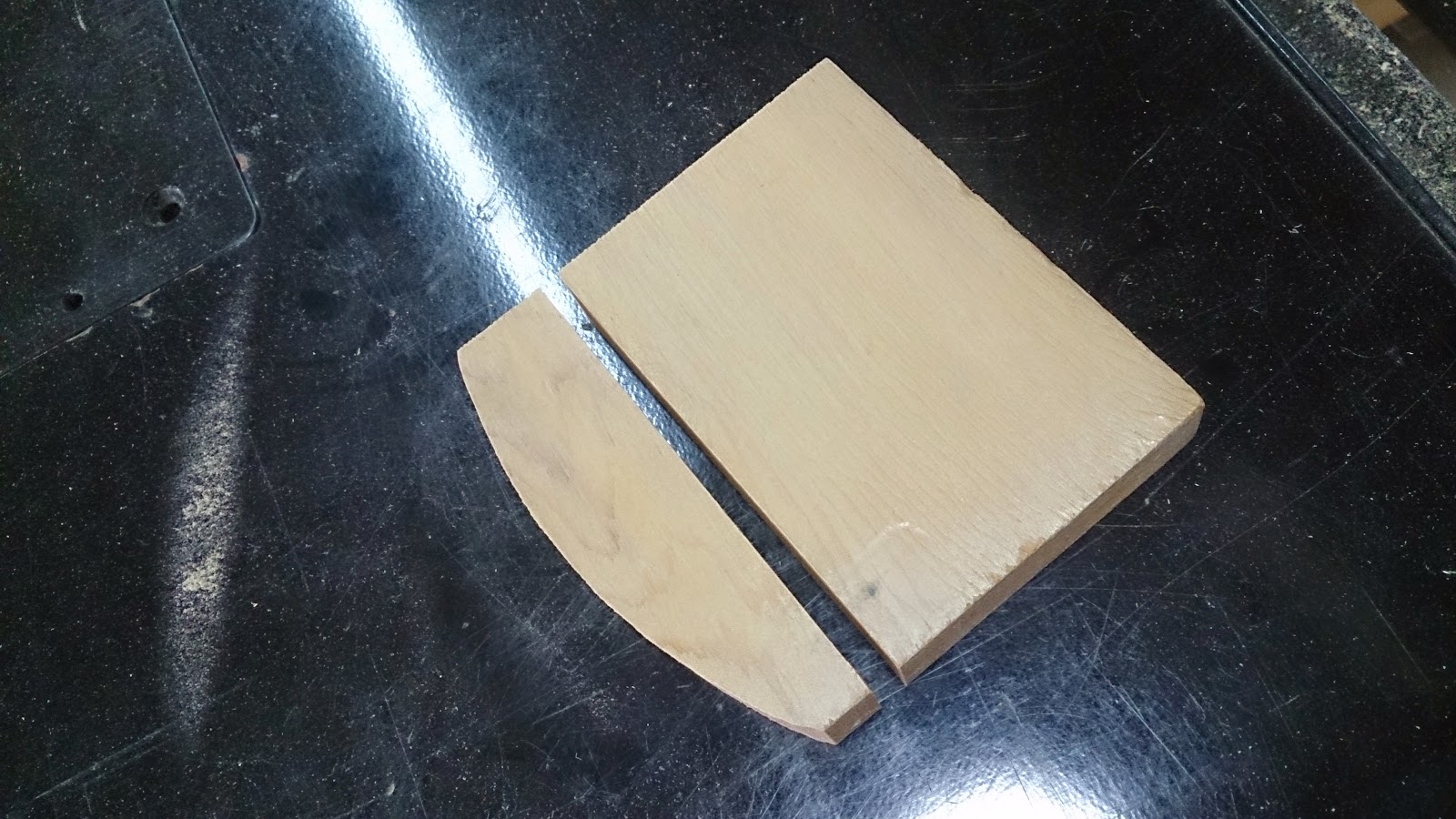 The rounded piece on the left will press against the chain

A piece of the cutting board was drilled and countersunk to act as a spacer between the new stand and the pie tin.  This piece will not be used if magnets can simply be attached to the bottom of the new stand.  The cutting board piece would be given blind holes and fitted with magnets if necessary.  The 5/32" holes were too large for the selected screws. 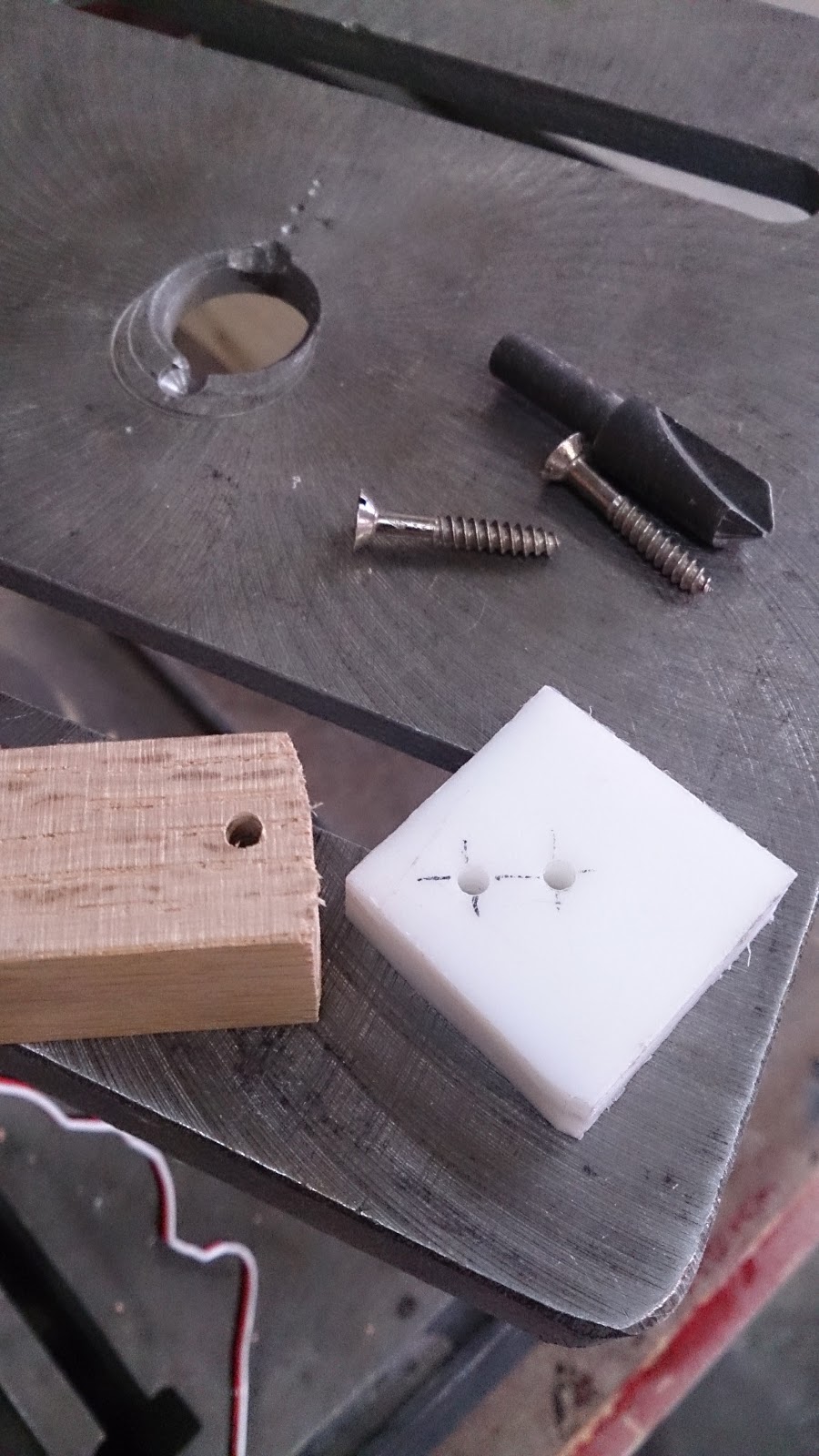 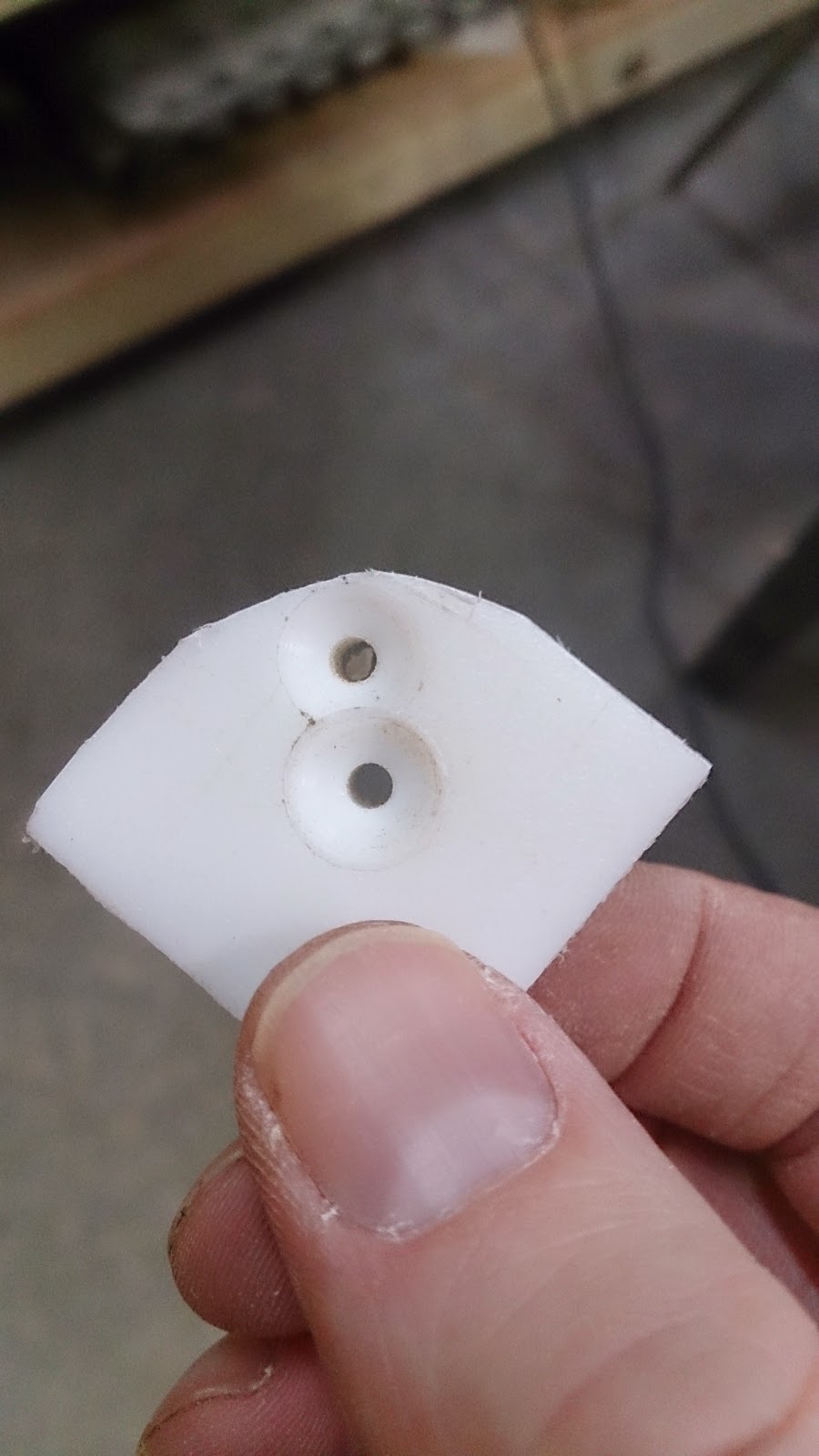 The cutting board was countersunk 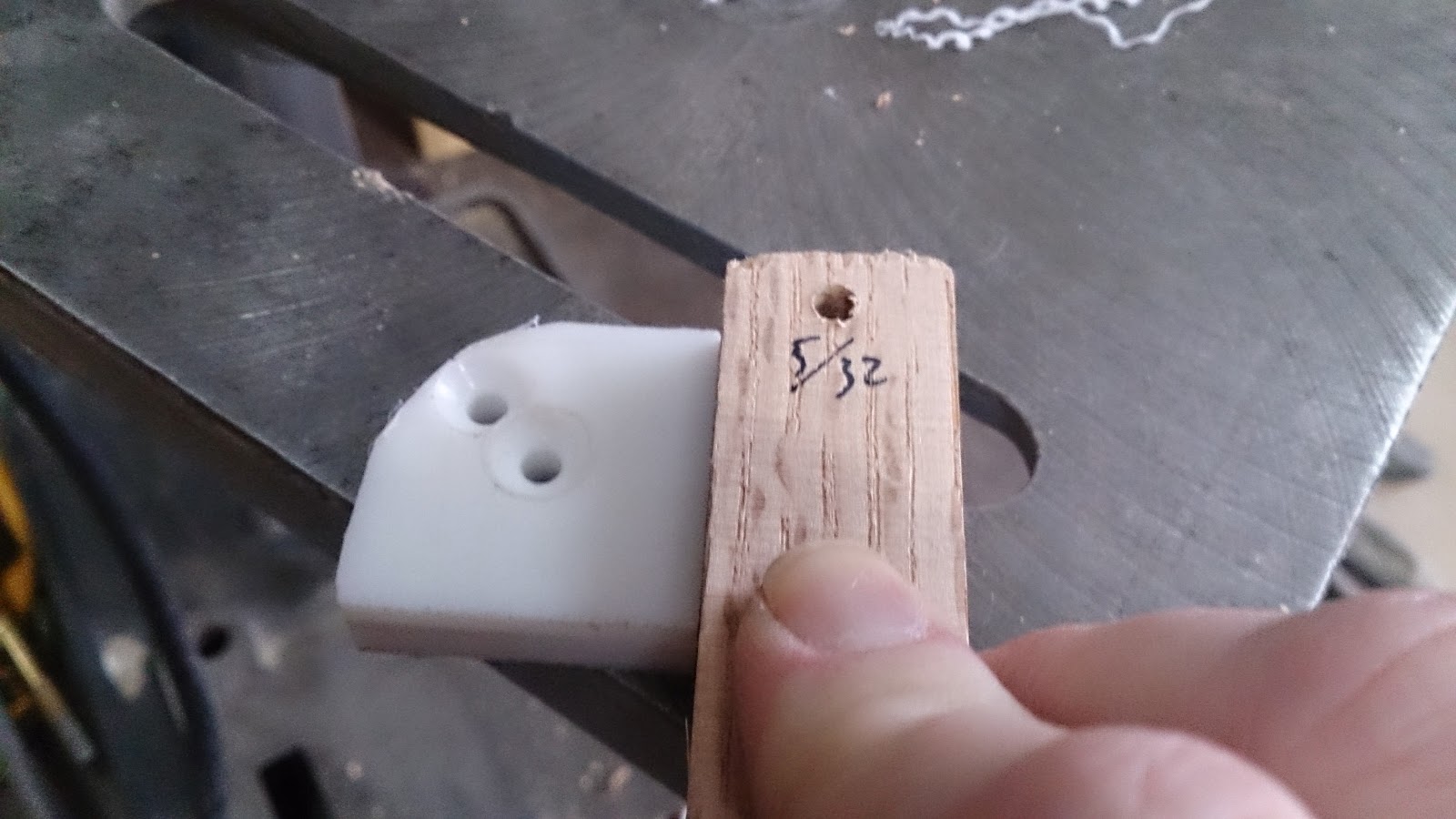 A single hole was drilled in the stand 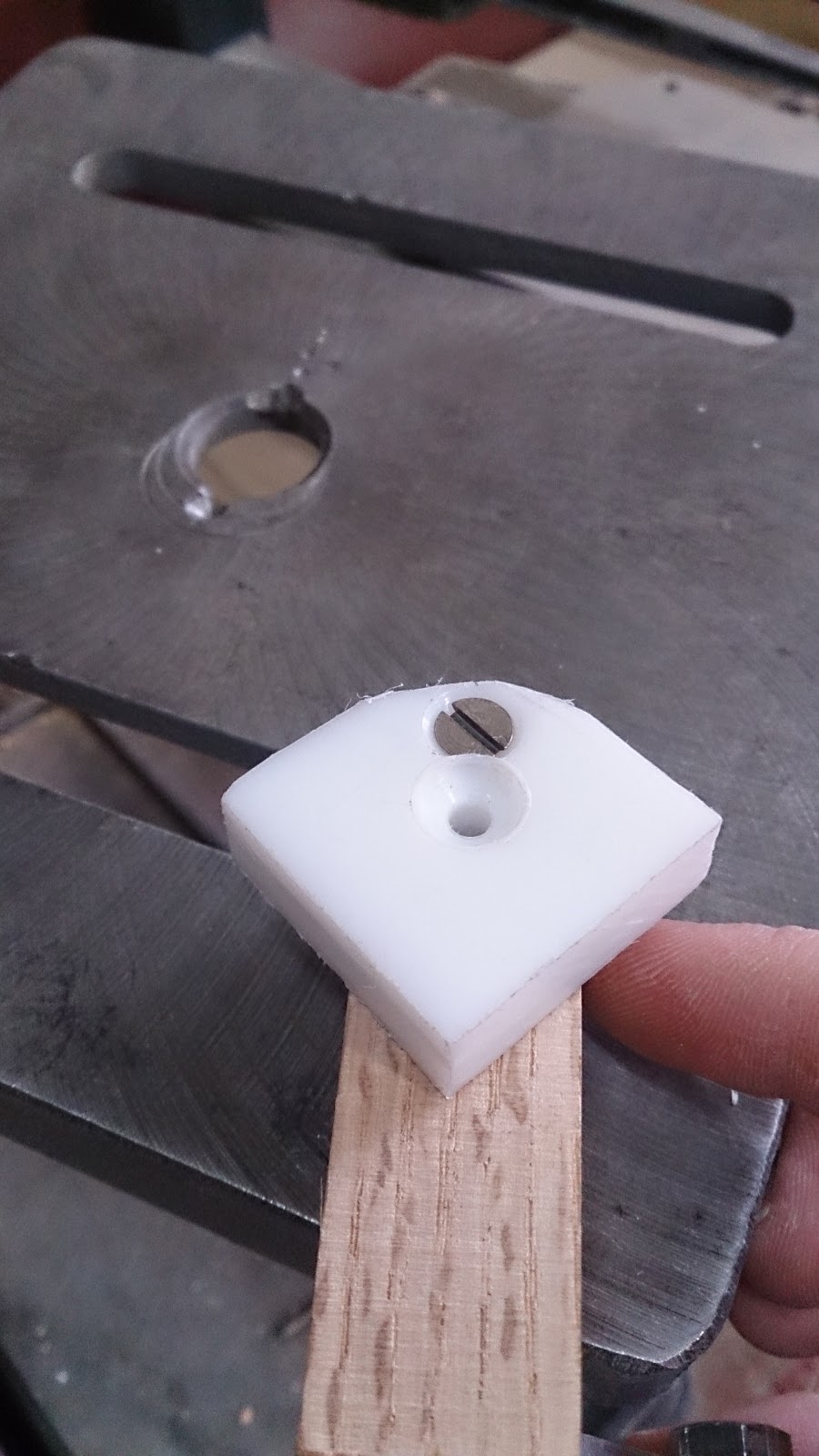 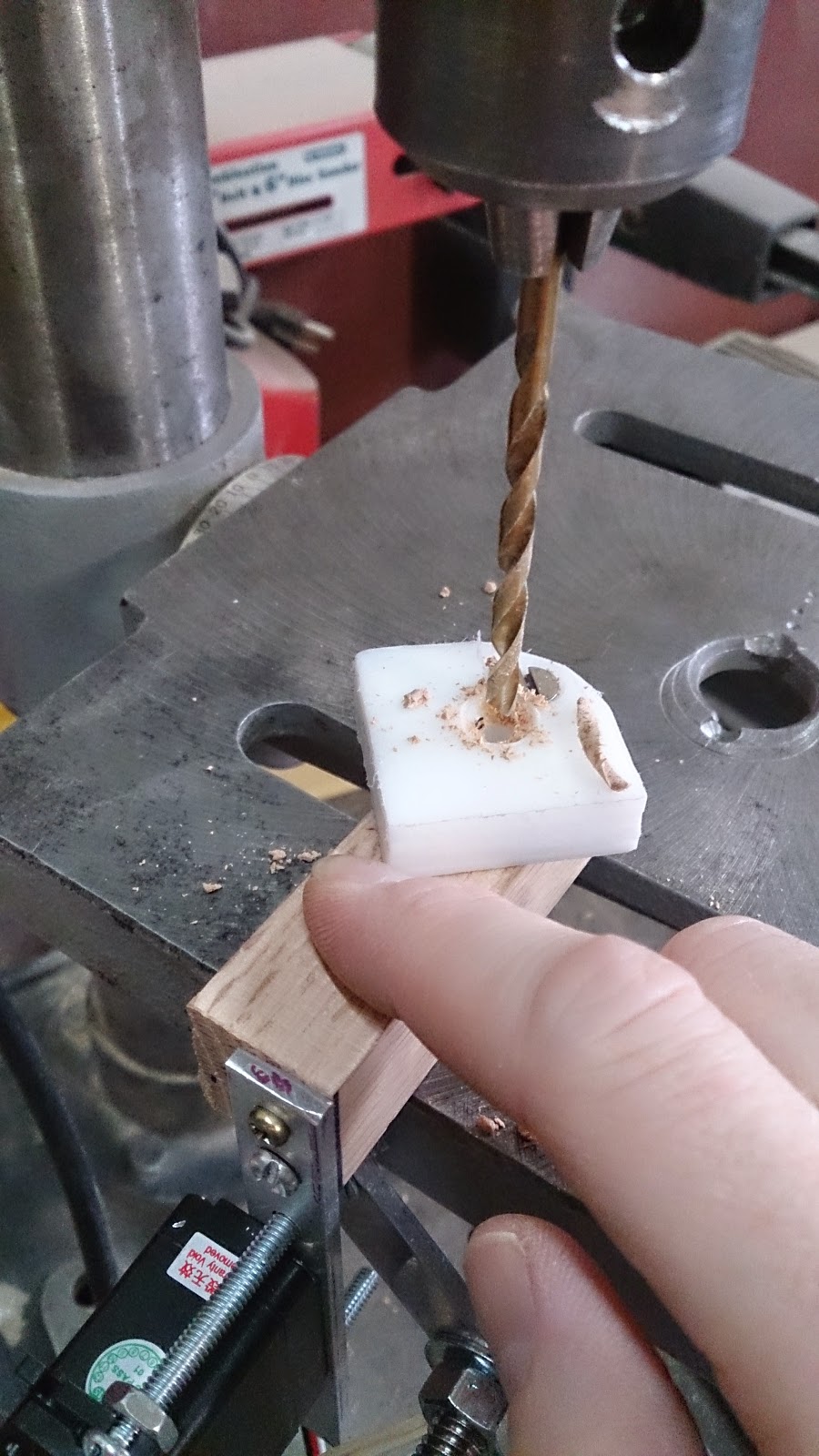 The second hole was drilled 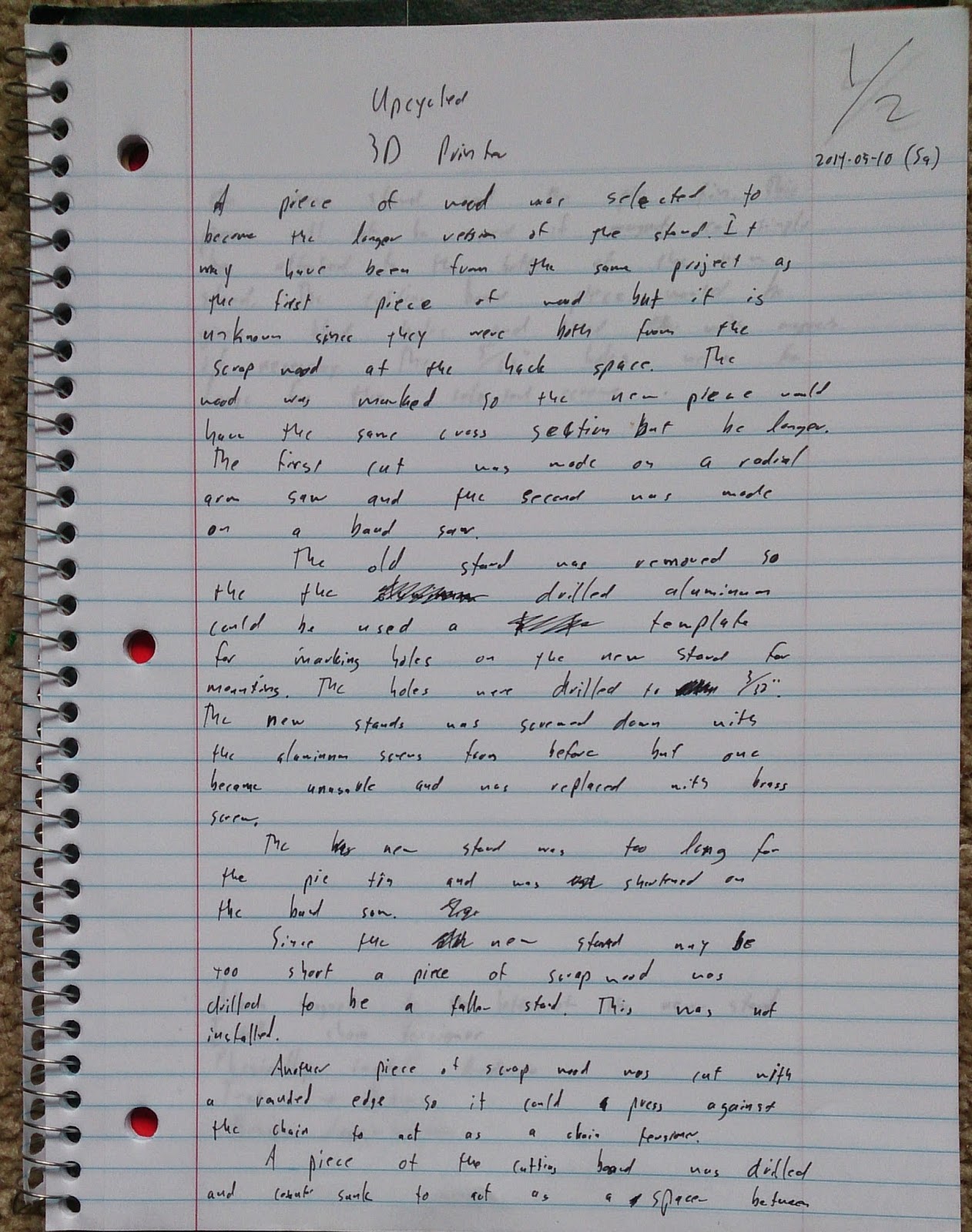 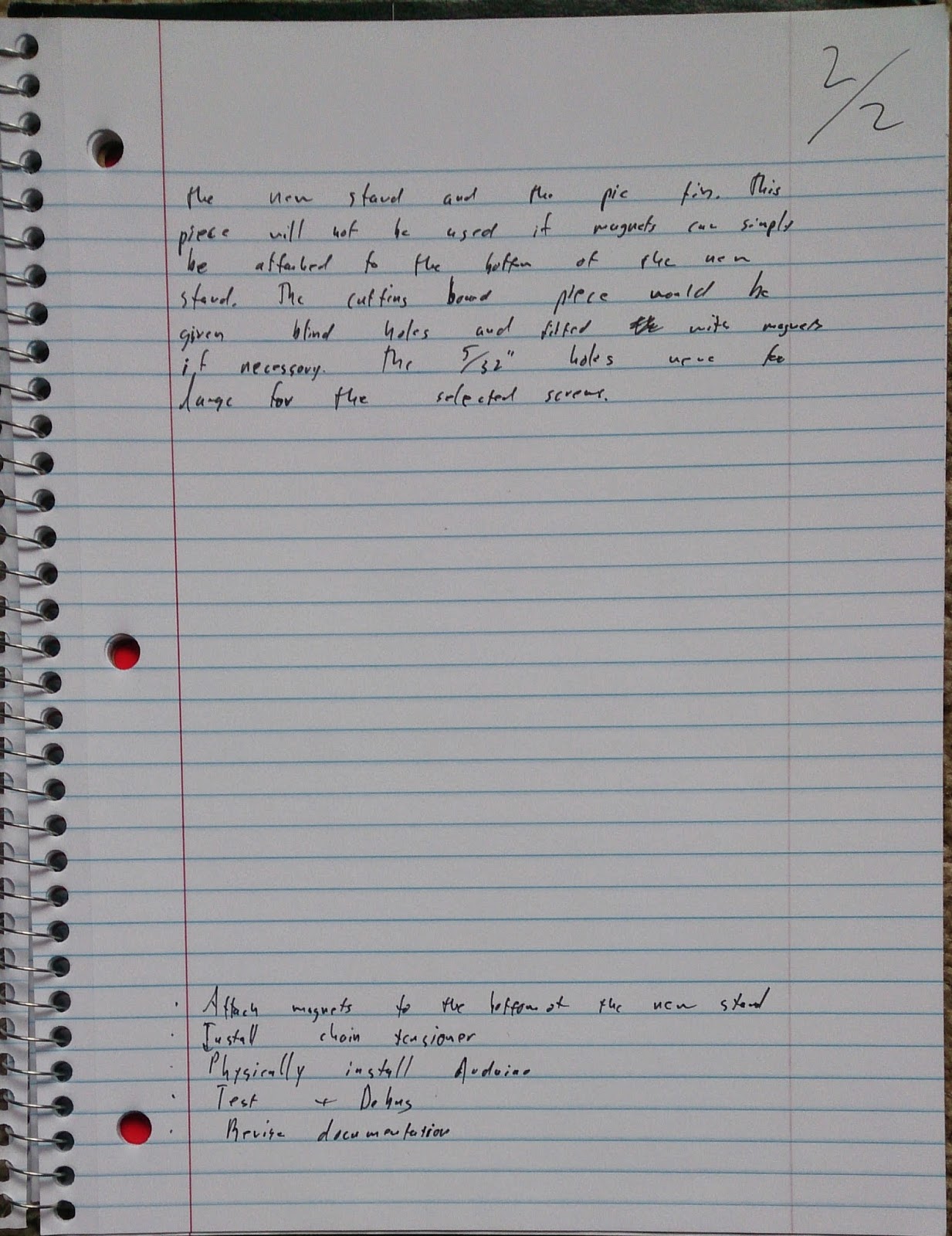