I don’t play many video games.  I don’t own any current video game consoles aside from a smart phone and the only game I regularly play is Ingress.  If you’ll play for my team I’ll gladly send you an invite.

If someone is going to throw edible meat away I will eat it because it’s wasteful to discard good food but otherwise I don’t eat meat.  Someone once told me that if 10% of Americans gave up eating meat we could fill the food deficit of the world.  It takes roughly 10lbs of grain to raise one pound of meat so I can believe it.  I’m not going to campaign for vegetarianism but that’s what prompted me to give up meat.  I still eat fish.

I write the date as YYYY-MM-DD because when it’s sorted by a computer it will always align chronologically.  Plus it’s the ISO standard, which I’ve mentioned before.

At work I have a G13 macro keyboard which I bought myself in order to have drafting commands instantly available rather than typing each time.

Enough background.
----------
The jar had been emptied to allow the cork to dry since it seemed to be deteriorating in the tap water.  The cork may need to be coating in polyurethane.  The jar and contents were allowed to dry overnight. 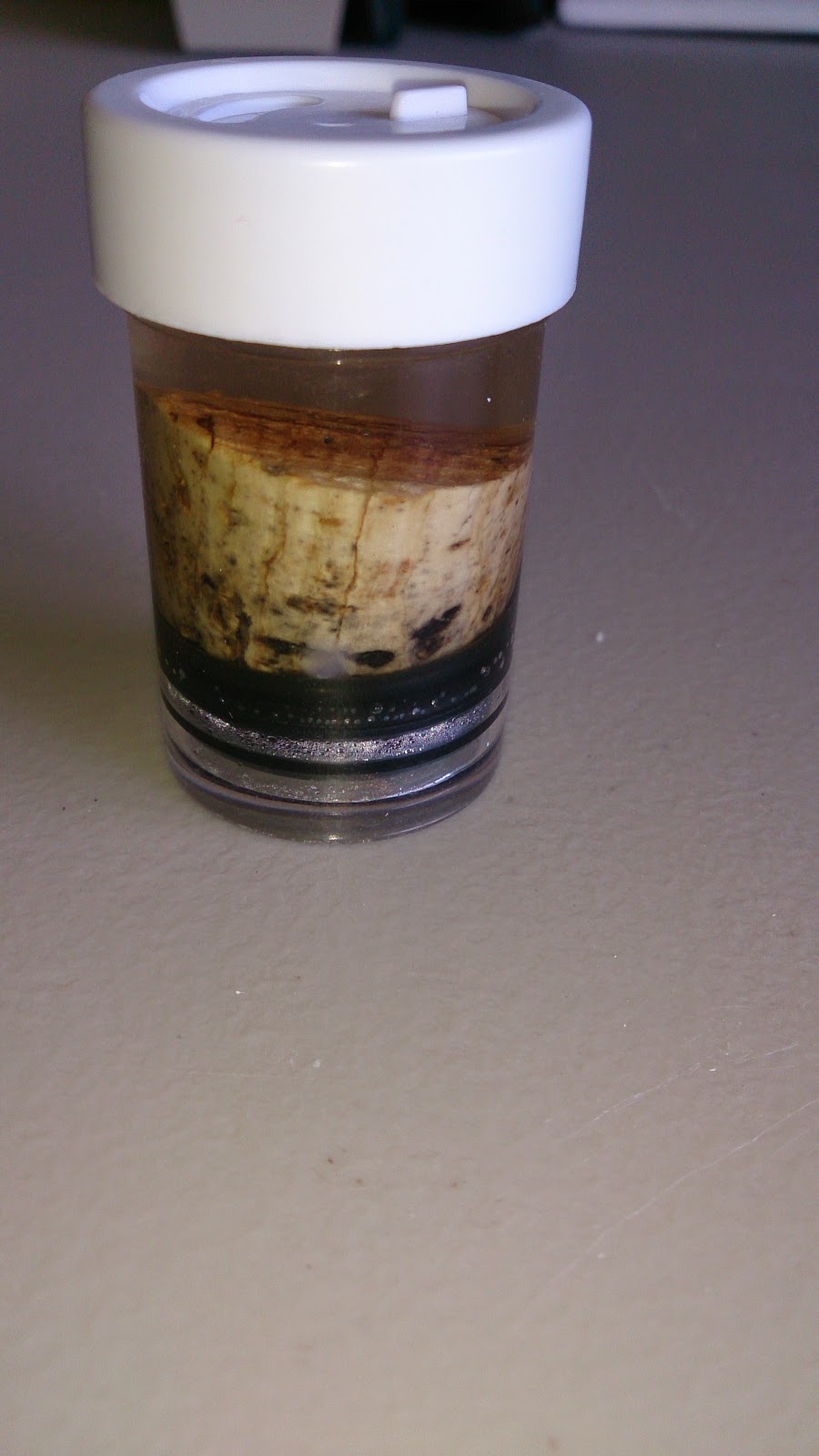 The O-rings were put back into the jar in order to gauge the height where the whisker will go.  The height was marked with a permanent marker.  The plastic seemed brittle so drilling was a poor option.  A heated soldering iron was used to make the hole by pressing the hot tip through the marked location.  The edges of the hole were bulged and smoothed with a flush cutting tool. 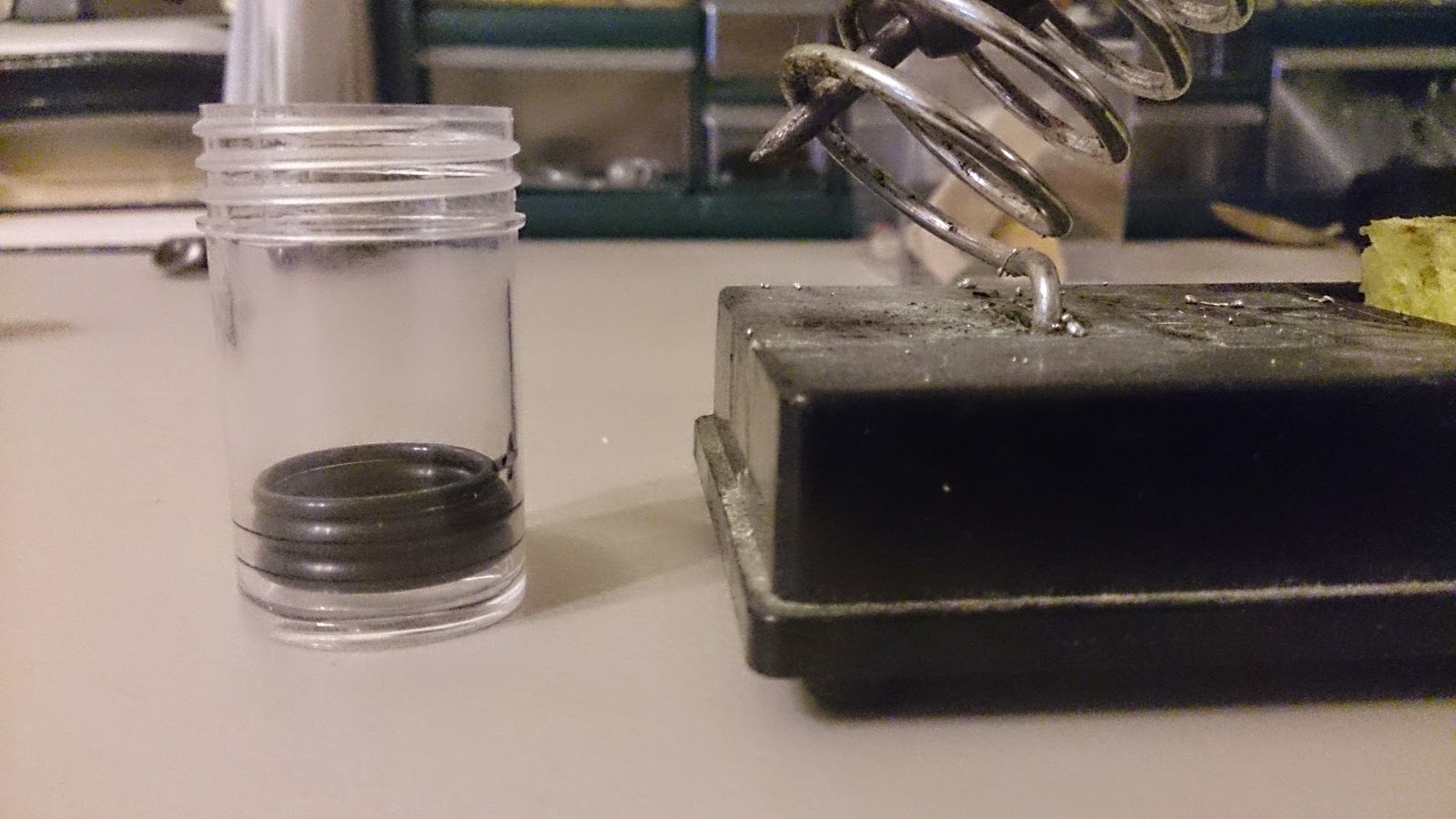 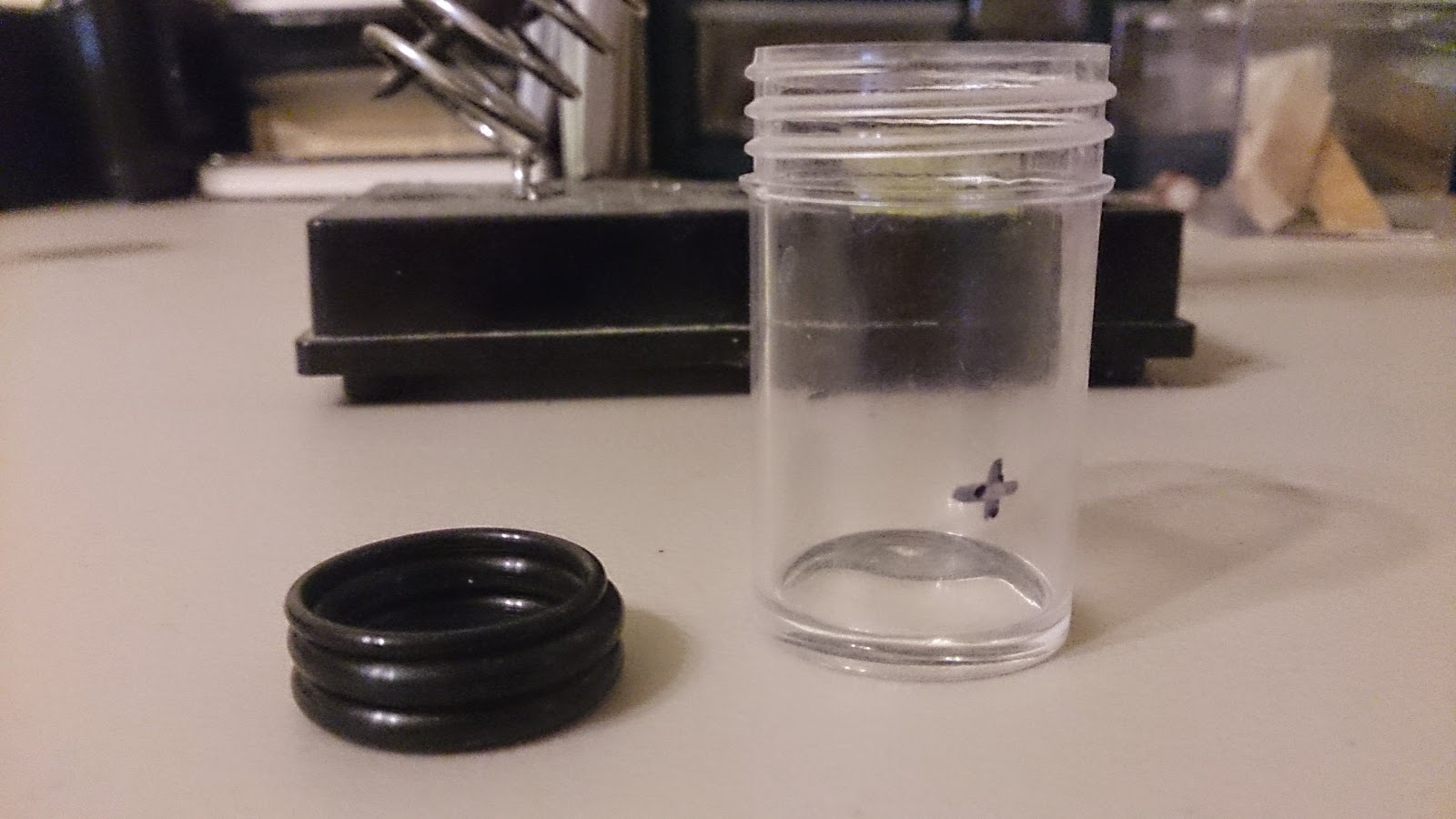 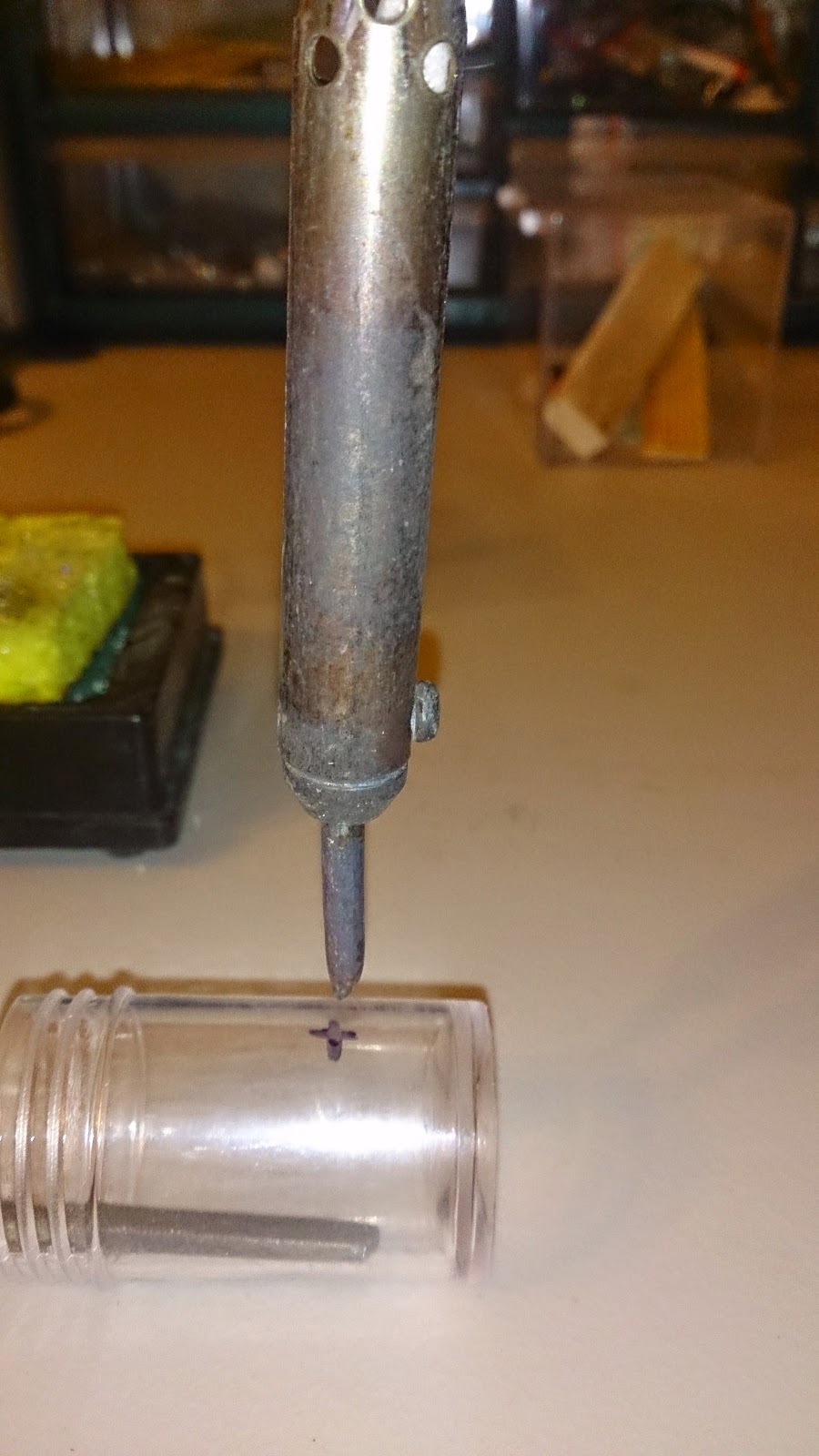 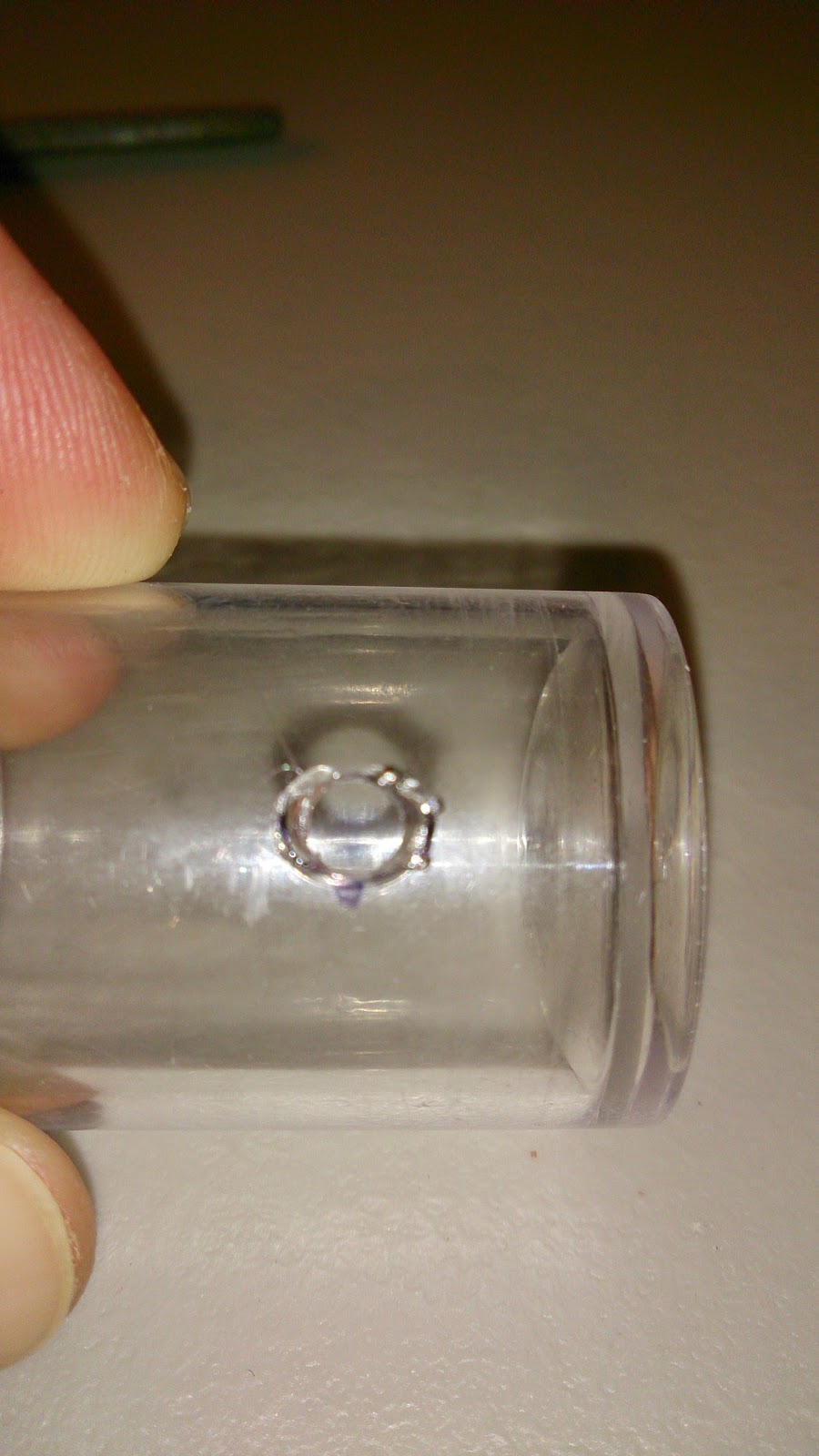 Hole made with soldering iron

The metal going from the inside to the outside is a titanium piercing earring identical to one used in a previous ESPeri.Impass prototype. 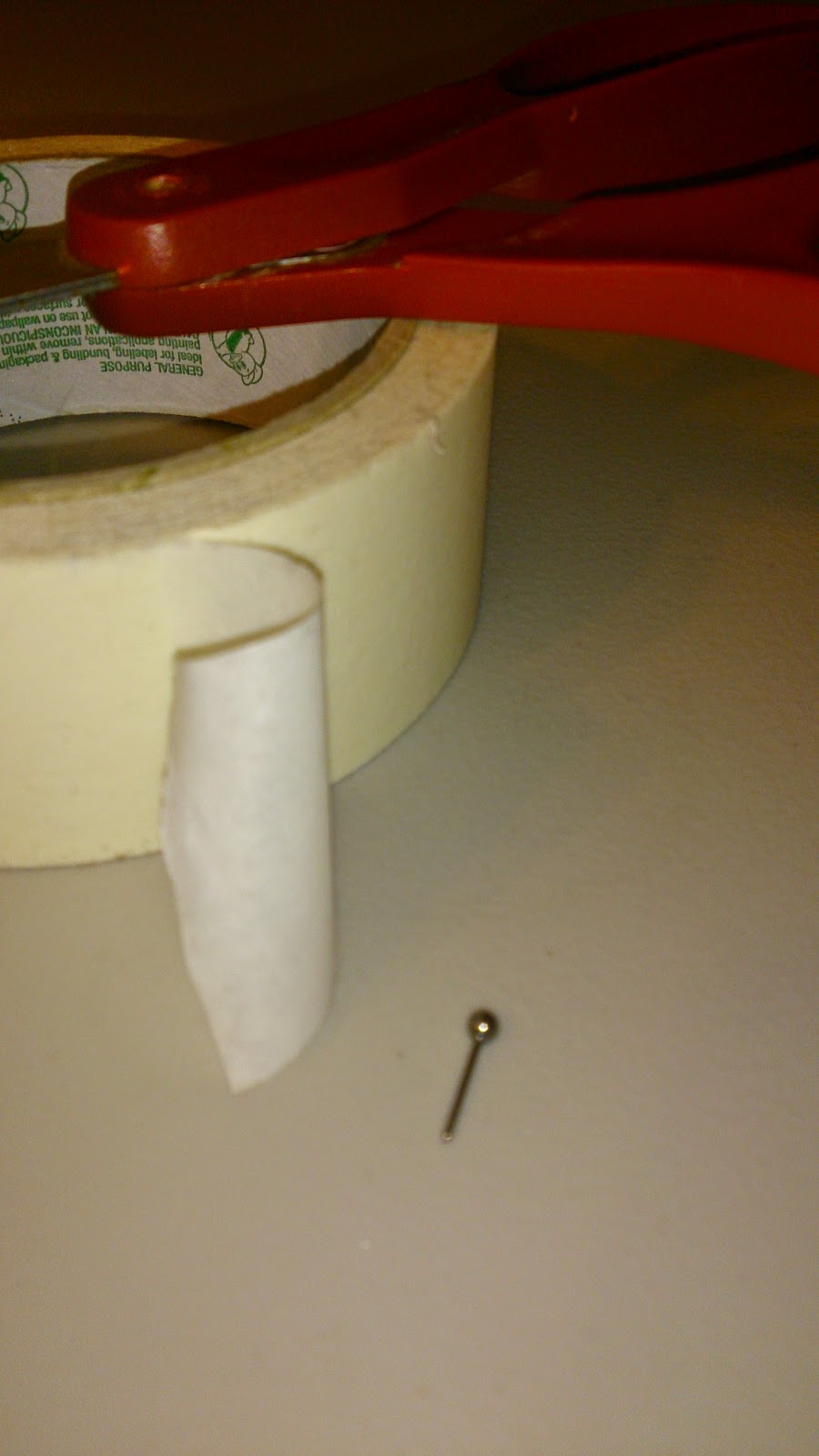 Masking tape and titanium piercing earring
The hole was meant to be sealed with silicone caulk.  To keep the silicone on the inside of the jar from flowing into unwanted place a piece of masking tape was chosen which will adhere to the inside of the jar and provide a barrier.  The tape was slit with the intention of peeling back the tape one flap at a time rather than tearing it and possibly dislodging the silicone or whisker. 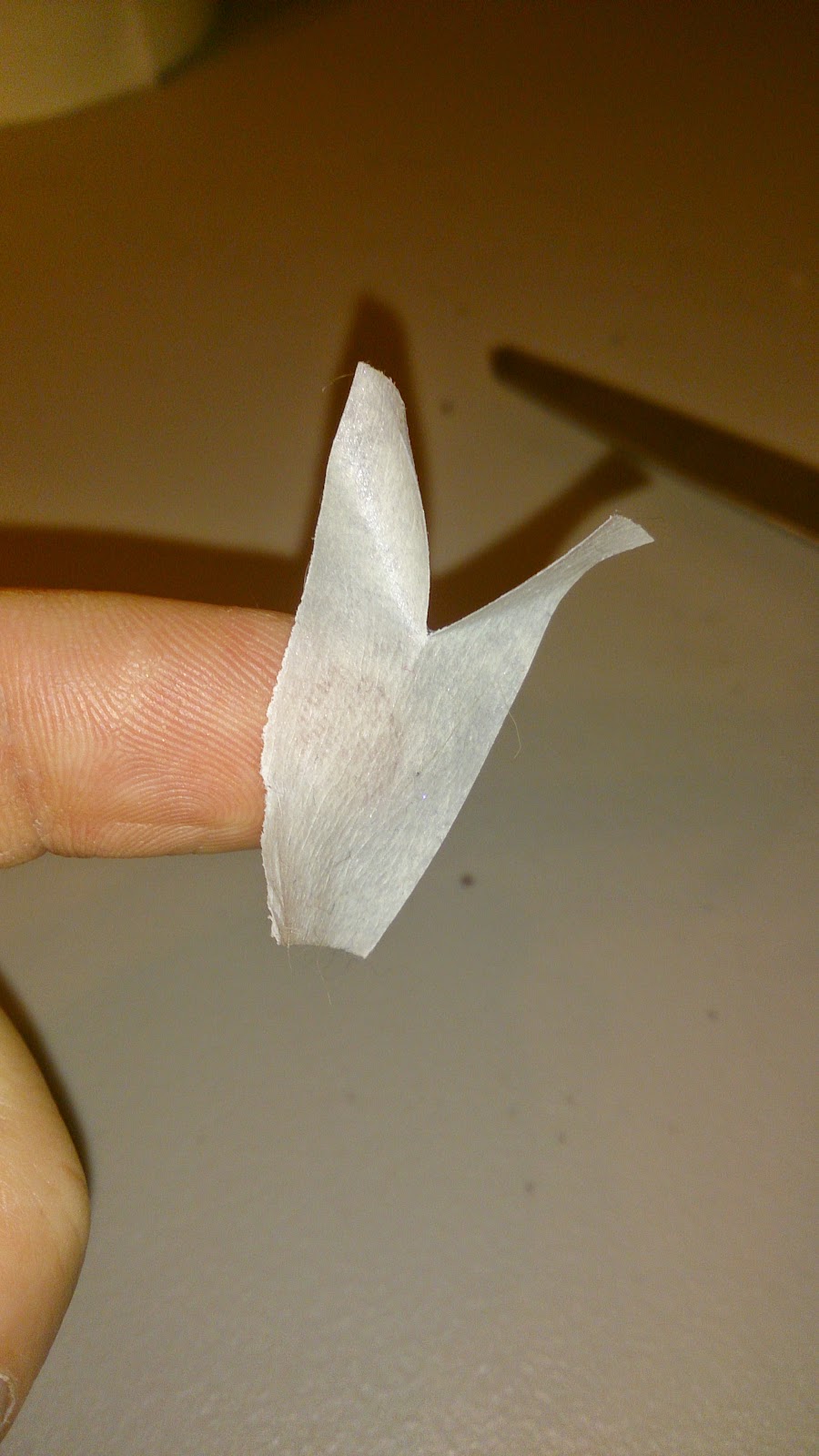 Piercing lodged in the slitted tape

The piercing rests at the top of the slit with the tape surrounding it.  It was inserted into the jar so the sticky side of the tape was against the jar and the piercing post came through the hole. 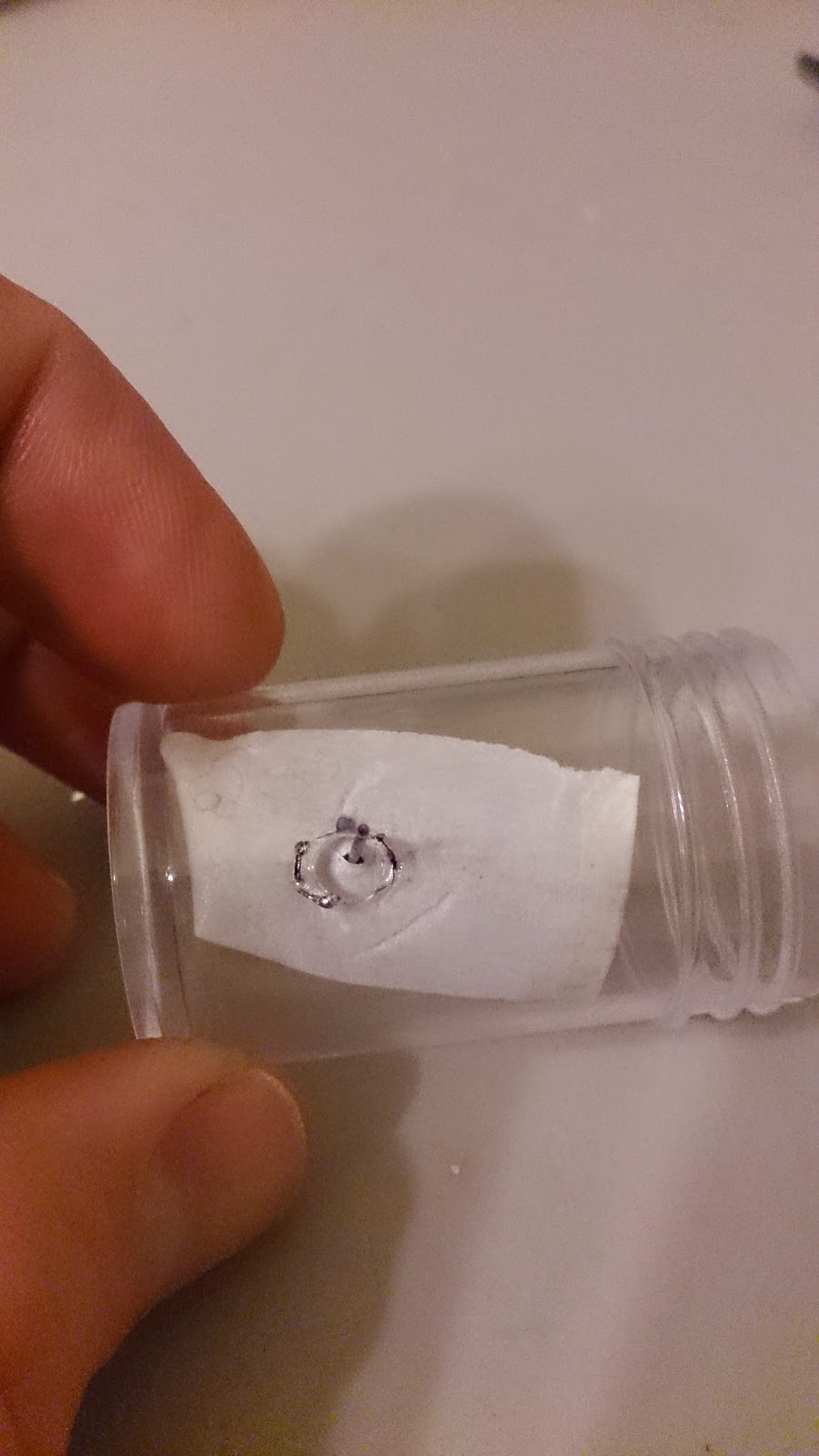 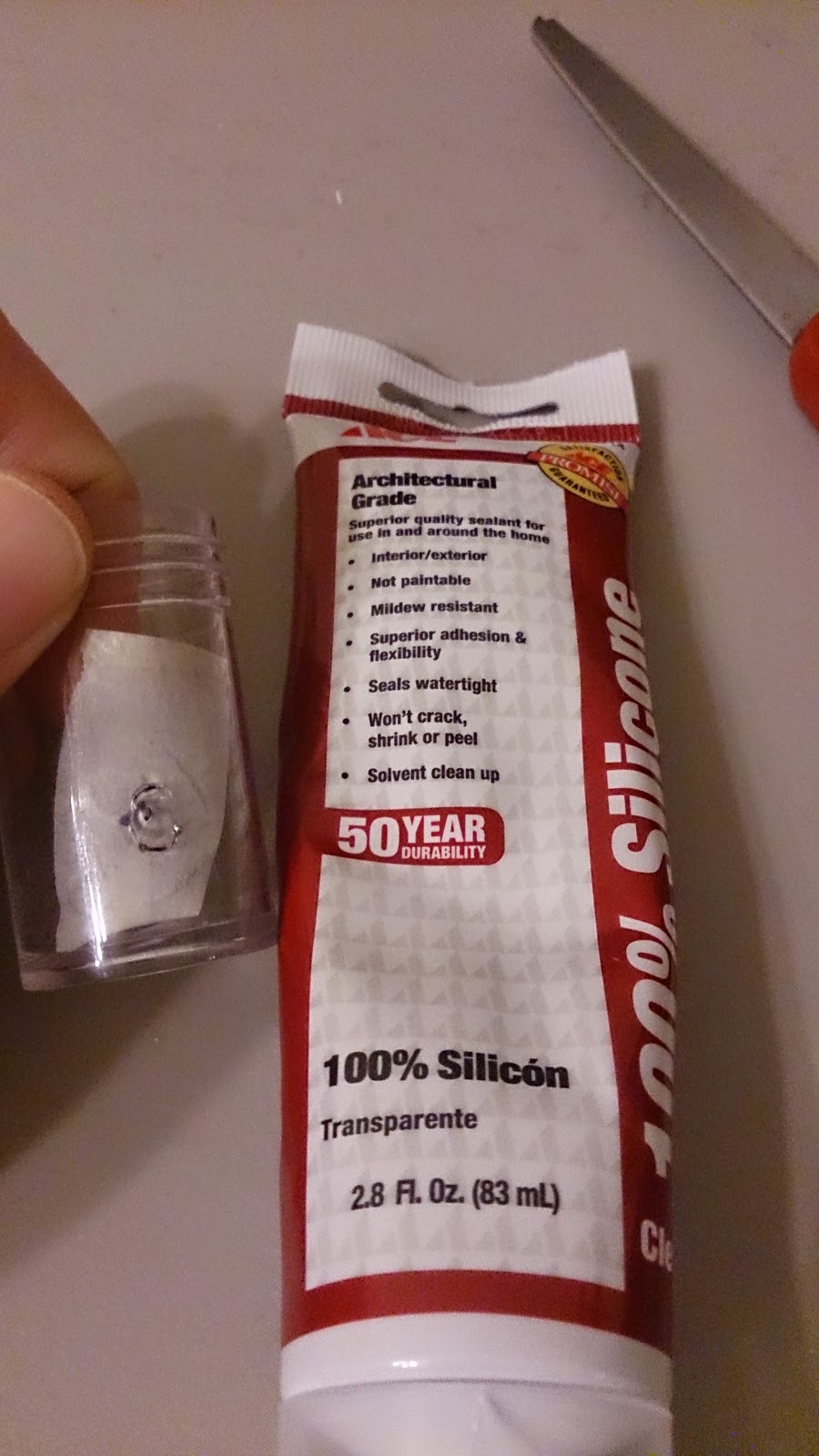 100% silicone sealant, also used on the previous prototype, was applied to the hole in the jar so as to surround the piercing post.  It has been set to dry overnight. 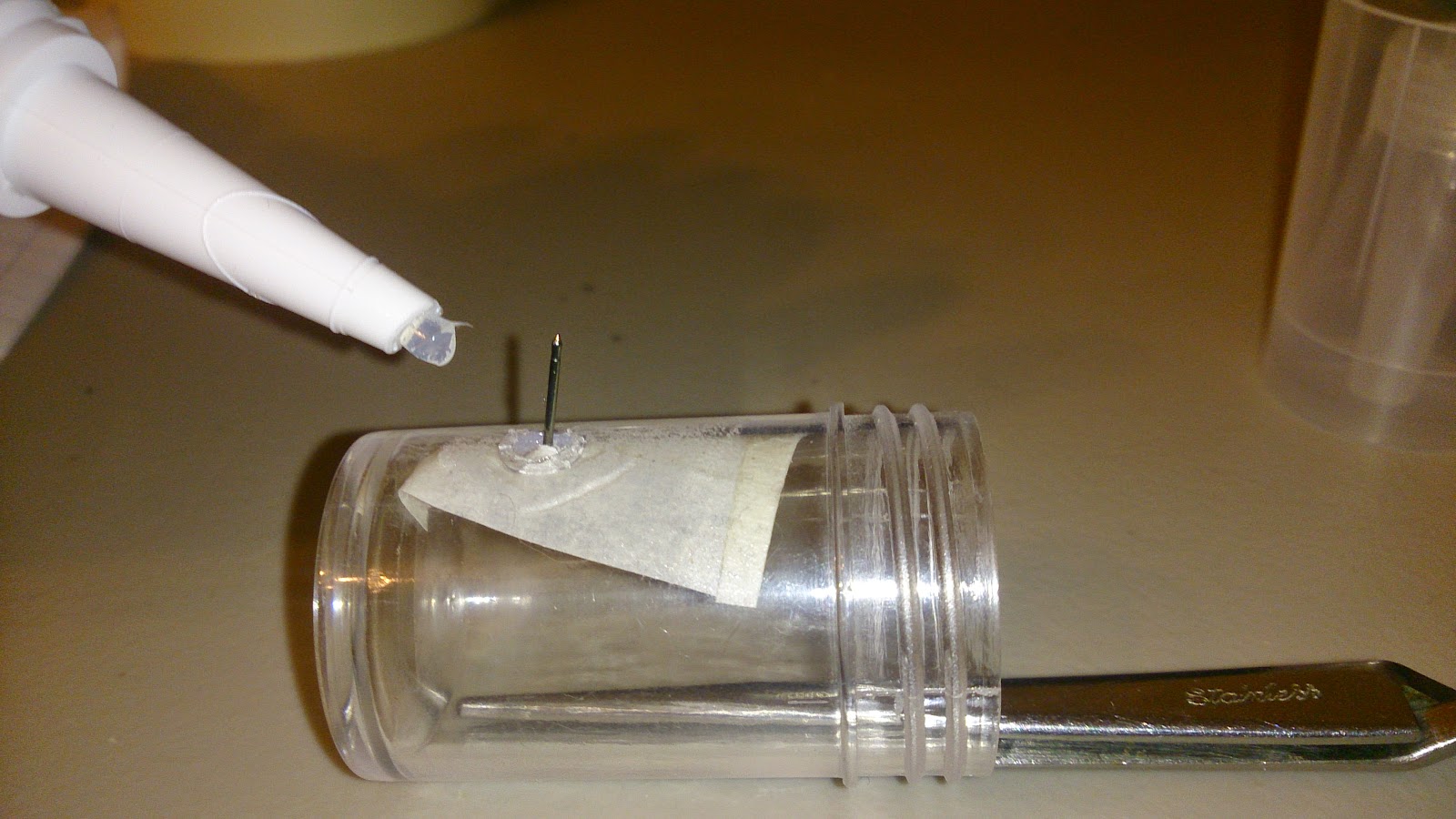 Applying silicone to hole in jar 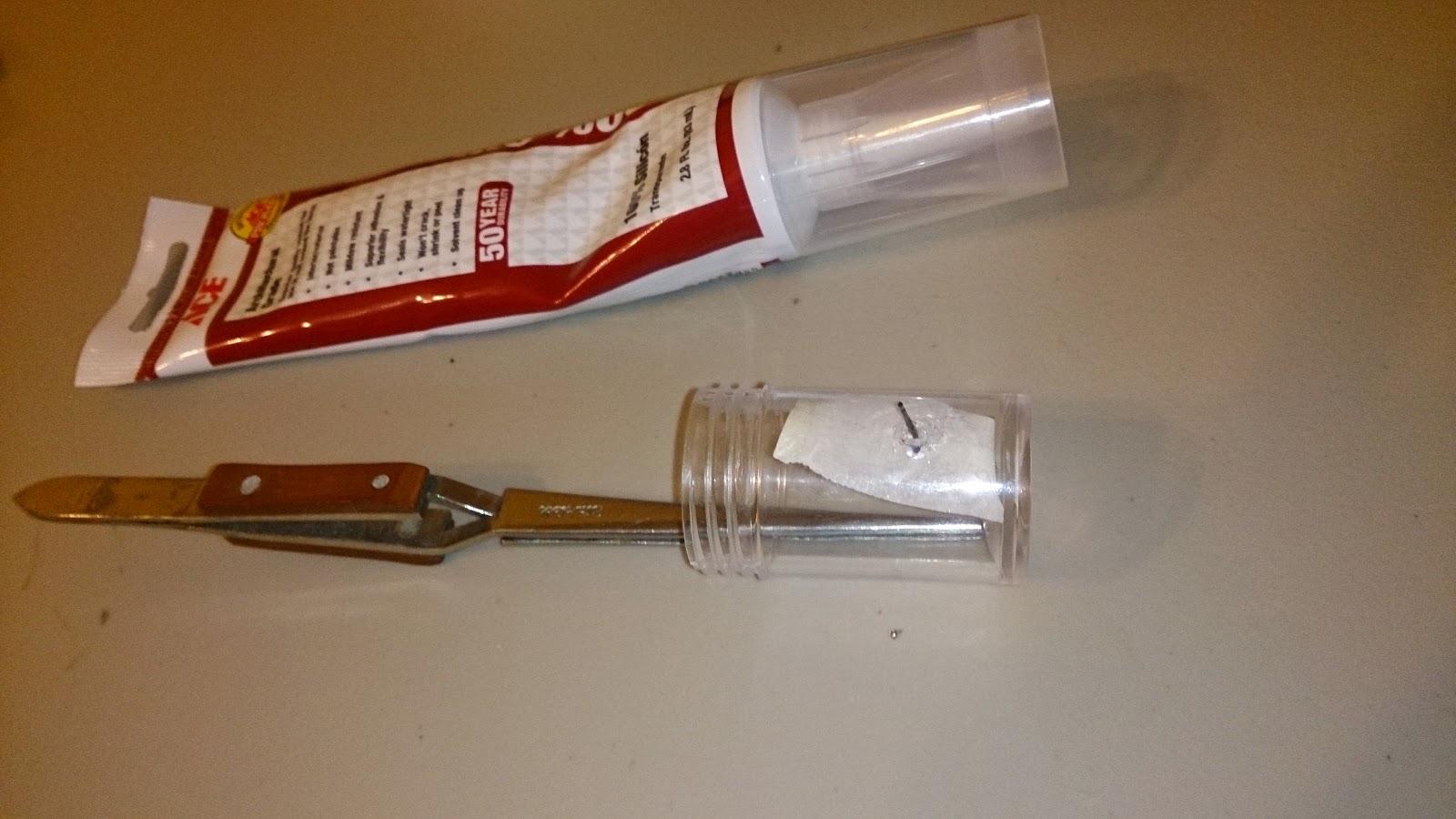 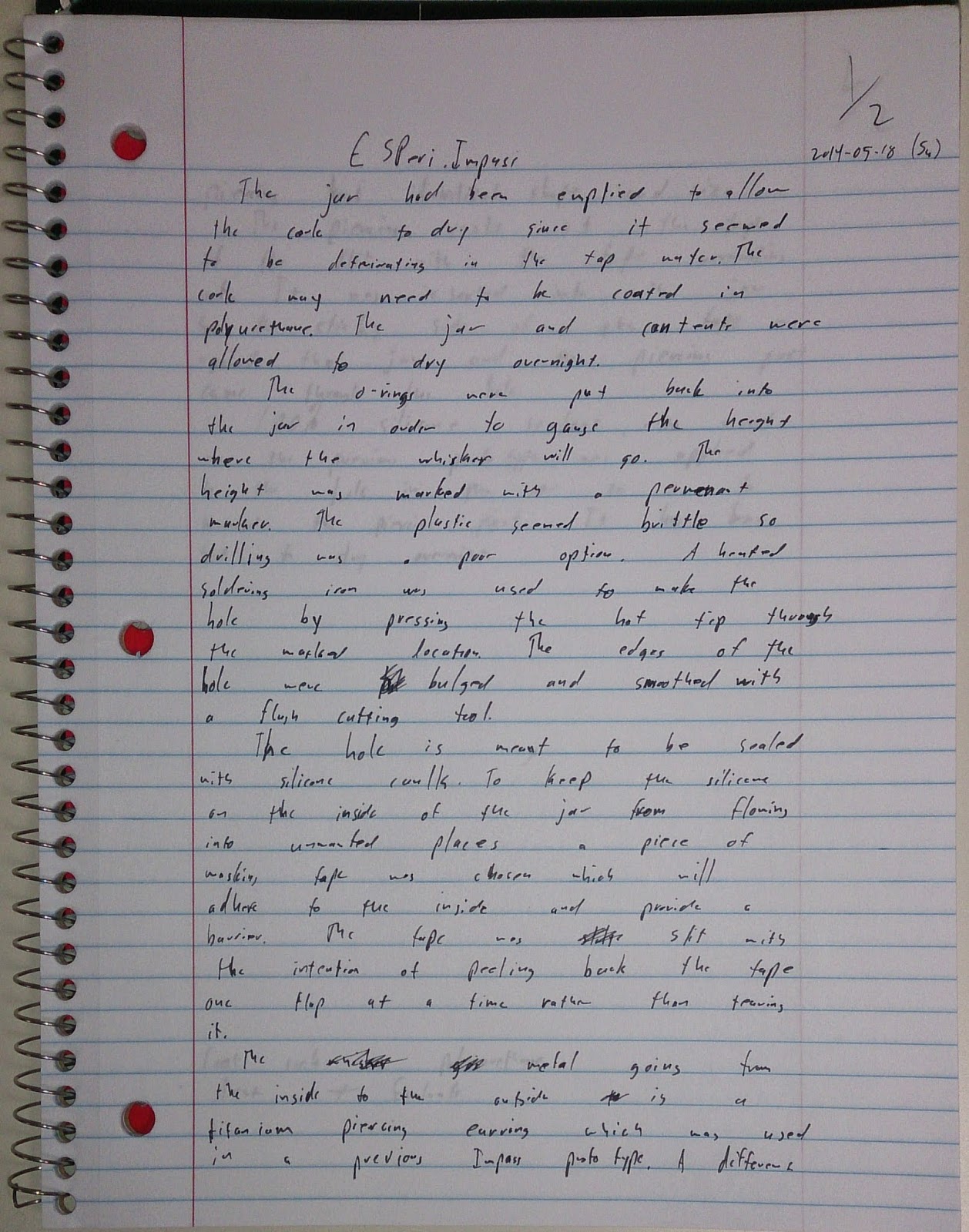 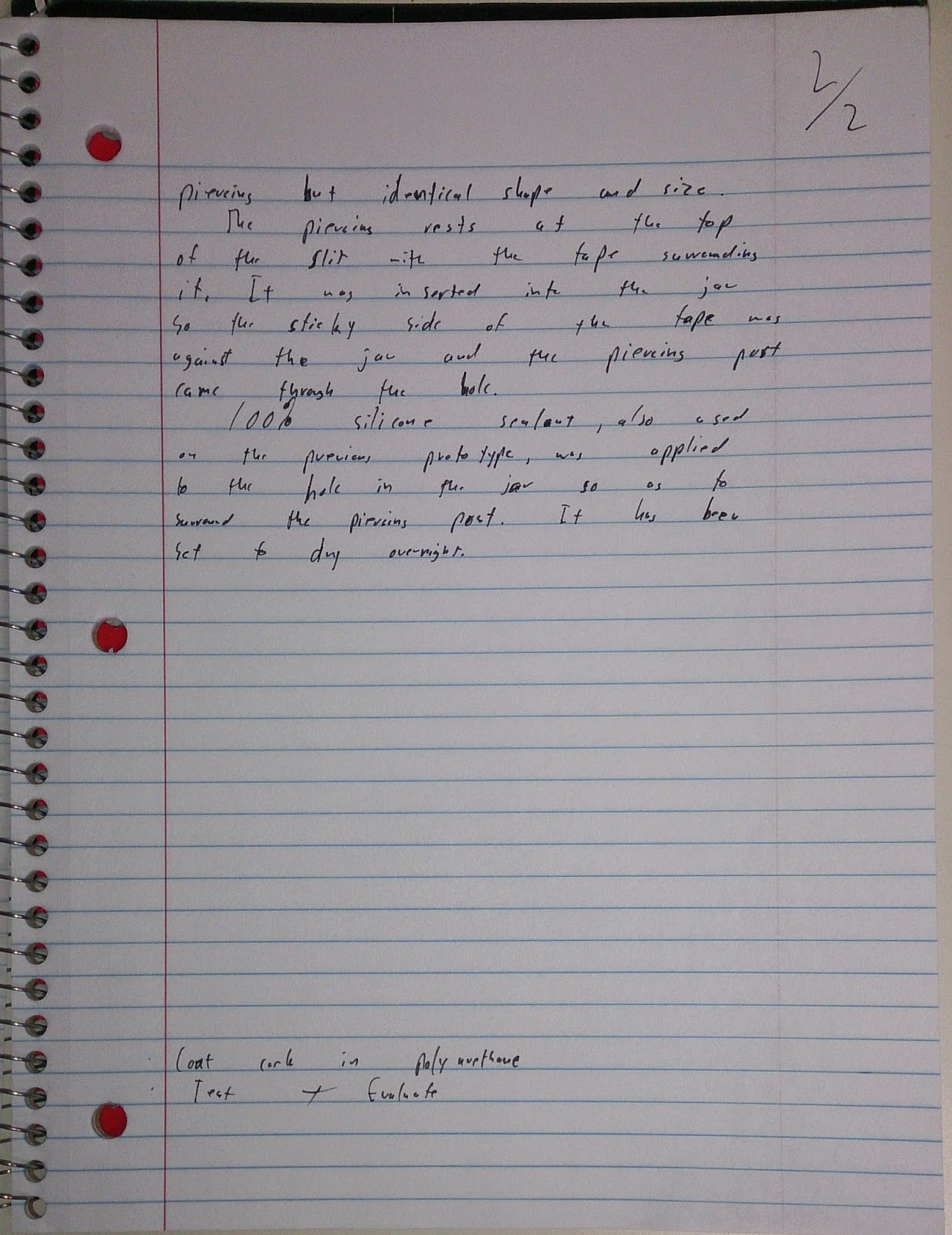