The launcher was strapped to a backpack in order to be transported to an open space to be tested for distance and to change some factors with the tennis ball hammock. Rain was possible so a plastic skateboard was chosen for transportation. Originally a nearby, privately-owned baseball diamond was going to be the testing arena but it was in use. A park with an open grass area was easily in skating distance and selected. The rig and skateboard The tennis ball launcher was shot once with little regard for trajectory then again with the launcher at roughly 45 degrees. The 45 degree angle shot went further than the unaimed shot so all shots thereafter were made at approximately the same angle. Left-Right error did not seem necessary to measure since the shots were all accurate enough for this type of projectile launcher.


No regard for the optimum angle

Launch at 45 degree angle. The standard for the day 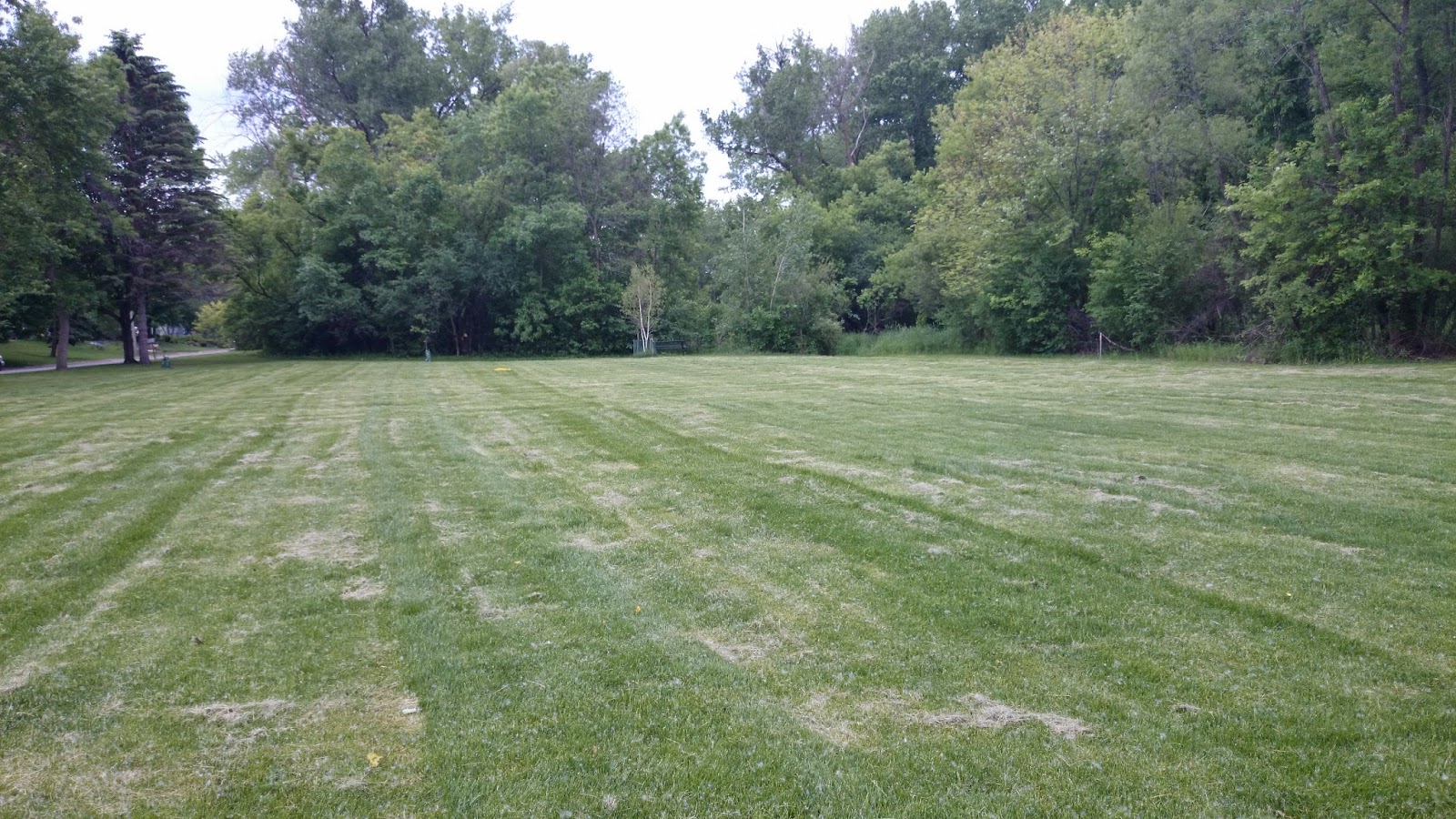 The first modification to the tennis ball launcher was a single two inch safety pin at the back of the wide strap. The concept was to make the hammock less deep and possibly reduce some drag as the tennis ball exited the hammock during launch. This did not prove any more effective than the unmodified hammock. 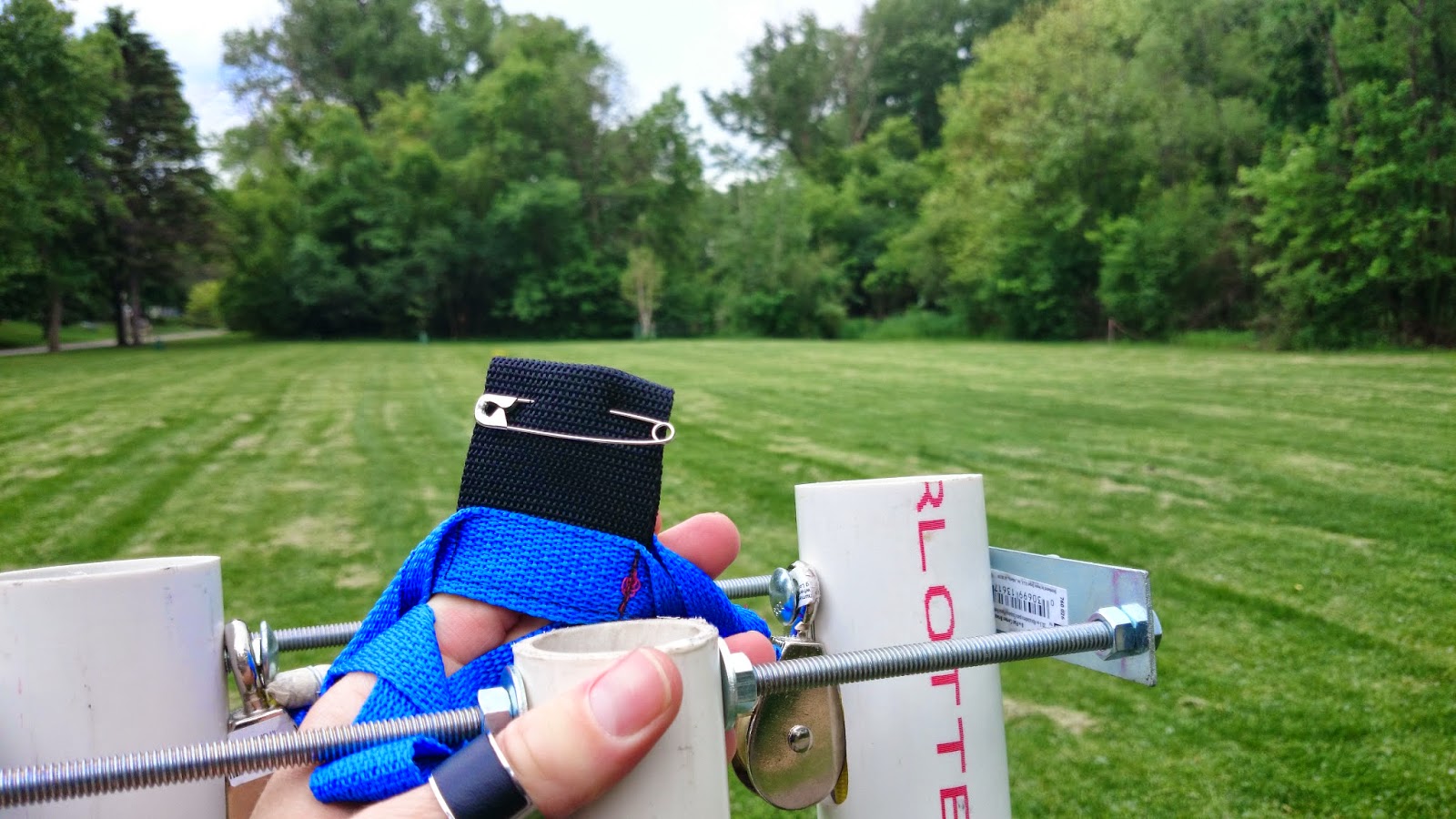 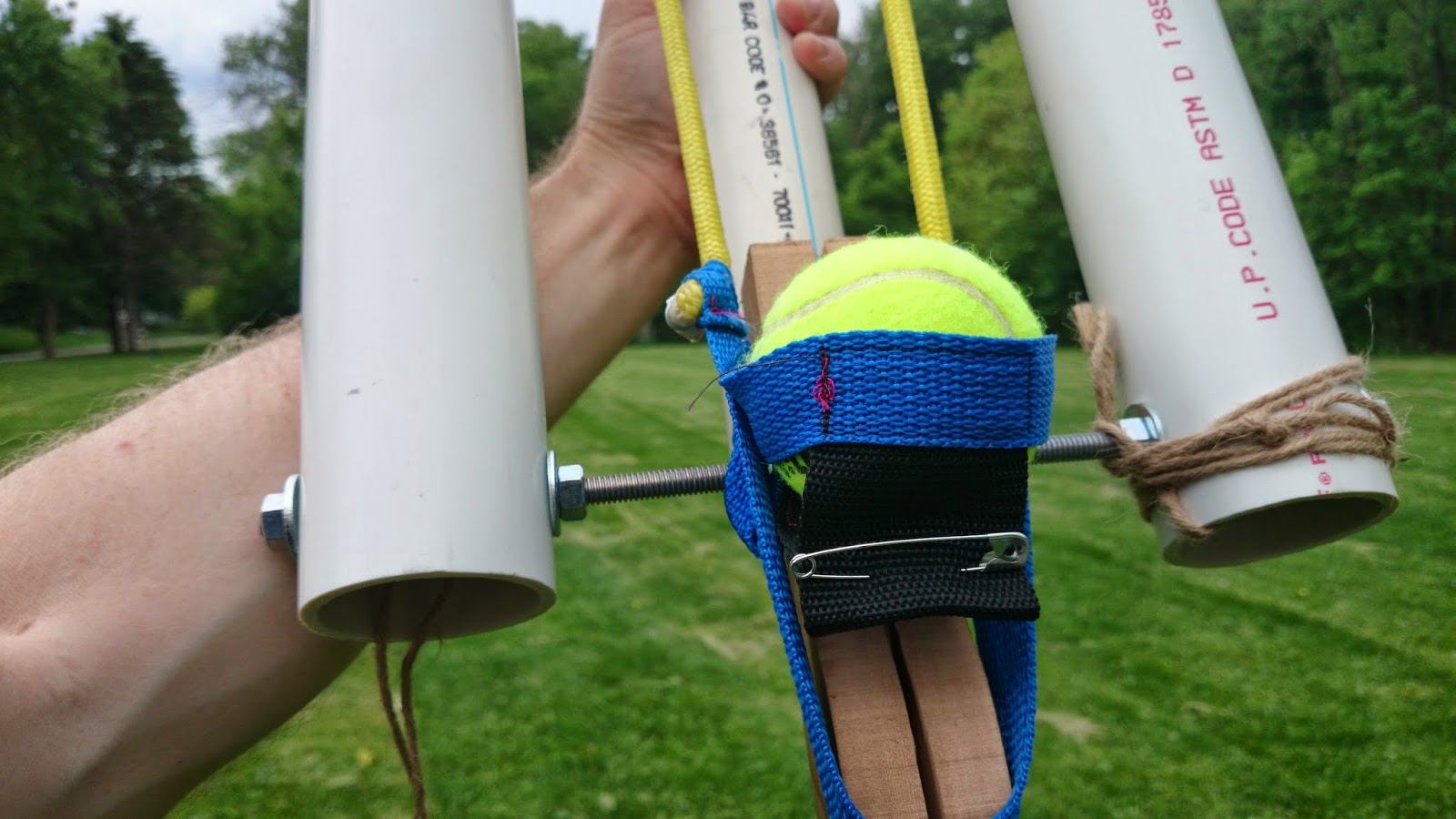 The tennis ball in the modified hammock

The second modification to the hammock was two safety pins at the back of the wide strap and at an angle. The concept was to cradle the tennis ball while making the hammock less deep. This proved more effective than the unmodified hammock since the tennis ball came to rest a few feet further than any other shot. It was also a very straight shot. Firing caused both safety pins to open but remain in place and functional. 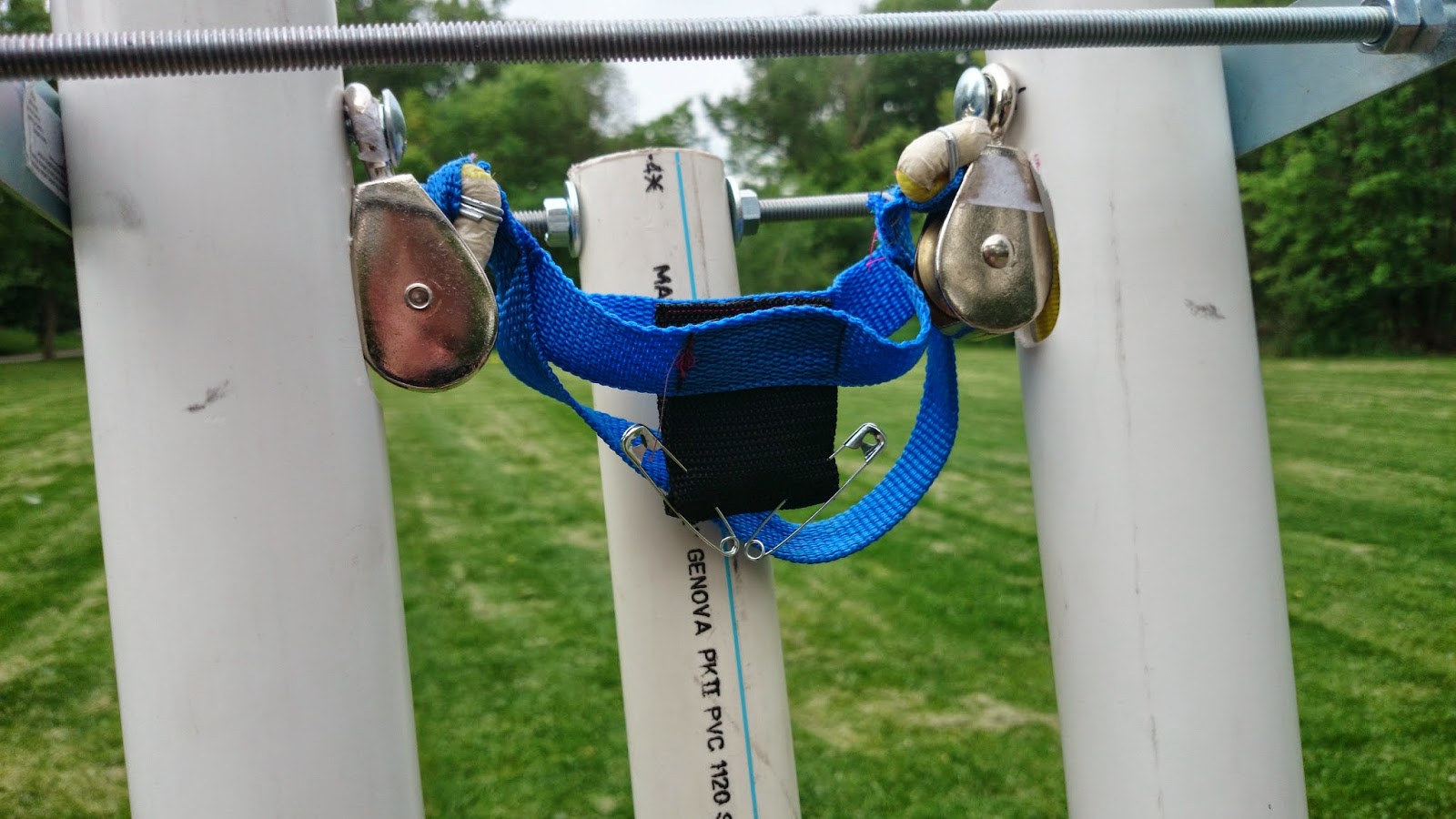 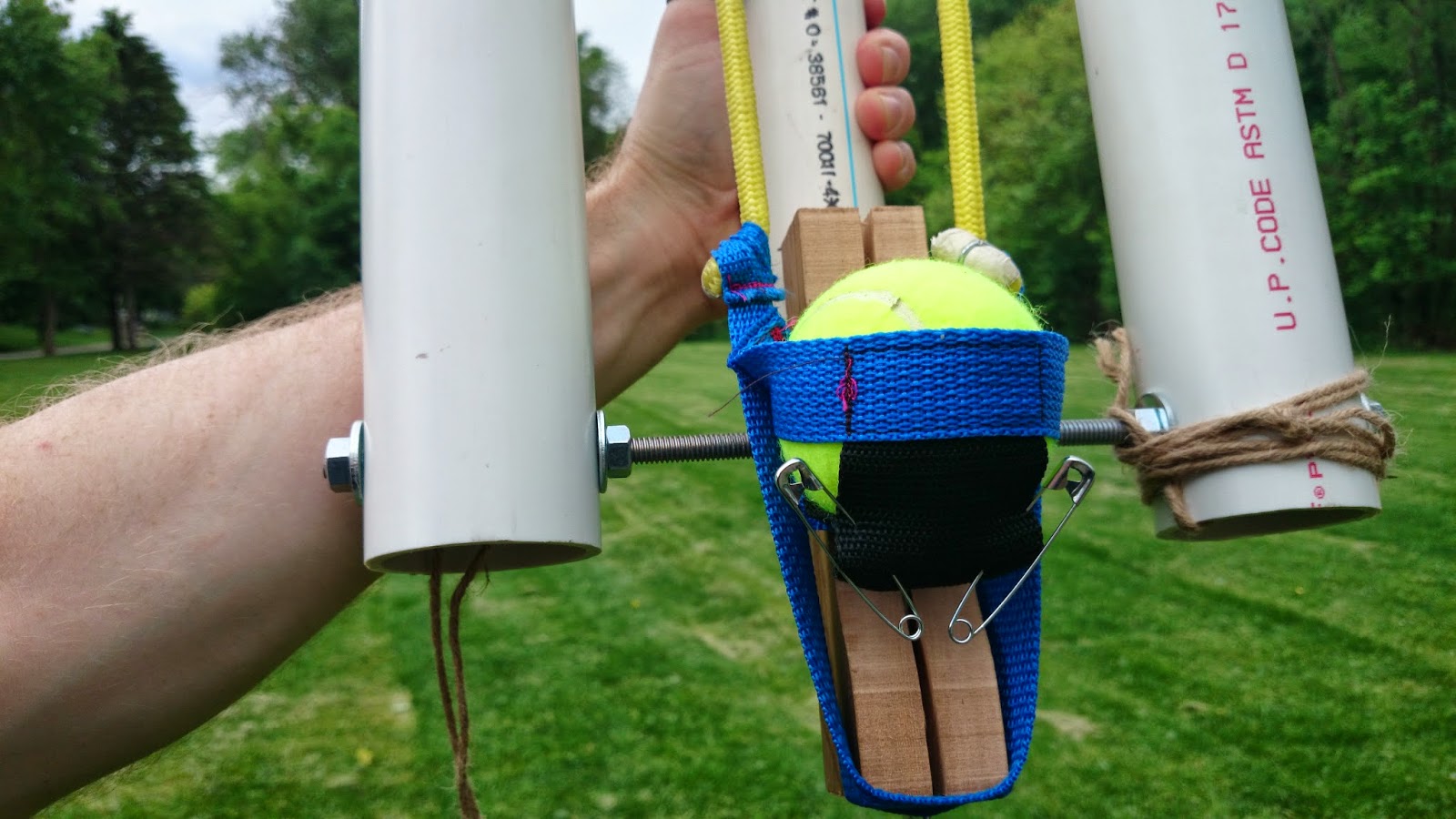 Ready to test the second mod 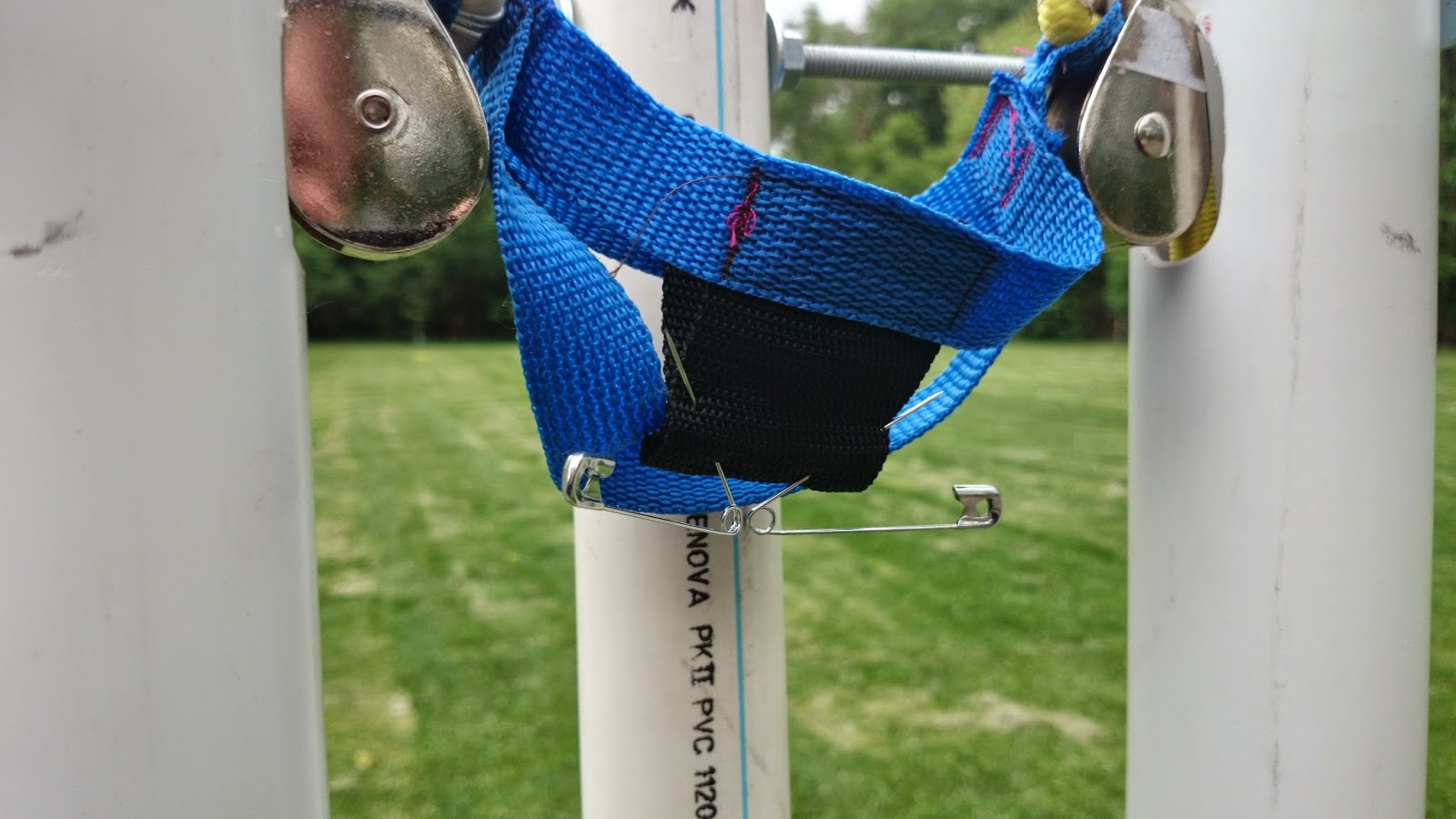 The launch opened both safety pins

The third modification was to relocate the safety pins to make the hammock even less deep but keep the same angle. The tennis ball sat very far forward. This was approximately as effective as the unmodified hammock. 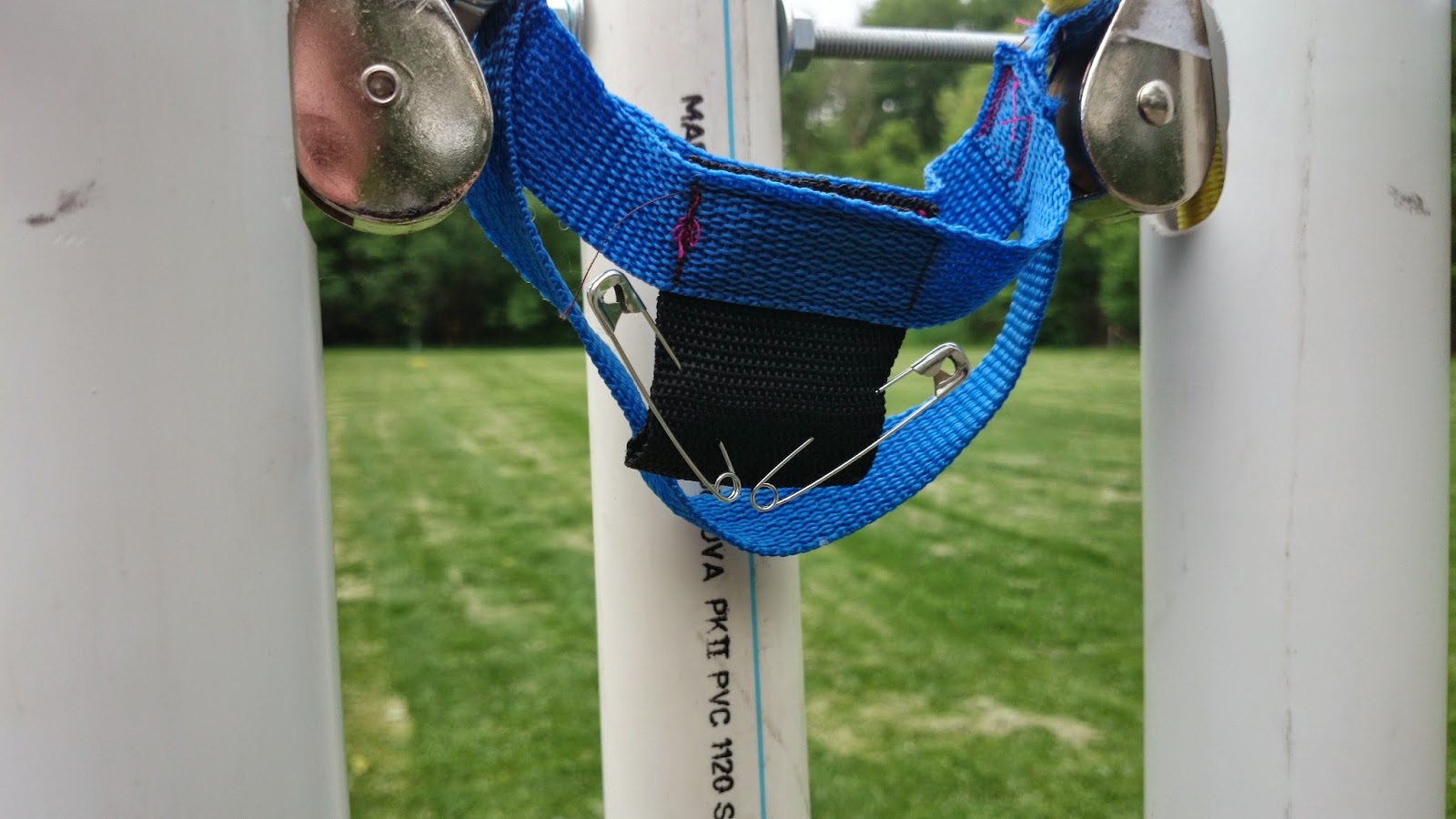 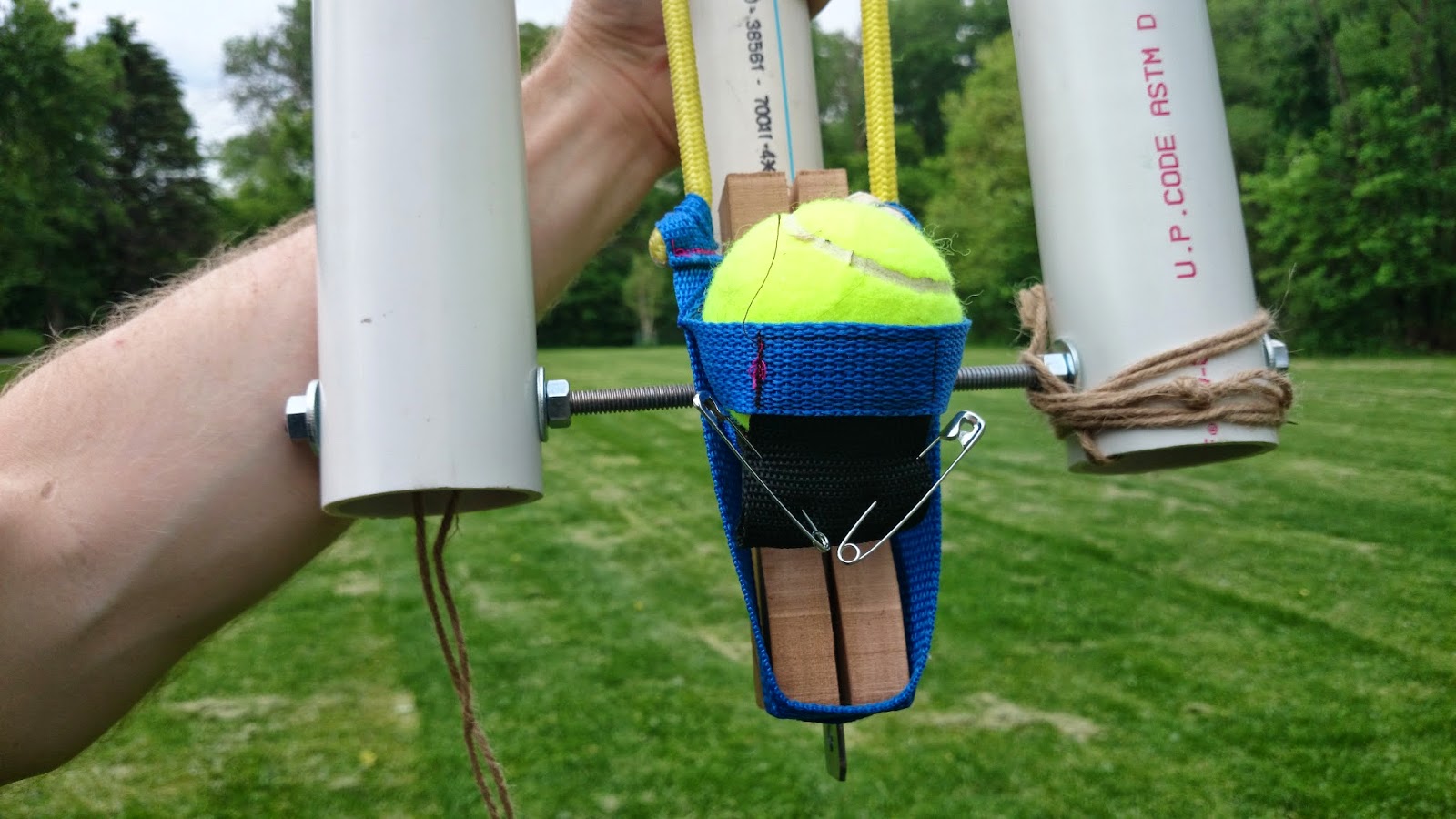 Launch of the third hammock mod

Counting my steps to the best distance. 50 steps at nearly 2 feet per step

The launcher was disassembled so the plastic could be painted. The two inch PVC pipes with the elastics inside were spray painted a light blue. The painting was done on an outdoor deck but stopped when the vapors were noticeable inside the apartment. The central PVC was painted green using the same box to keep surroundings clean but it was done in a parking garage. 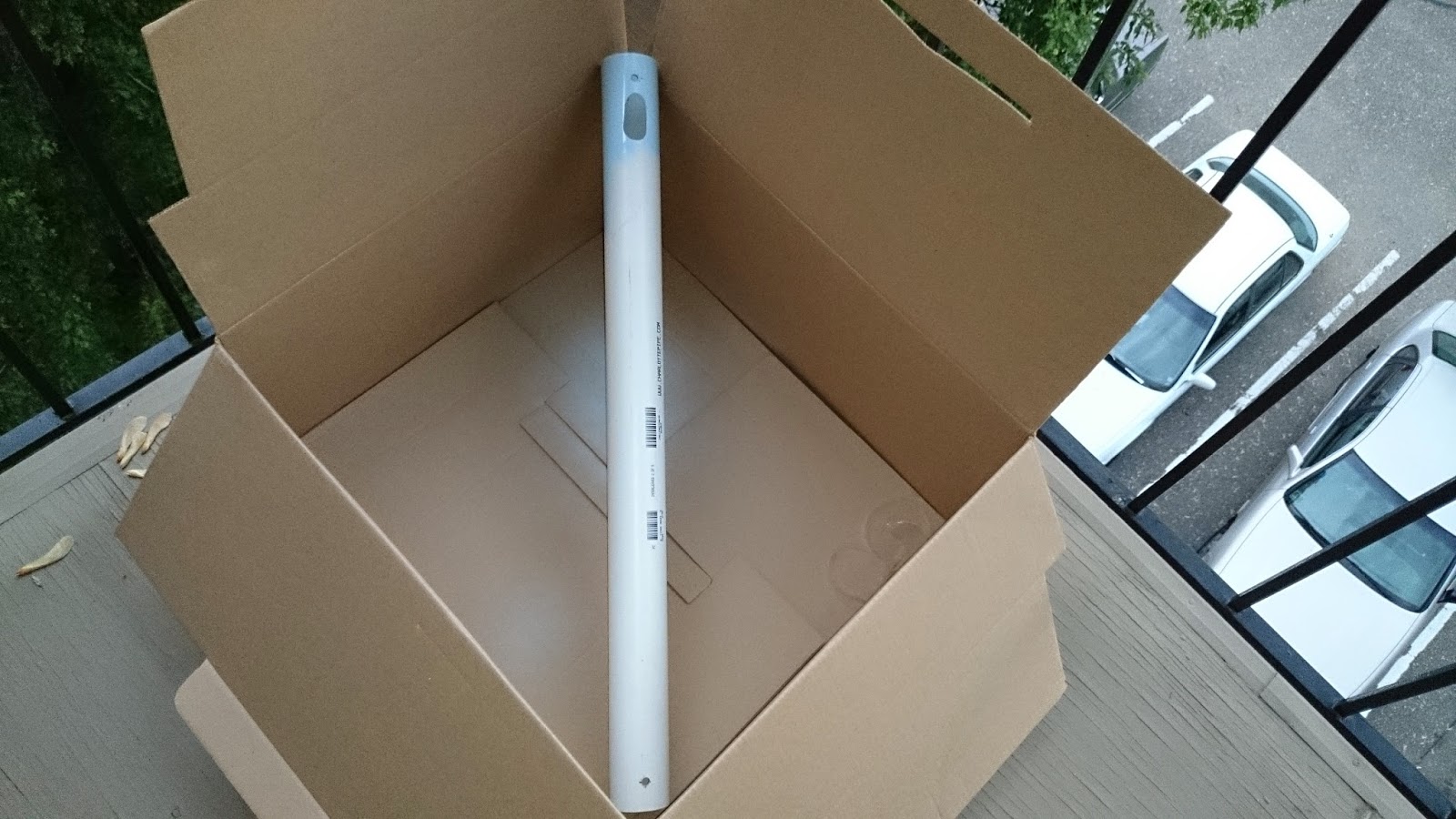 It's hardly a professional painting hood 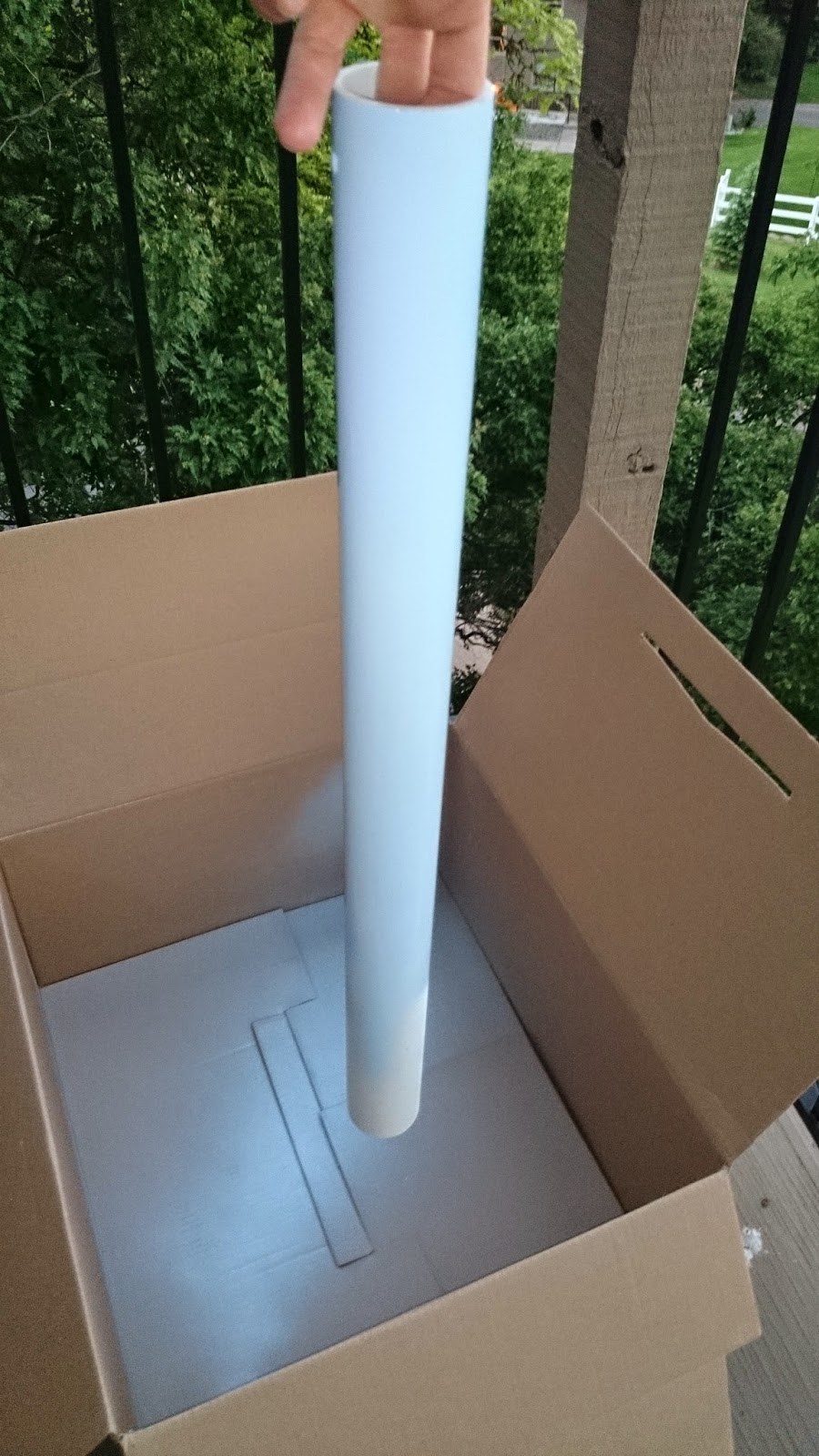 Even holding the PVC from the inside was messy 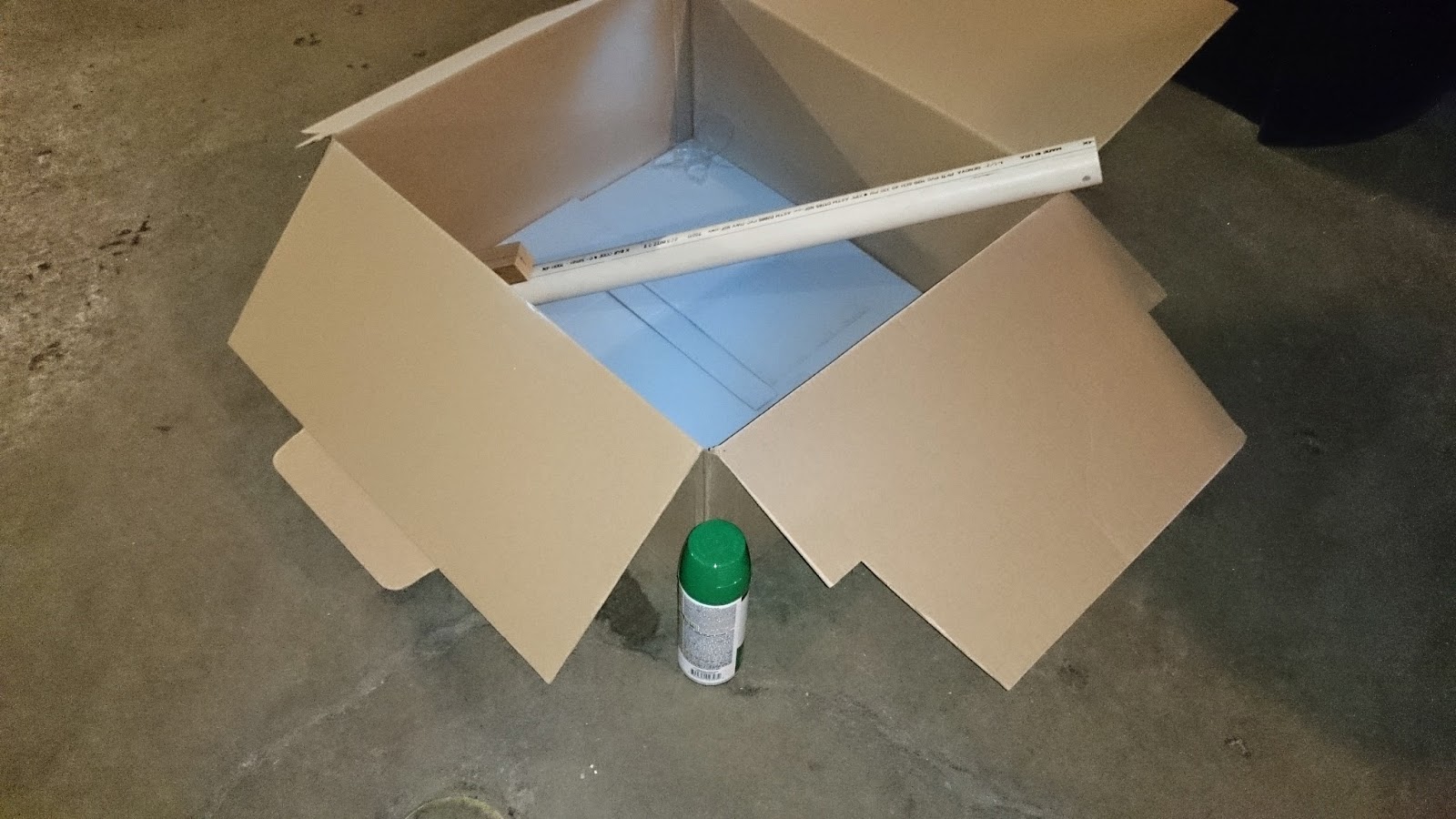 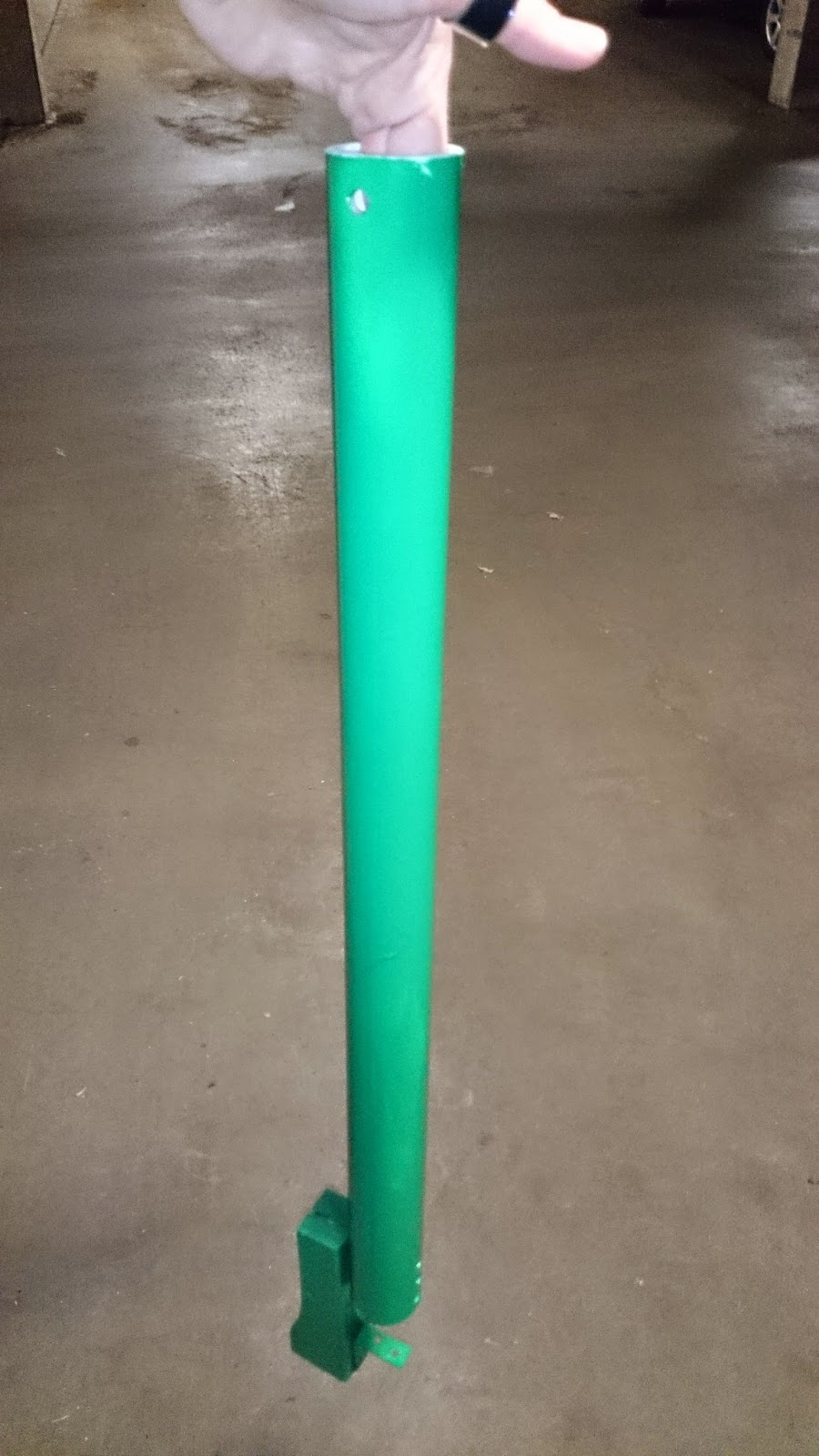