A six inch piece of two-conductor cord was cut, stripped, and tinned. Small gauge wire was used which was approximately 26AWG. Small pieces of shrink tubing were placed over two of the tinned ends. Those ends were soldered to the terminals of a 3.5mm phono socket. The shrink tubing was heated and snugged down onto the phono terminals and wires. The tinned ends with no shrink tubing were inserted into the NTC screw terminals of the temperature controller. No concern was given to polarity. The 3.5mm socket was glued in place with hot glue. The wires of the temperature controller were divided so the low-voltage DC wires of the thermometer did not mix with the 120VAC wires. 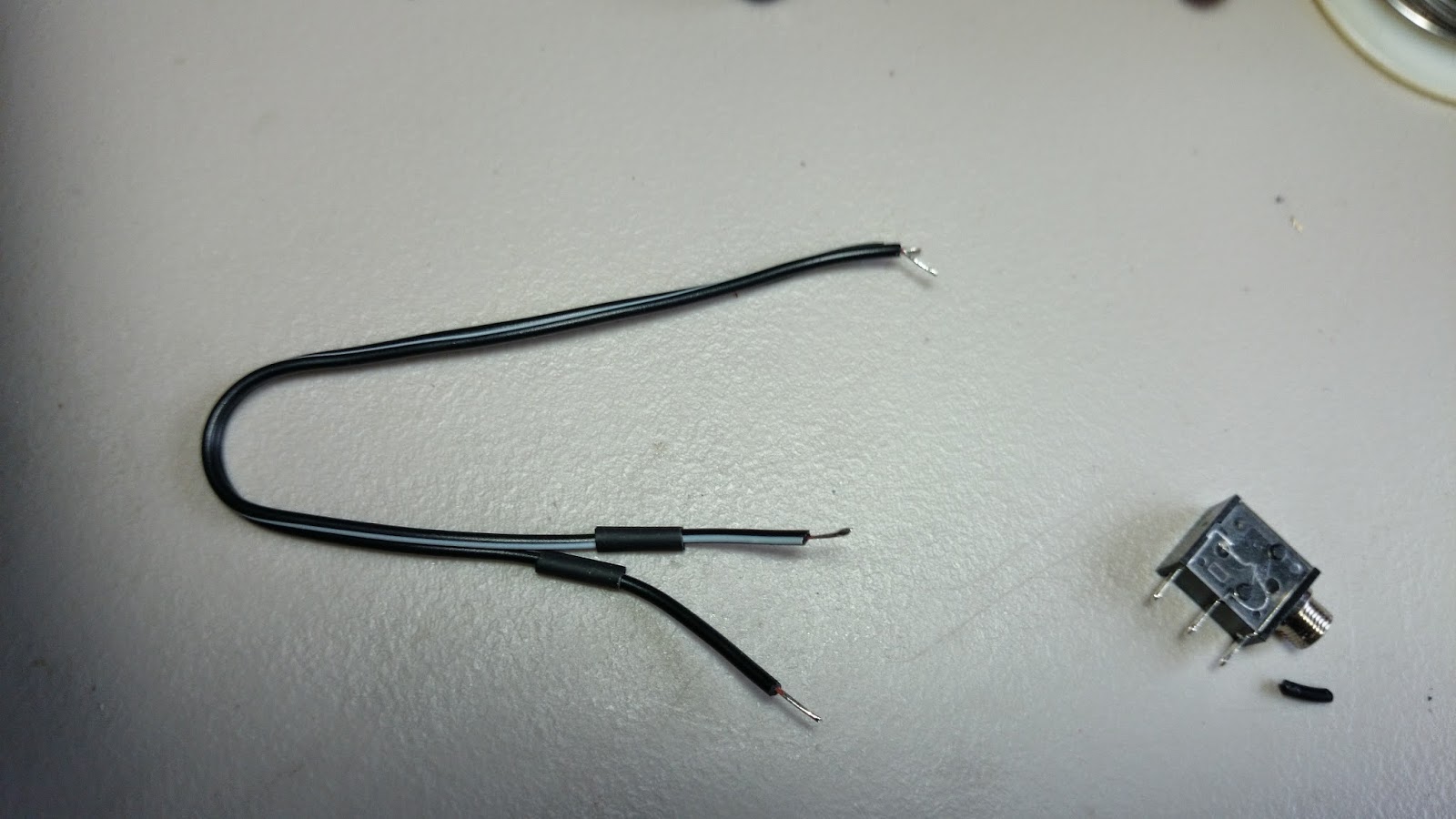 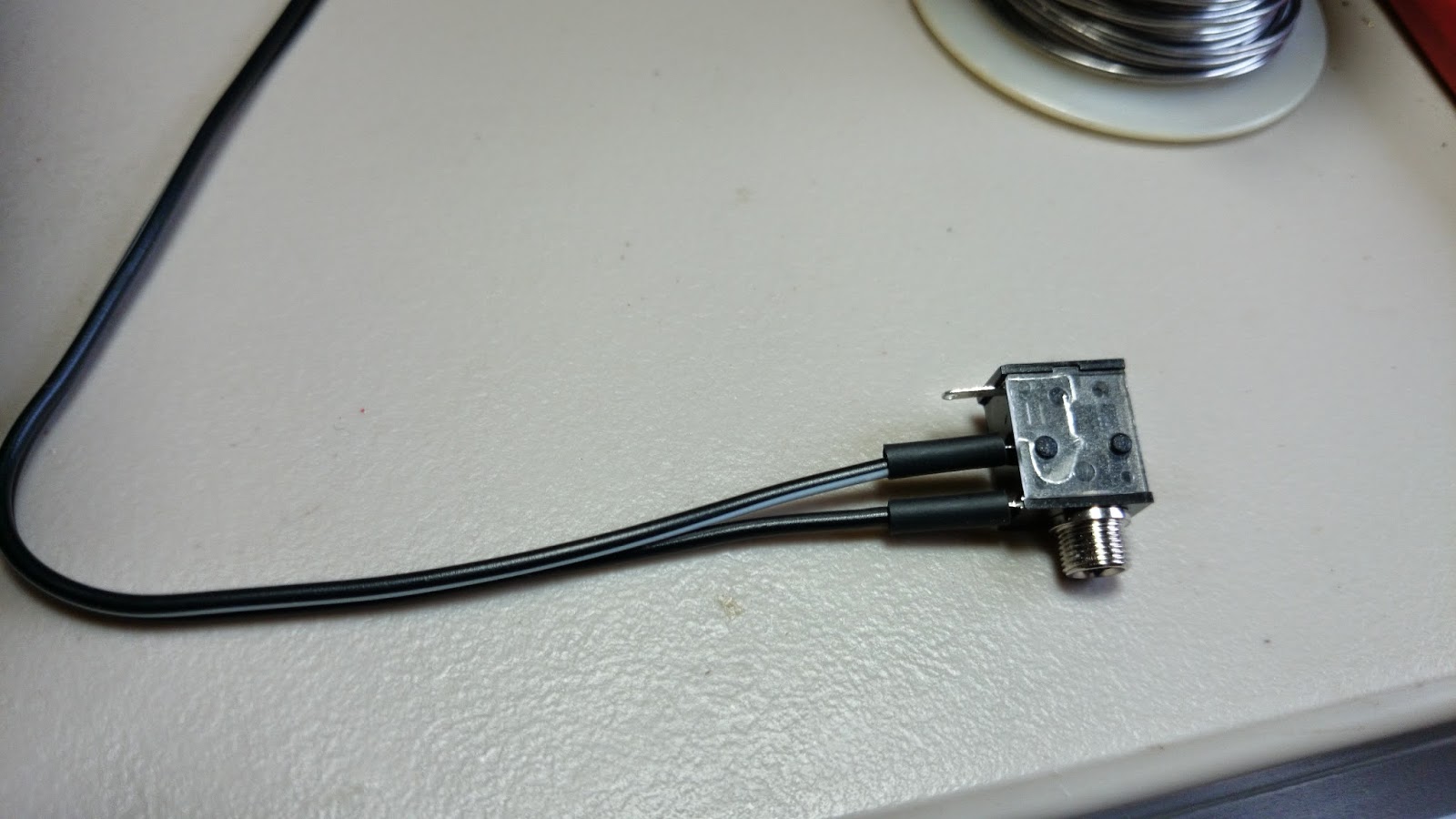 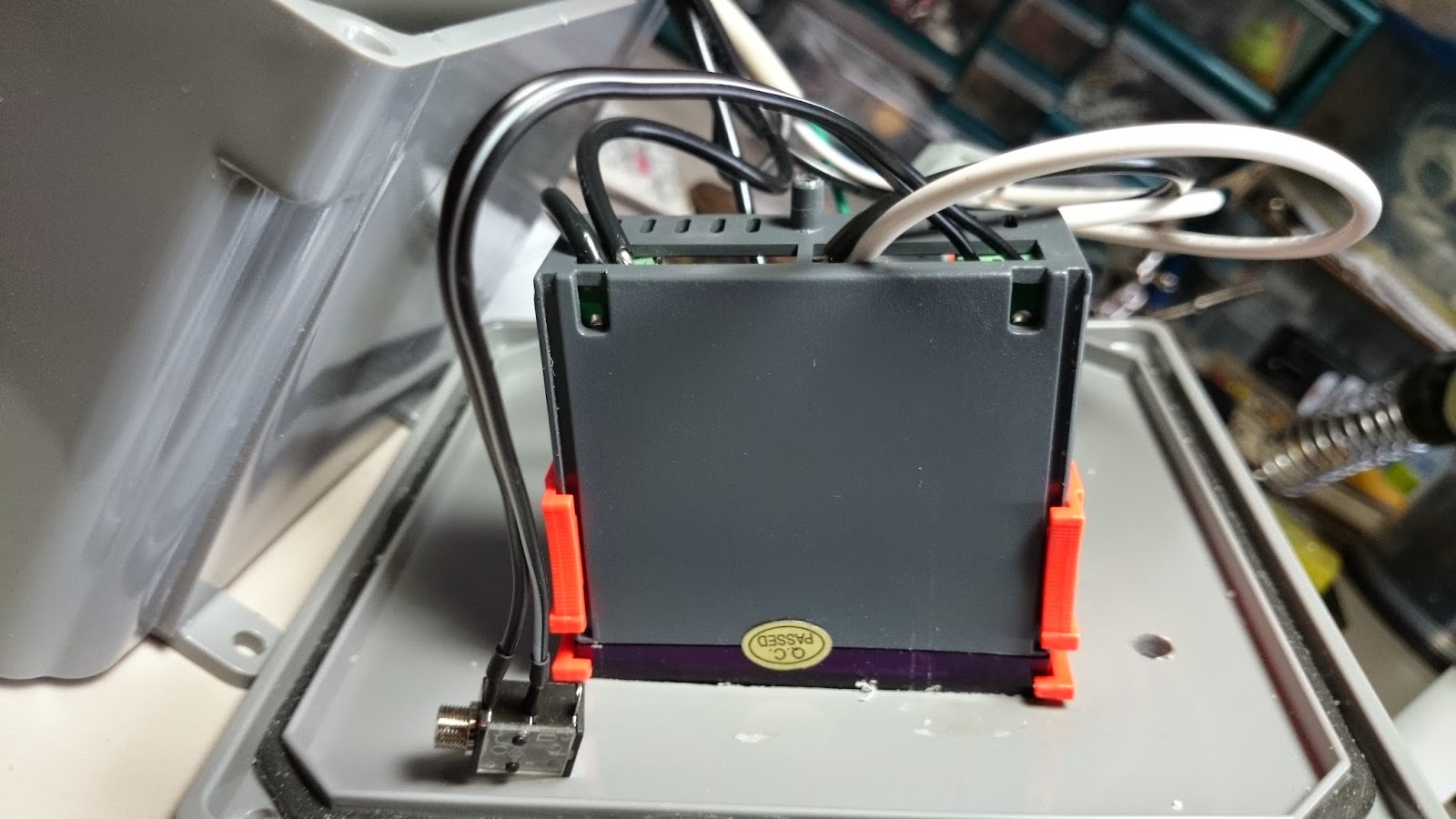 Attaching the 3.5mm socket to the NTC terminals of the controller 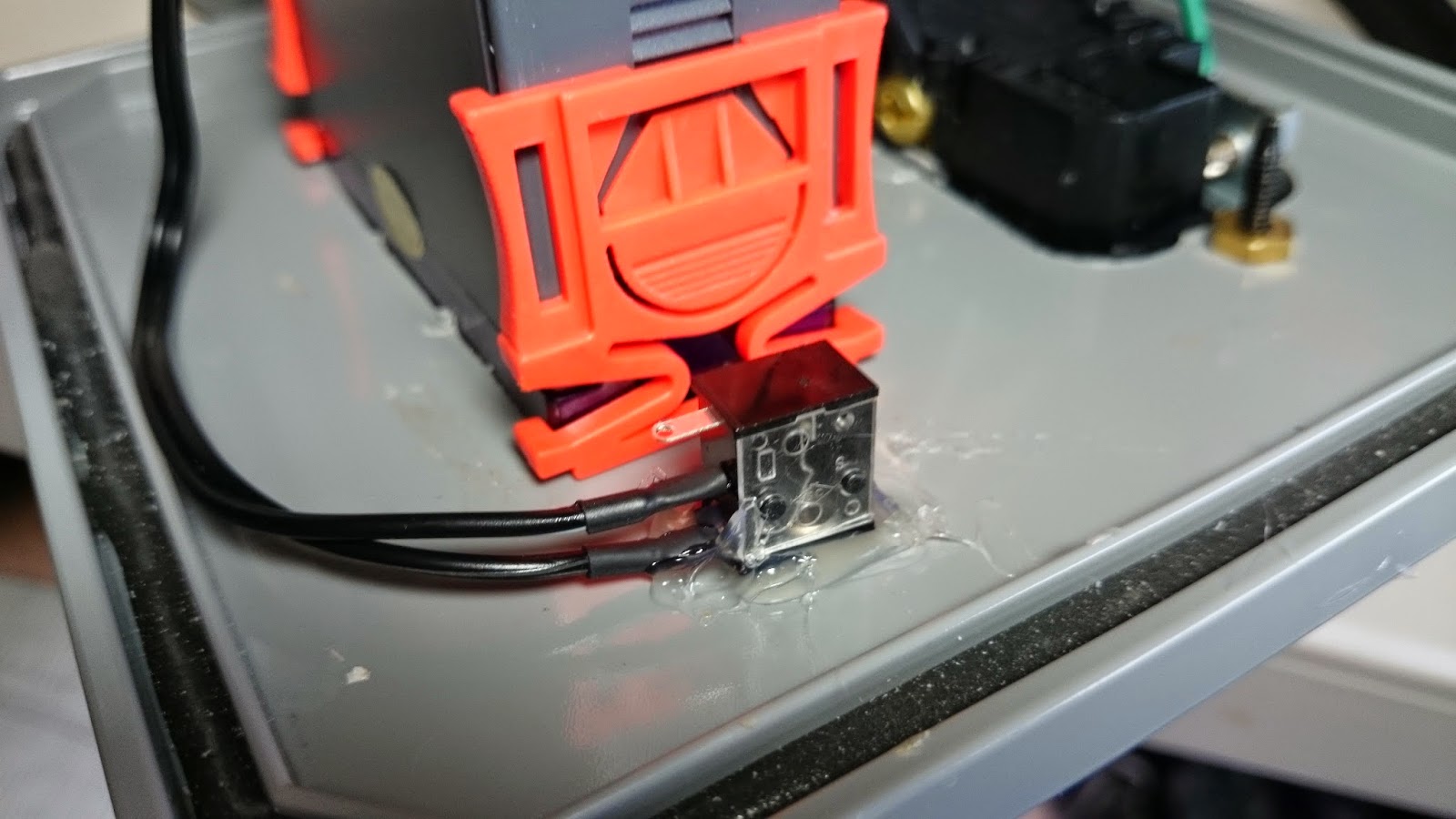 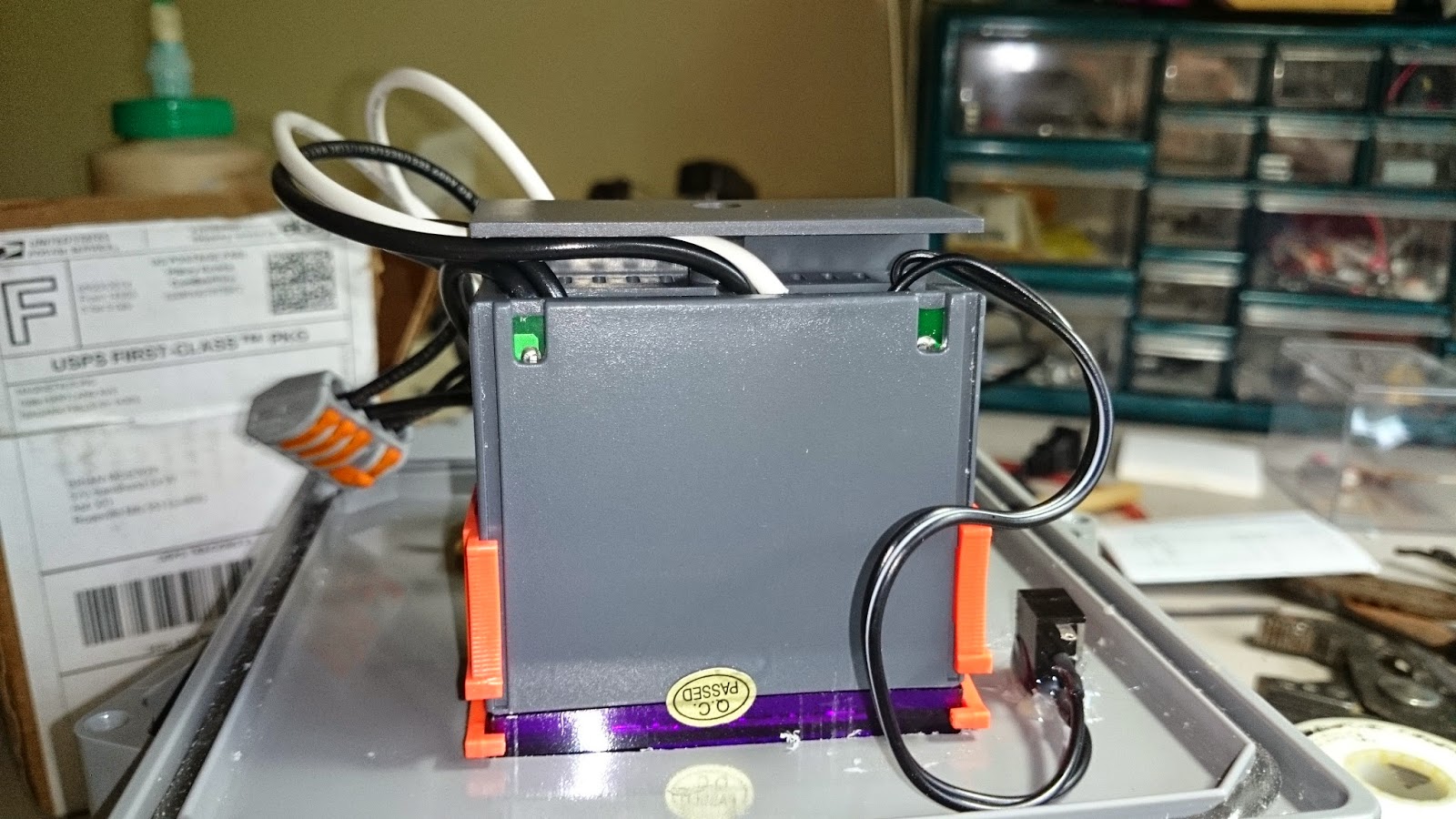 The wire lead ends of the temperature probe were stripped, tinned, and soldered to the terminals of a 3.5mm jack. Shrink tubing was used on each wire. The crimp supports on the jack were tightened onto the wires then the jack was sealed up. The temperature sensor construction was complete. 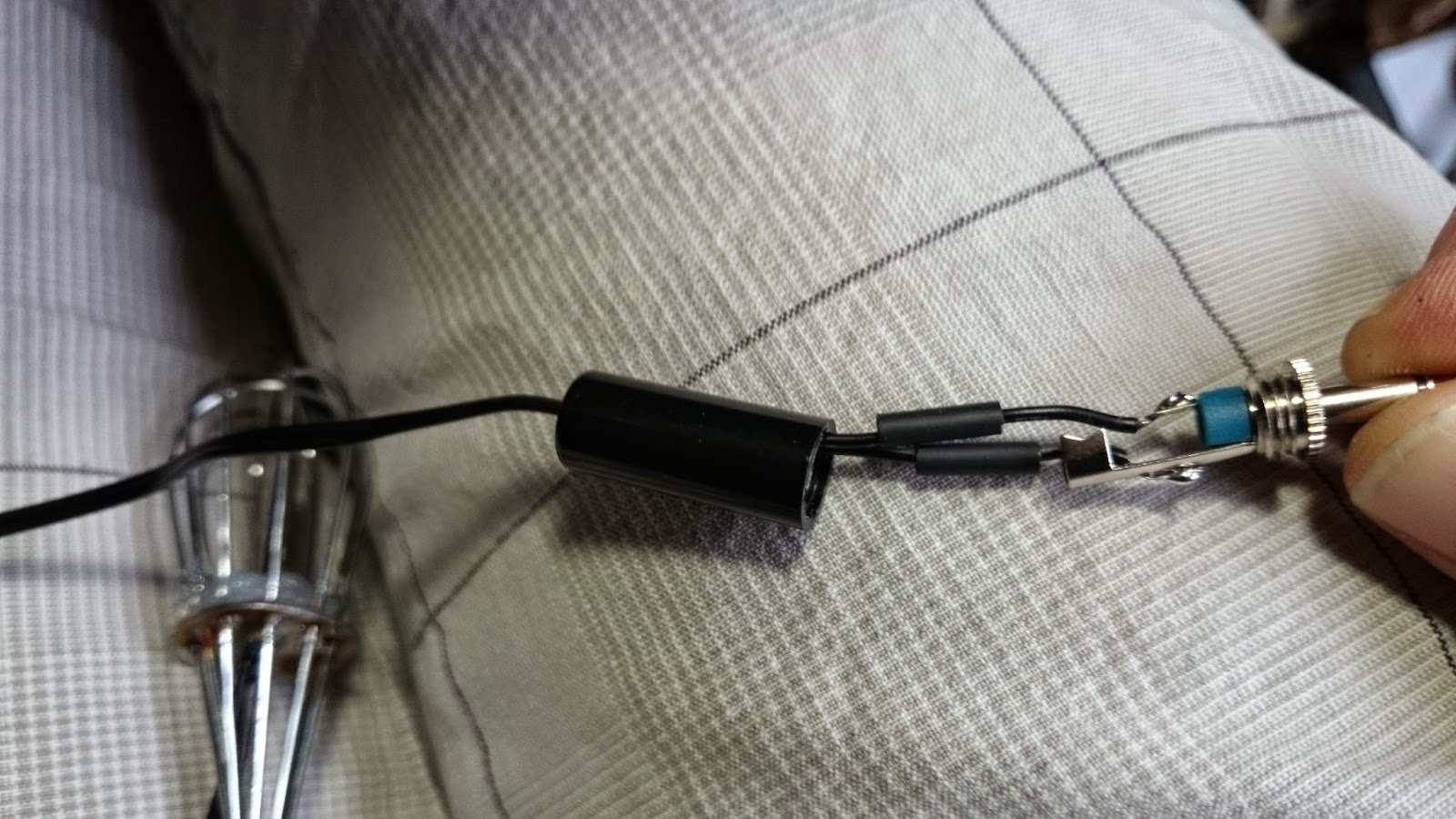 Shrink tube on a 3.5mm jack 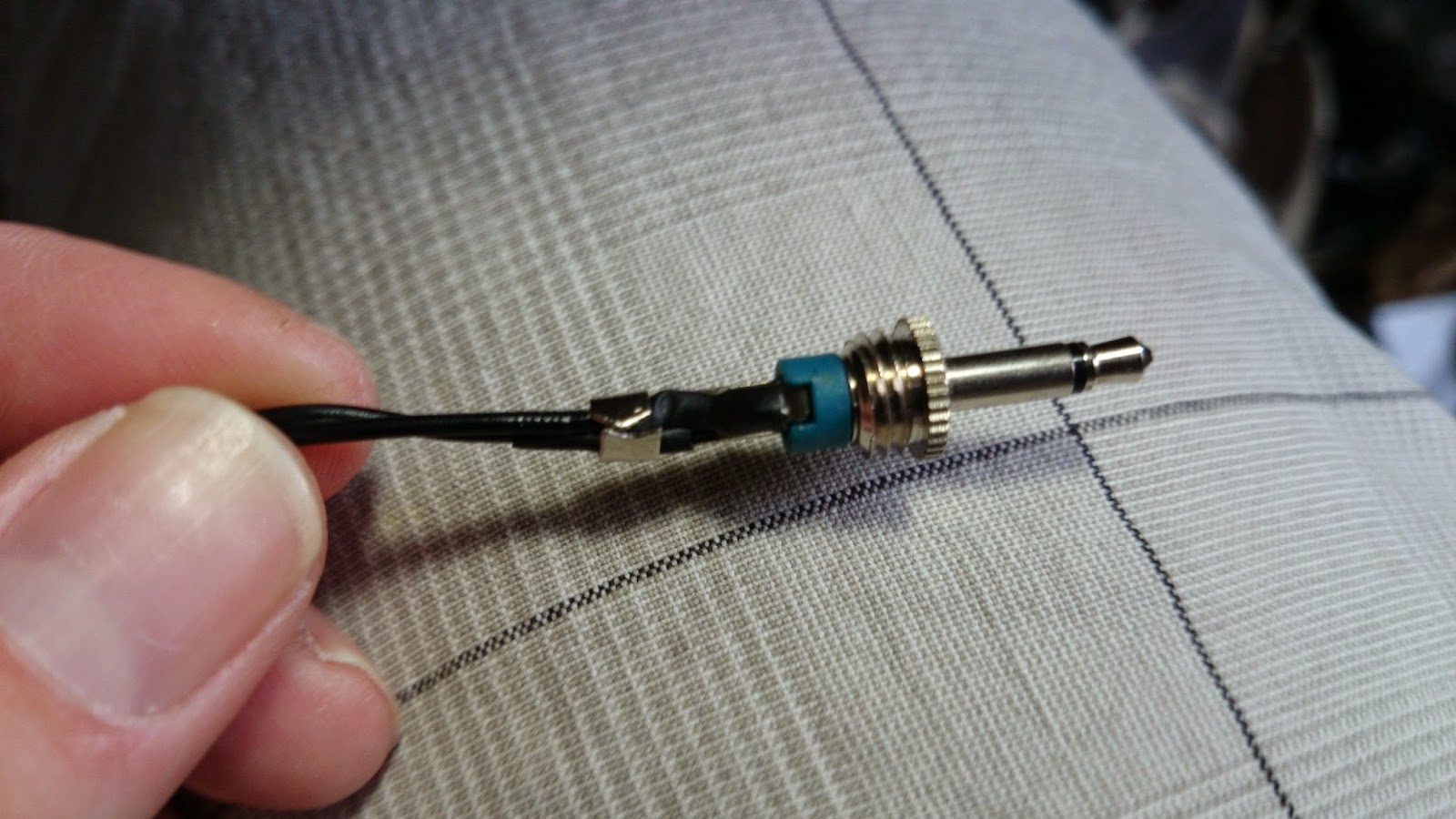 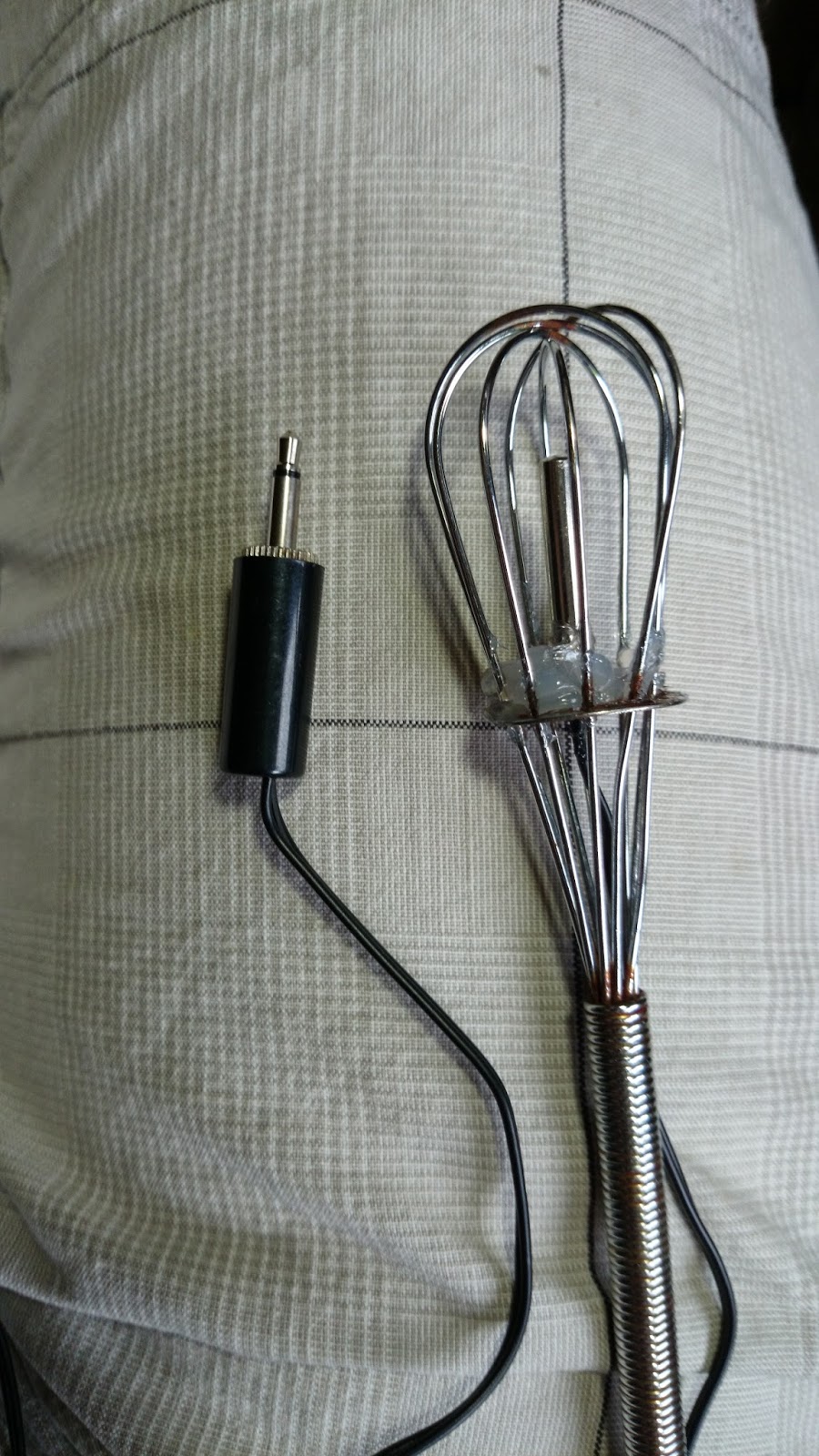 Testing showed that the controller would display a higher temperature than read by any other thermometer. This is hazardous since water controlled by this would be cooler than necessary and may not cook food thoroughly since it would not reach a safe temperature. This was tested by a digital IR thermometer and a kitchen dial thermometer. At higher temperatures the discrepancy between the IR, dial, and controller widened due to the logarithmic change of resistance. 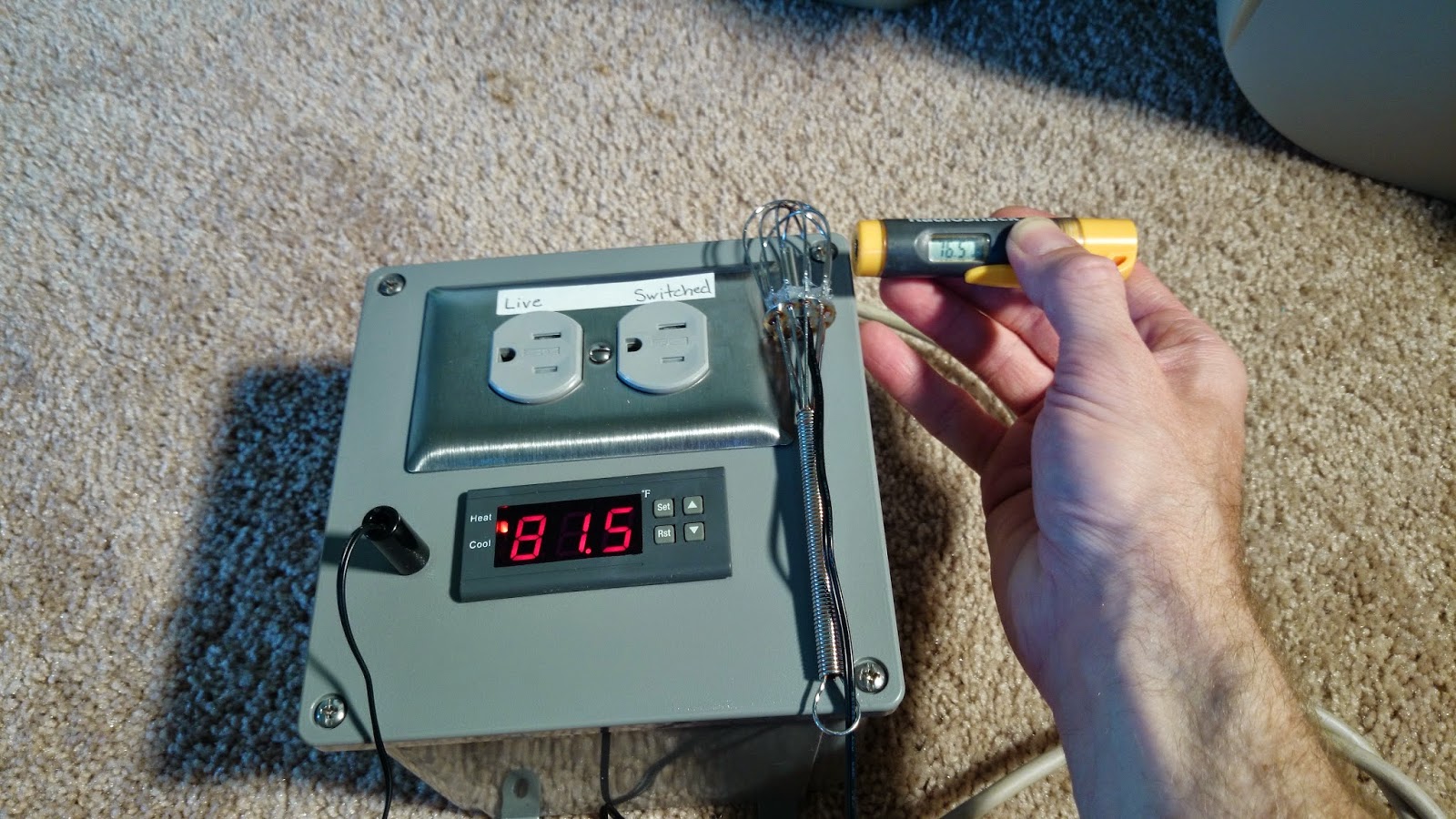 A digital thermometer disagrees with the controller 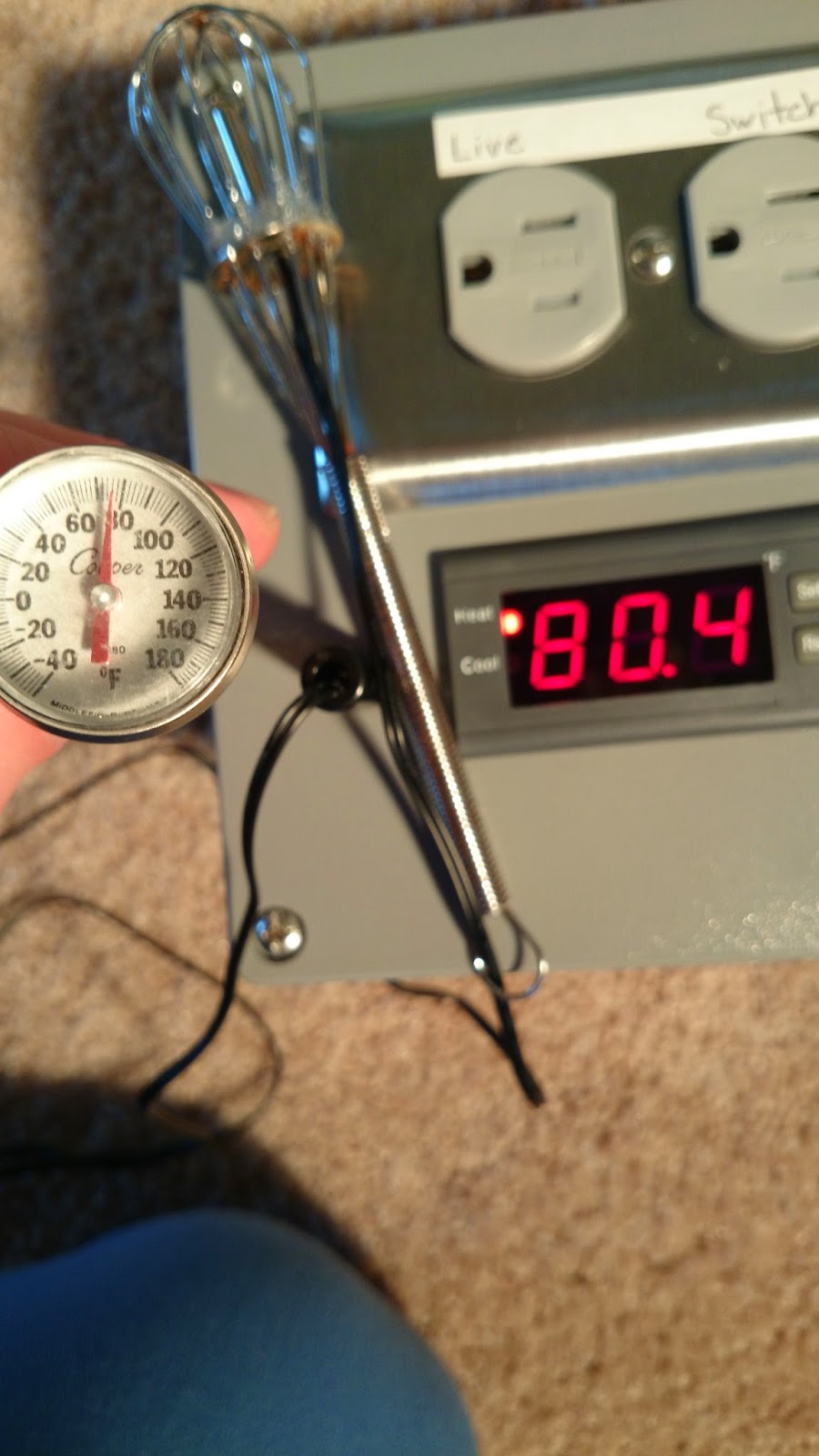 A dial thermometer disagrees with the controller 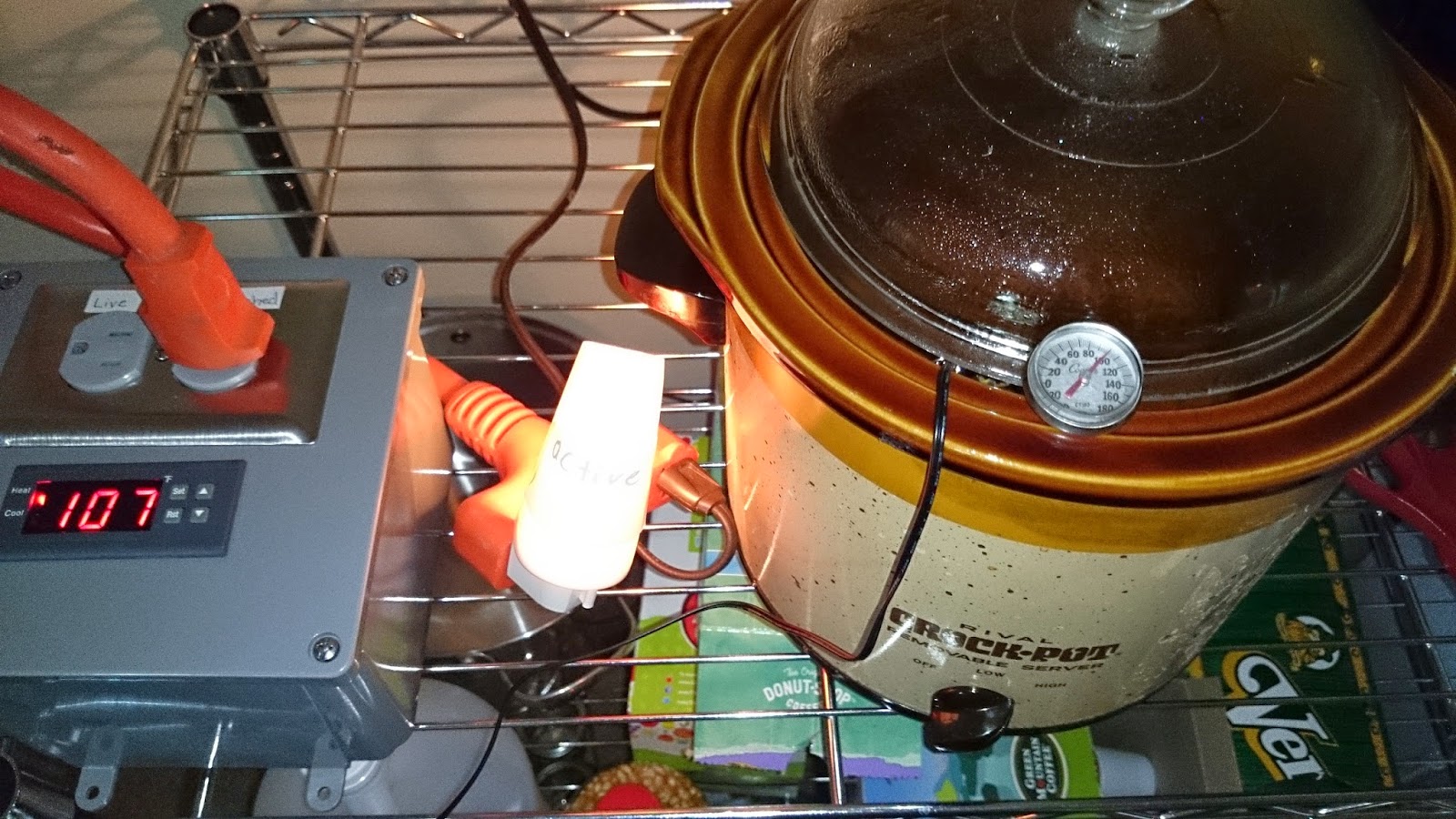 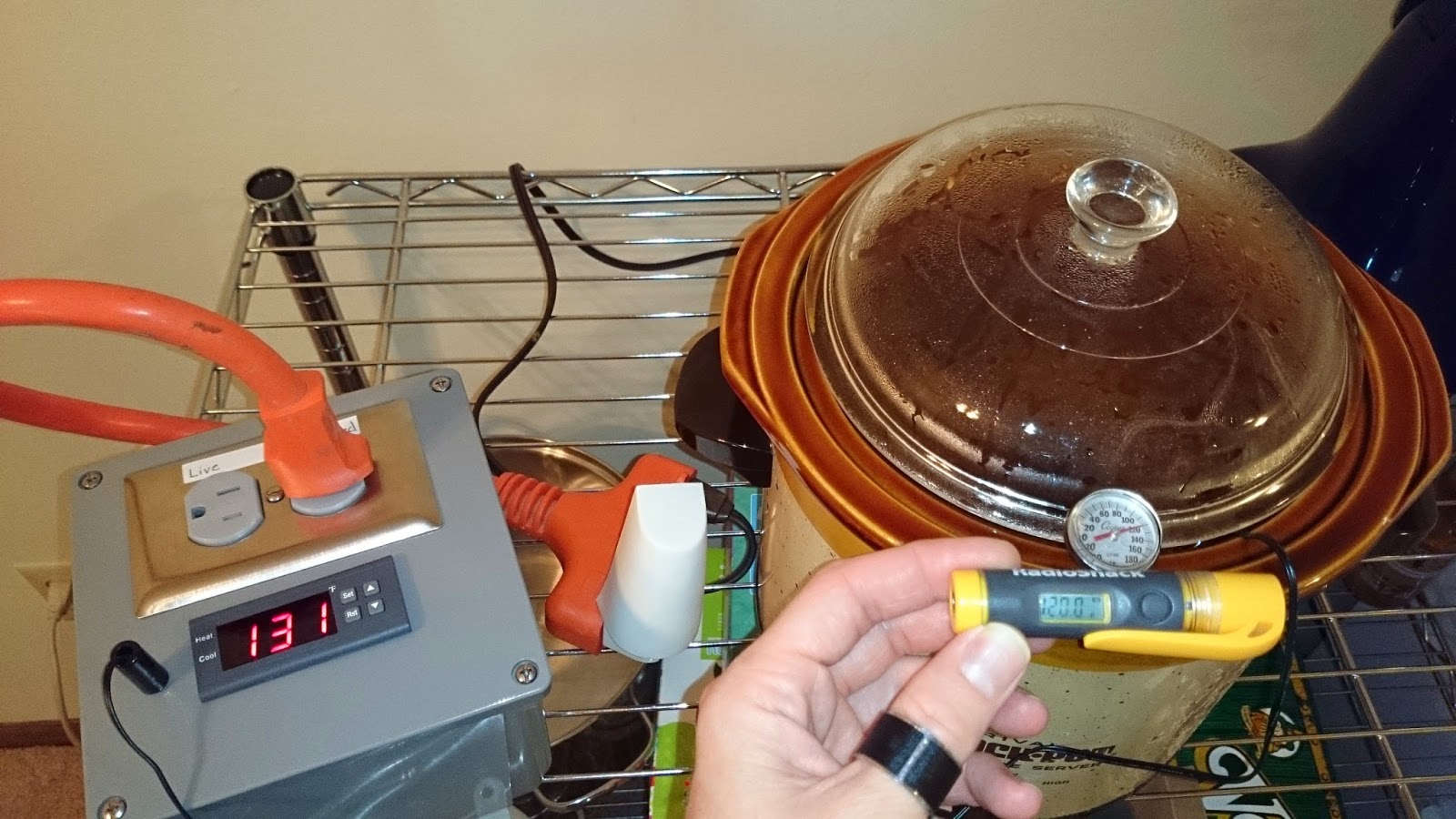 At even higher temperatures the discrepancy increases

Testing the controller's operation by cooling the water

To test against a known successful recipe using this controller two eggs were put in while the controller reported it was at 167º Fahrenheit. The first egg was cooked for fifteen minutes according to the chart from Sous Vide Supreme. An egg timer was also put into the oven which displays the doneness of eggs by changing color as heat permeates the timer and eggs. After fifteen minutes one egg was removed and the egg timer displayed it had reached the soft doneness point. The egg white was liquid and lumpy but the yolk was the correct consistency and flavor. 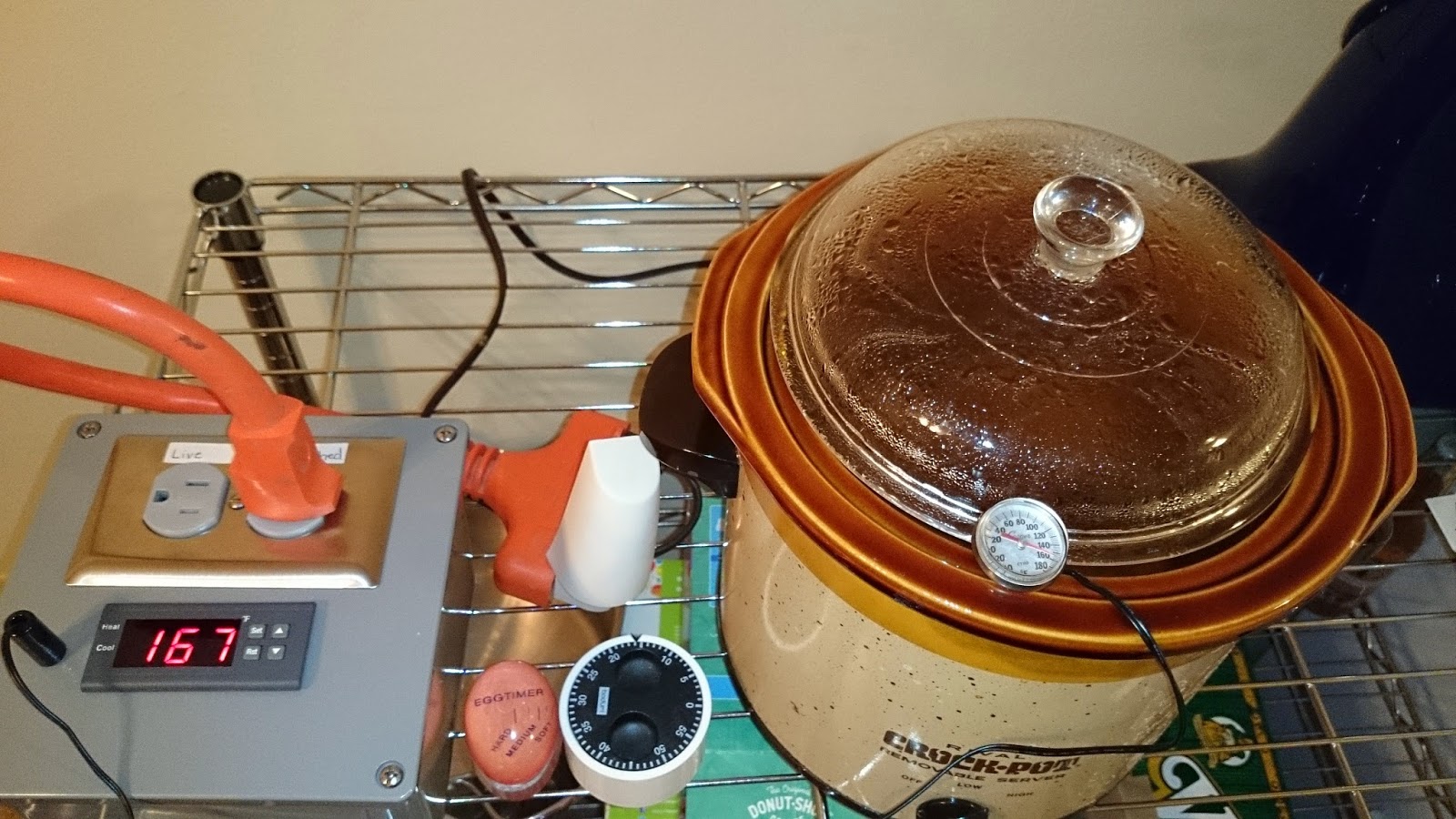 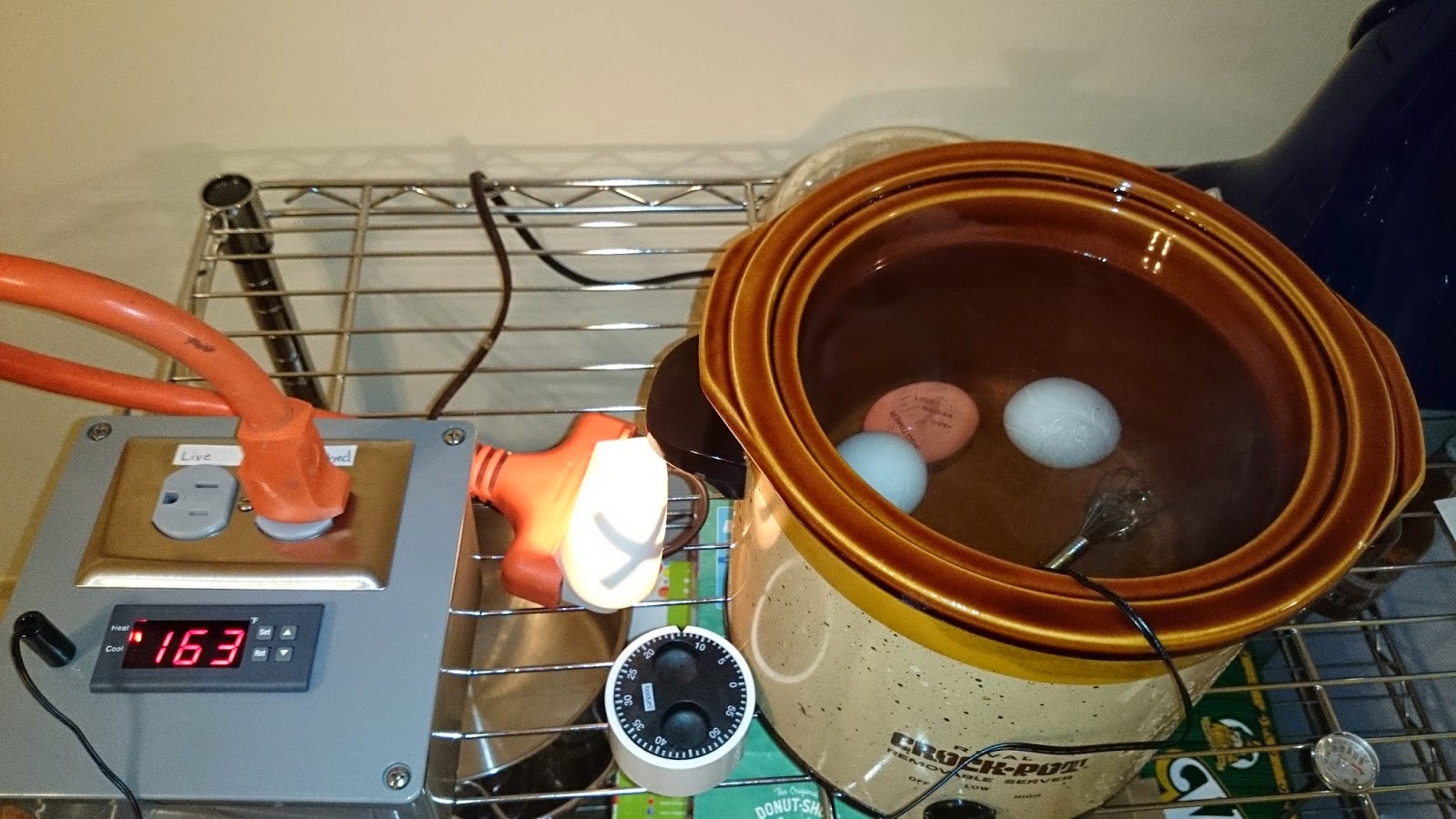 Eggs were put in and the temperature dropped 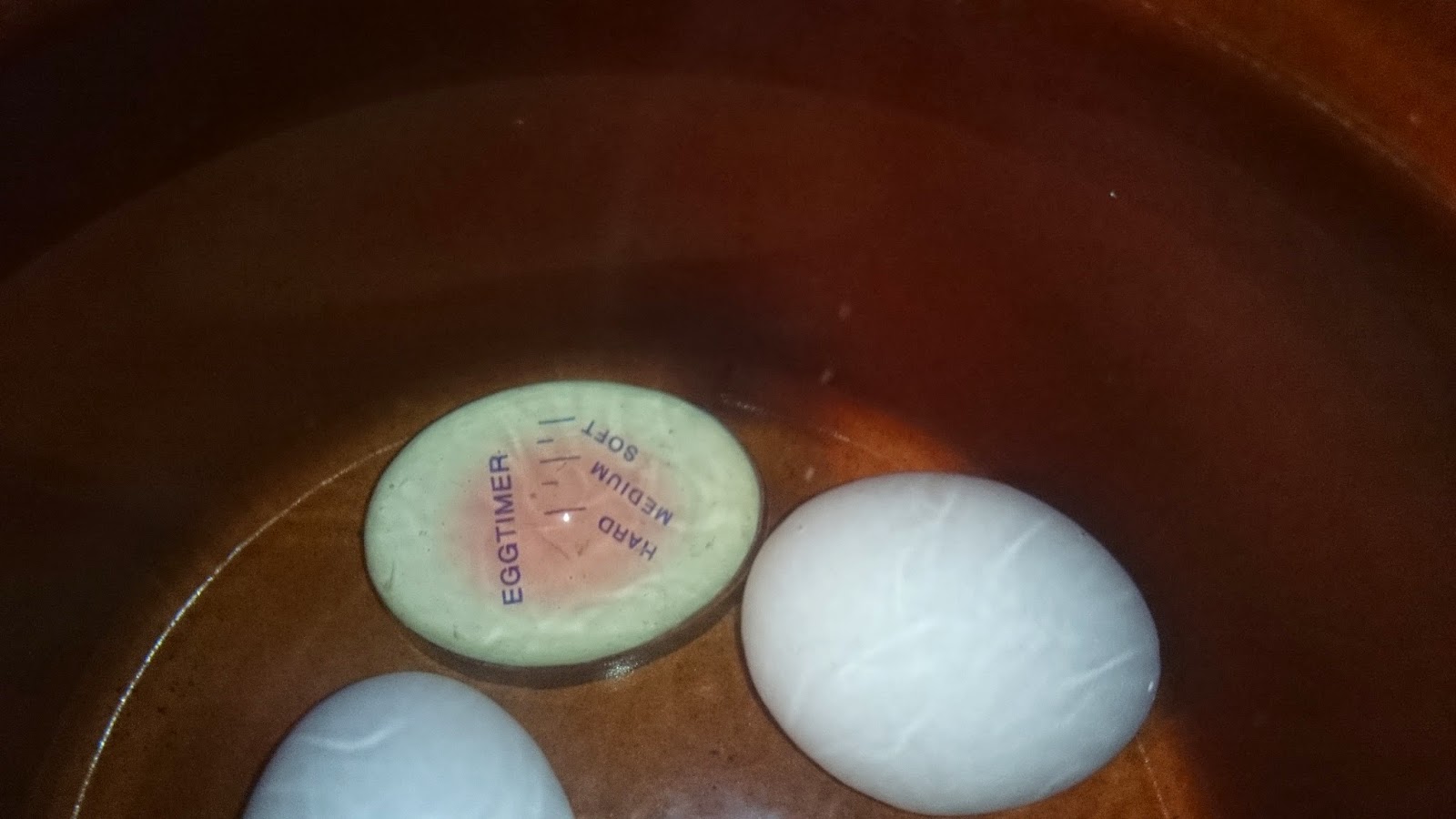 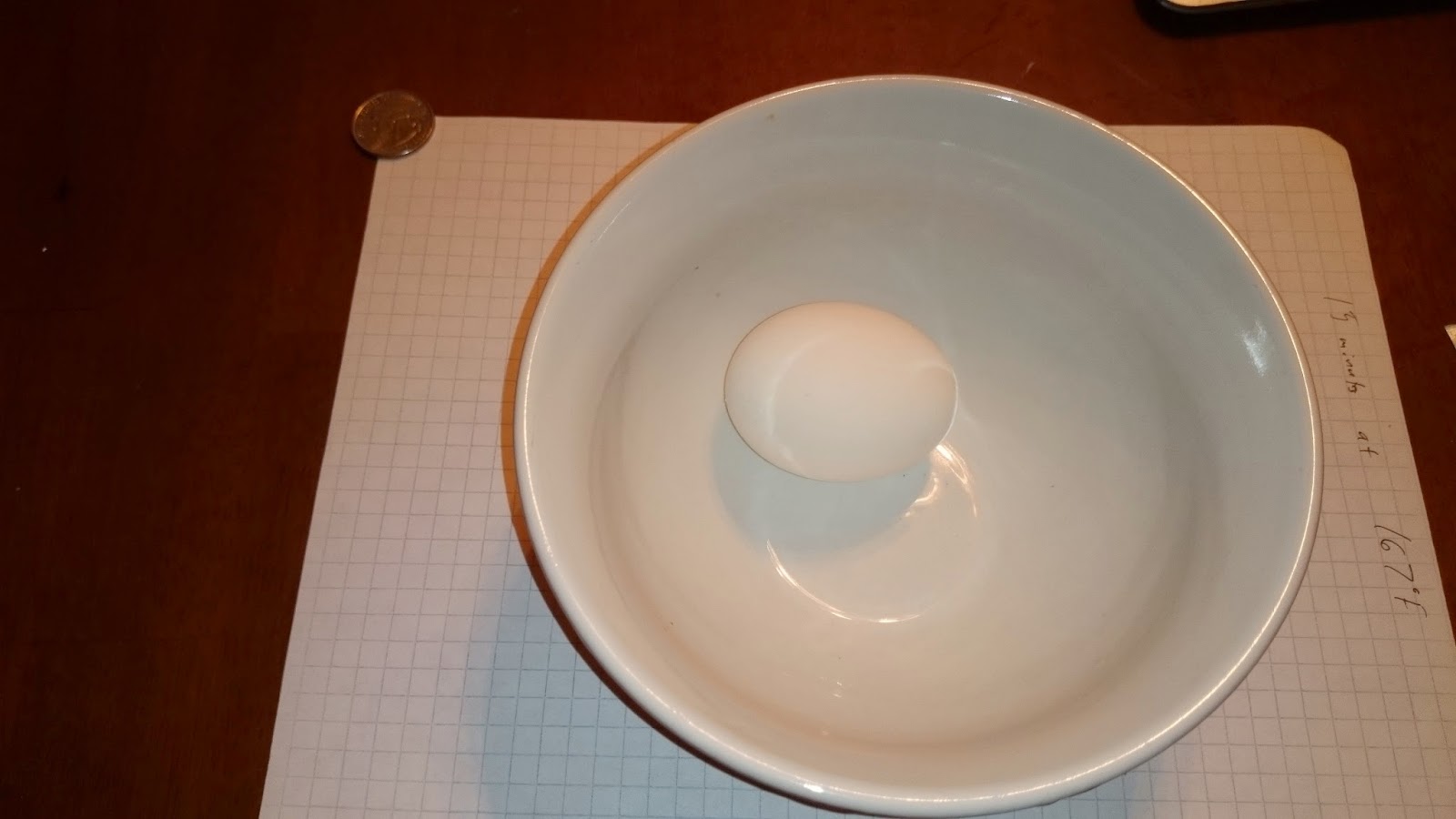 One egg cooked at 167ºFahrenheit for fifteen minutes 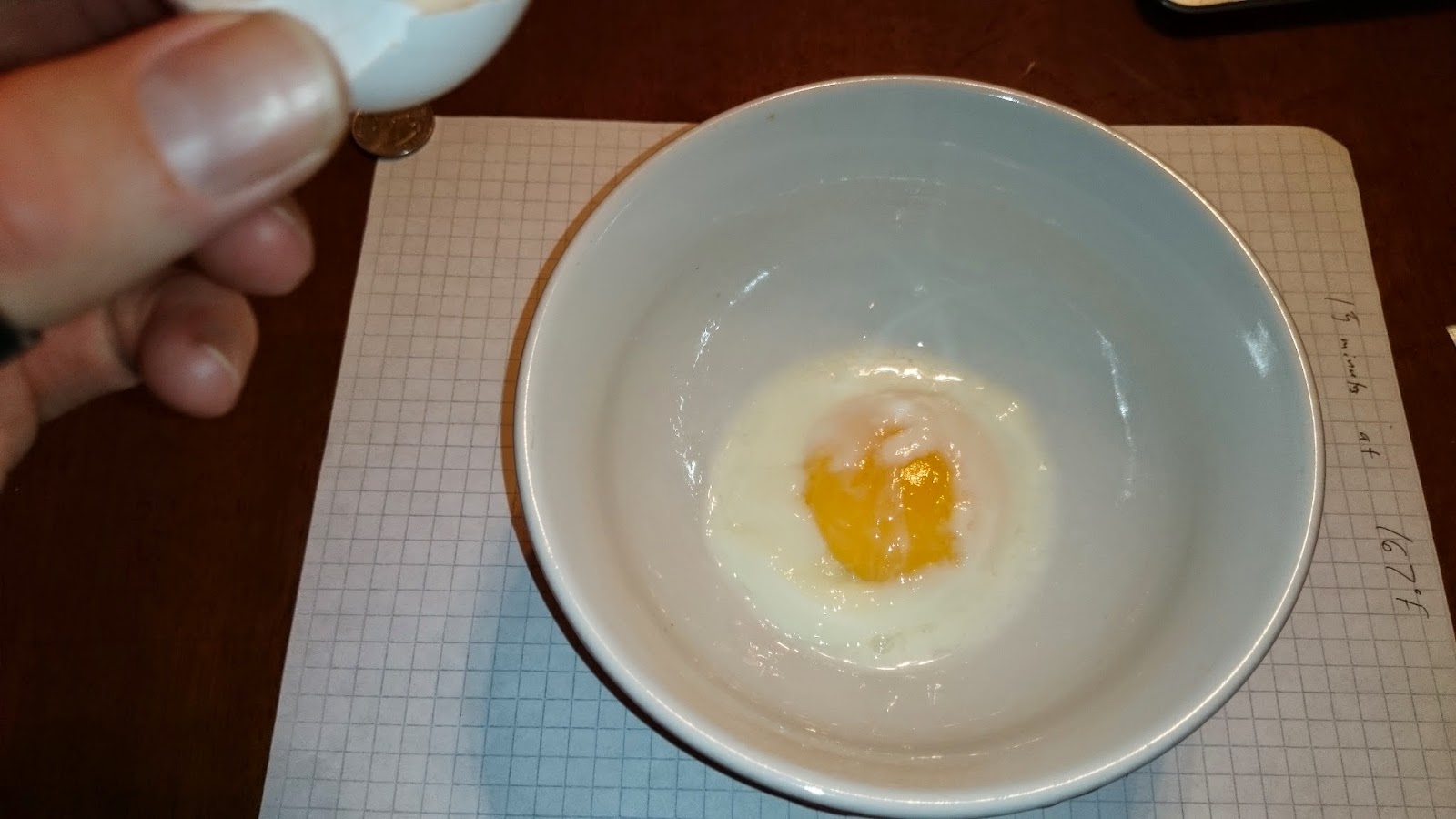 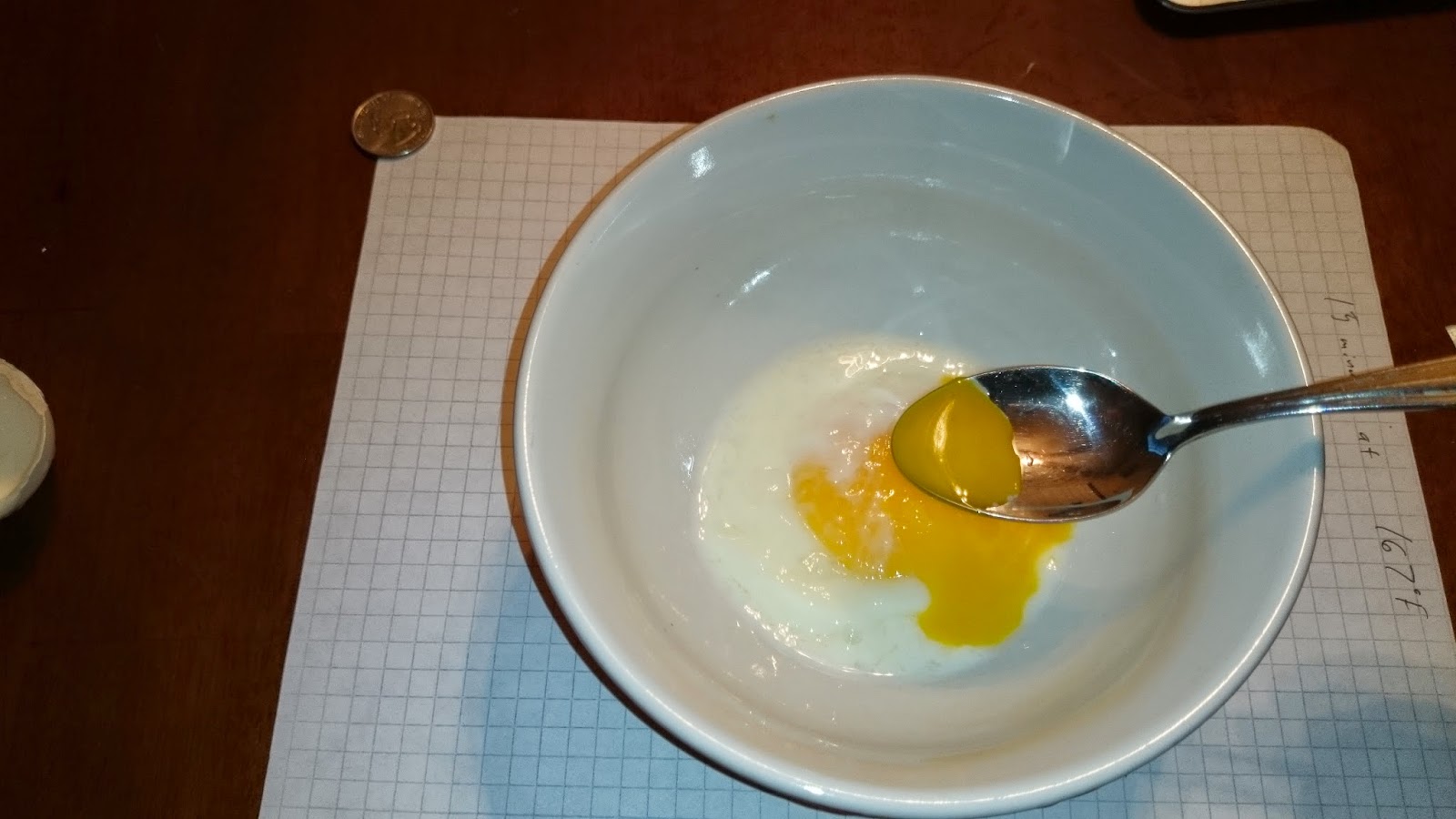 The second egg was removed after 23 minutes when the egg timer showed it to be fully heated. In this egg the white was still liquid and lumpy but the yolk had partially hardened. These symptoms suggest that the water was not sufficiently heated. To fix this problem two solutions were apparent at first. The first option is to make a chart showing the desired water temperature and the temperature to set on the controller. The second option is to insert a potentiometer or rheostat to change the temperature reading so that a calibration is possible. 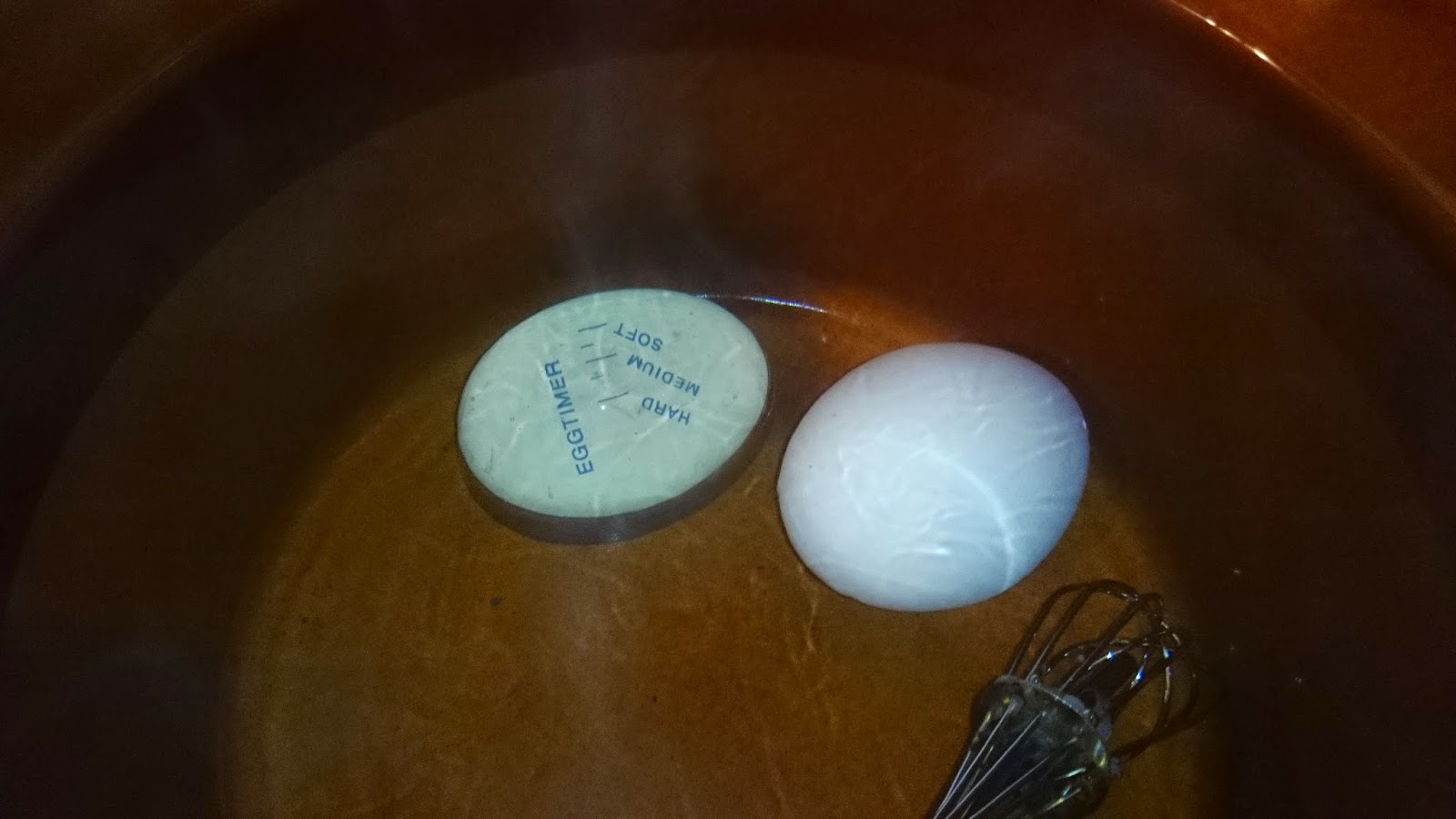 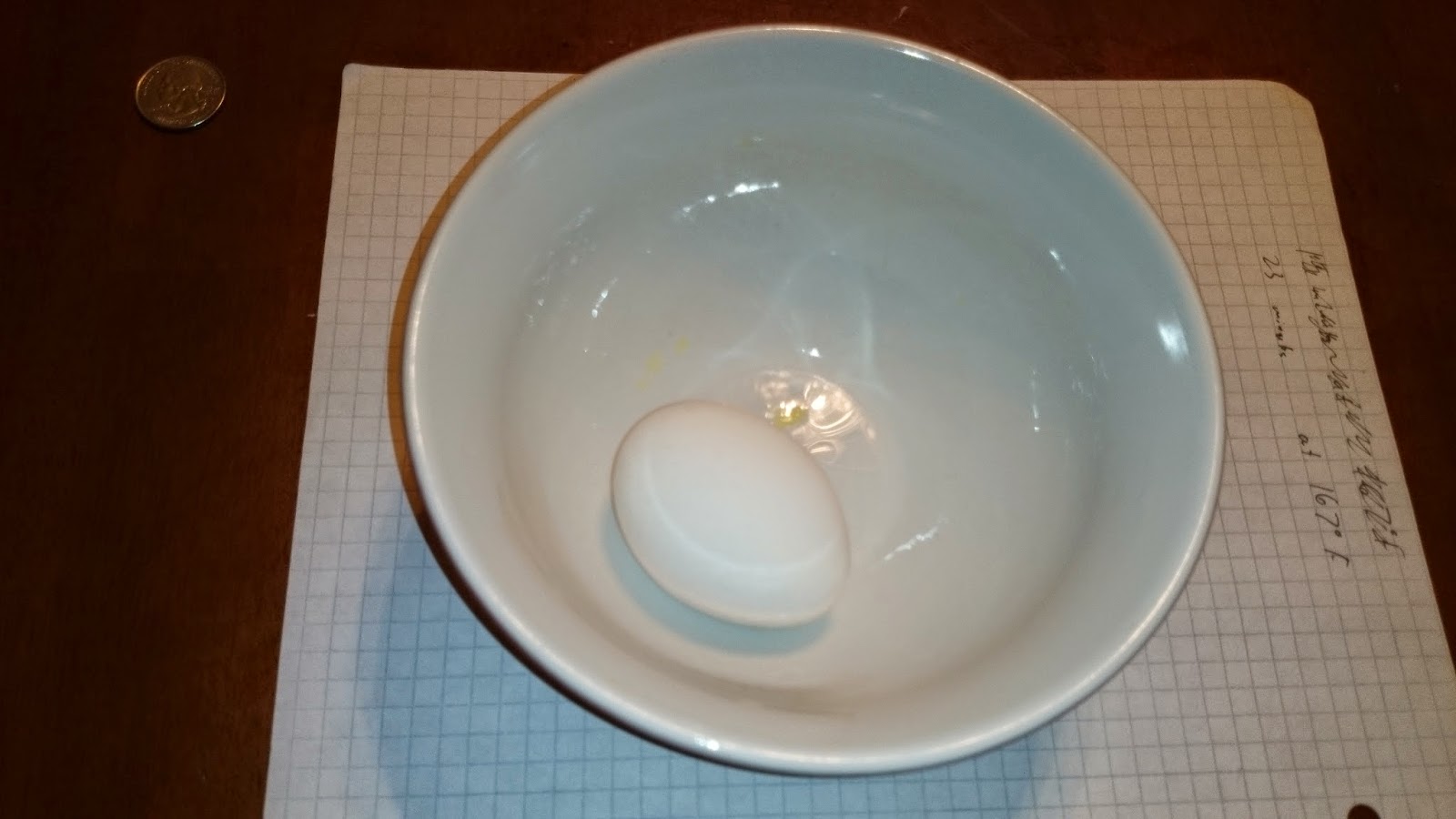 If people reproduced this project and did not encounter a discrepancy with the thermometer they would be done with the build. 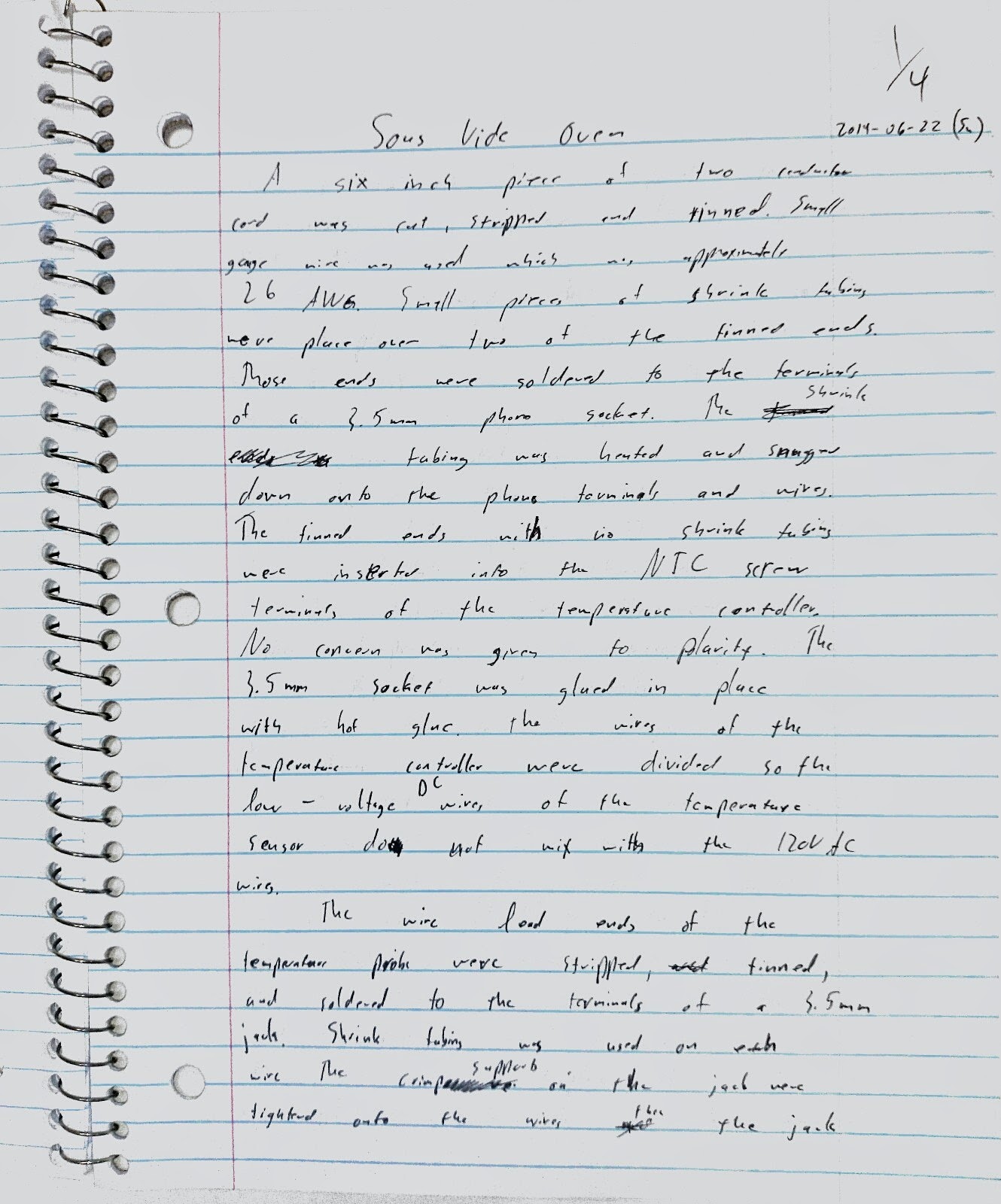 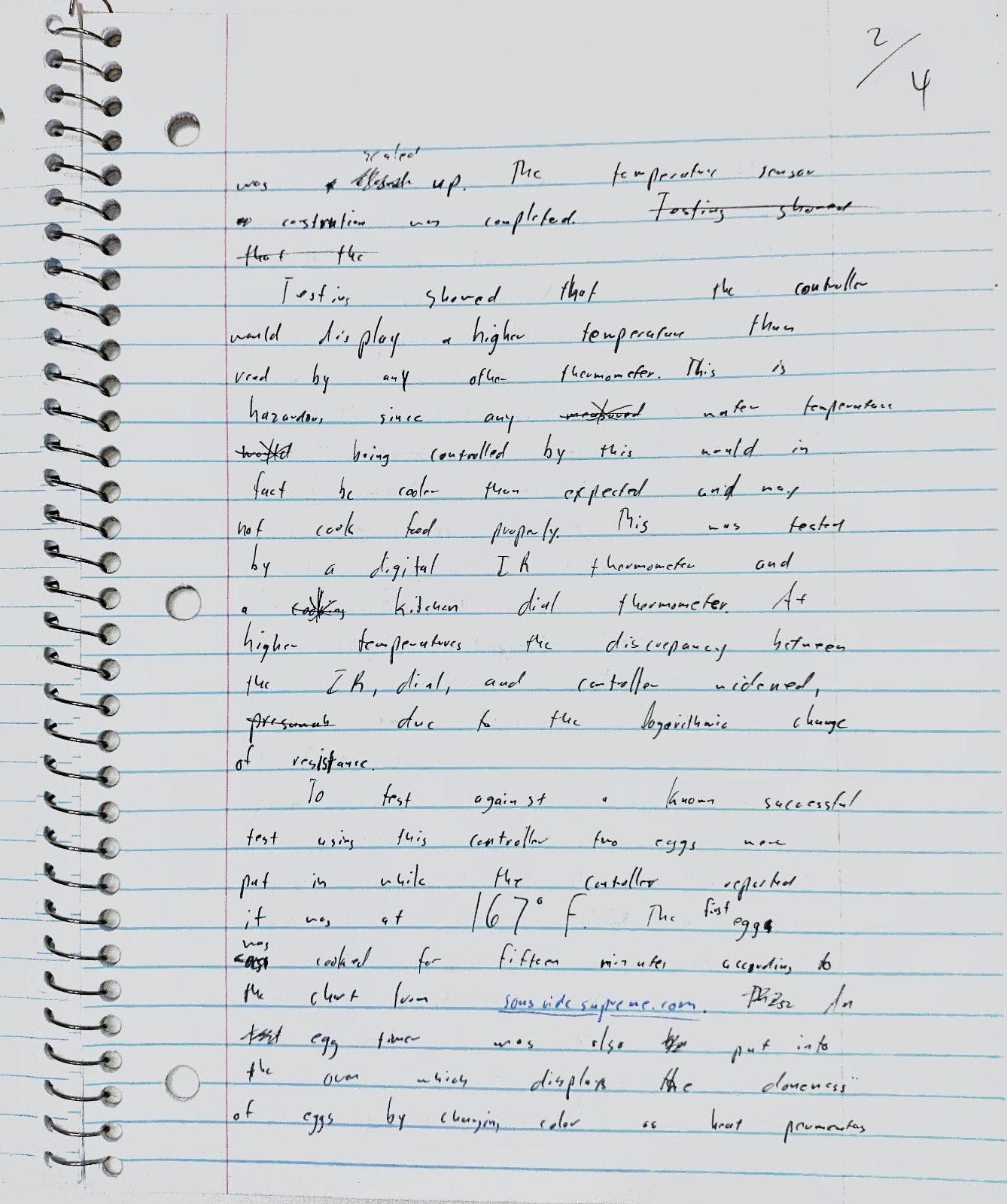 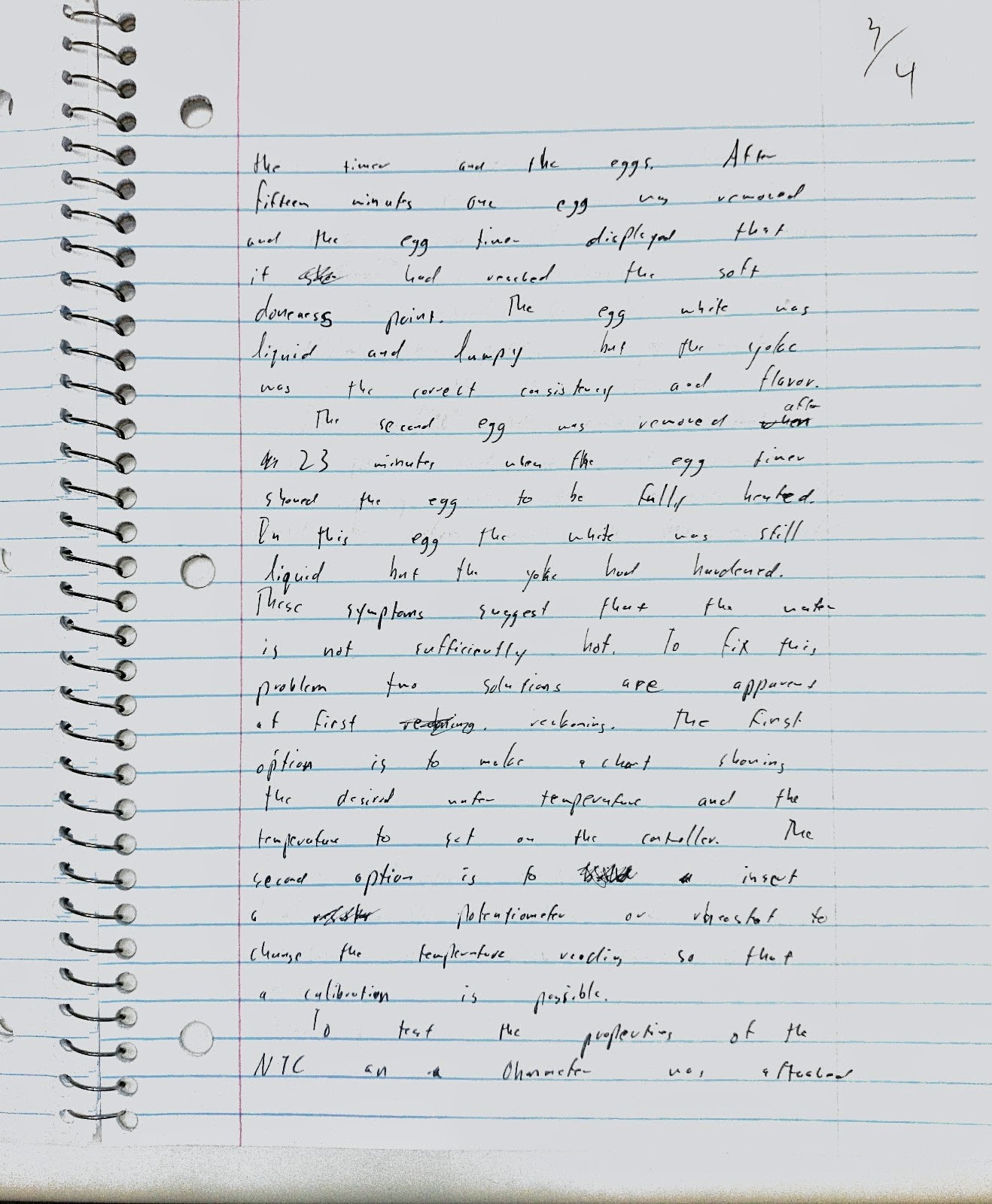 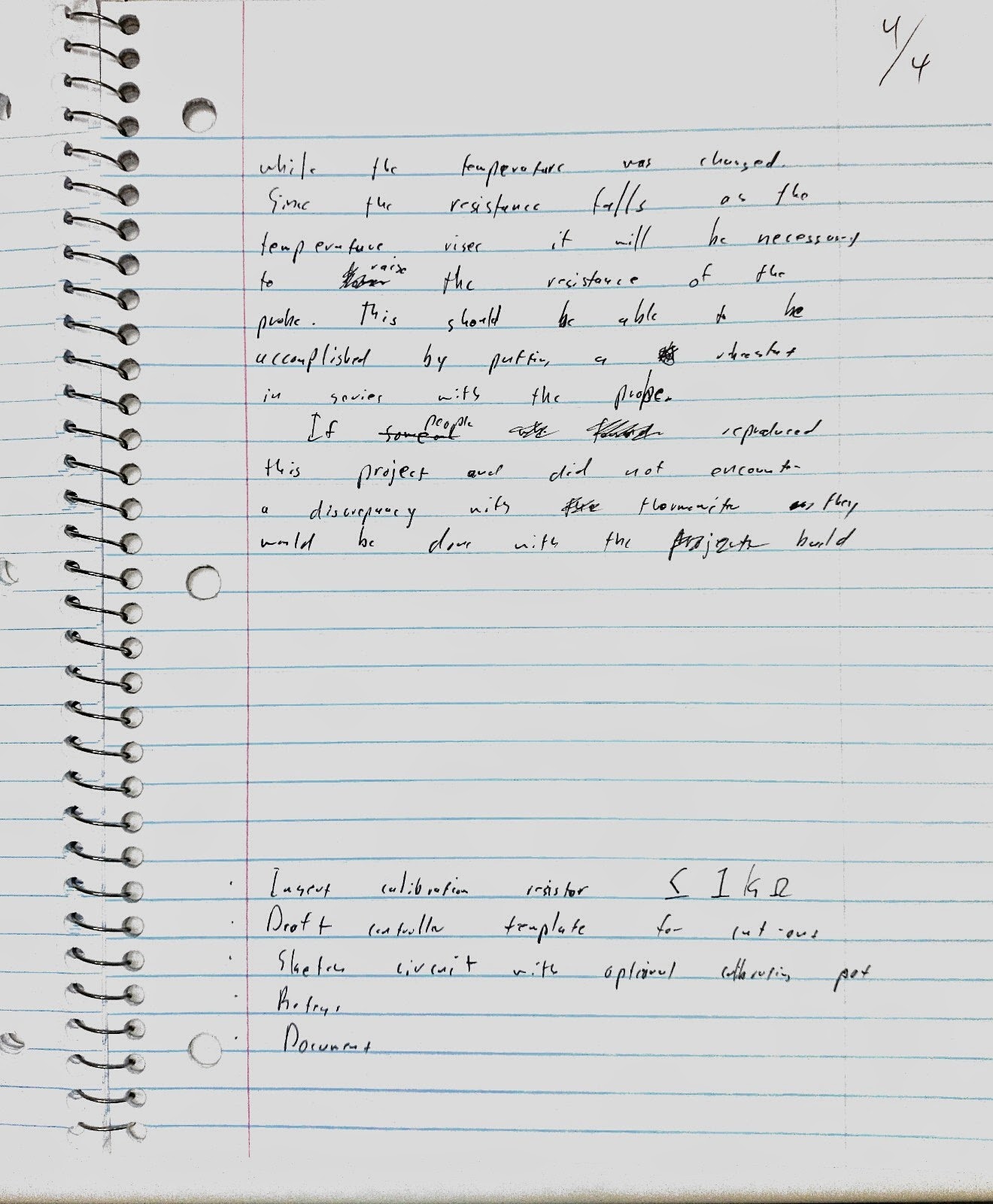