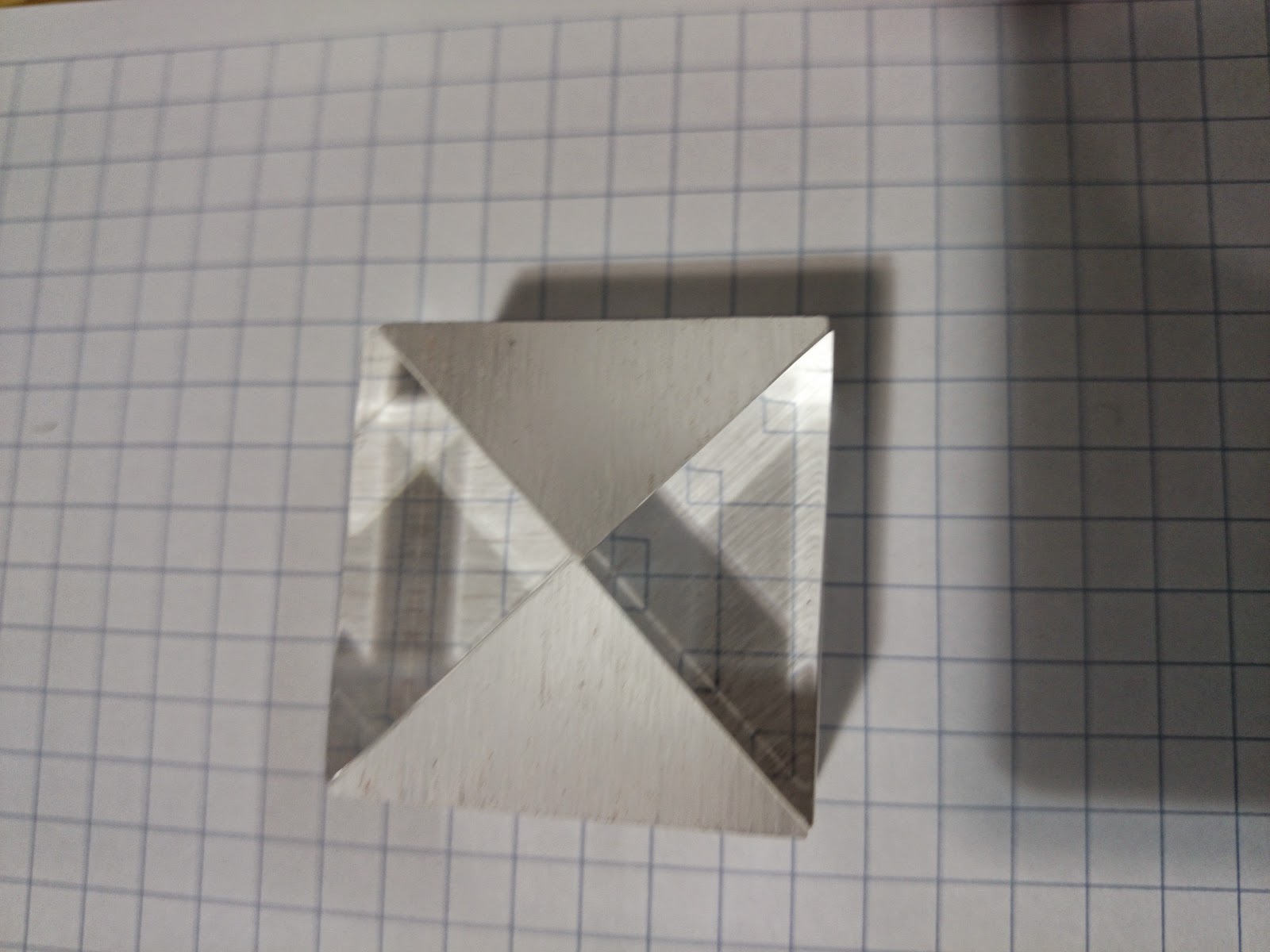 3D photography isn't hard to find. The HTC EVO 3D has a dual lens camera for taking 3D pictures. A few consumer cameras came out which had two lenses and screens that can display in 3D without eyewear.  Dual lens 35mm cameras existed a long time ago for taking photographs to go in special slide viewers. Video cameras would be outfitted with red and blue filters to make the 3D movies where people wore the blue and red paper glasses.

The common theme of cameras made before is they all have two lenses. I wanted to make an adapter so an ordinary camera could take a split screen stereoscopic picture. To do this I wanted to arrange four prisms so one half of a picture would be taken a few centimeters to the left of the camera lens and the other half of the picture would be taken a few centimeters to the right of the camera lens. The overall picture could be printed and place in a stereoscopic viewer or the camera could be placed in the viewer or any number of stereoscopic viewers like the LEGO Virtual Reality Visor.

A 100mm (4 inch) right angle prism was purchased with the intention of cutting it into four pieces. The prism was made from plastic, likely acrylic resin. To ensure equal sized pieces a jig was made from scrap wood. An end was shortened so it could pass under the guard of a band saw while pushing a prism. Part of the removed wood was cut away, sanded smooth, and screwed into place 24 mm from the end. The 24mm was to allow for some loss due to the cutting blade. The actual length of the right angle prism was slightly long than 100mm. The jig was placed against the saw blade and held to the table sled with two clamps. 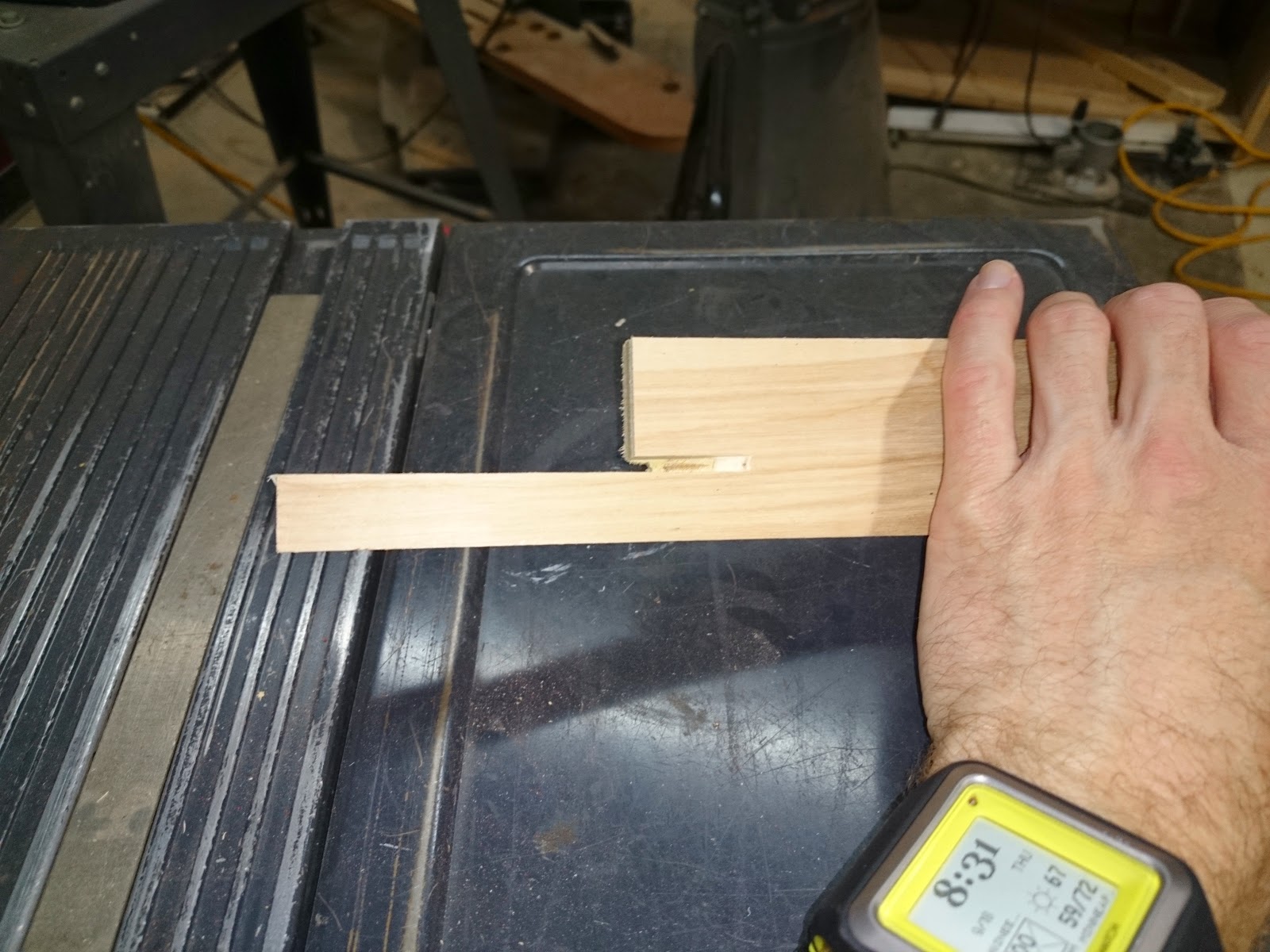 Scrap wood shortened on one side 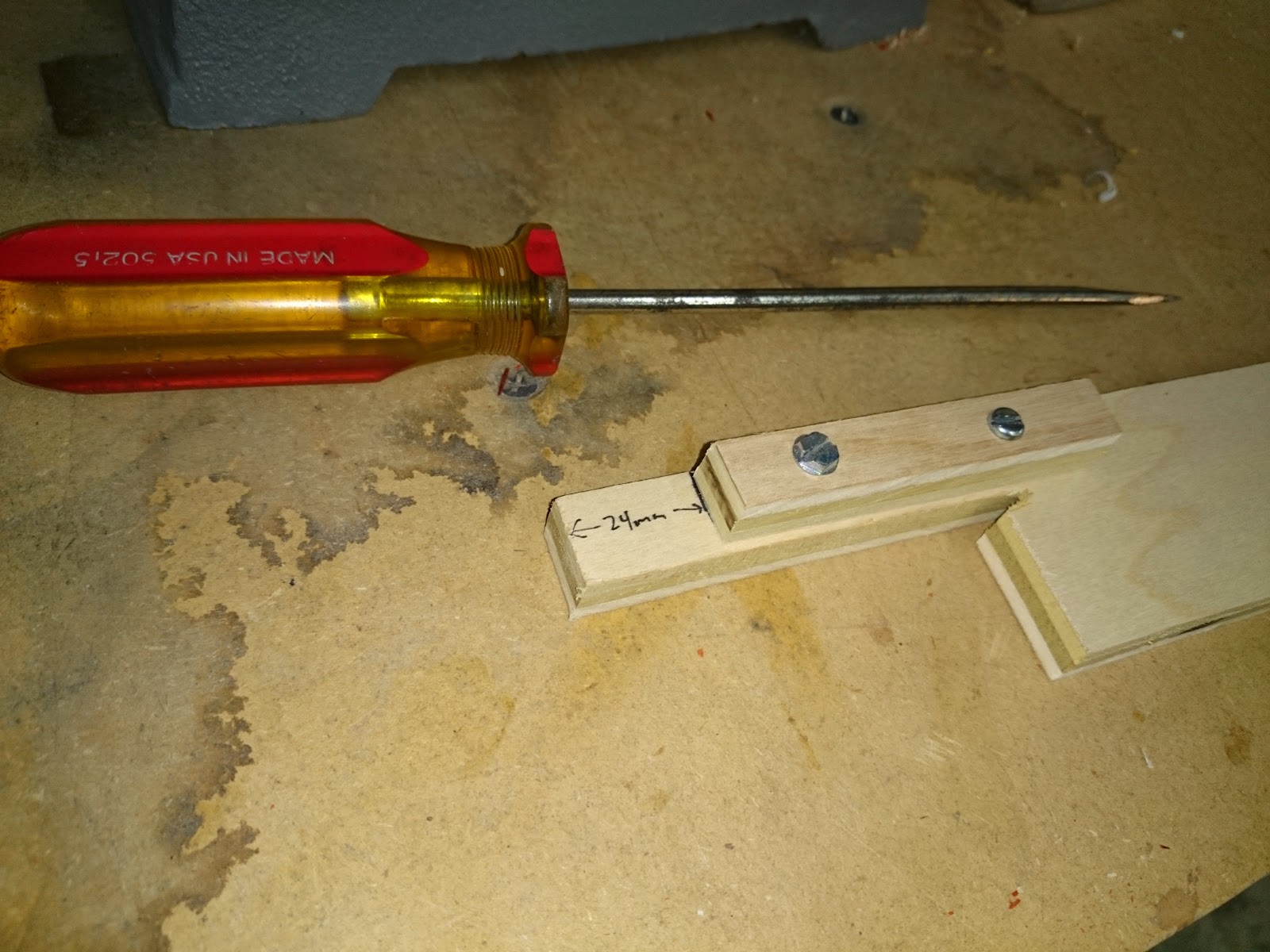 24mm gap from the end of the shortened wood 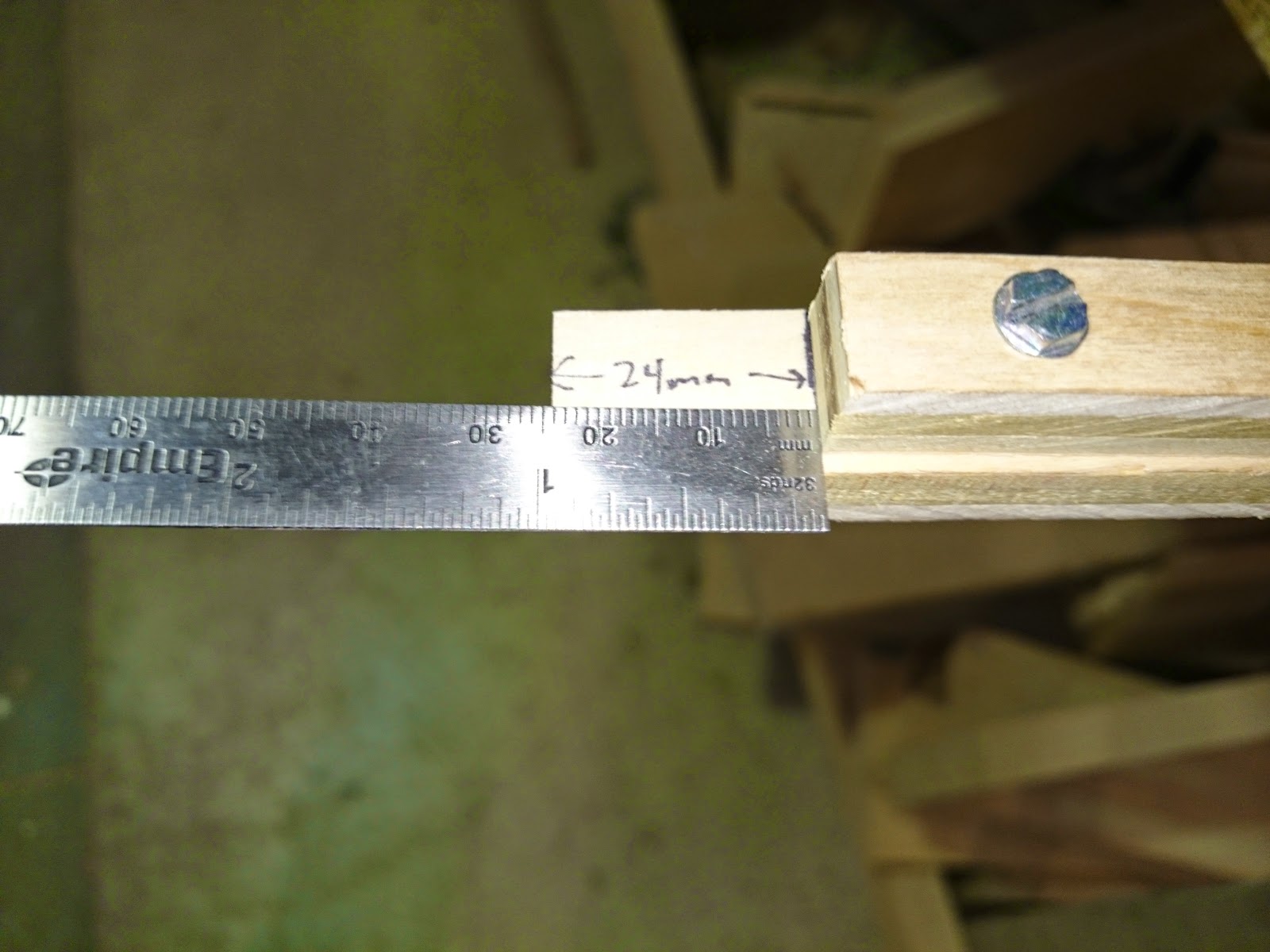 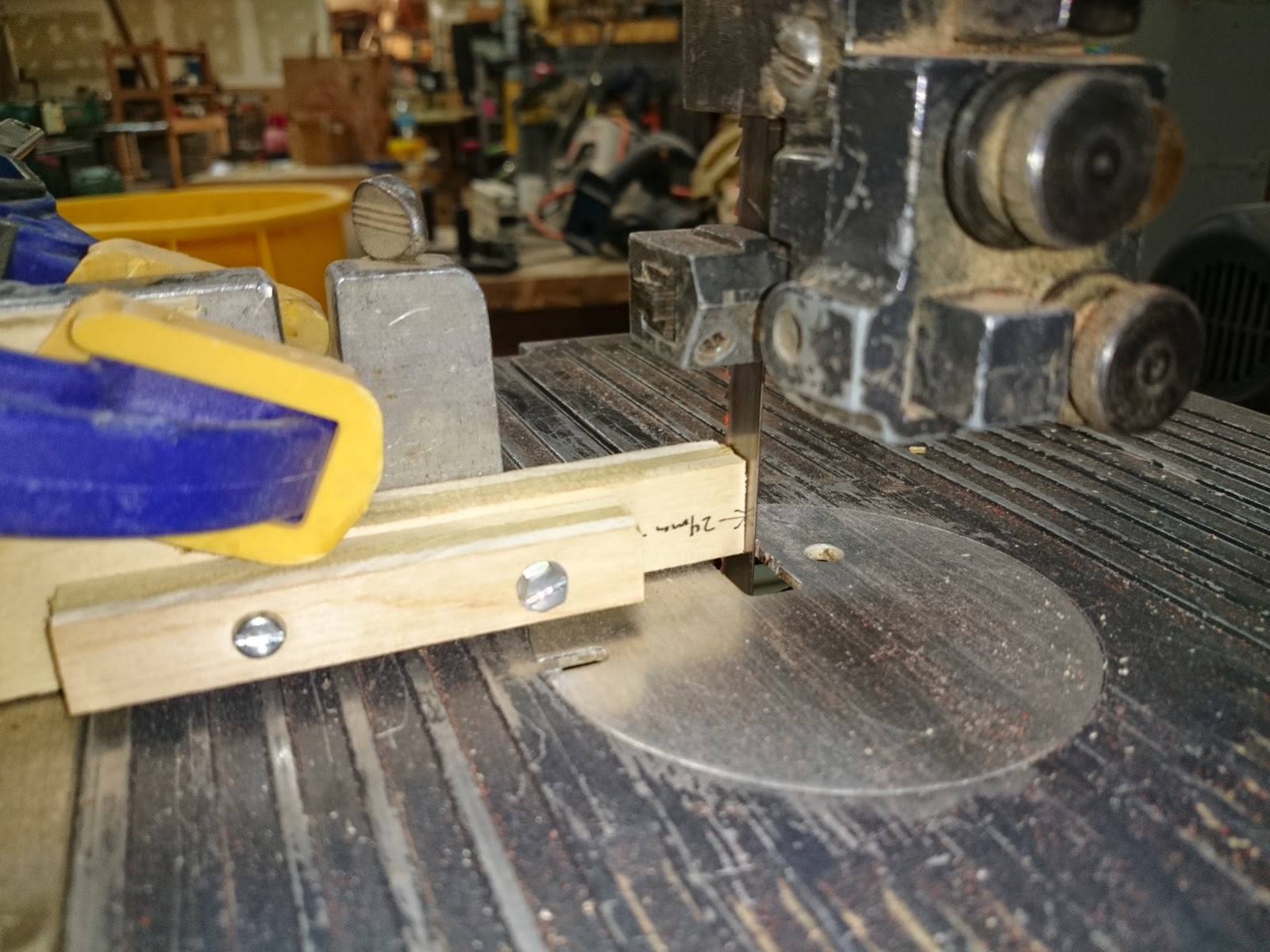 Placement of the jig

Tape was applied to the surface of the prism so it would not be scratched when slid along the band saw's table. The tape was placed and trimmed so it would not interfere with the cutting. Four identical pieces were cut with a 3mm slice left over. The first three pieces were cut with the prism on the hypotenuse side touching the table. The last piece was switched so the right angle was between the table and the vertical face of the jig. This angle was the most practical and would be used again if another model was made using cut prisms. 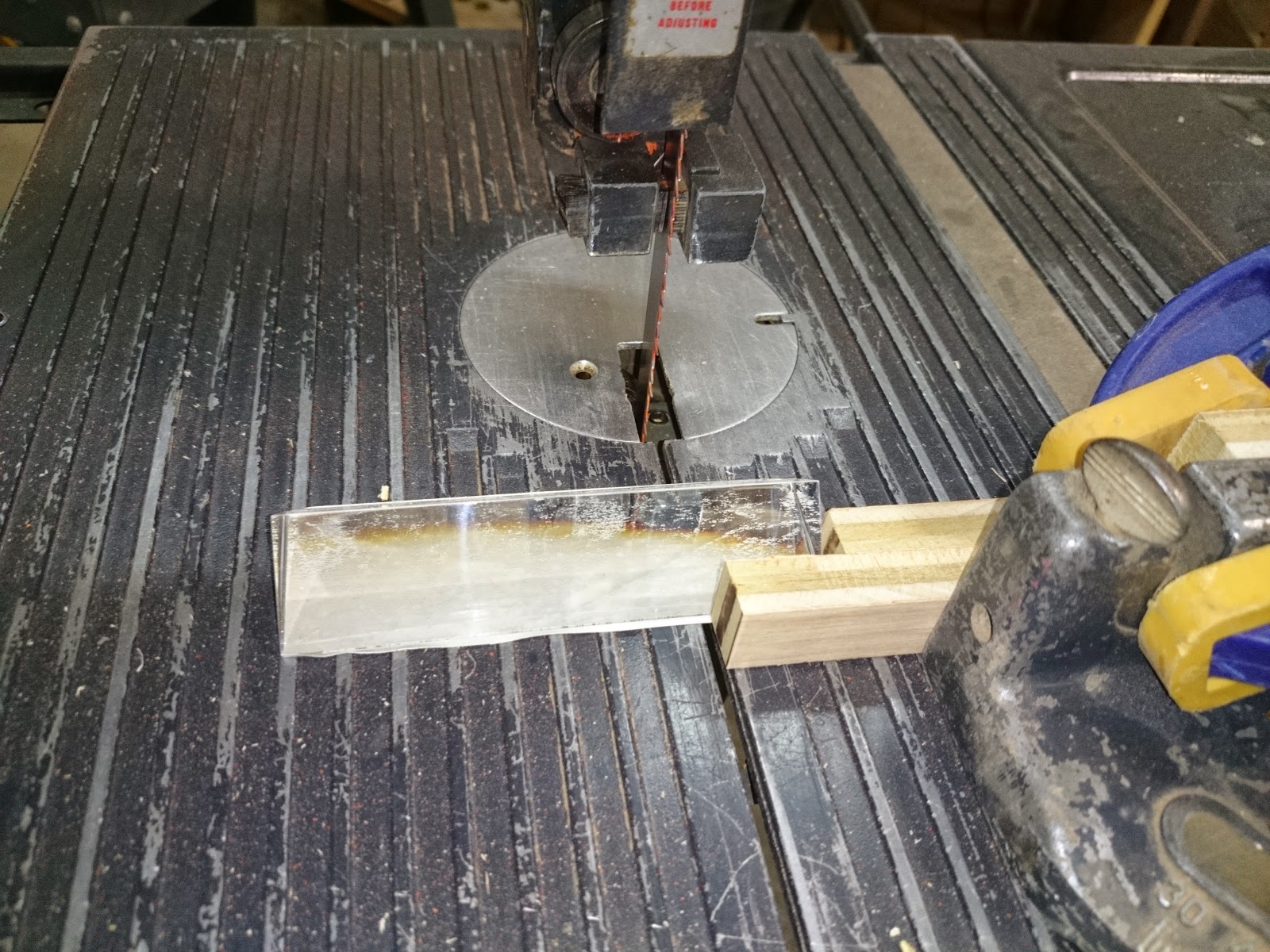 Table sled used to push the prism through the cutting blade 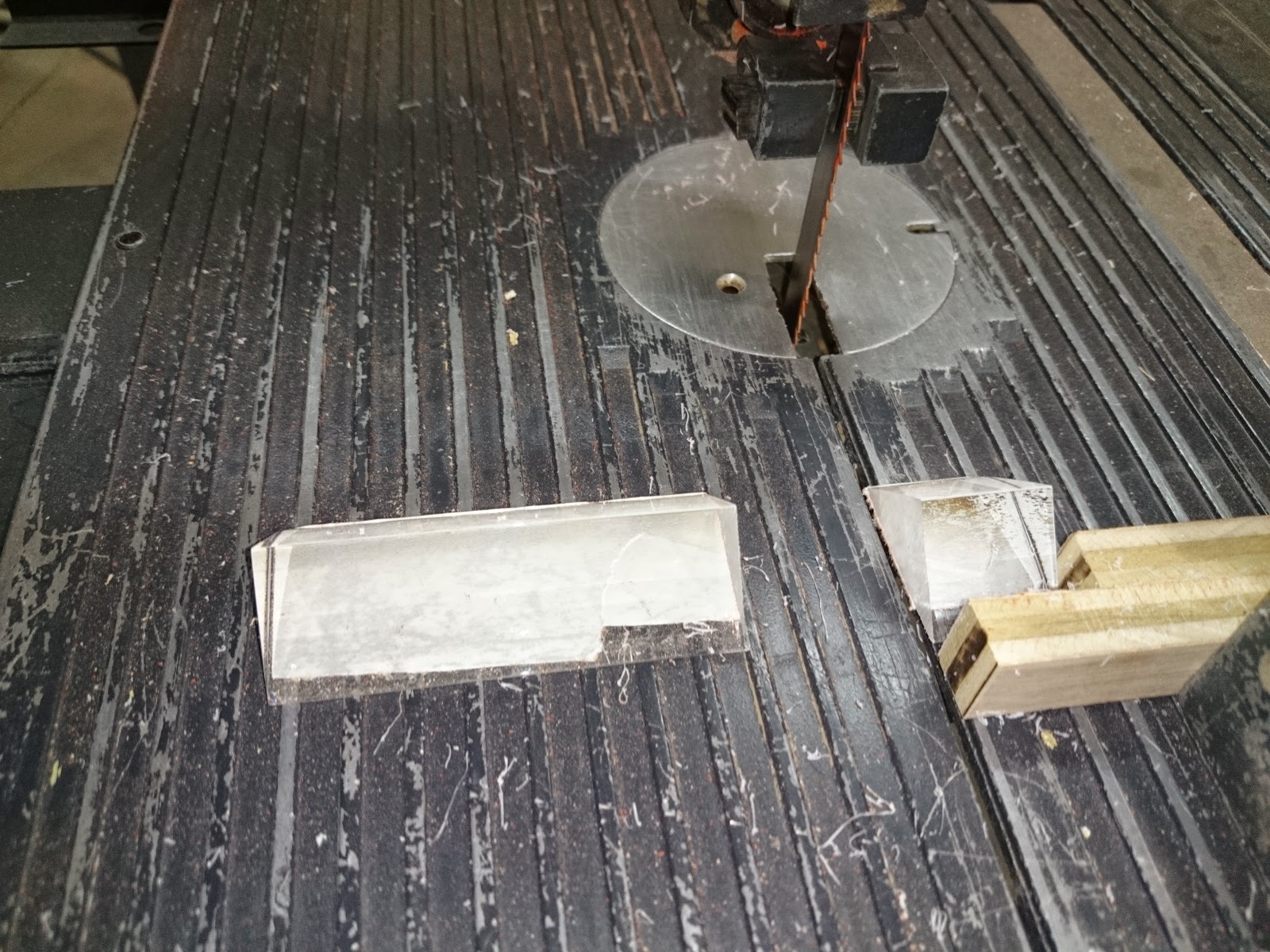 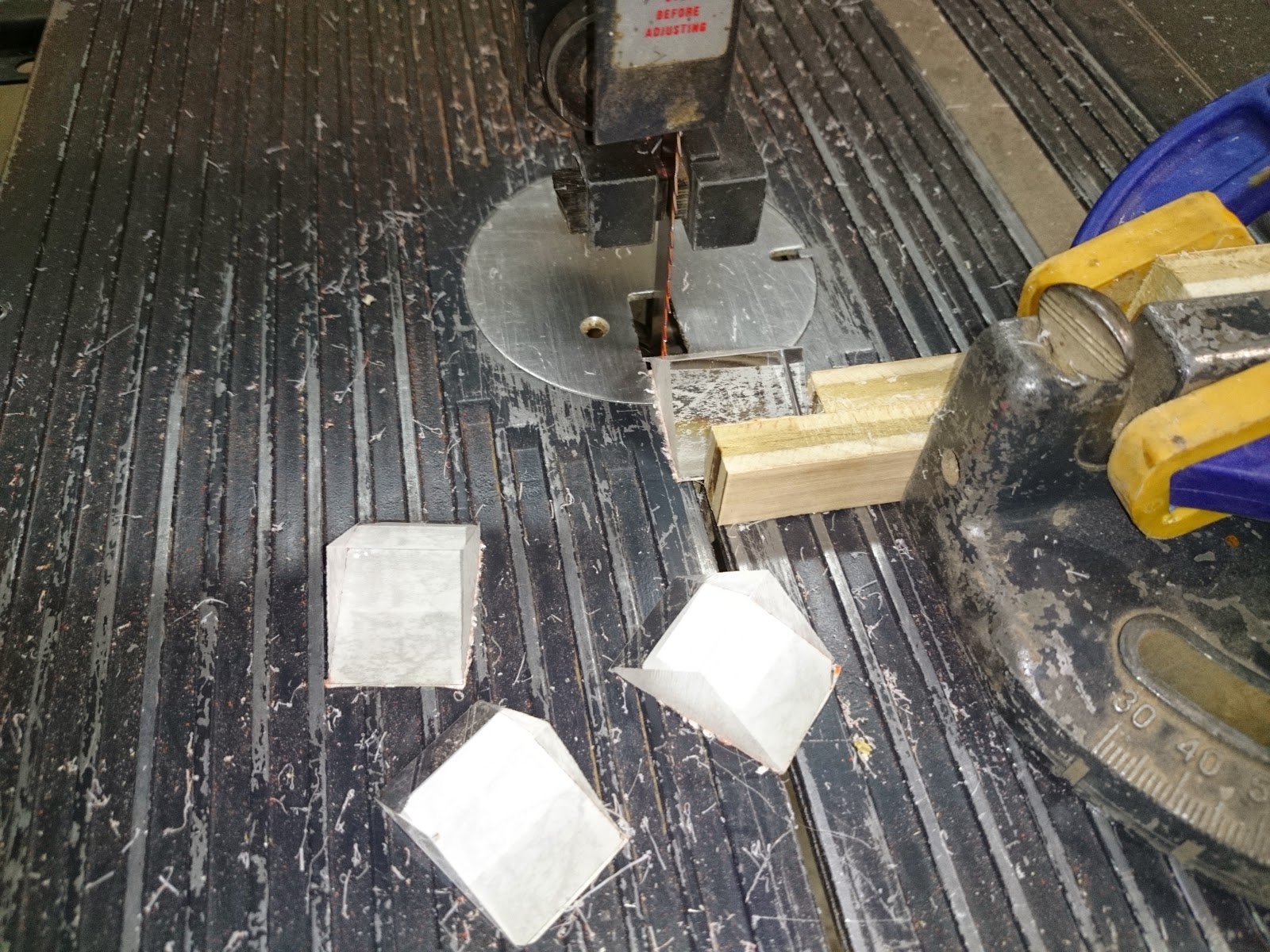 The prisms were arranged on a sticker applied to a piece of clear acrylic sheet. The acrylic did not need to be clear but it was freely available as scrap. The outlined shape was cut out by scoring on each side of the plastic and snapping it by hand. 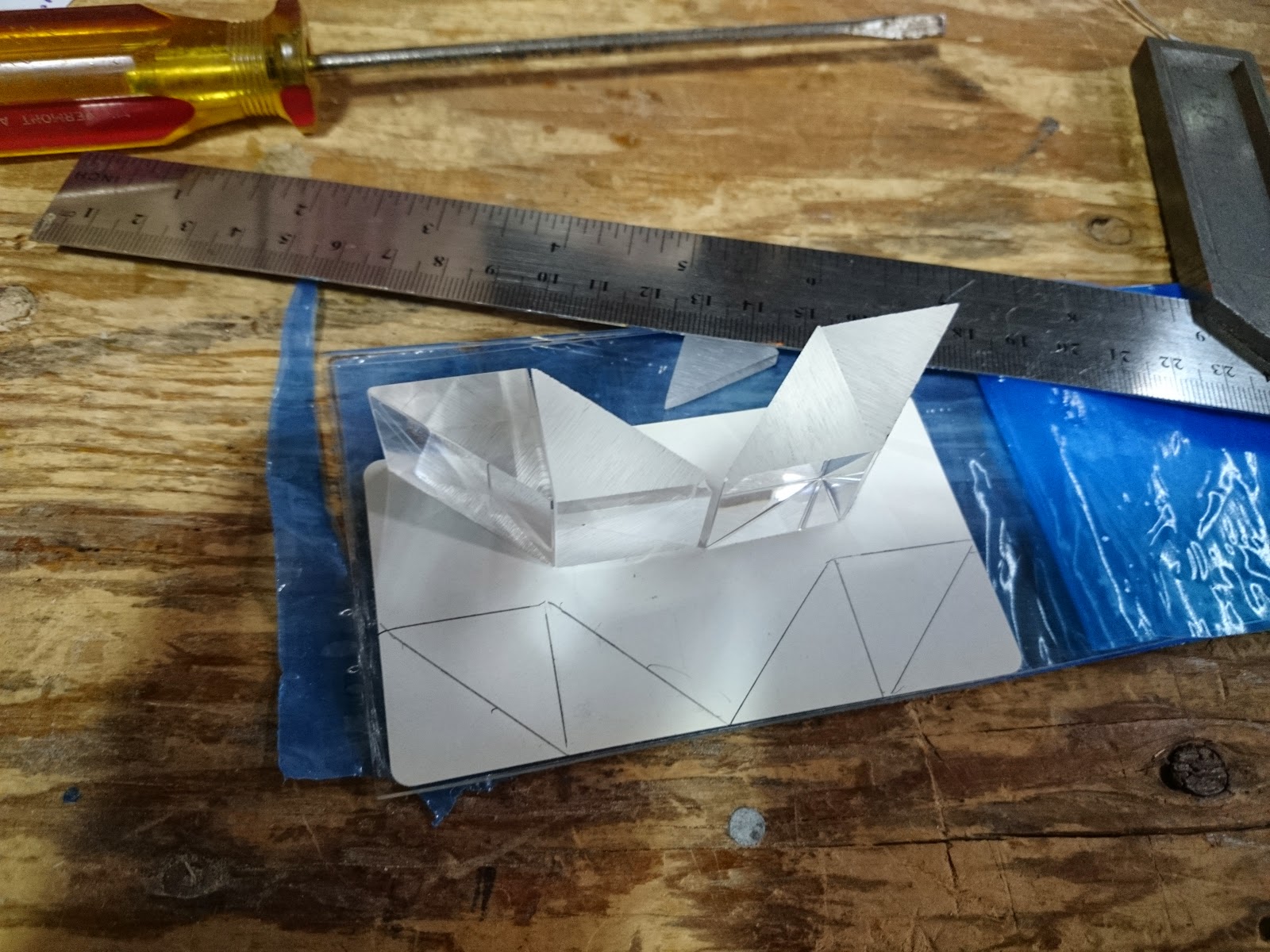 Arrangement of prisms and sketch on sticker 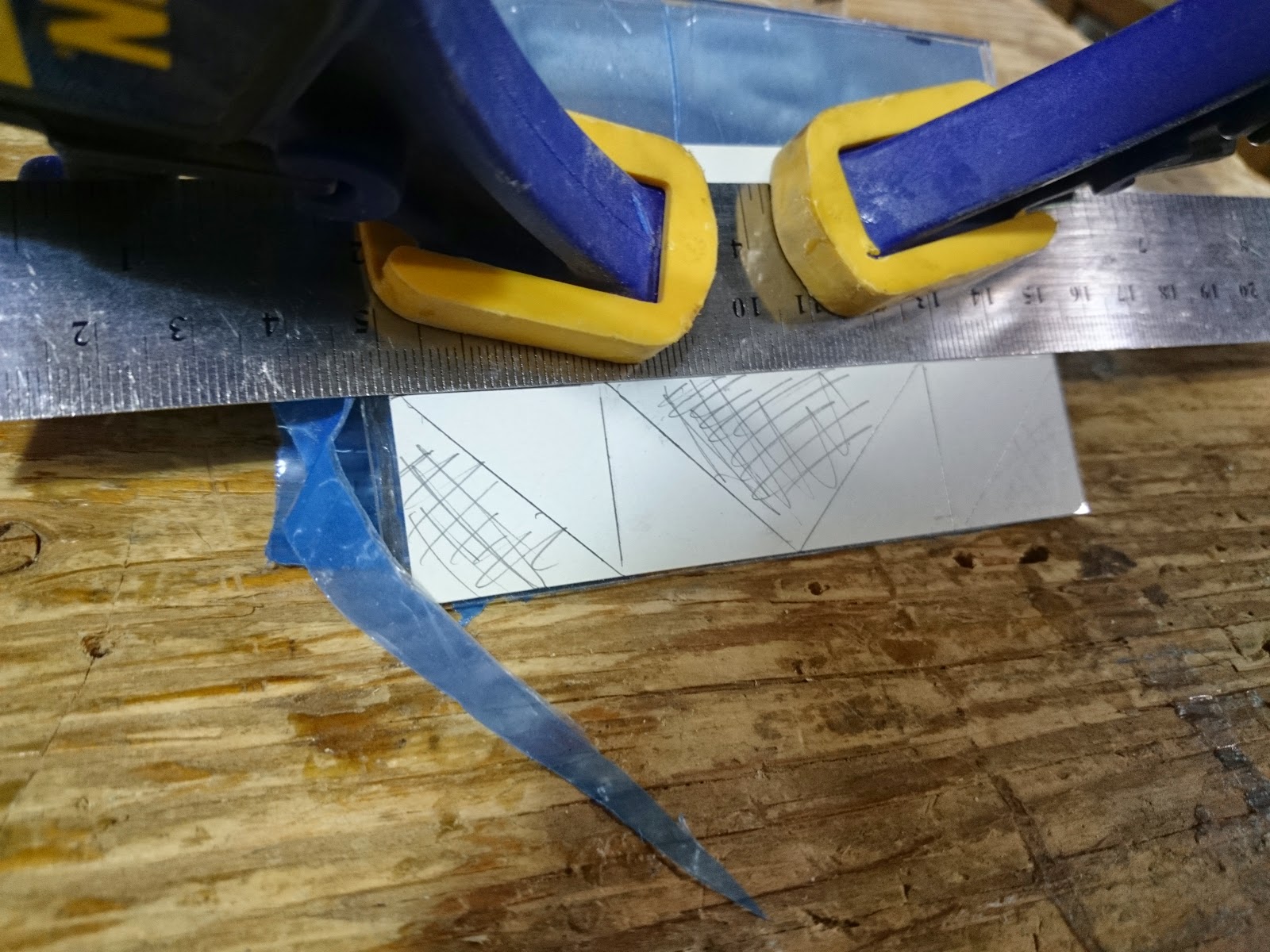 Scoring the plastic with a steel rule and a razor knife 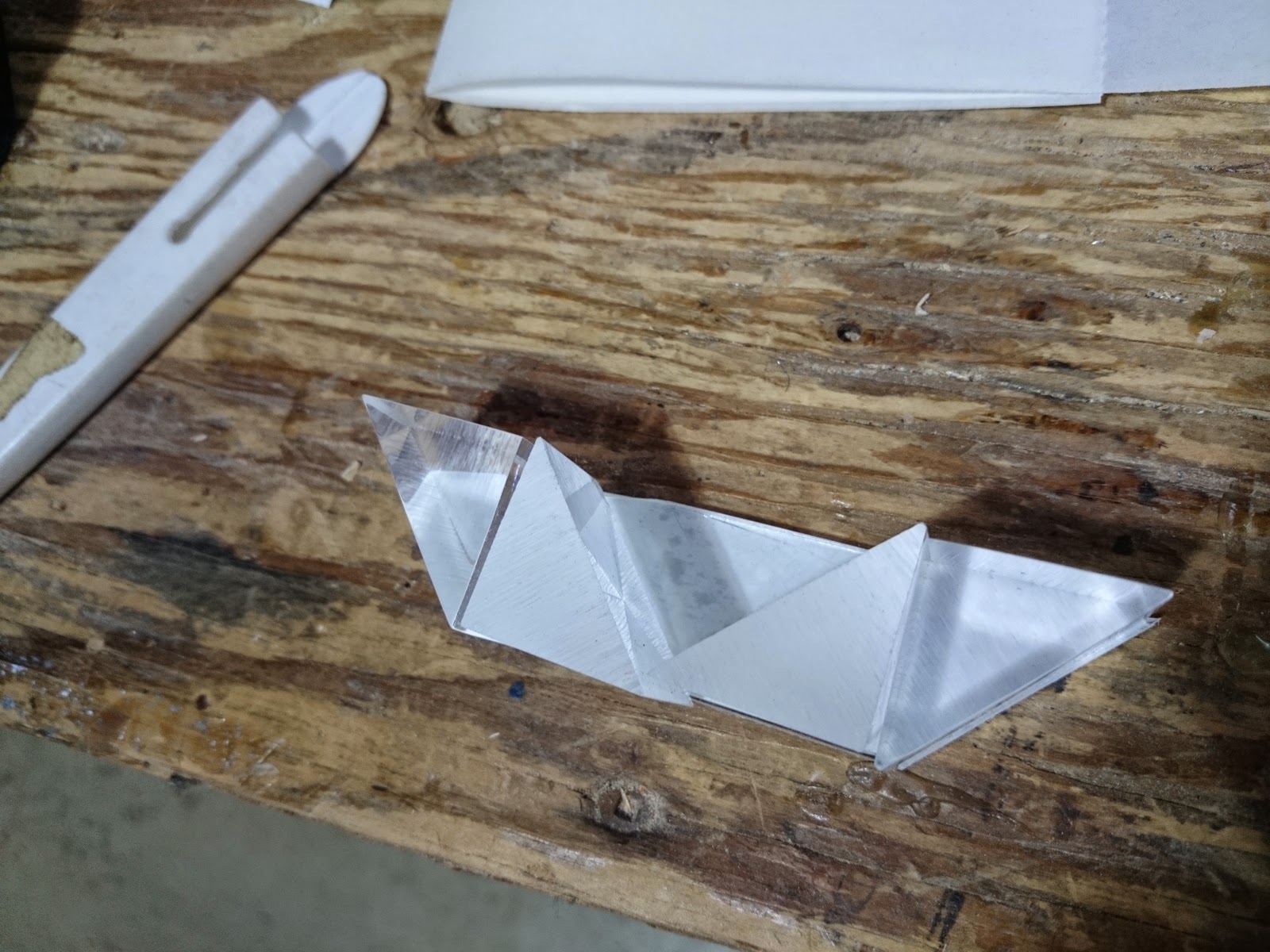 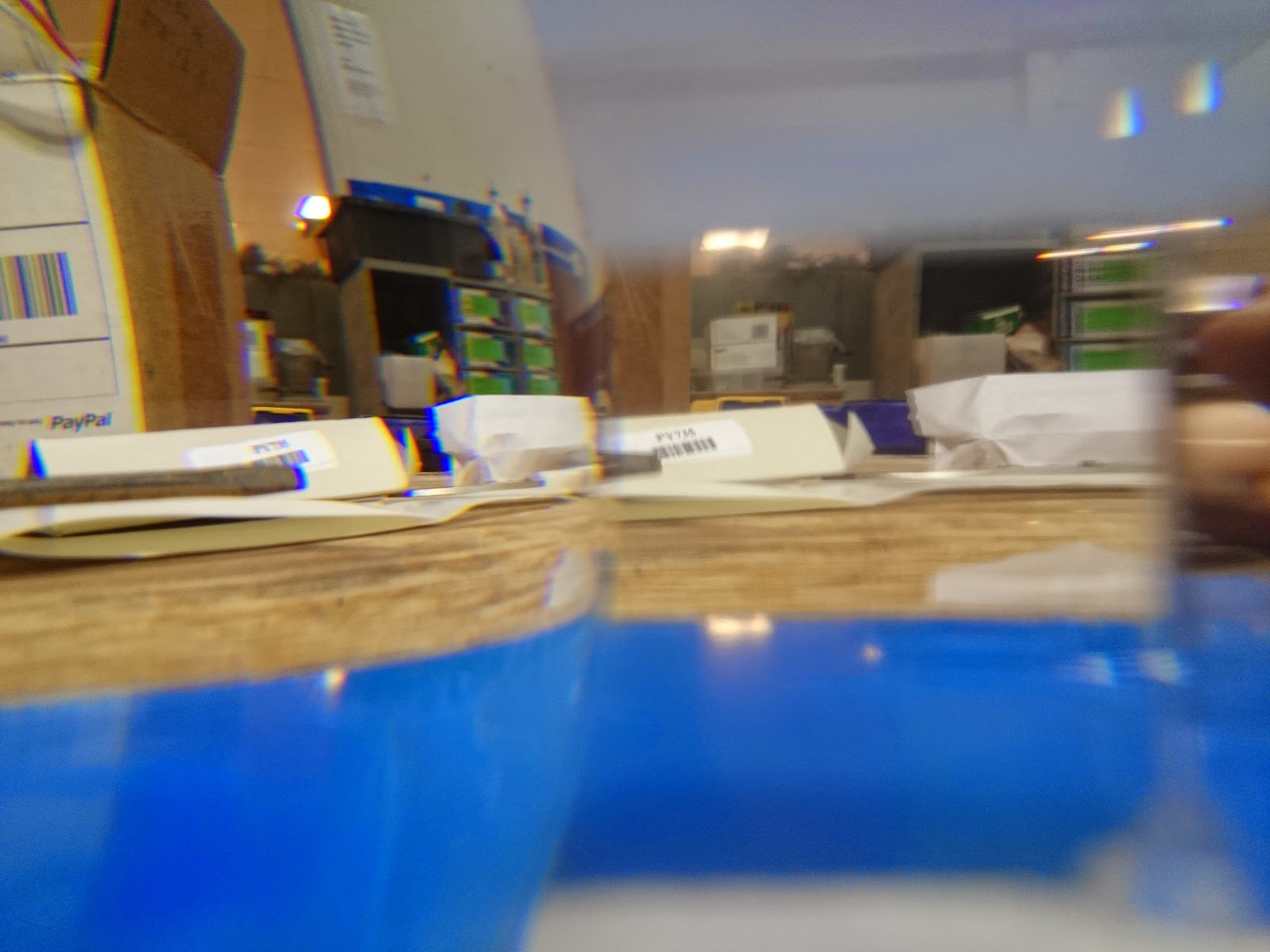 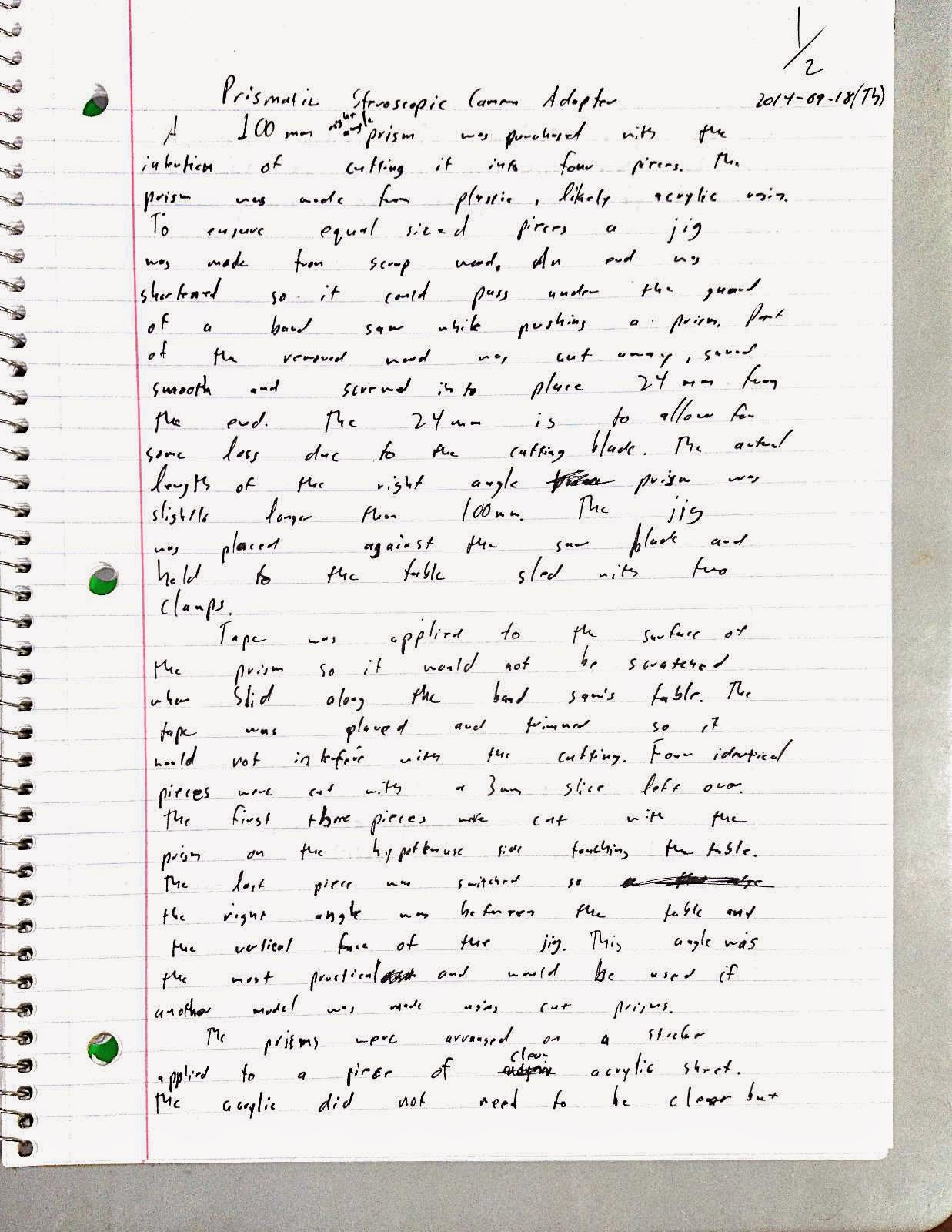 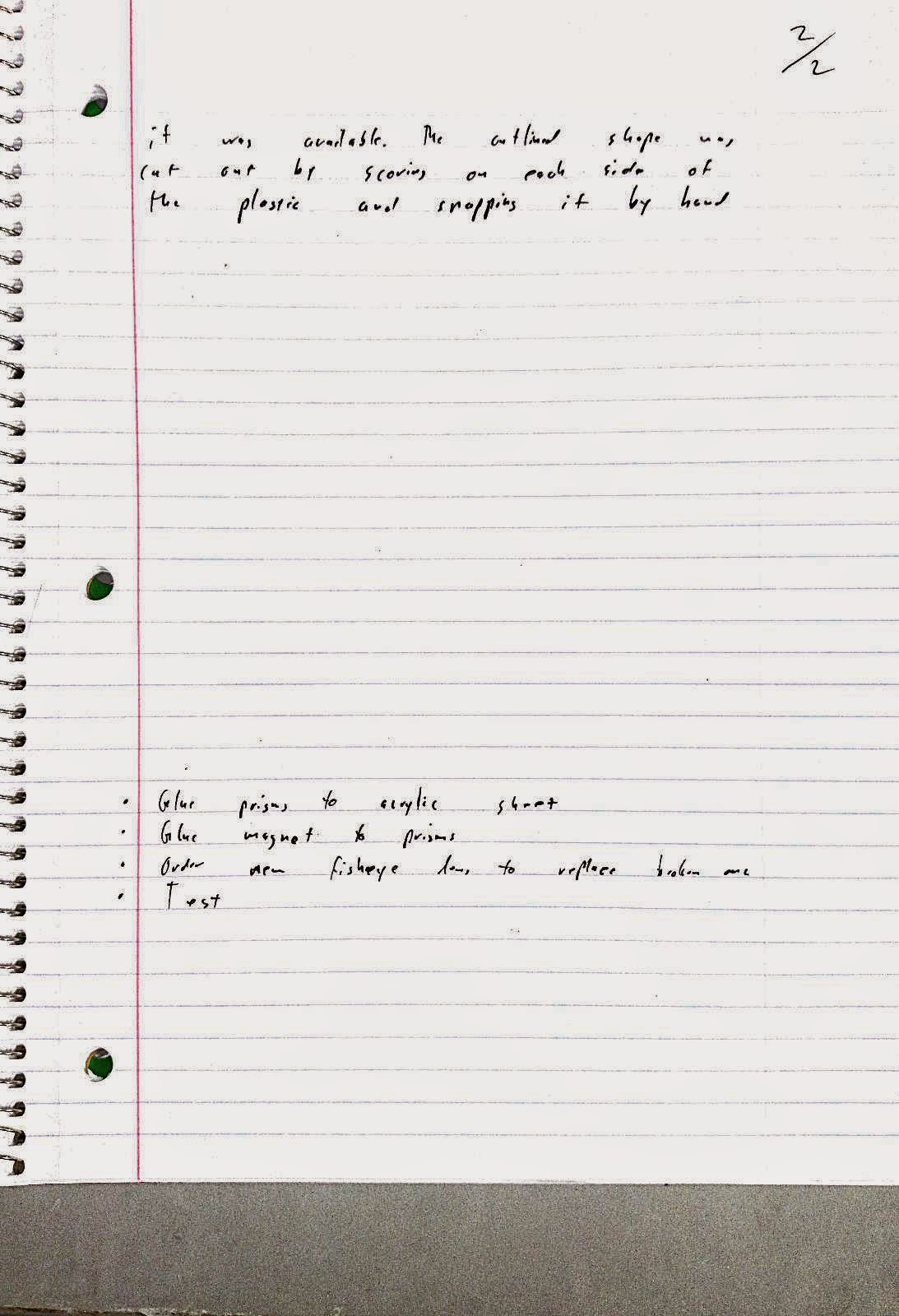