April 25, 2014
This is the view from my bedroom window this morning.

It is high enough resolution that you could use it as your computer's desktop.  (4429x1444)

Before going to the hack space a list was made to keep on track.  All items on the list were completed plus another task which should have been on the list.

The first task was to trim the tips off the metal platen triangle.  The amount to trim was measured by holding the extruded u-nuts to the holes and drawing a line on the metal.  The metal was cut using a metal cutting shear.  It happen to be a stand-mounted unit.  A saw would have worked but the shear was fast.  5/16-18 u-nuts were purchased earlier in the day.  The sharp corners [and edges] were smoothed on a bench grinder.  The u-nuts were clipped in place to complete the platen.  The threaded segment of the u-nut was on the same side that will be printed on.  The purpose is that the u-nuts provide strong staying power but only in one direction.  The will allow the machine to push the platen down.  It may have to be swapped to provide force which resists the pressure of the glue gun.  The idea is that the machine may need considerable force to dislodge the printed media from the pie tin while printing. 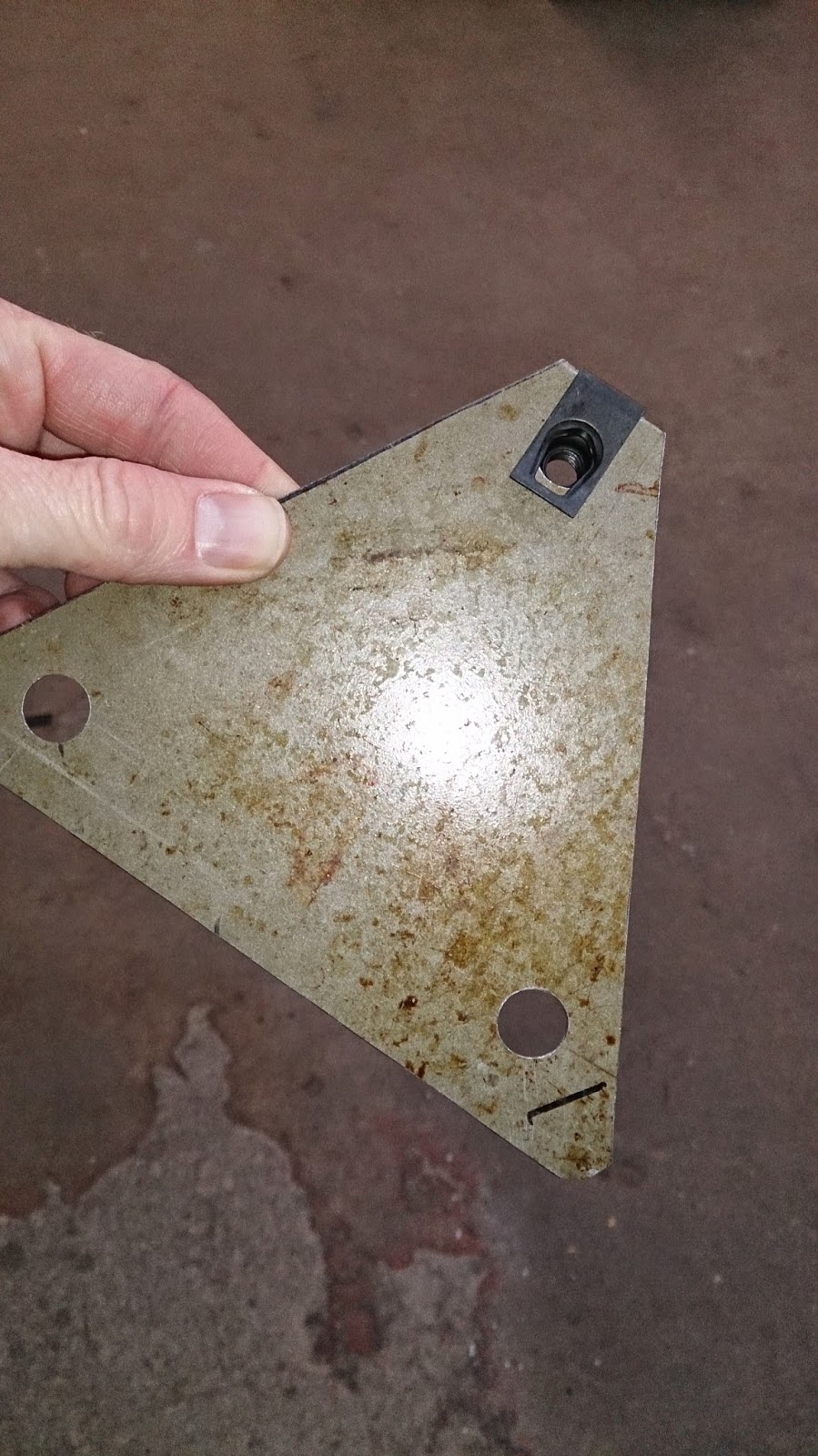 One trimmed corner and a nut 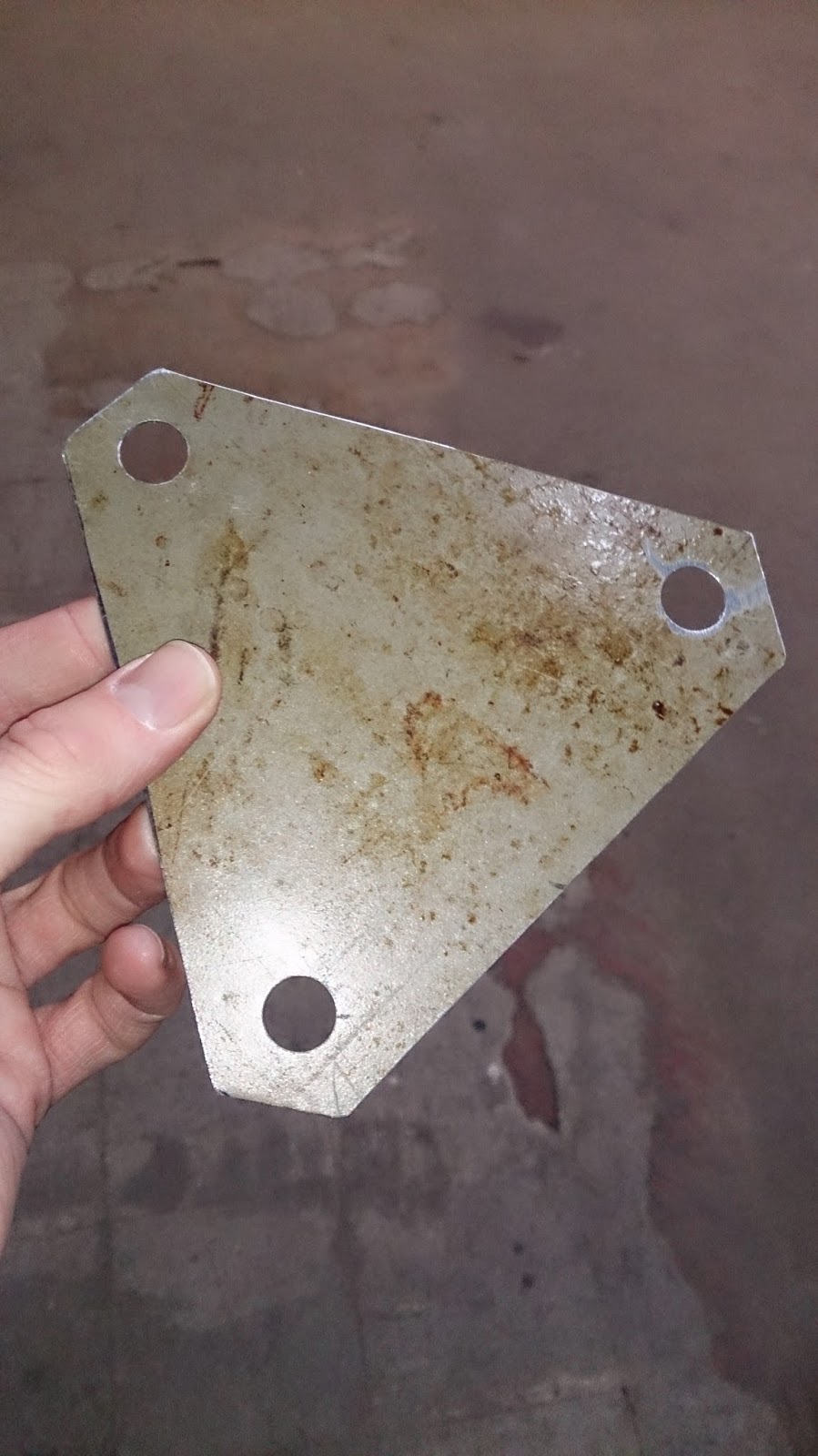 All corners trimmed and sanded 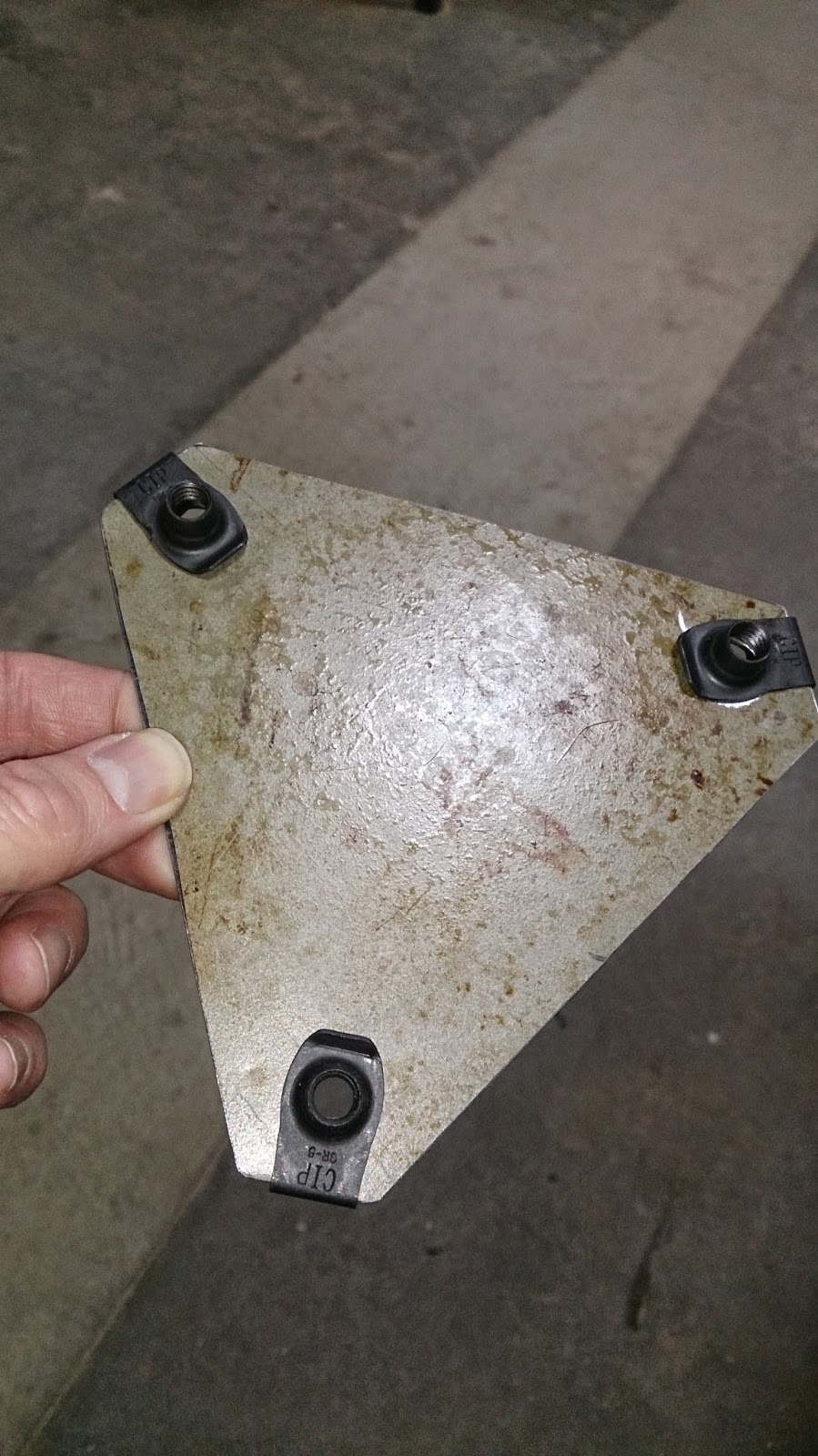 The next task, which wasn’t on the list when going to the hack space, was to widen the holes in the pie tin.  A step bit was used to widen the holes to 5/8”.  The holes must be drilled from the bearing side of the pie tin so the inevitable blow out will not affect the bearings.  Some of the blowout was sanded away with a belt sander equipped with an emery belt. 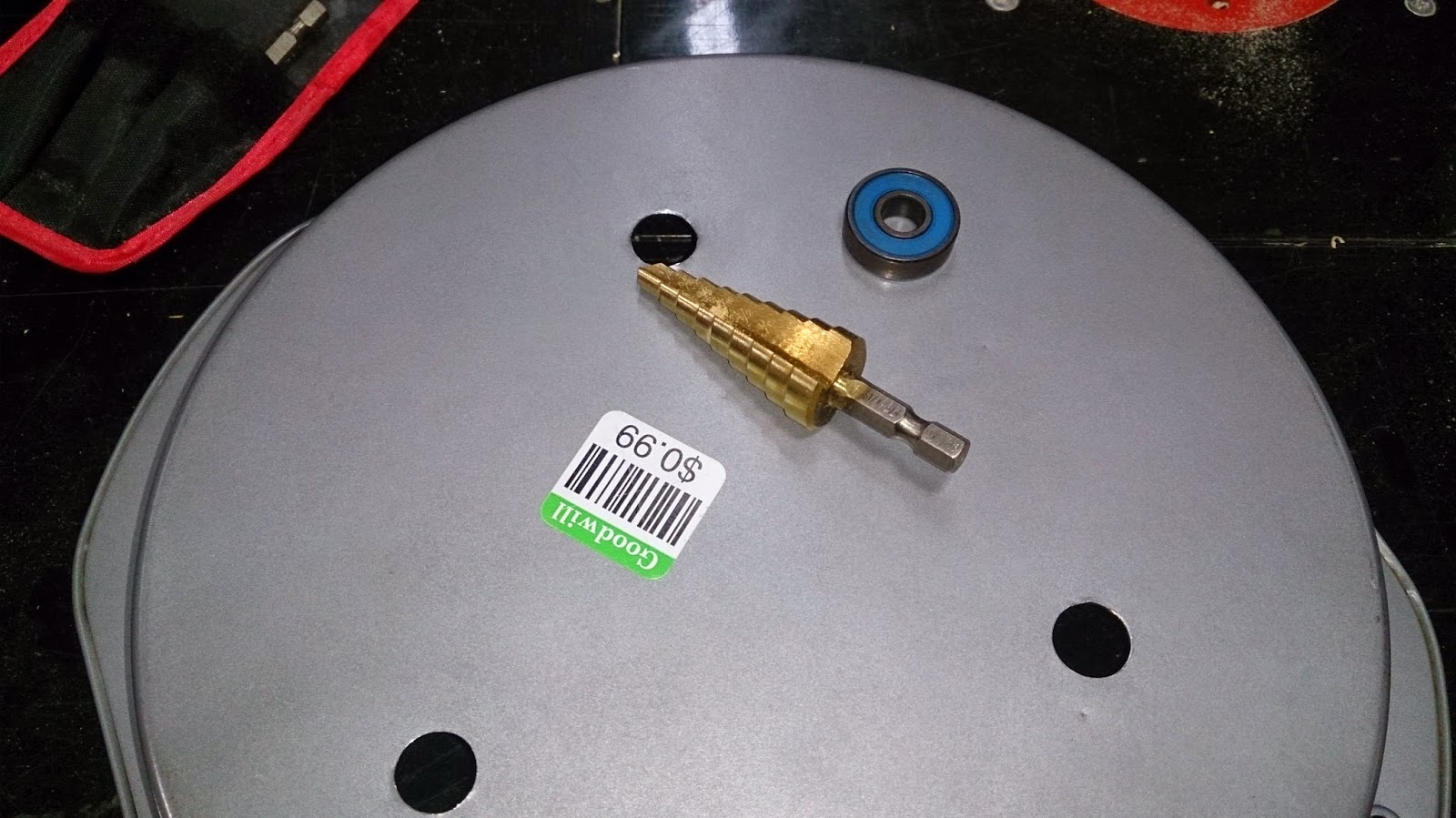 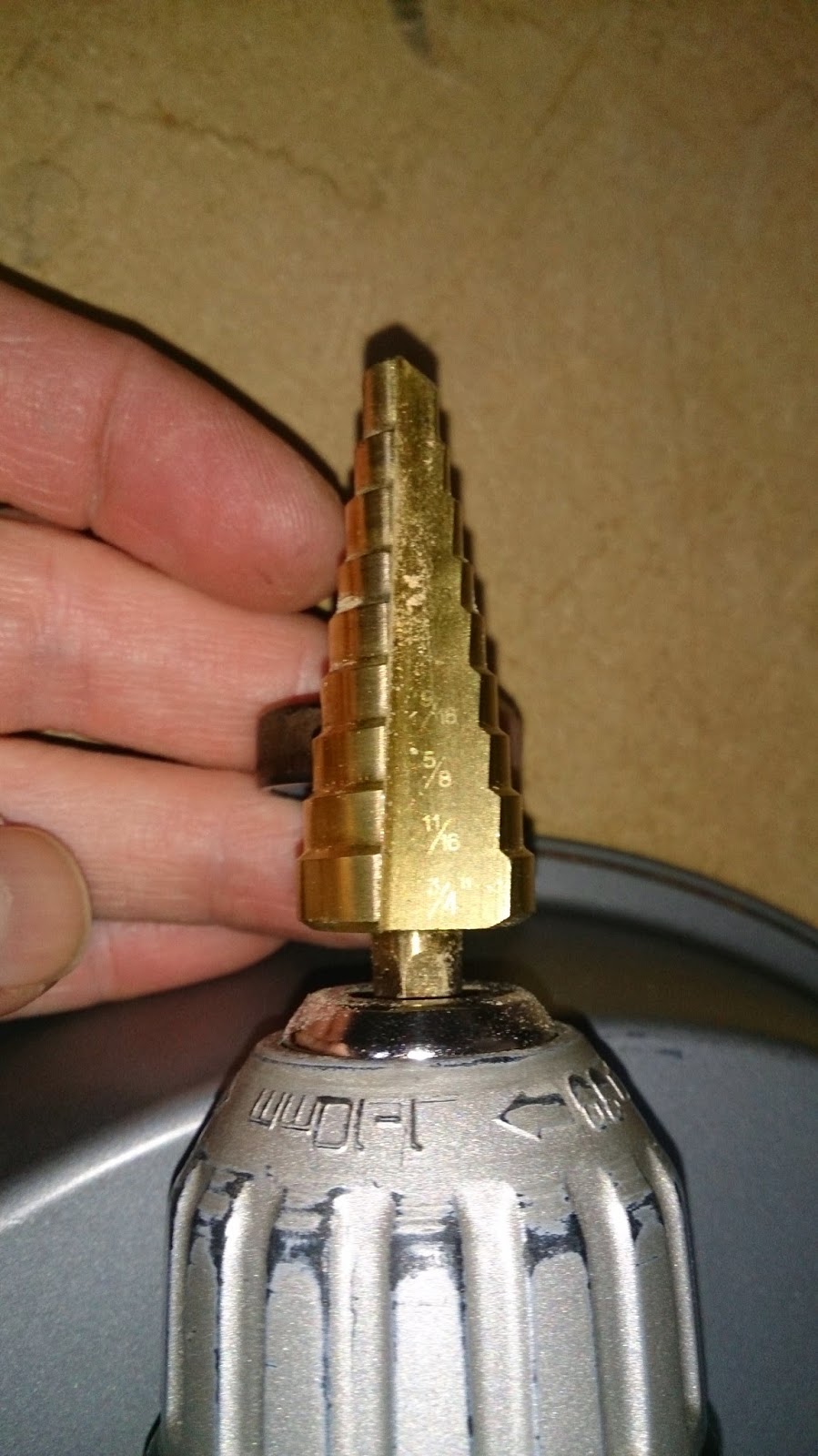 Bearing held to the 5/8" mark on the step bit 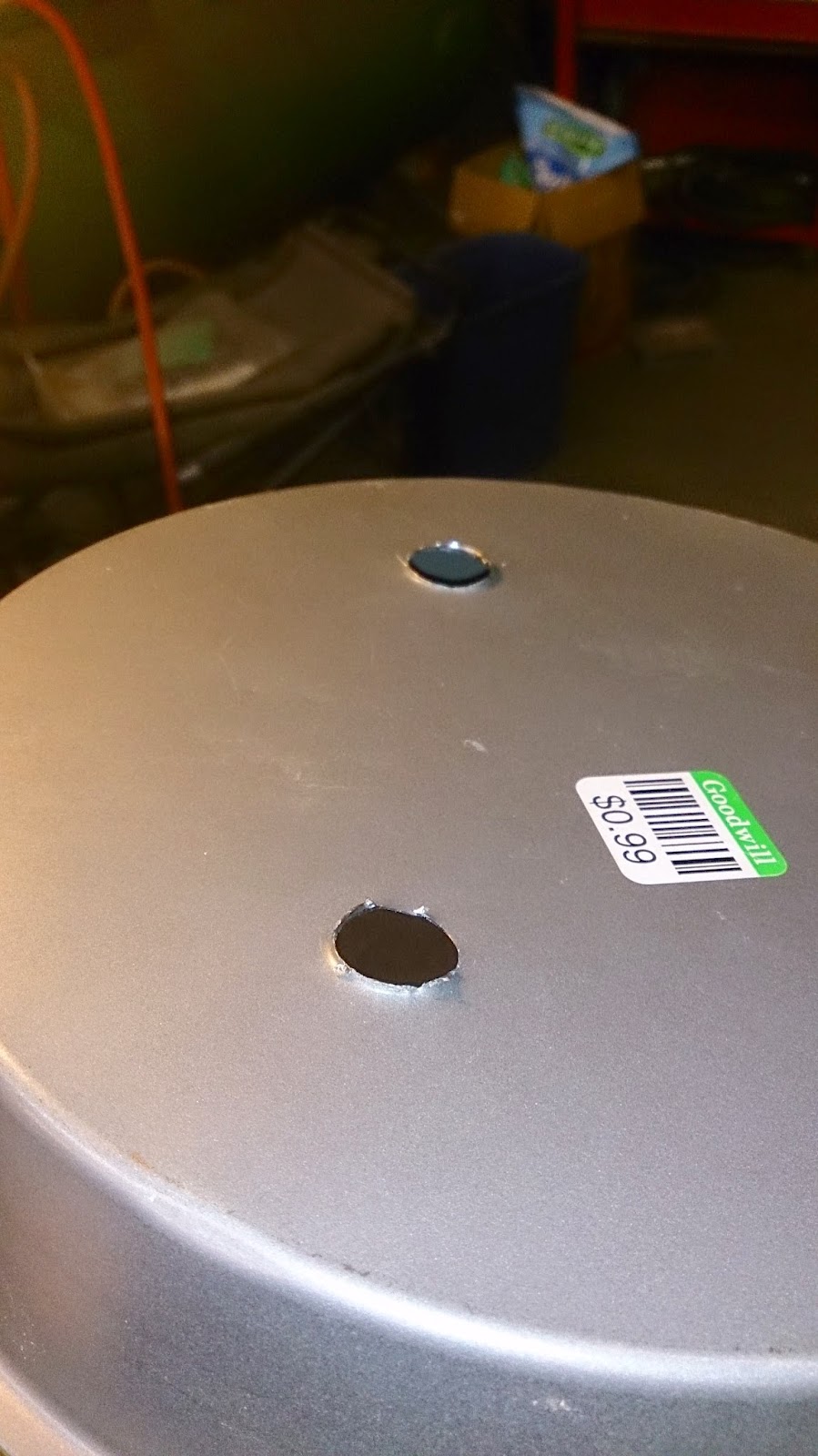 Hole blow out on the pie tin

The next task was to drill holes in the pie tin and plastic to put screws through both.  #6 aluminum screws were used since they will not be affected by water.  The plastic and pie tin were clamped in place and holes were drilled in the tips of the plastic.  More [holes] may be necessary when the glue gun is installed. 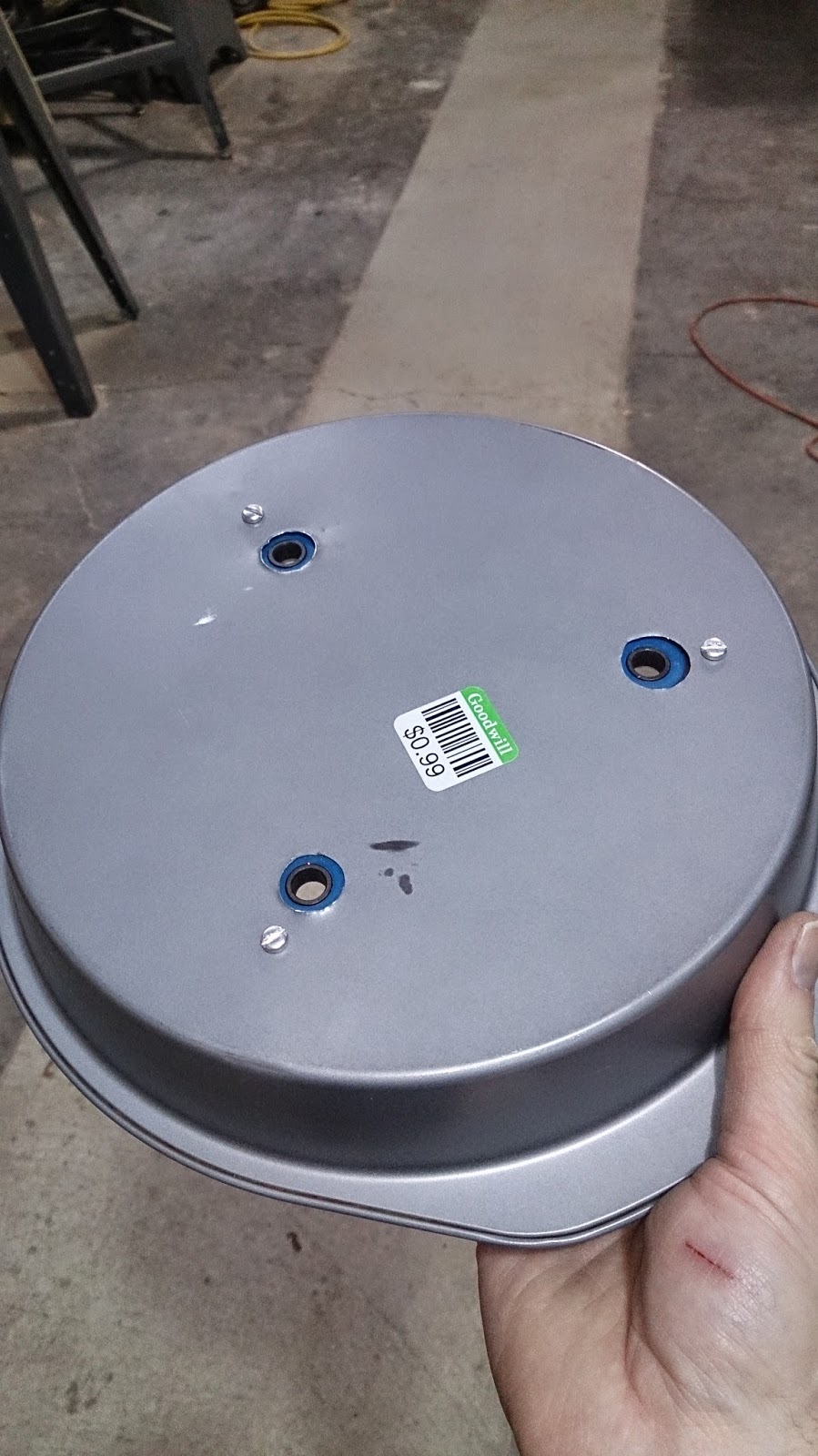 The final task was to mount the platenServo.  The first idea was to mount it upside-down so the servo sprocket would be on the level with the shaft sprockets, however the mounting hardware would not fit so it was mounted upright.  The shaft servos will have to be raised to that level and spaces will be needed.  The servo mounted with 2” long #8 bolts although shorter bolts could have worked.  The hole pattern for the servo was drawn on the pie tin and drilled with 3/16” holes.  Hardware was purchased earlier in the day. 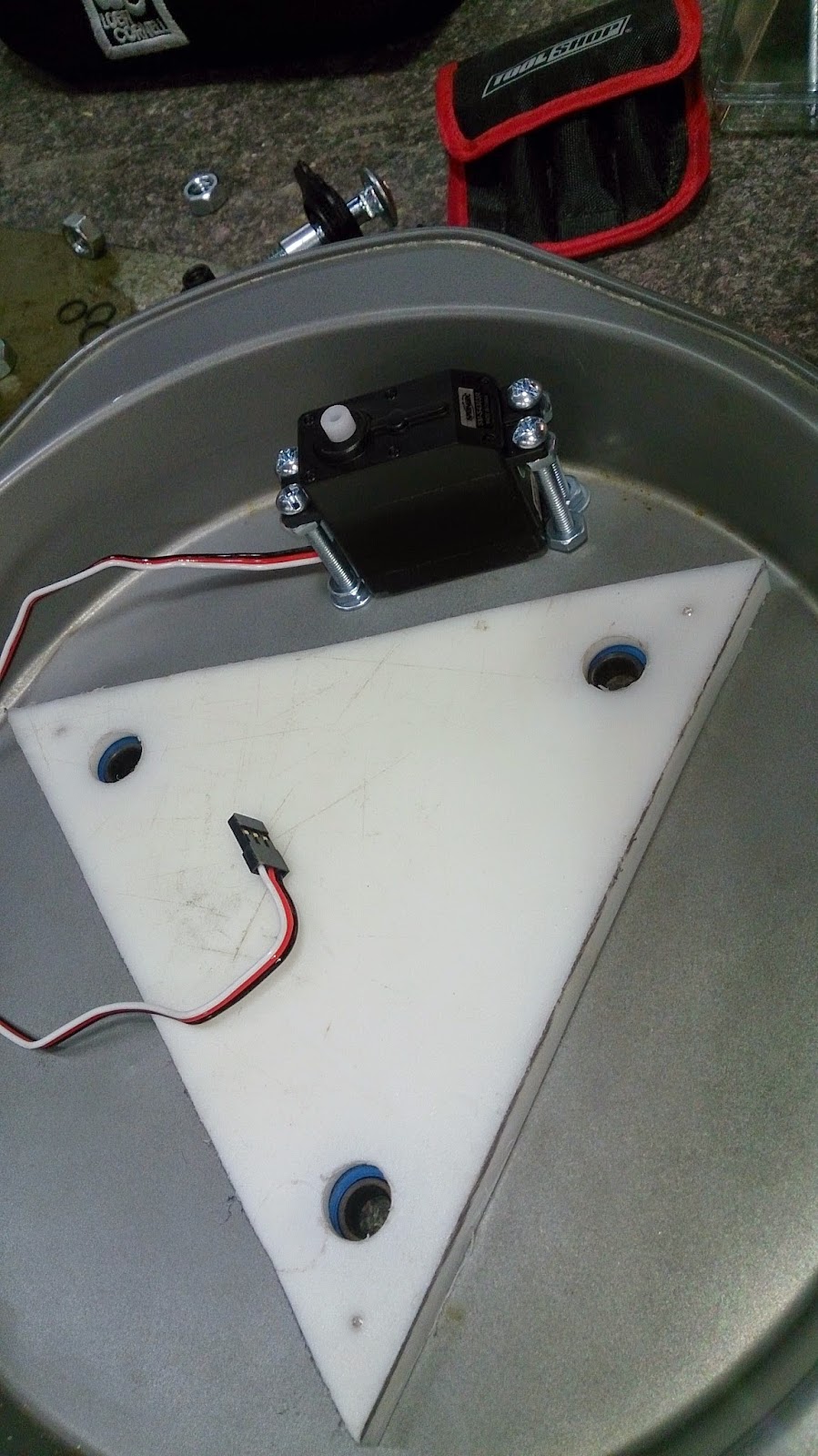 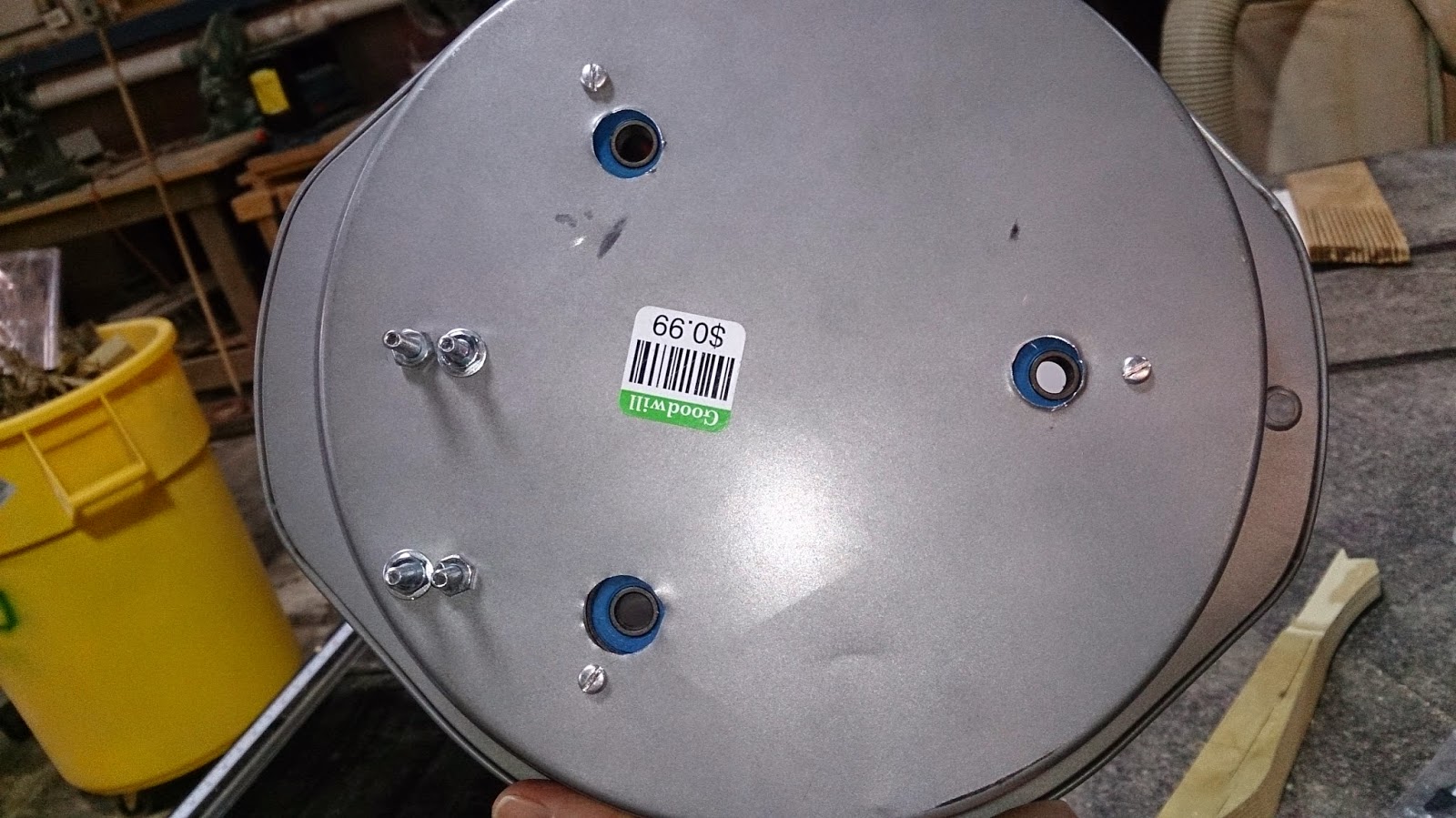 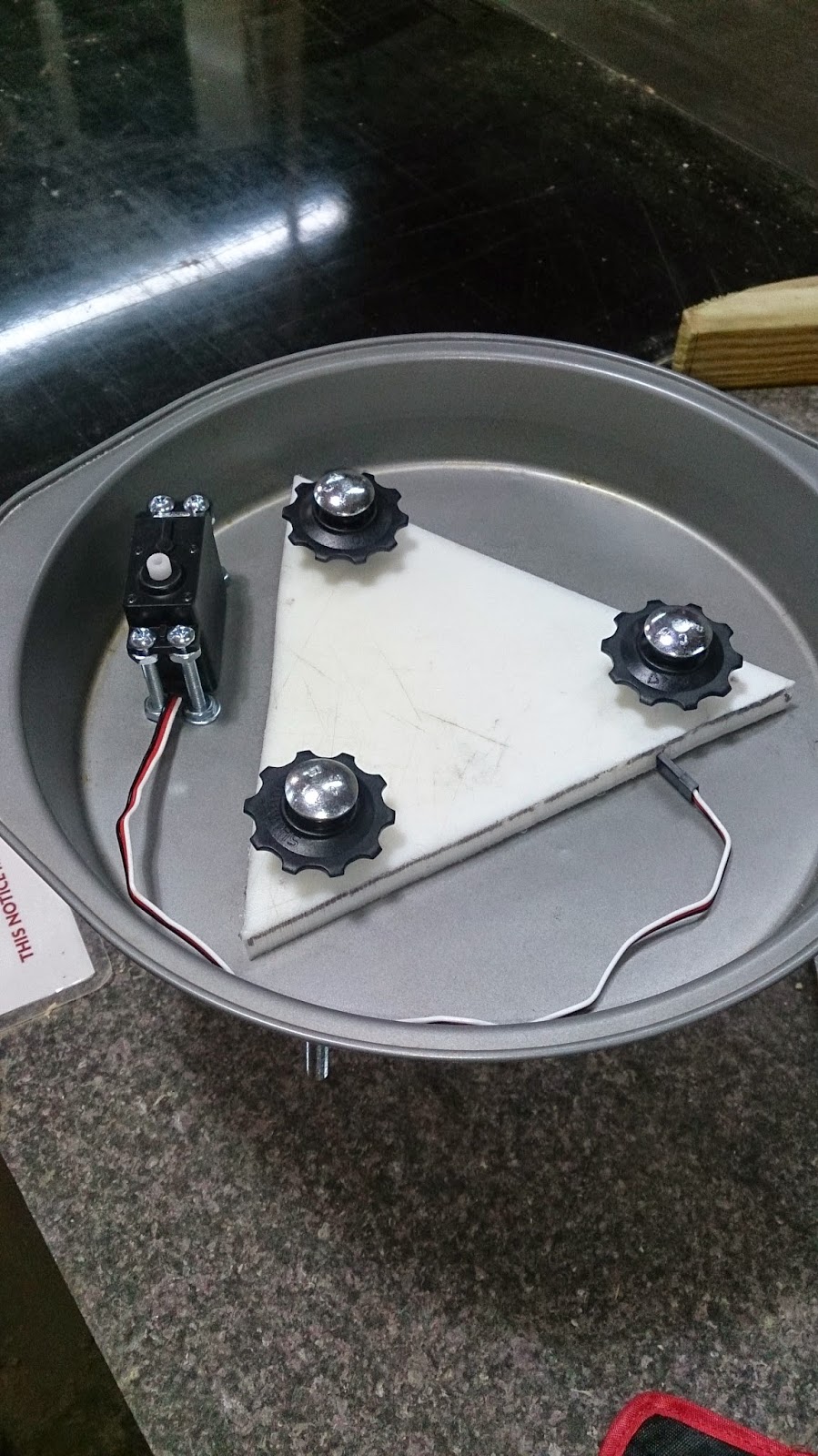 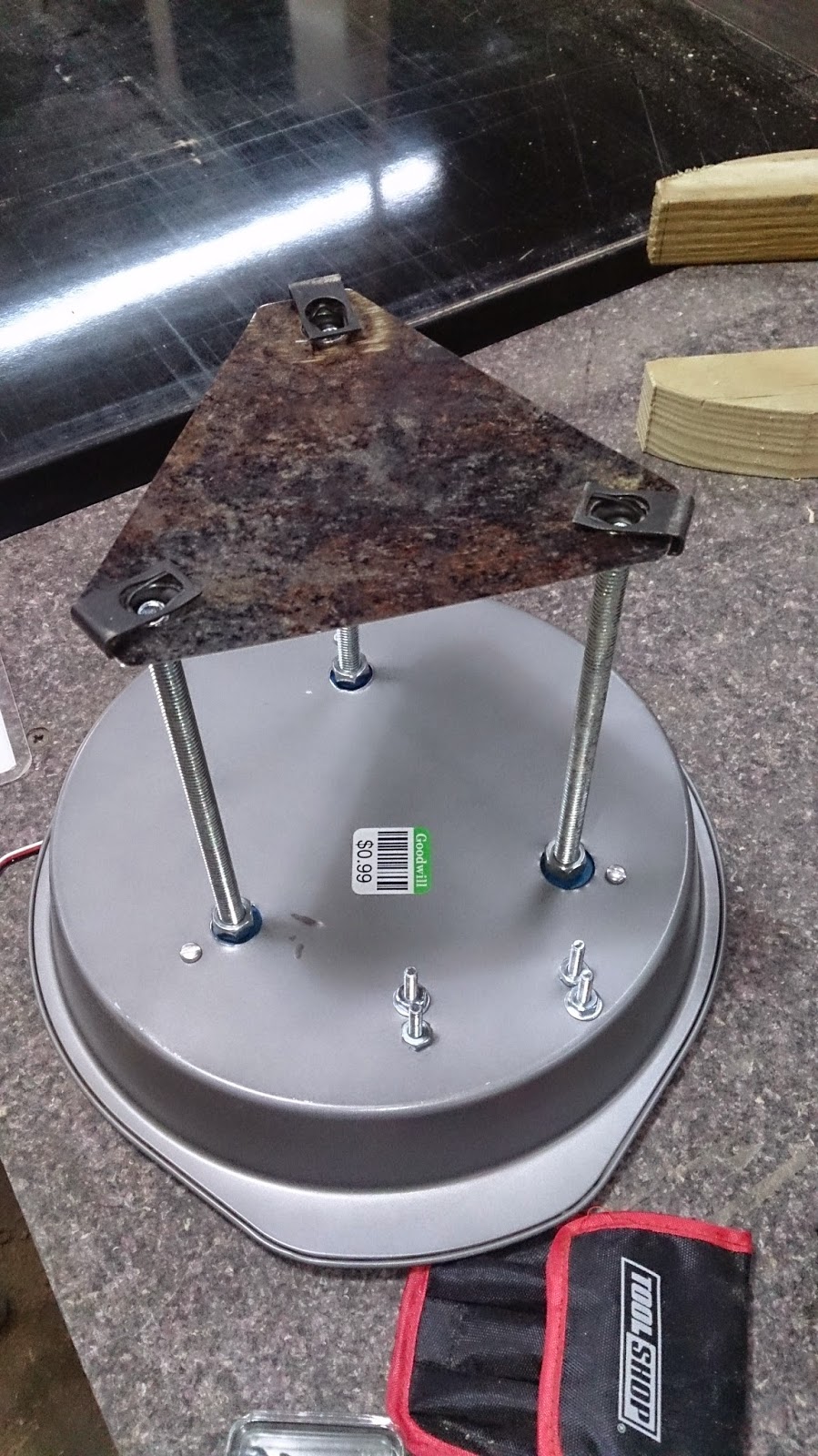 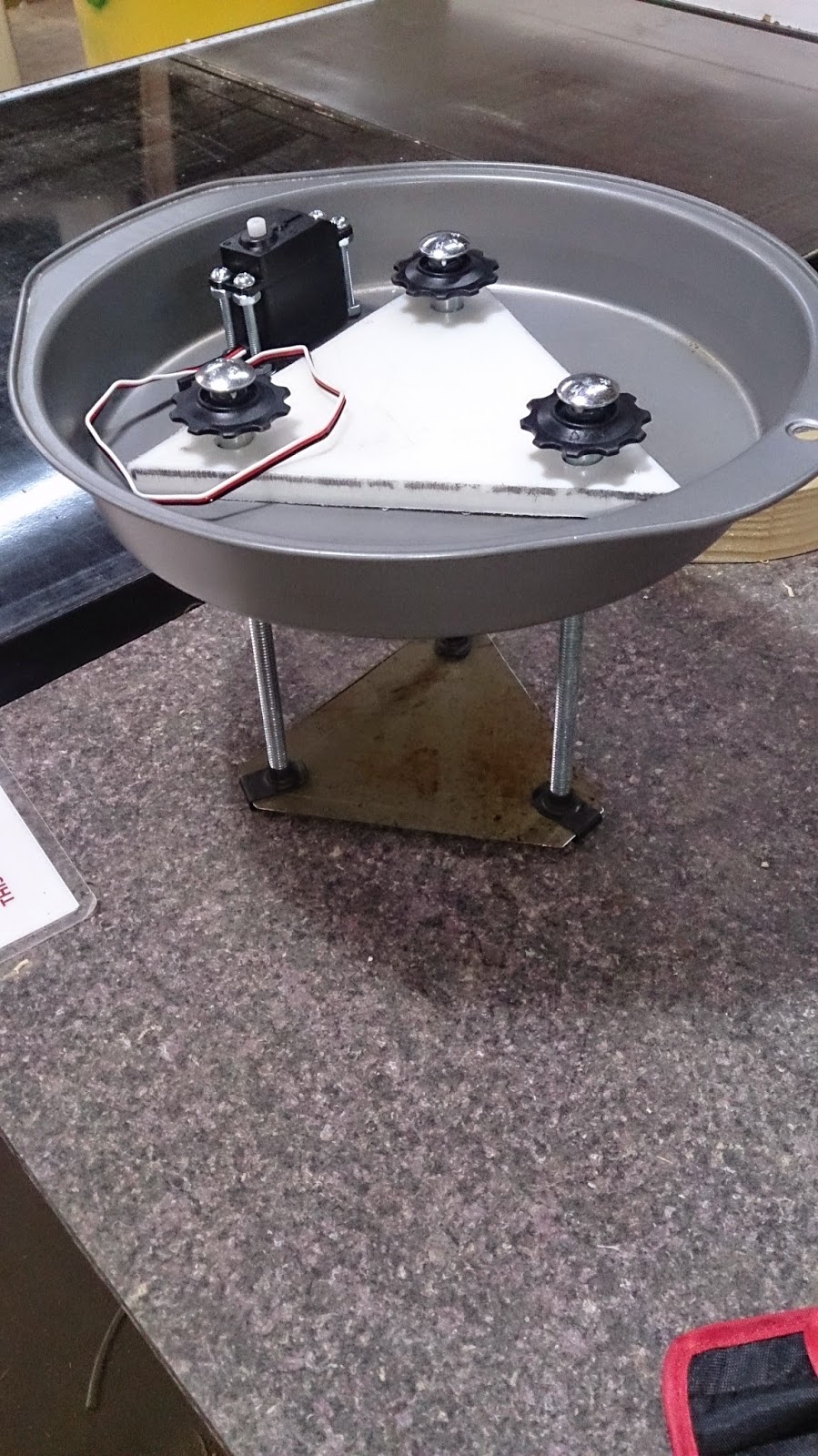 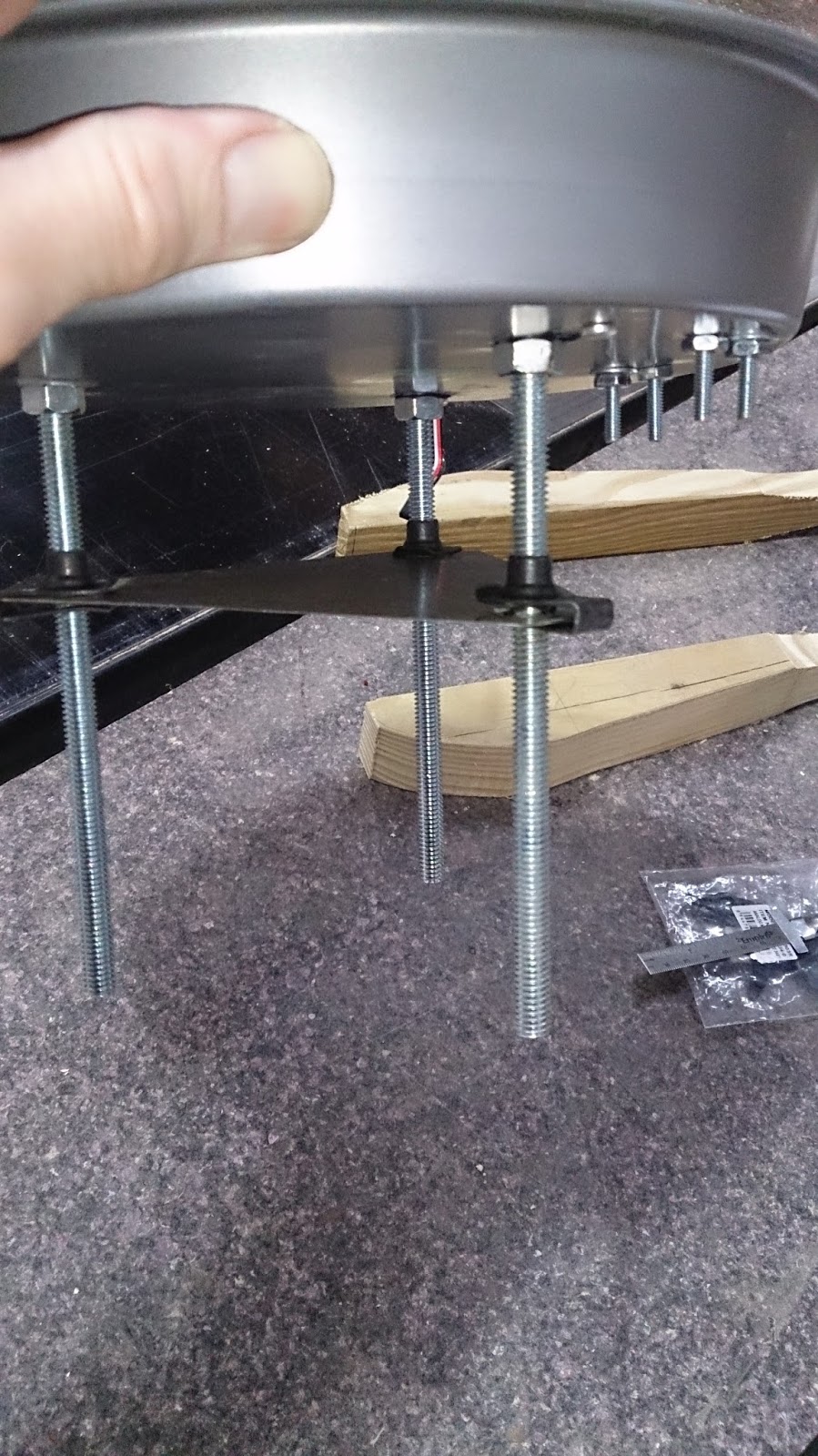 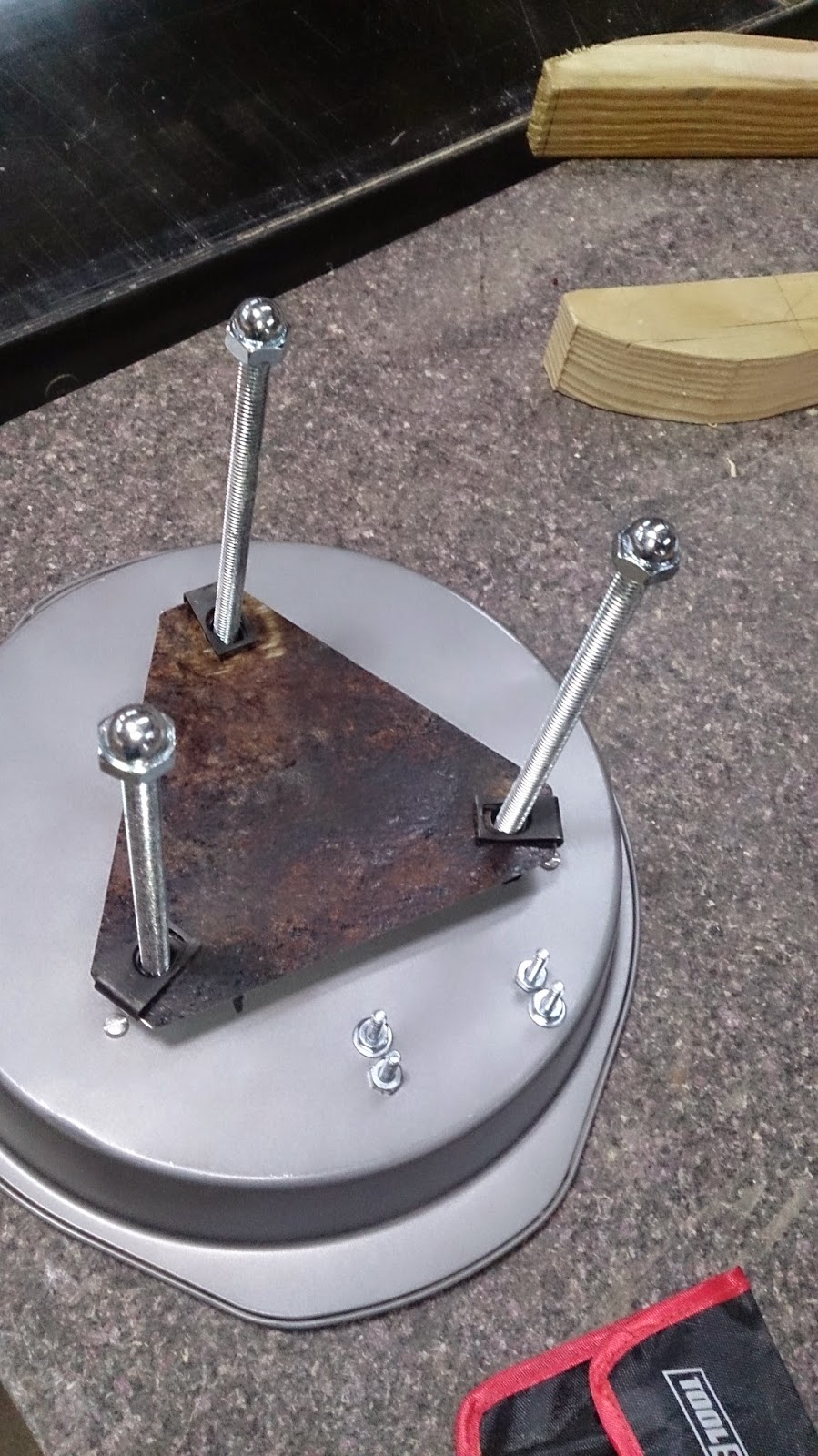 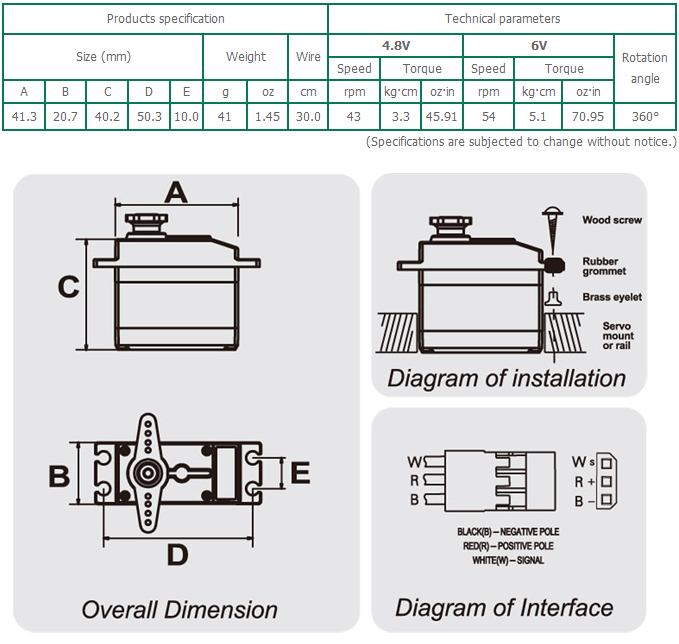 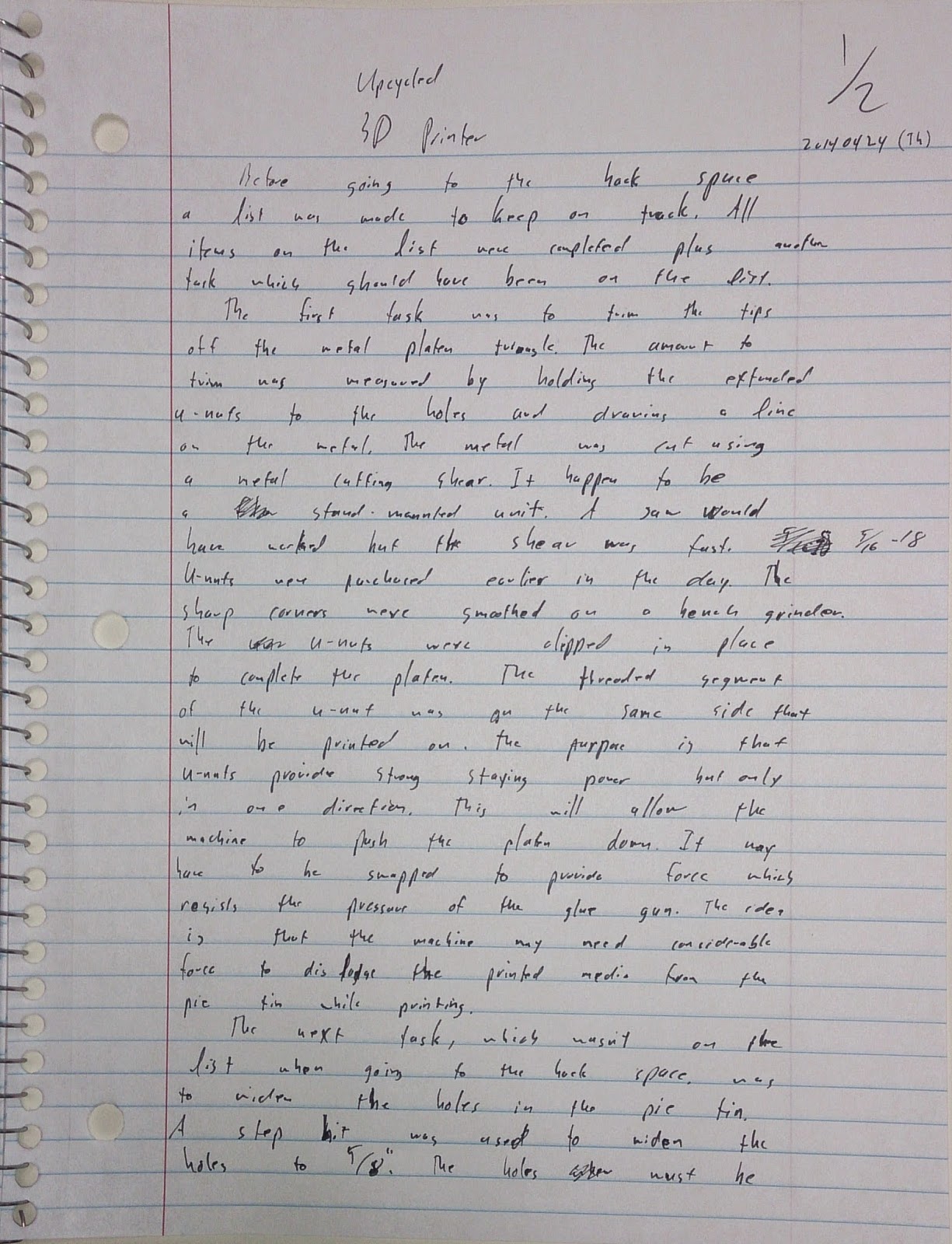 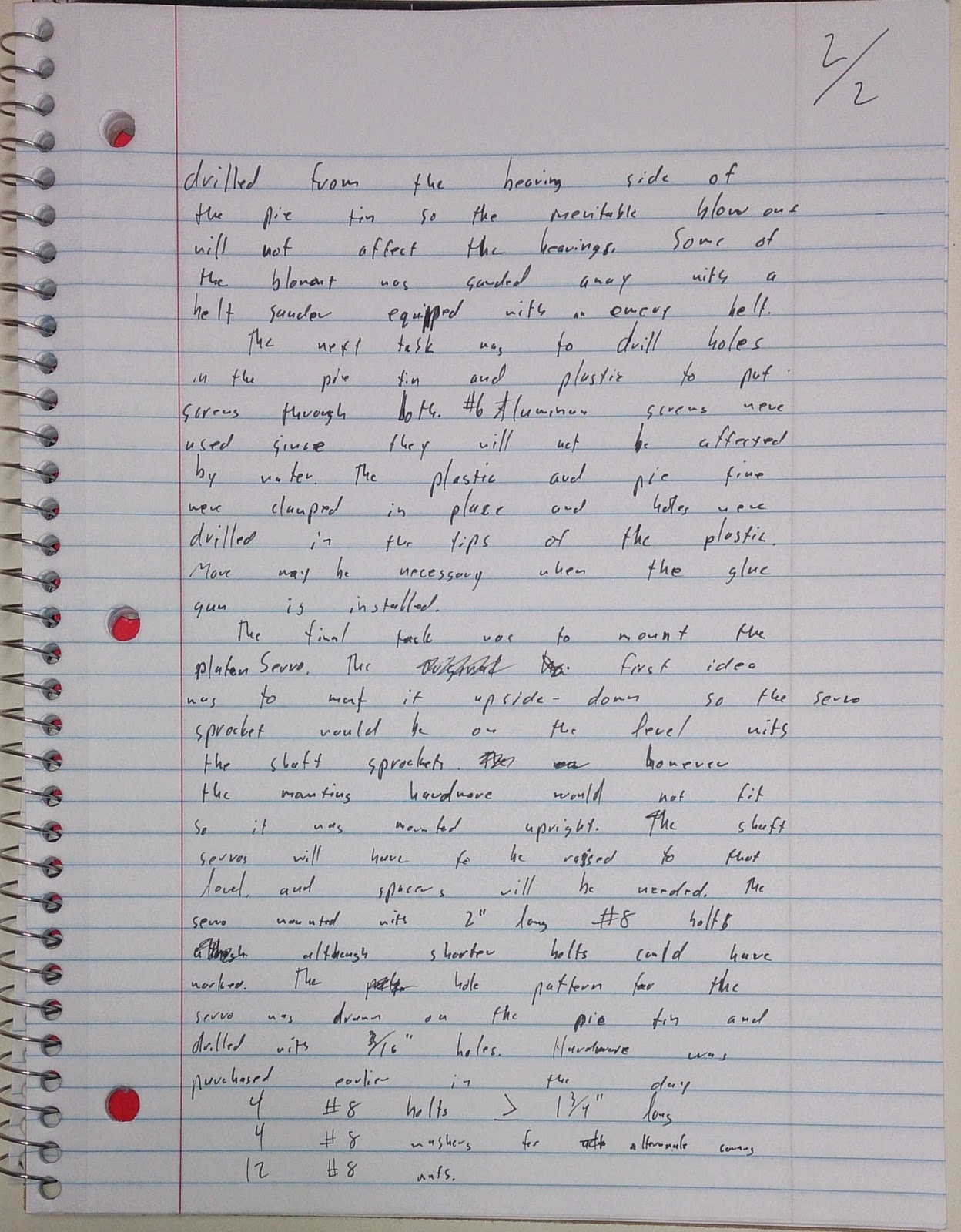