Sometimes the project I work on is decided by what I’m currently excited about.  Sometimes a project is at a really exciting stage where a lot is getting done.  Other days I feel like there are external circumstances that have to be taken into consideration like if the summer is ending and I’m working on a longboard.  Finishing a longboard in the winter is fine but I can’t ride it until spring.  Sometimes I talk with someone about a particular project and later I enact the things I talked about.  At lunch I talked with the person behind the Tennis Ball Launcher contest and showed off what I had already built.

That evening I planned to continue work on the ESPeri.Impass, as I had been for the last several days, so I bought parts at a hardware store and was pretty excited about improving the new design.  However, when I got to the hack space I realized that I had forgotten the Impass materials at my apartment.  Everything except the parts I just bought was sitting on the table next to my bed.  So, suffice to say, I worked on the Tennis Ball Launcher because those parts were handy.

I guess there’s an advantage to a messy car, I would have been out of luck if that project wasn’t close.

2” PVC was cut to obtain two pieces 30” long.  It was cut on a radial arm saw.  The goal was to make larger diameter replacements for the 1 ½” PVC already cut and drilled for this project.  Marks were made 1” from the end to be drilled to 5/16” for the carriage bolts which hold the bungee cord.  The 5/16” holes were drilled all the way through the PVC pipe.  Care was taken to keep the holes on the same plane.  One end was drilled then a bolt was inserted so an accurate ling-of-sign could be drawn at the opposite end of the pipe.  A second hole was drilled 28” away which is a longer distance than the first pipes.  This caused more tension on the bungee. 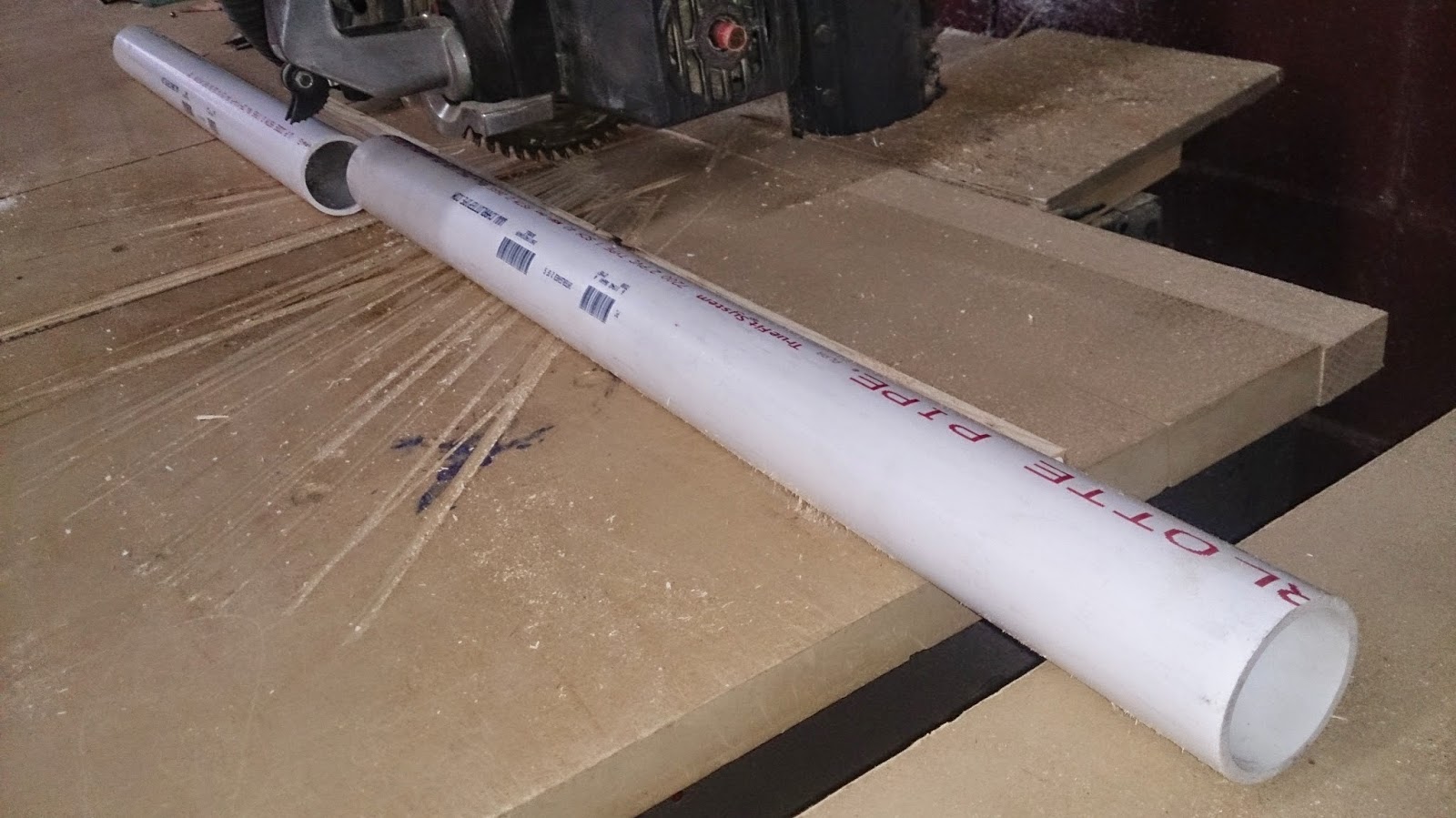 Cutting the PVC into 30" pieces 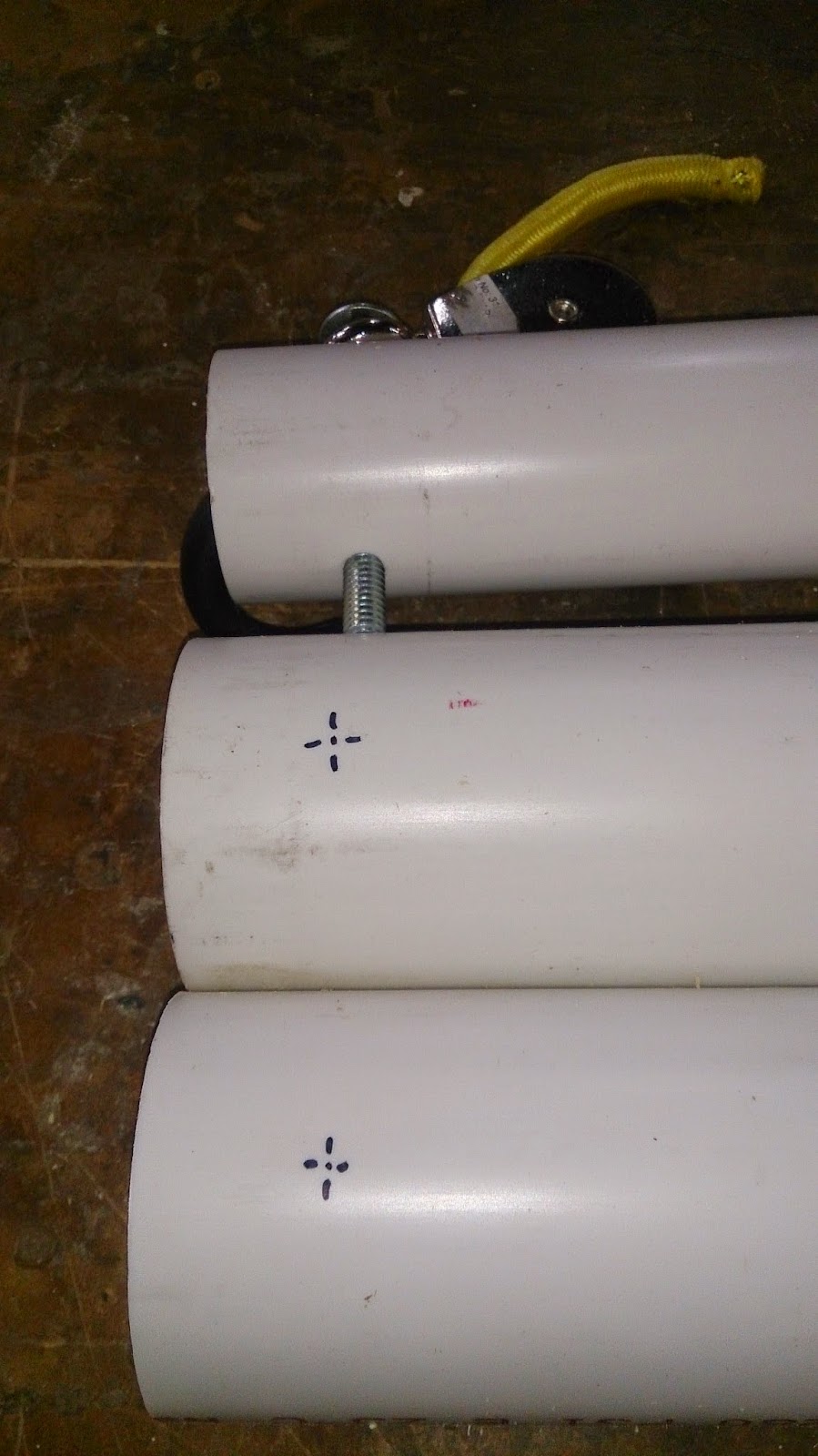 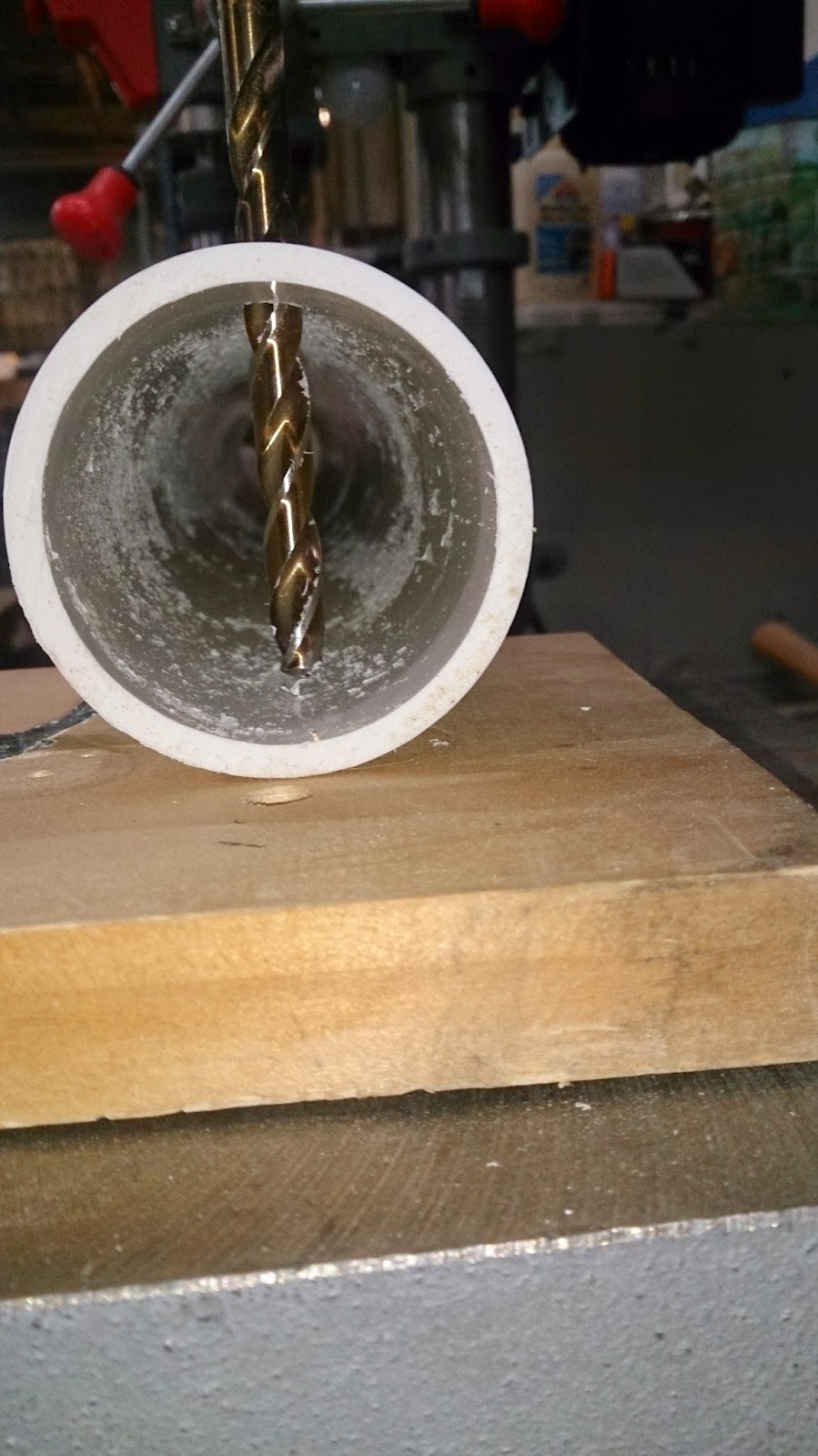 The holes are drilled all the way through the PVC pipes 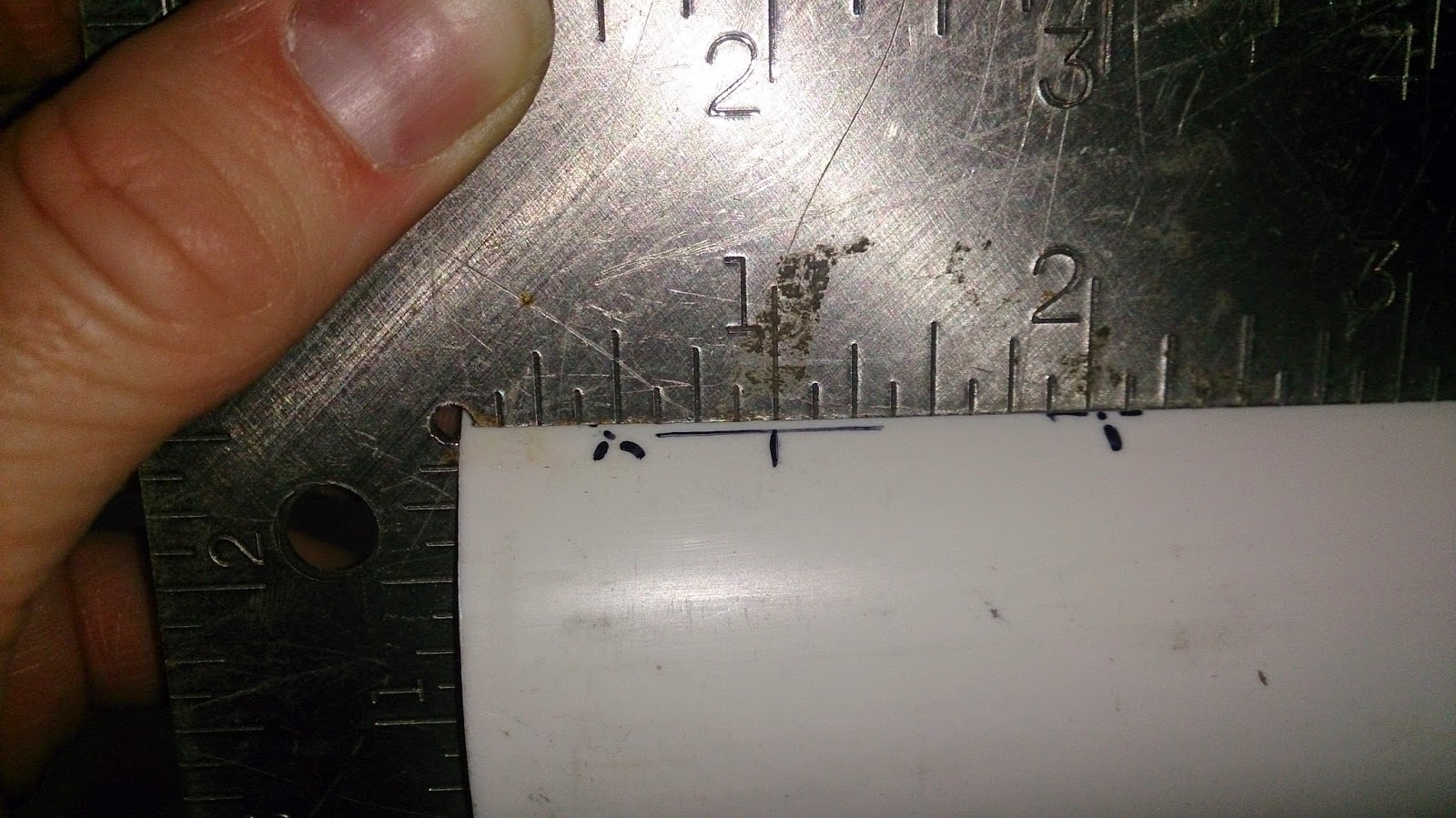 Measuring 1" from the back end

Keeping the pipes close to identical was done by inserting a long 5/16” bolt through the first holes then copying the other end ensuring the holes in both tubes were the same distance.  The second end was marked by twisting a bolt through the first pipe, which had all the bolt holes drilled, and pencil marking on the second pipe. 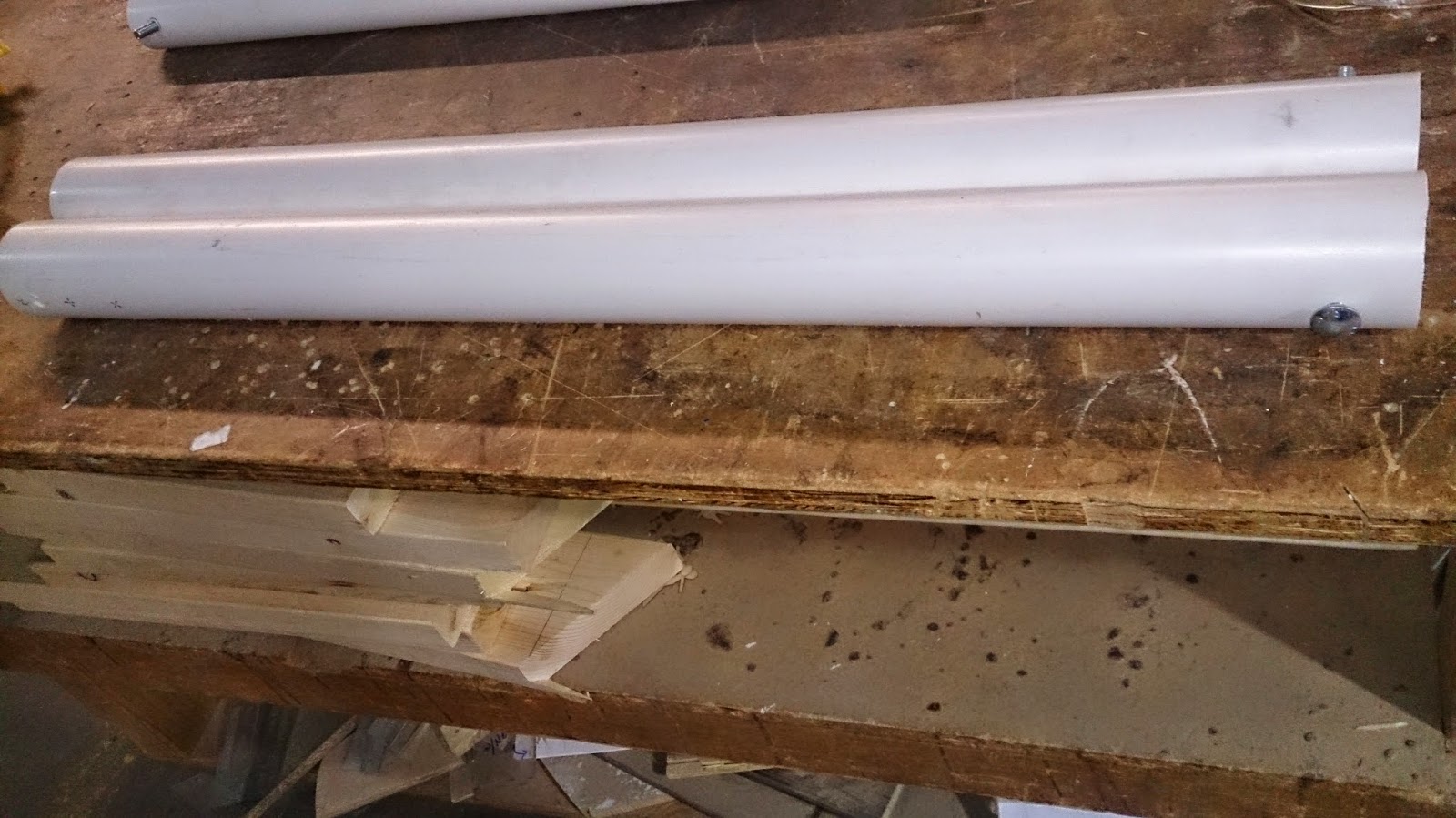 The pipes are fastened together with a long 5/16" bolt 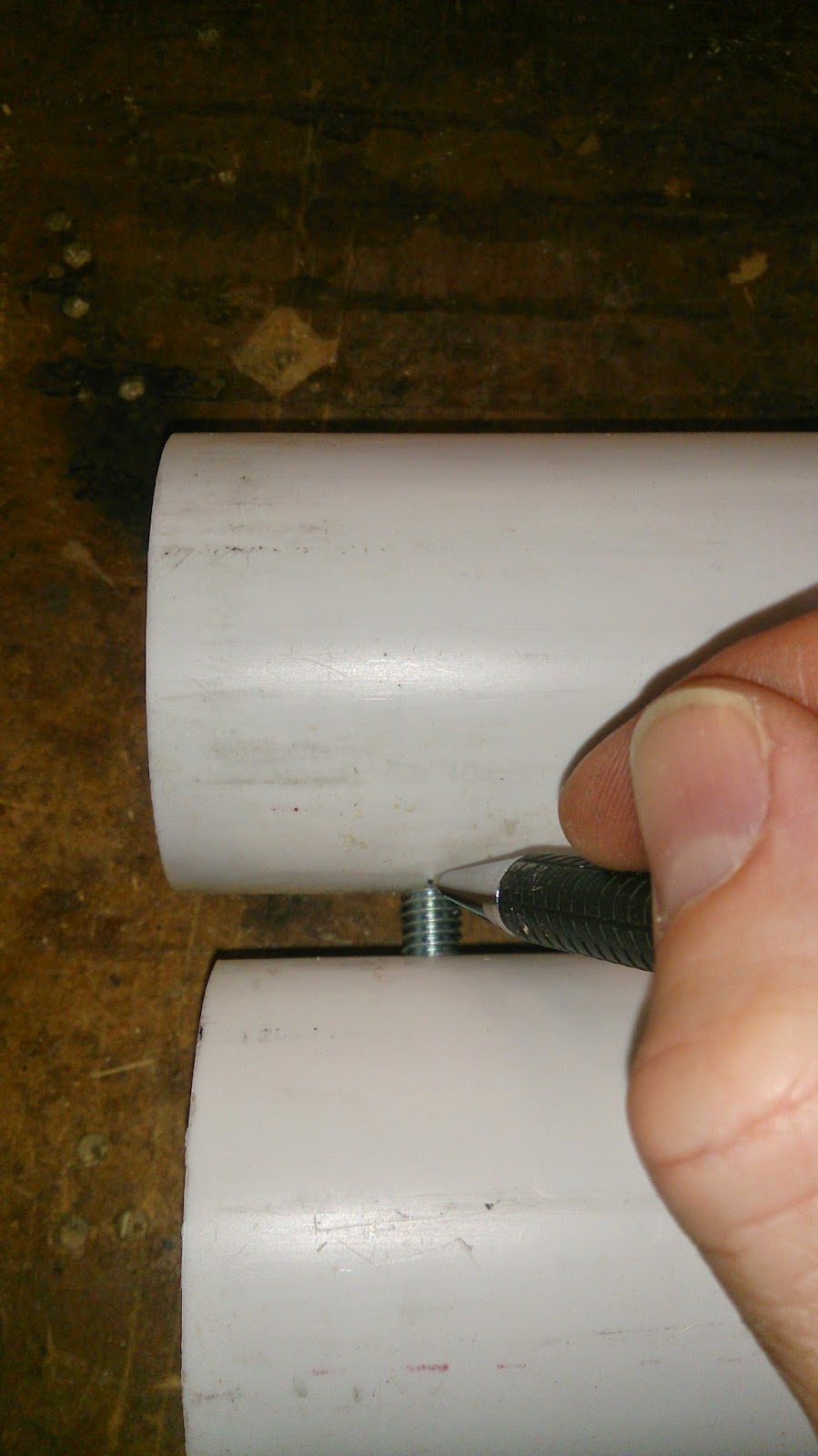 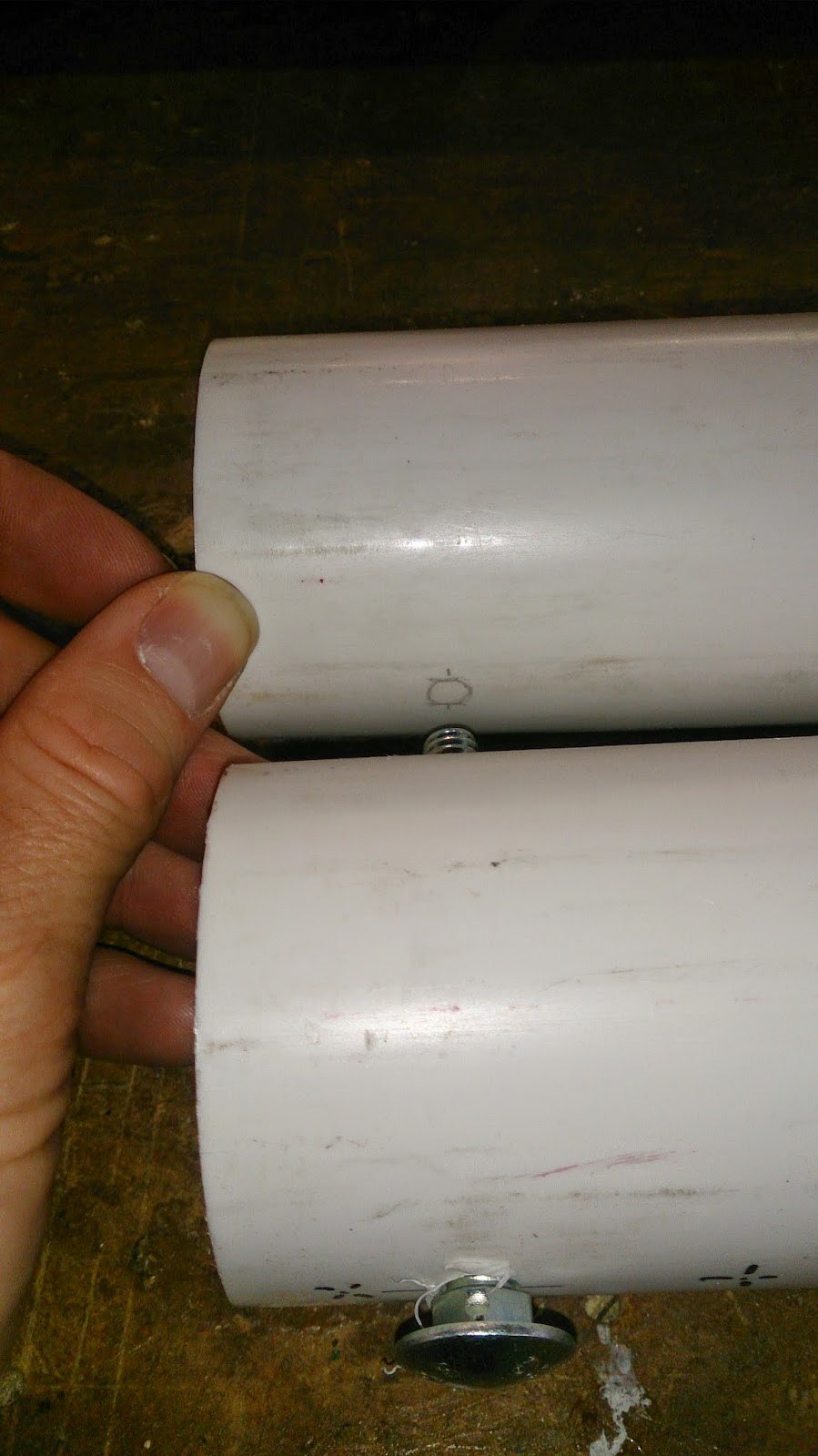 The next step was drilling 7/8” holes in the PVC for the pulleys and bungee to pass through.  The holes from the first pipes were copied by laying the pipes together and making marks where the holes began and ended.  The 7/8” drill bit was lined up to make the edge stop at the mark.  A rotary tool with a sanding drum was used to complete the hole and smooth over the edges of the hole. 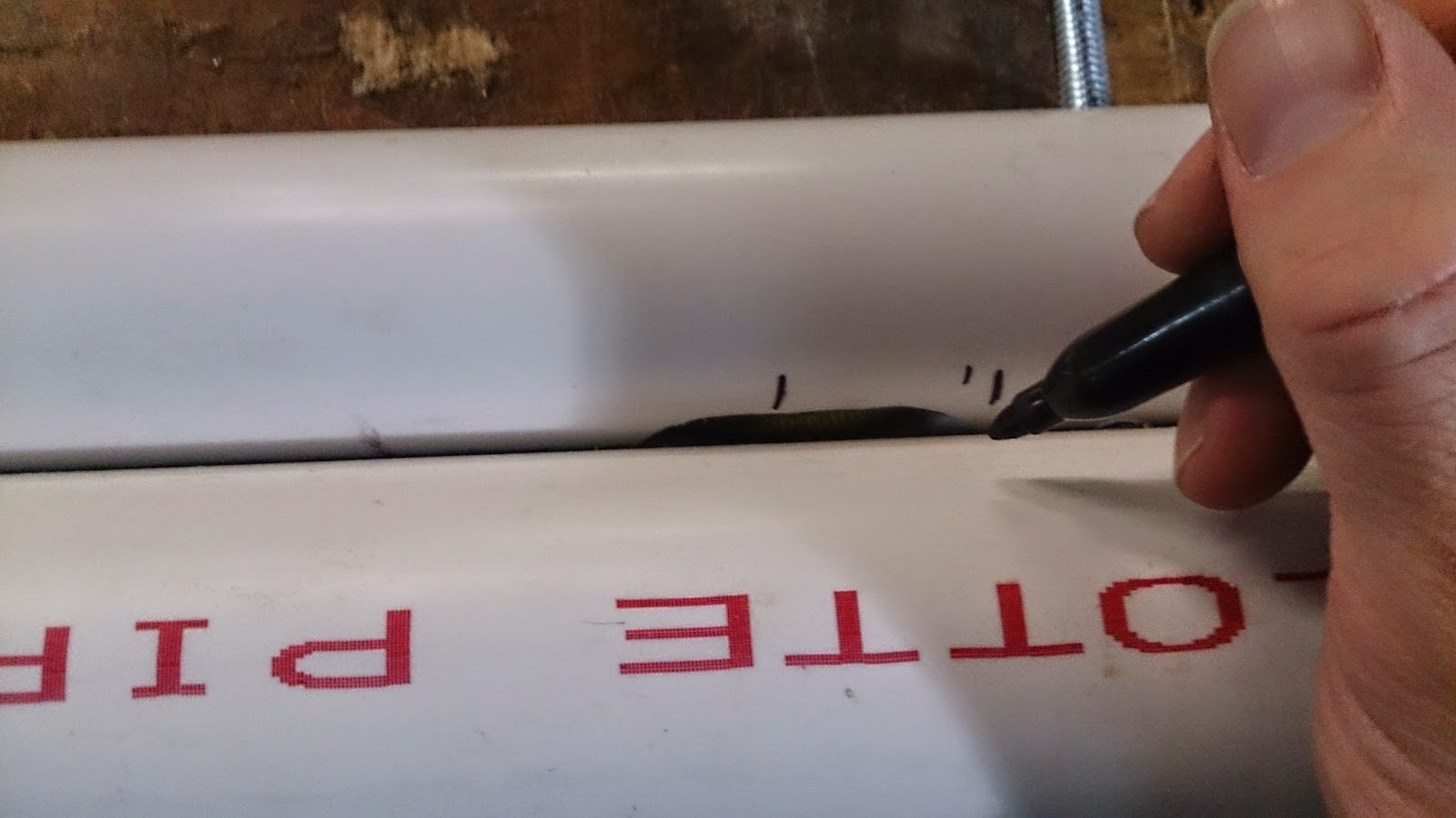 Marking the holes based on the first version 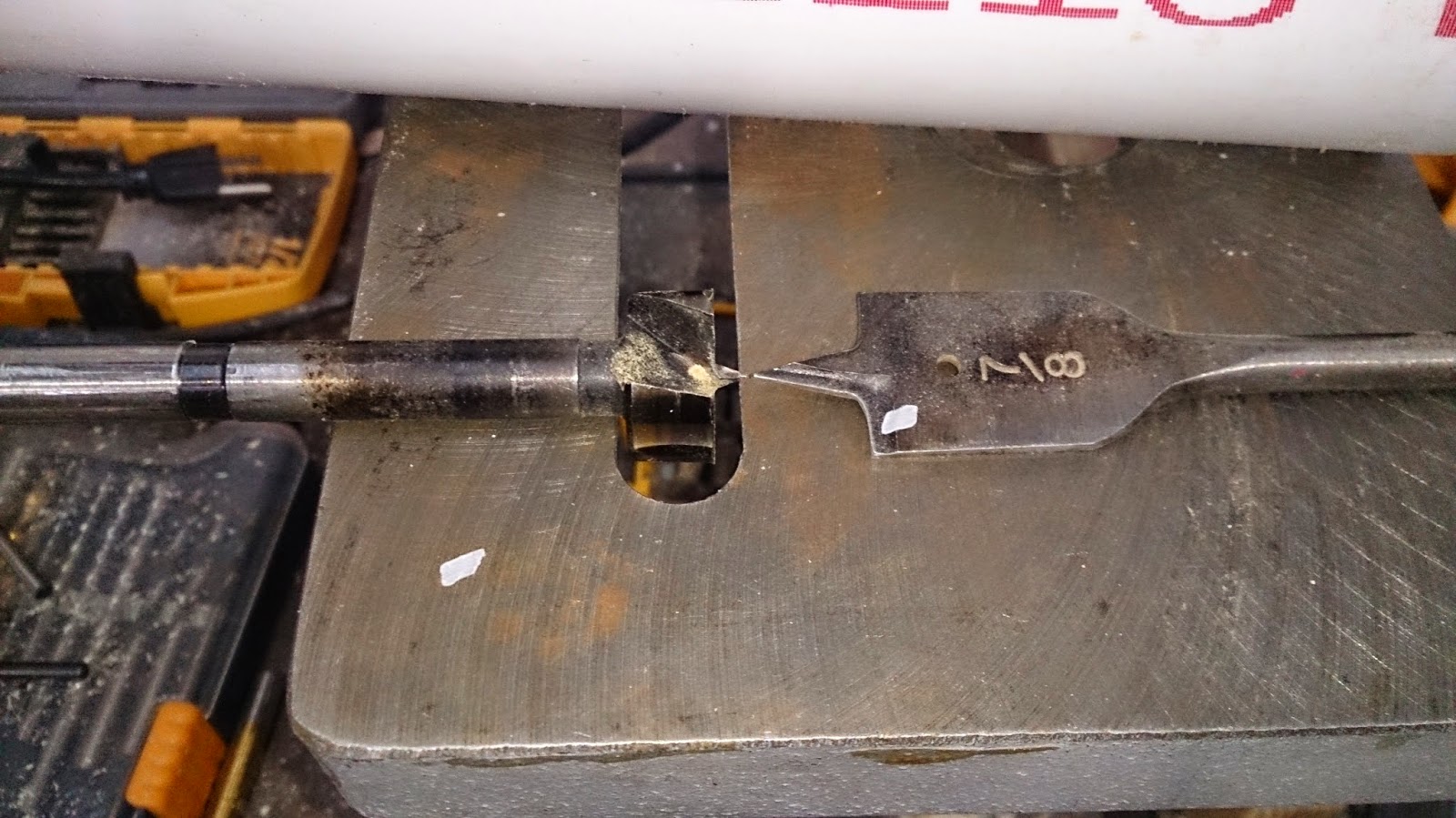 Two 7/8" drill bits.  The Forstner bit on the left was used in this project 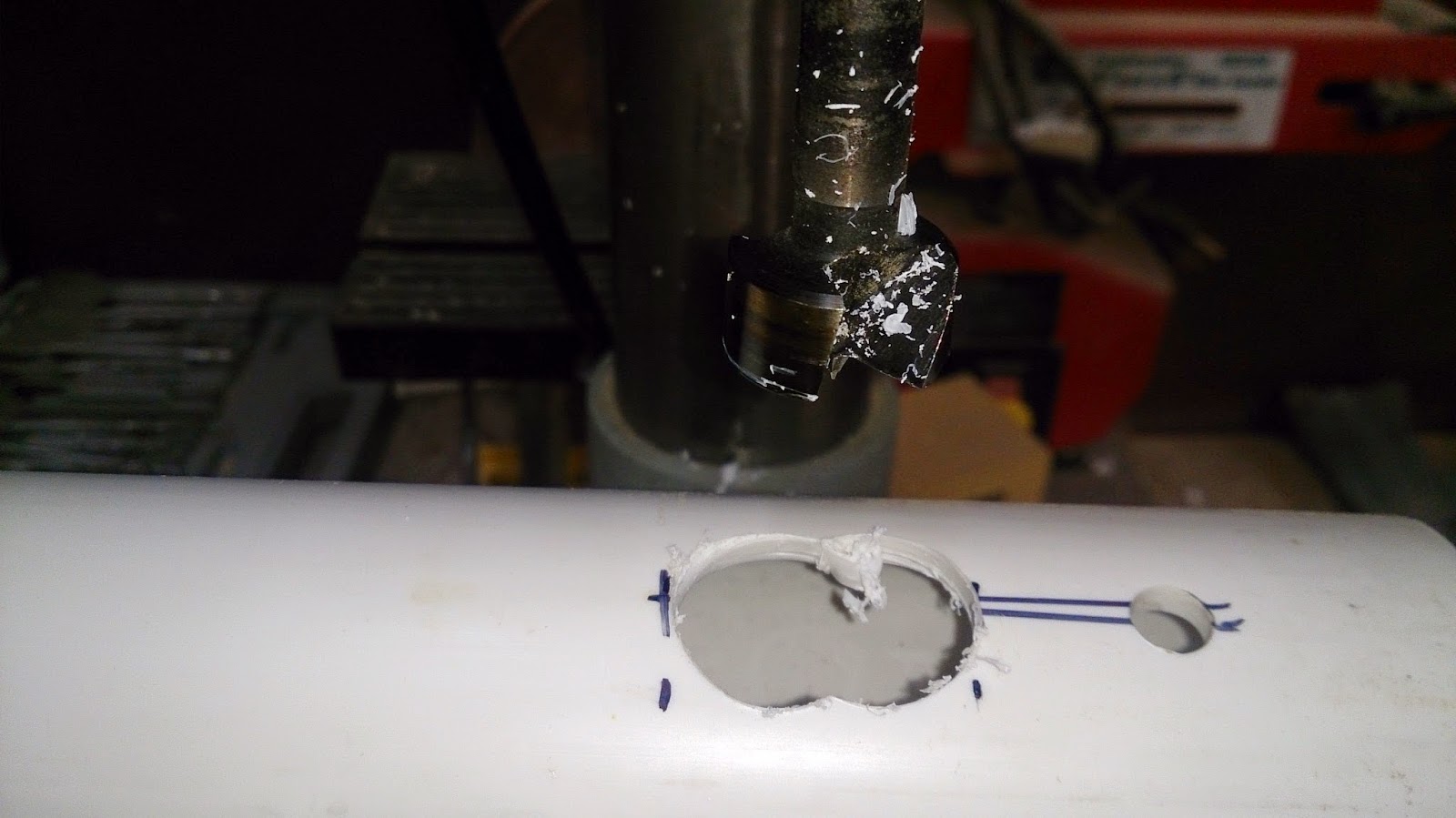 Two holes made with the Forstner bit 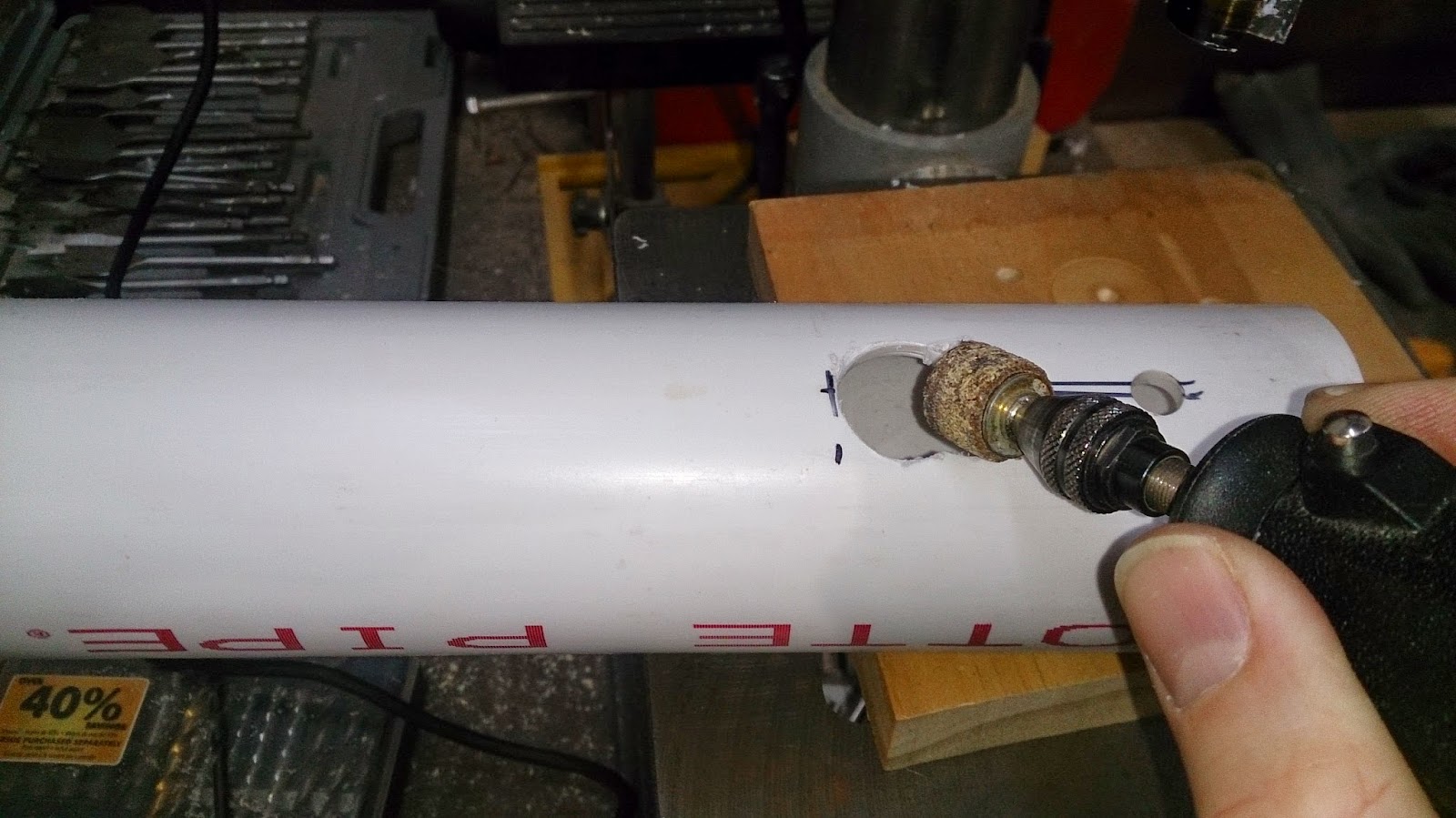 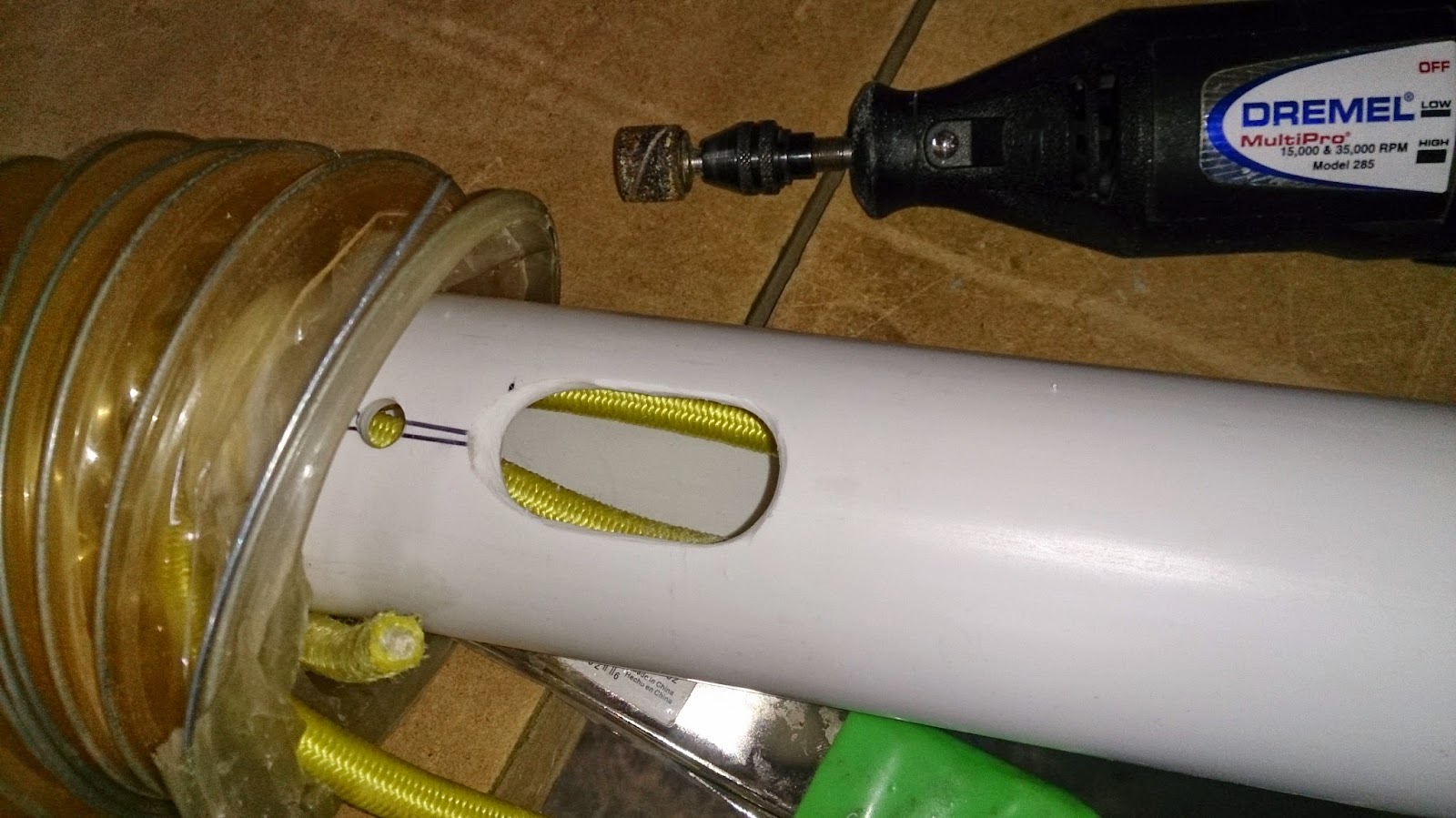 The sanding was done in a vacuum tube to minimize dust

The bungee was reinstalled along with the pulleys.  There is considerably more tension on the bungee cords.  It may be important to redrill the holes at one end of the PVC and lessen the tension.  It would also be possible to install a variable tension system to make the power adjustable. 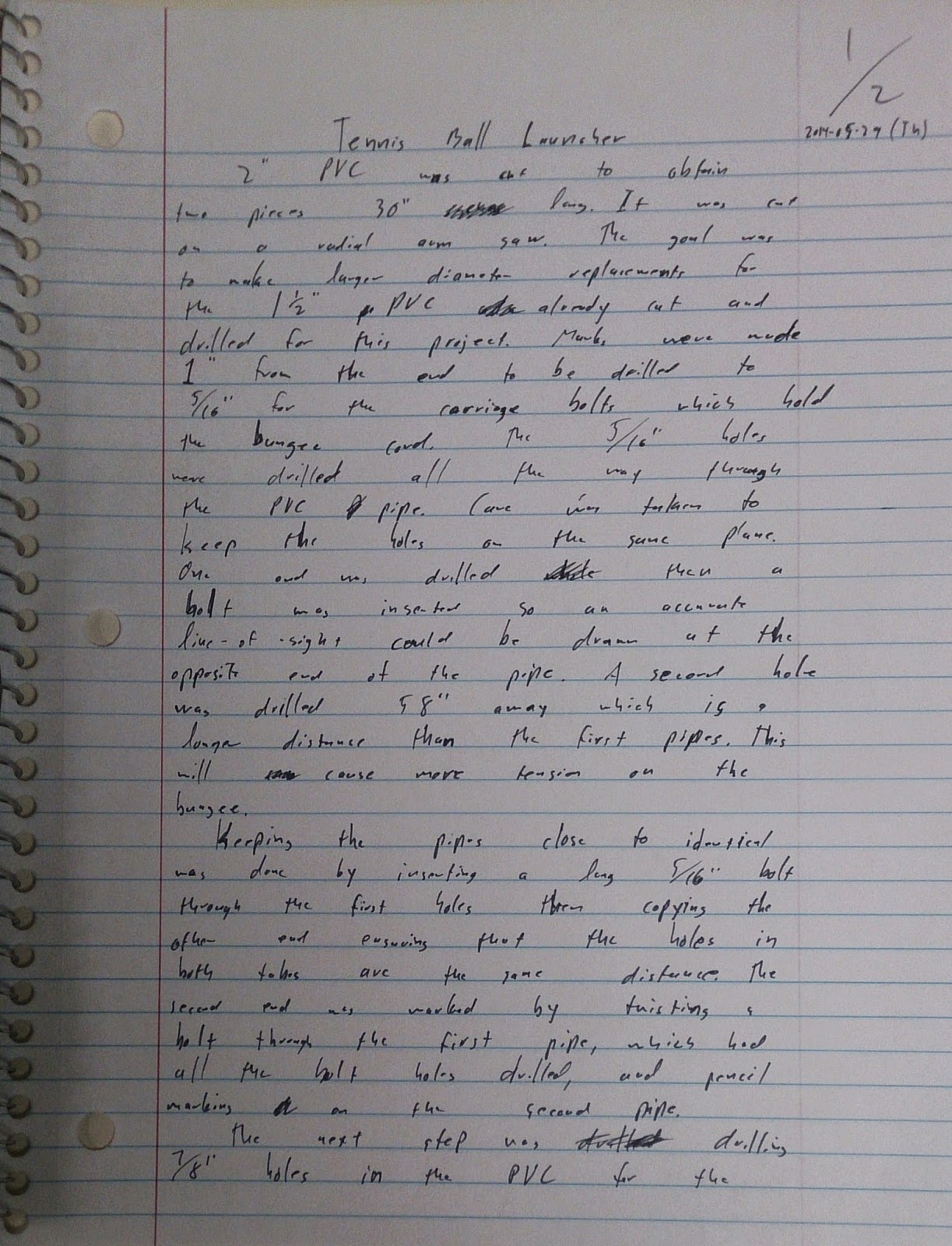 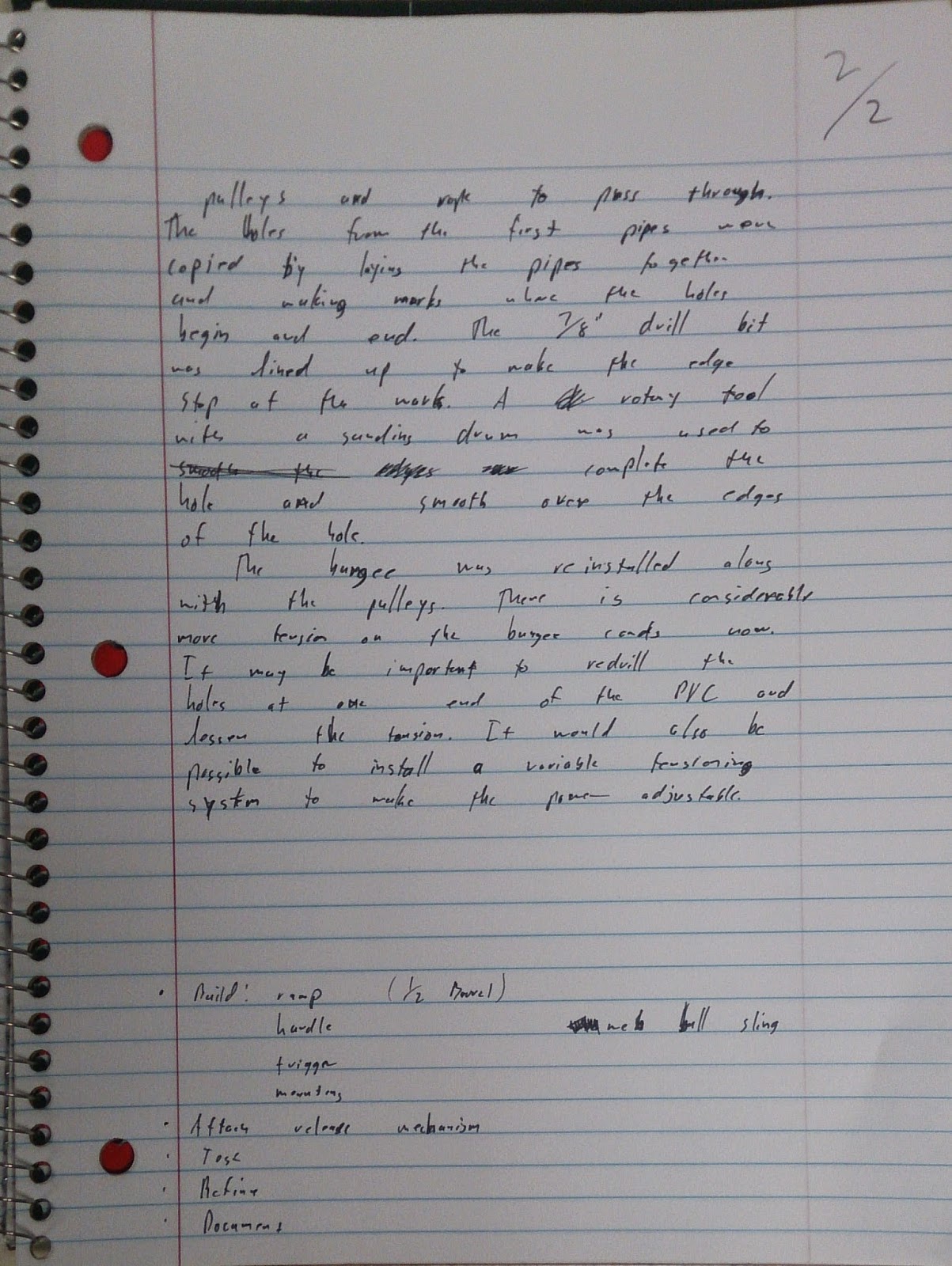