For a while now I’ve been thinking about the implantable NFC tags available at Dangerous Things. Part of me thinks that it would be incredible to have a usable tag in my hand that can unlock my phone or tell it to perform a myriad of tasks. Programmable hardware can be automated similarly to do anything from unlocking doors to keeping a gun from firing.

Months ago I put an RFID chip in my left ear which was mainly to see how my body would react to it. I needn’t have worried since the chip uses biocompatible glass and is made for implantation, in domestic animals. I never got around to programming any hardware for use with the RFID chips despite having all the necessary hardware on hand. There’s the obvious problem of placement. An RFID in my ear is hard to scan unless I’m making a hat only I can wear. RFID can be used to unlock an external hard drive but I would have to lay my head on my drive first. 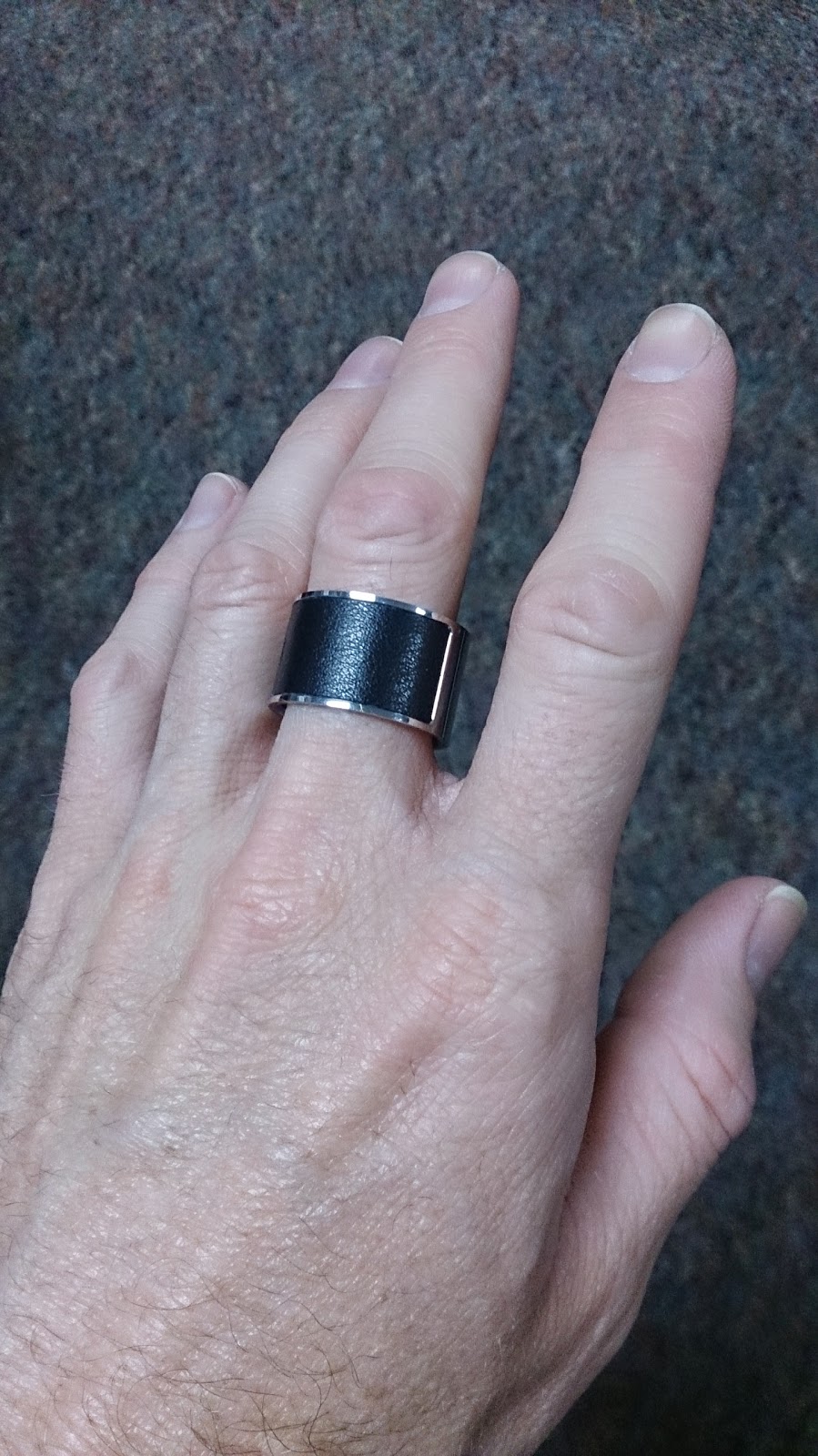 My bony man hand and a huge ring

Having a chip in my hand puts it in the ideal place to unlock my phone or a door or wave my hand and unlock that hard drive. The other question though, would I actually use it? Rather than testing myself by spending $100 plus a piercer to install it I got this RFID ring to give hand-located NFC a test drive.

I got the ring on Monday evening and put it on IMMEDIATELY. This is the biggest ring I’ve ever worn and I don’t wear a lot of jewelry that doesn’t need a piercing hole so it’s taking some getting used to. So far, being able to unlock my phone without a passcode is great but the ring is uncomfortable. It has sharp edges and is just plain monstrous. I don’t have large hands for a guy and a medium size ring is shifty on my middle finger. These factors will make me decide on the implant sooner. I’ll keep updating.

A large galvanized steel corner brace was purchased the other day. It was cut to obtain two straight braces. It was possible to buy two suitable straight braces this was less expensive and more importantly the result is two identical pieces with three holes rather than a straight brace with an even number of holes which would need a new hole drilled in the center to make the hole-pattern symmetrical about a central hole. The corner brace was cut twice on a horizontal band saw. The resulting scrap was a square which was recycled. 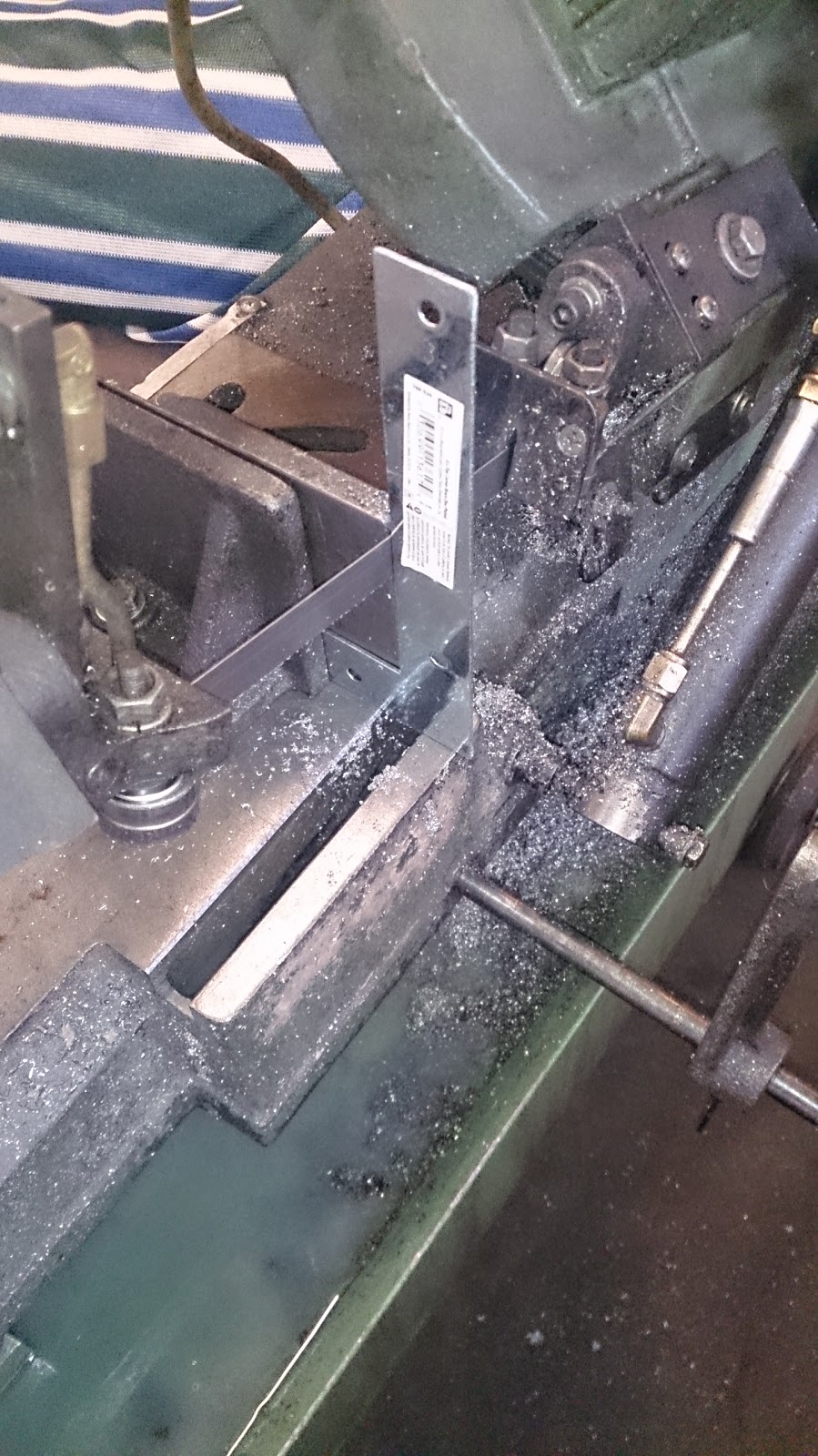 First cut on the band saw 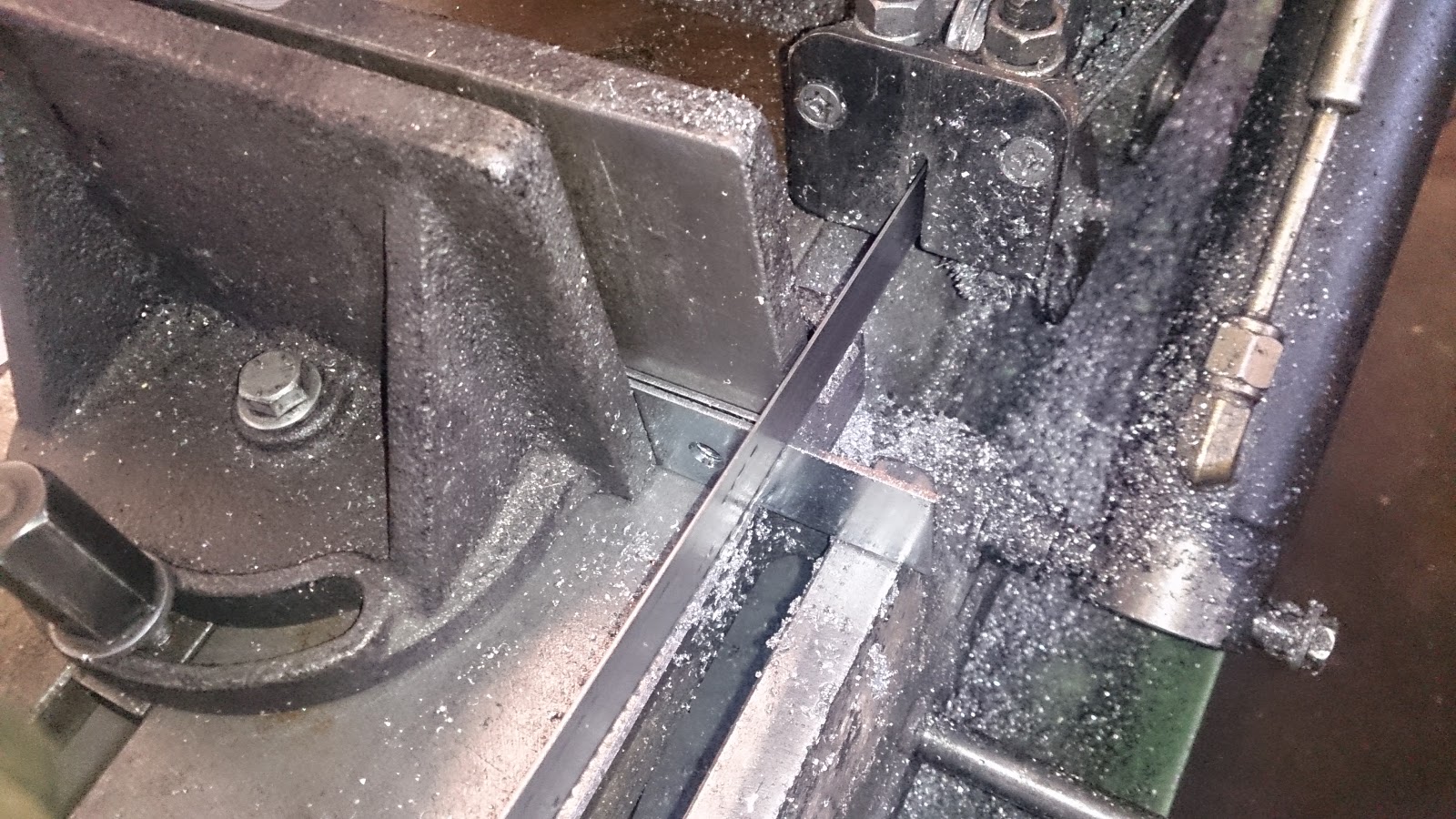 Second cut on the band saw 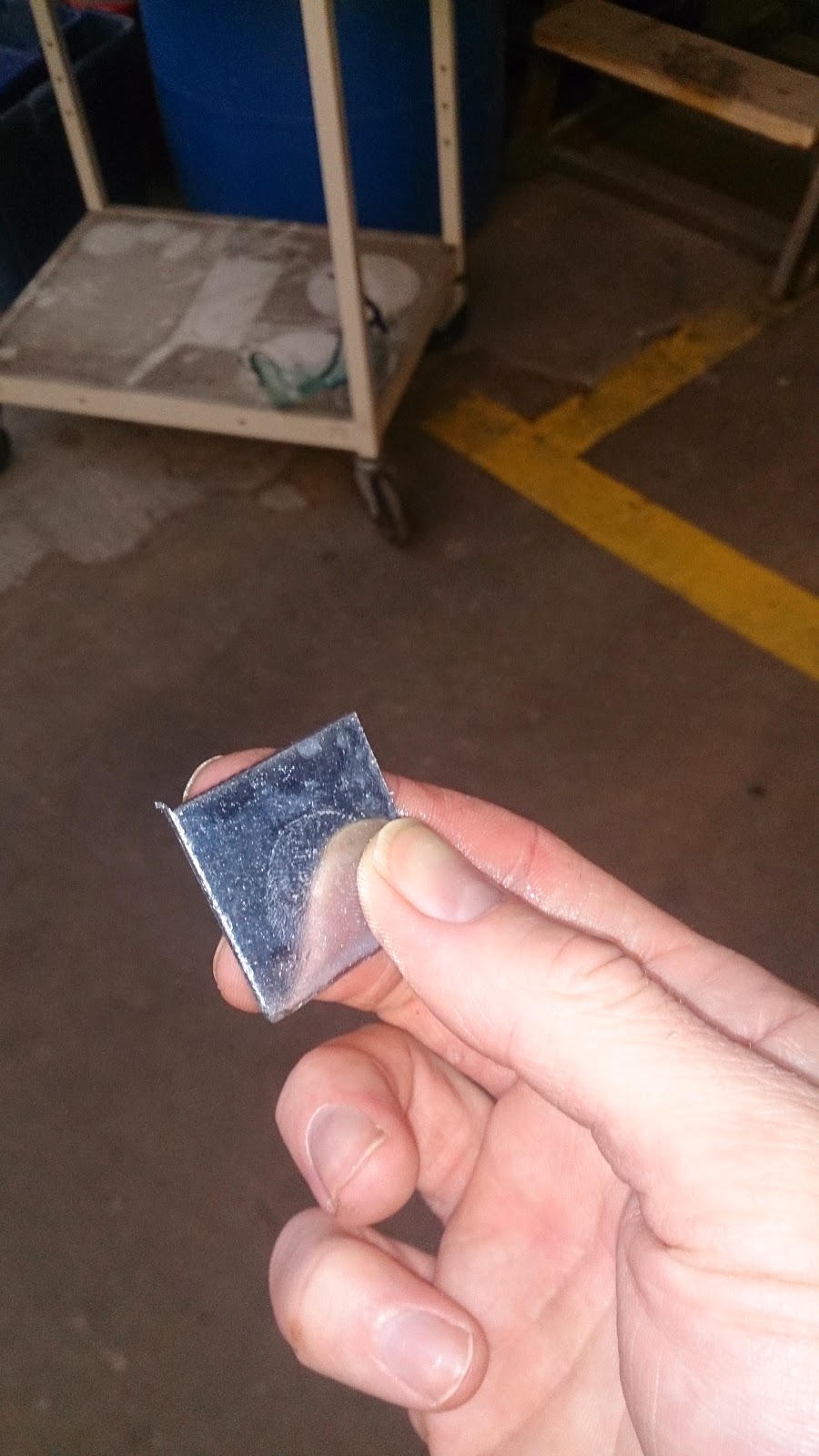 The straight brace ends were ground on a bench grinder then polished on a belt sander to make smooth edges which won’t cut skin or abrade bungee. The holes in the braces were drilled out to 5/16” on a drill press. 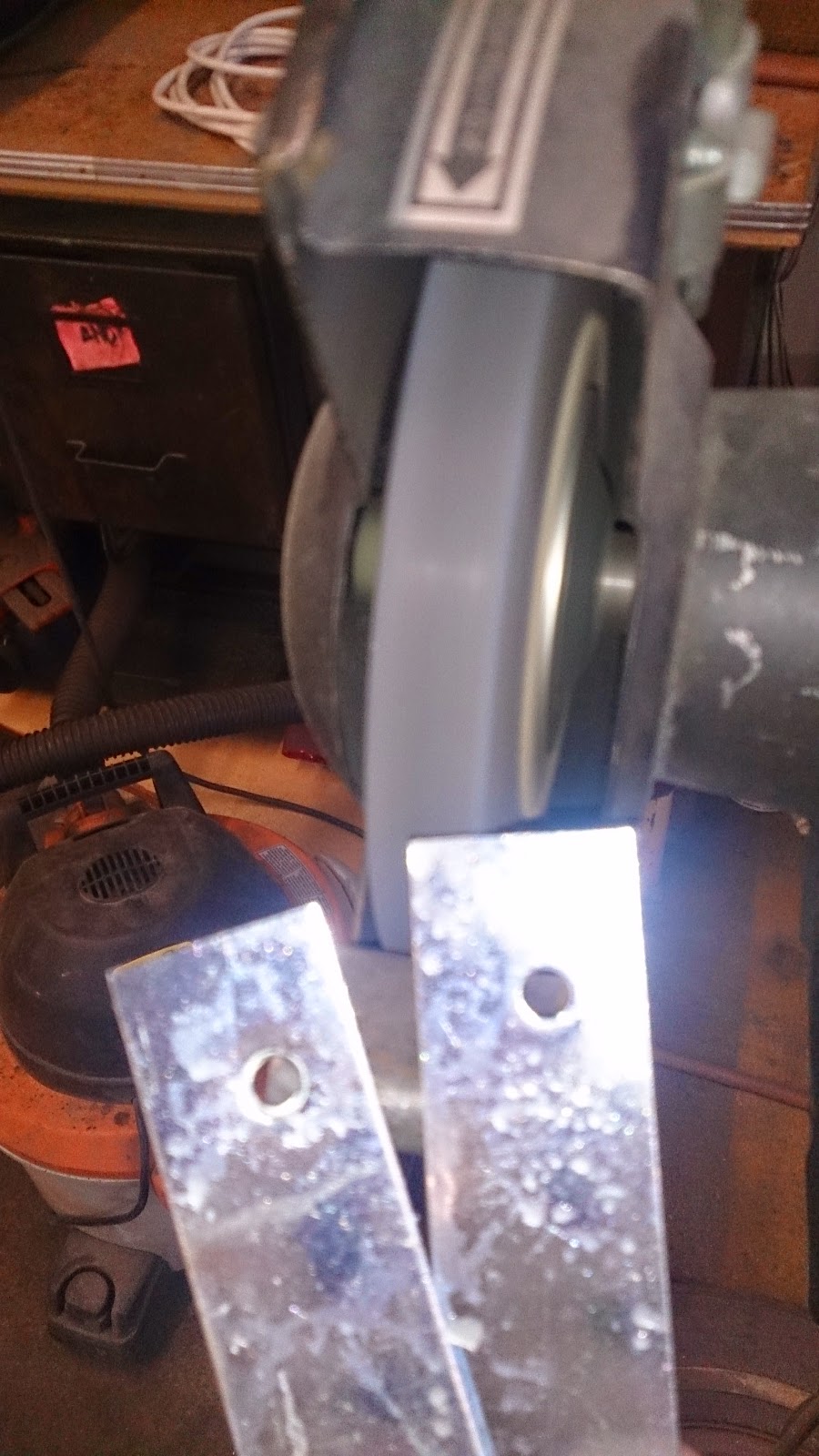 Rough ends about to be ground smooth on a bench grinder 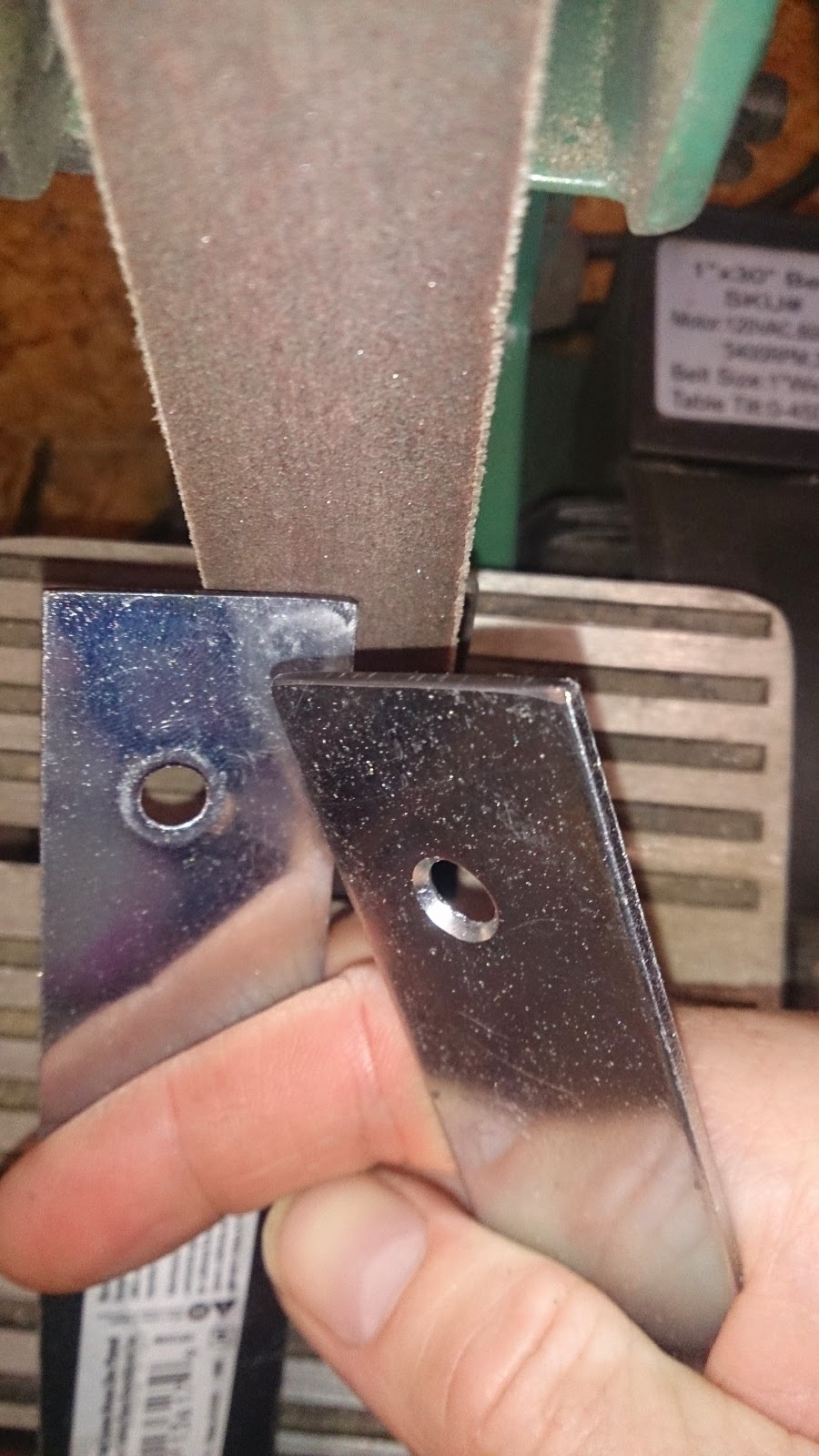 Ground ends about to be polished on a belt sander 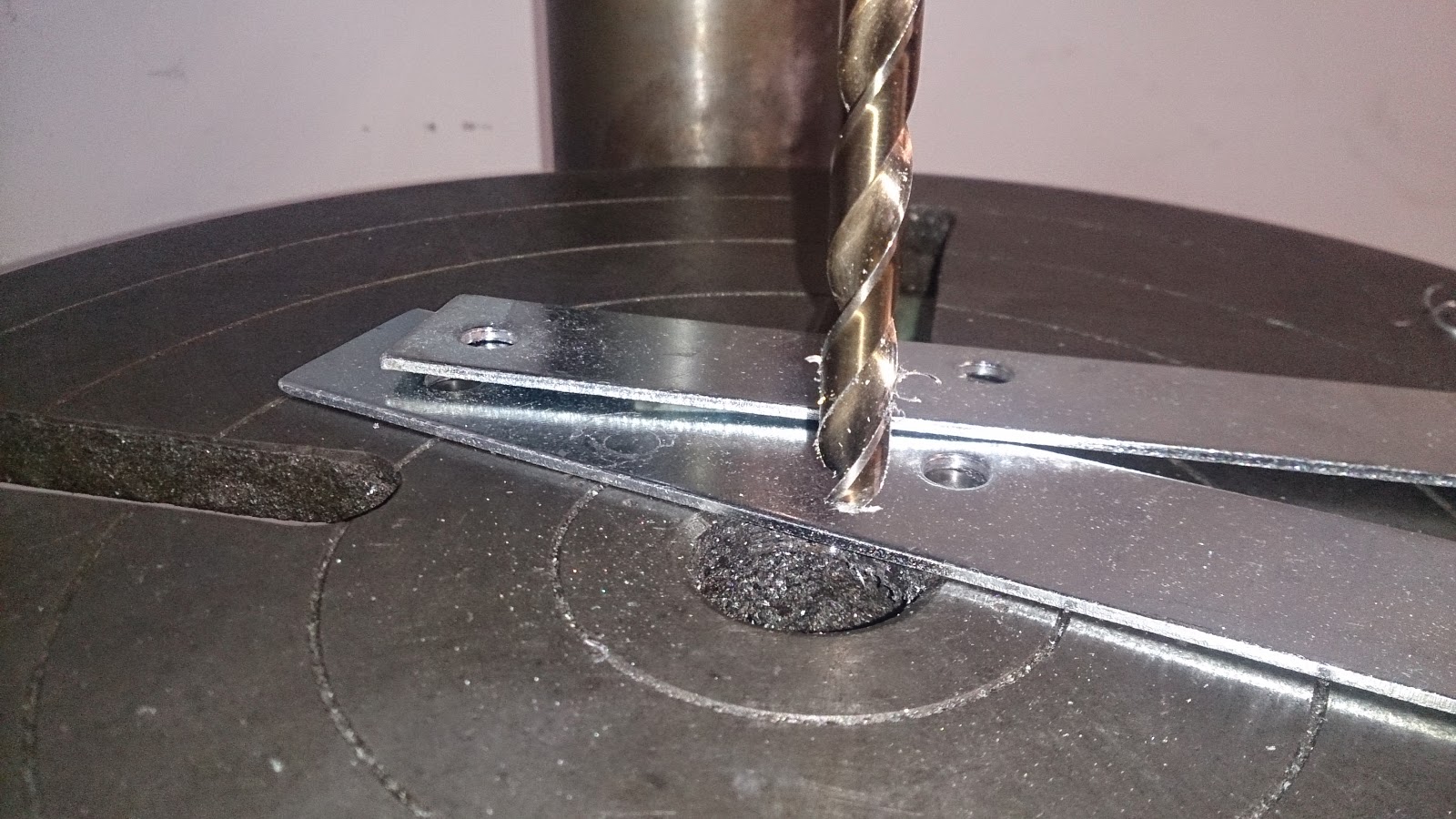 Drilling the braces to 5/16" on a drill press

The braces were installed, via the central hole, on the PVC pipes. Two pieces of 5/16” threaded rode were cut to give adequate spacing. The threaded rod ends were ground and polished the same way as the braces. 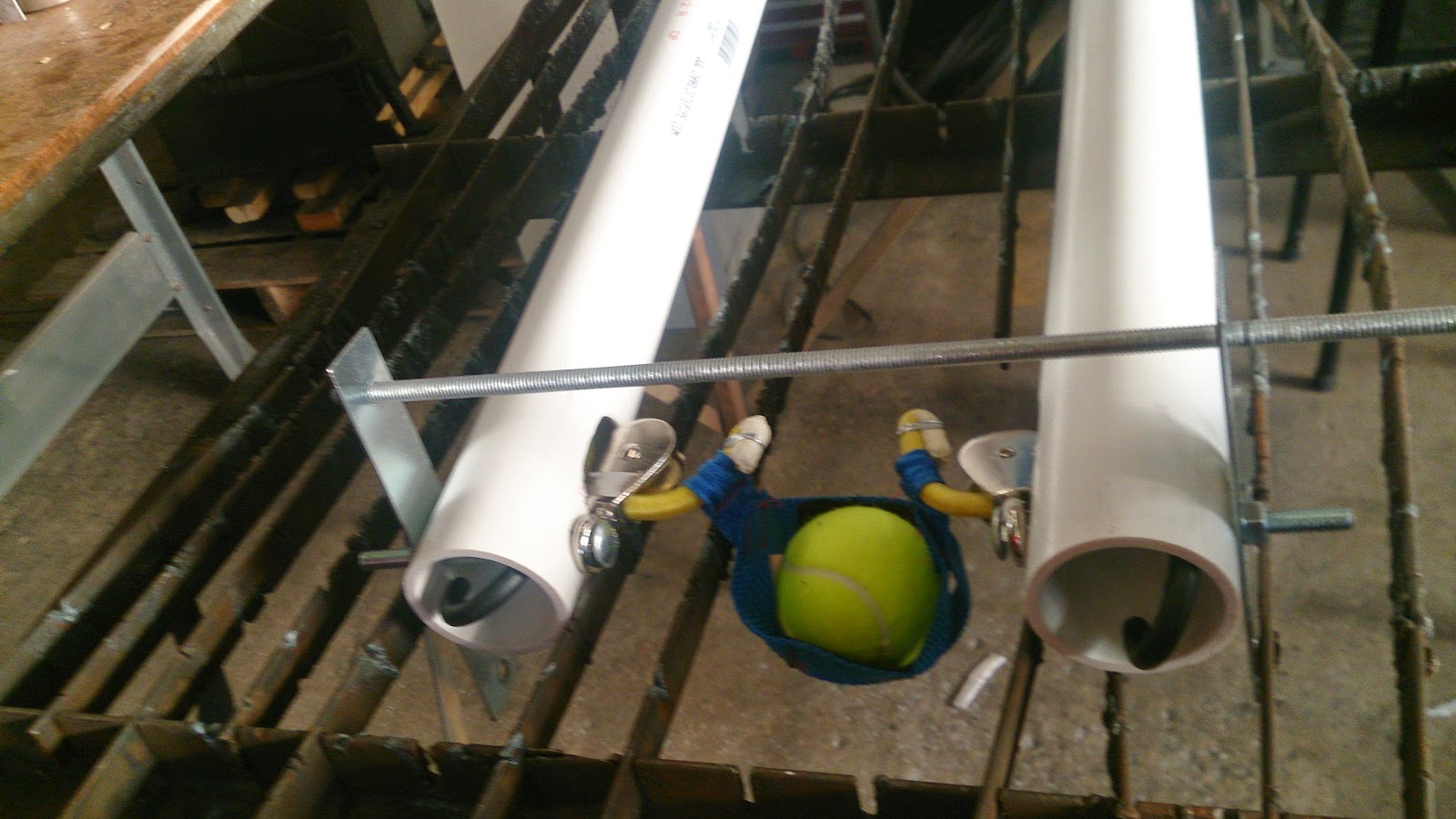 Getting a length for the threaded rod 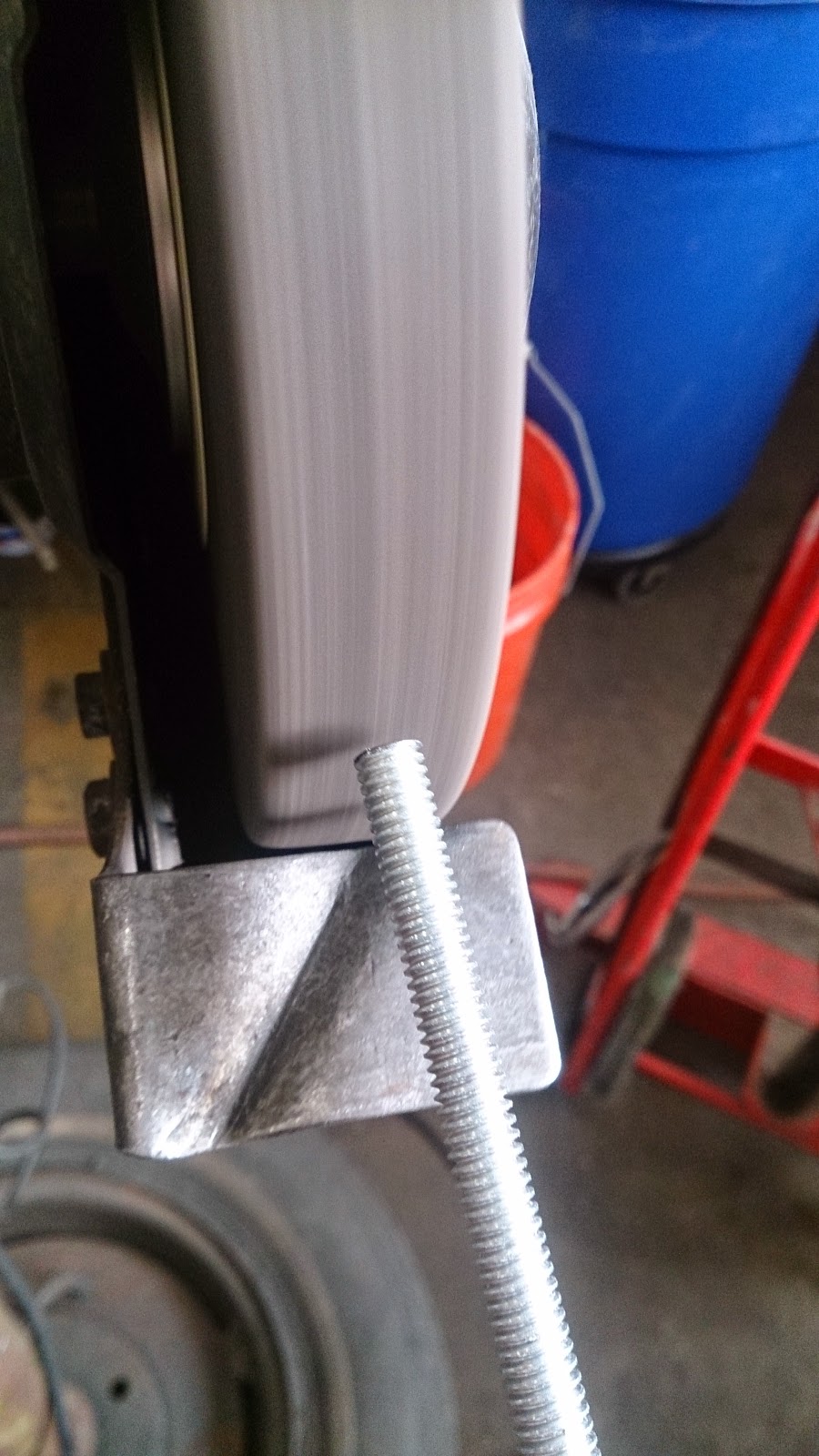 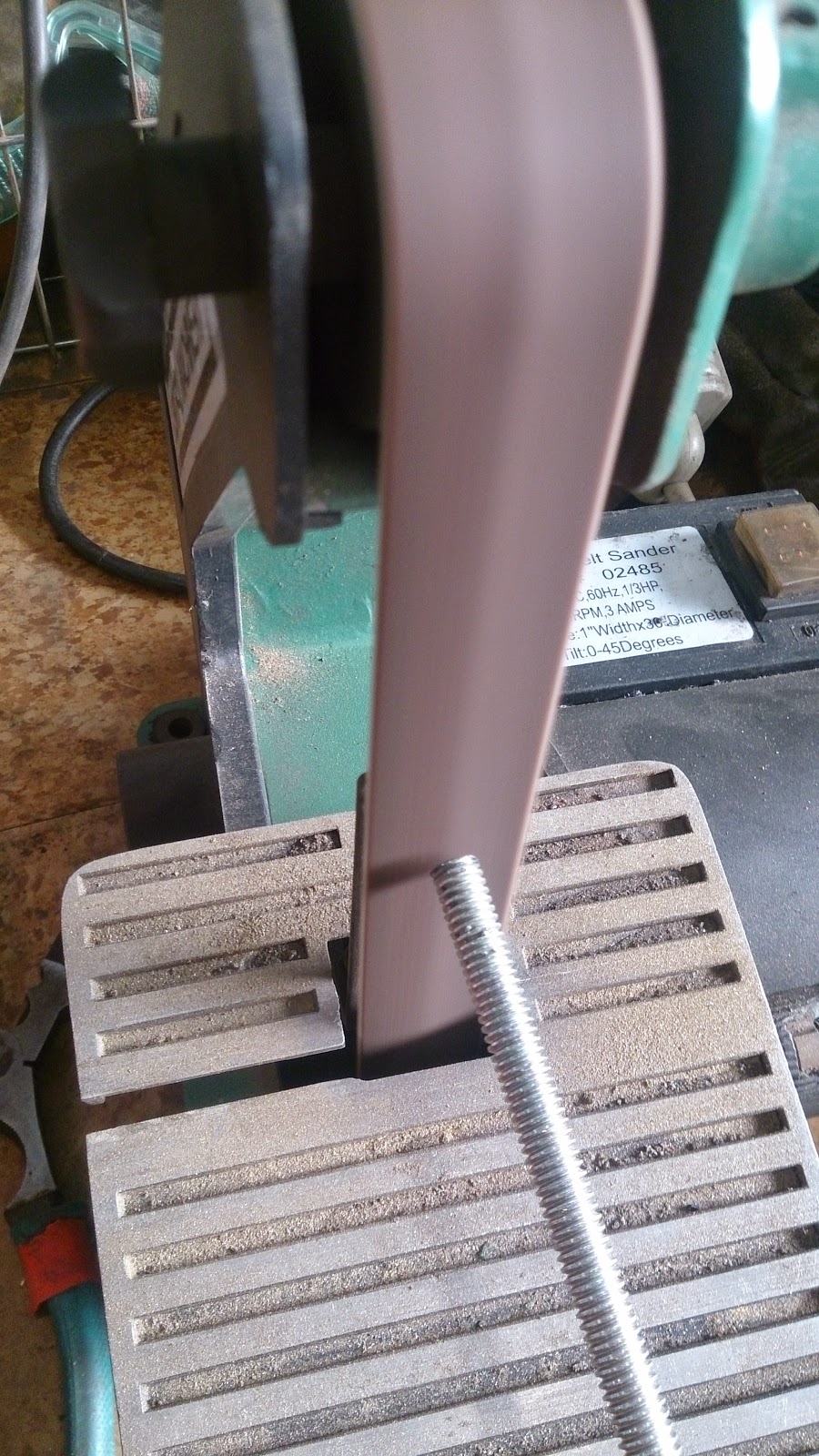 The unit was reassembled along with the threaded rods at the front. The back of the launcher was fitted with the scrap 5/16” threaded rod meaning that nothing on the 48” length of threaded rod was wasted. The front fixture, with the braces, is not fixed in place and can rotate to block the path of the tennis ball. A screw hole in the braces and screws into the PVC could eliminate this trouble. 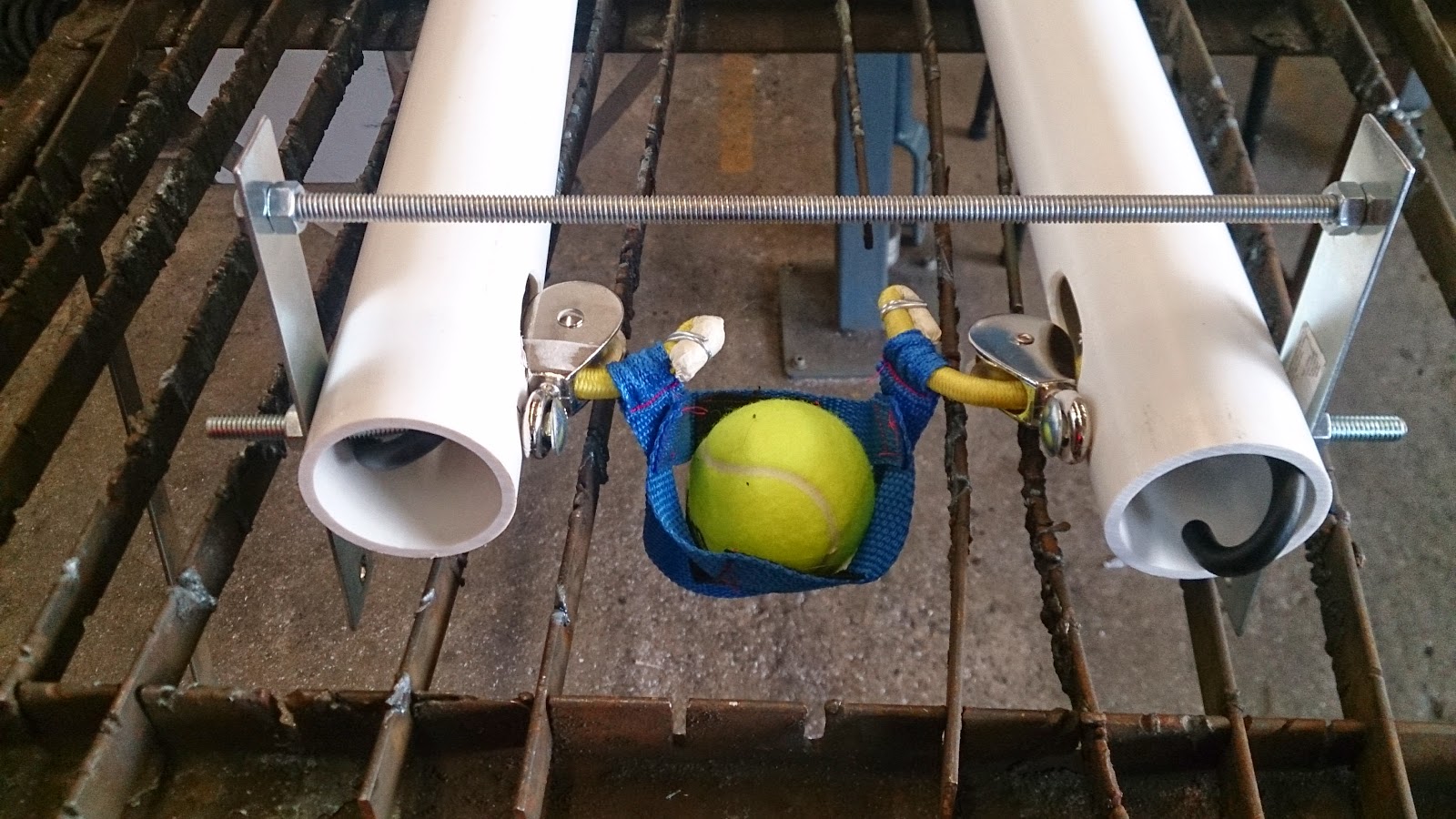 The top threaded rod in place 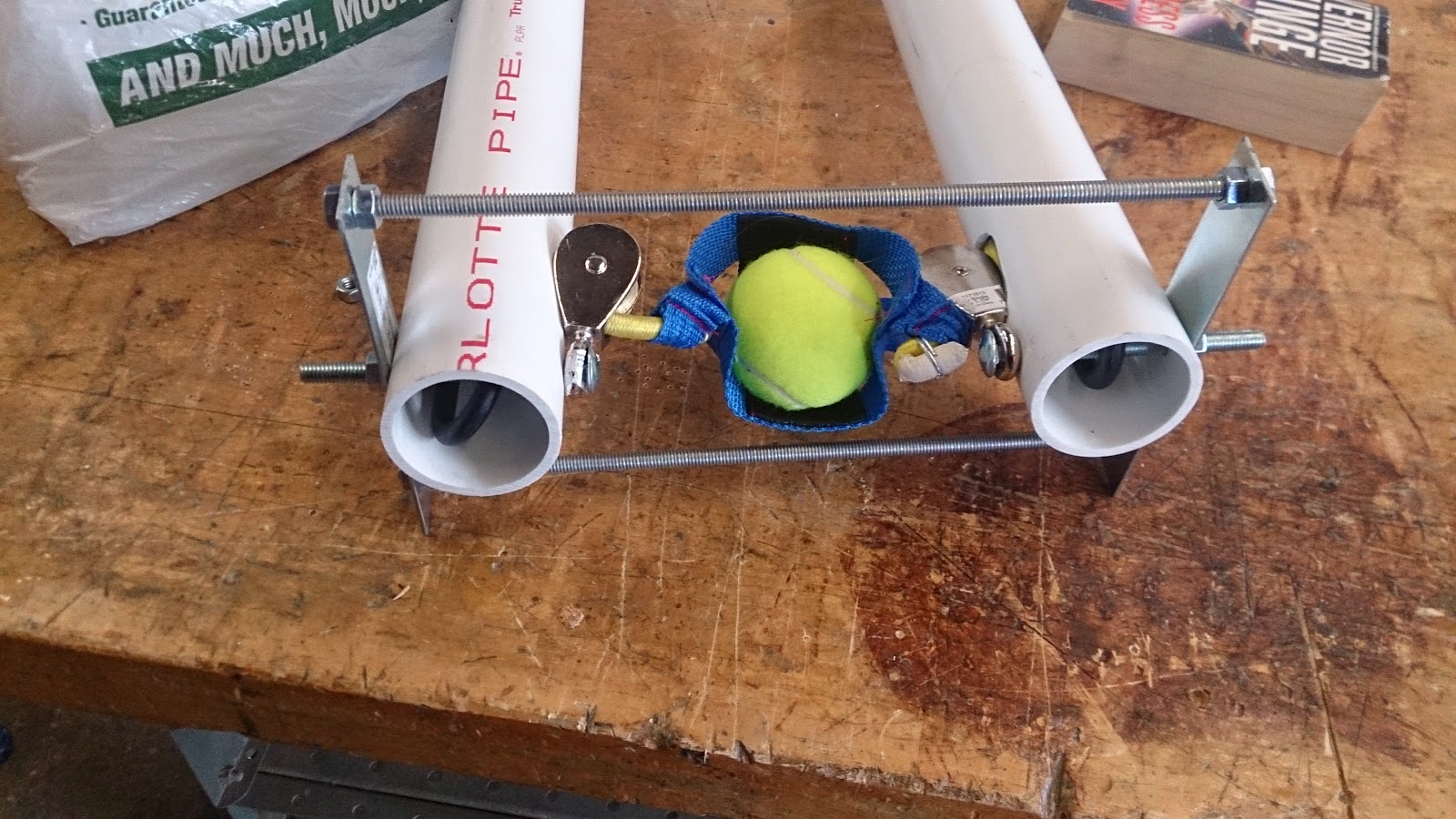 The bungee was retensed and the rear strut was bolted in place. A test shot was fired by pulling the tennis ball hammock back roughly twelve inches and manually releasing. 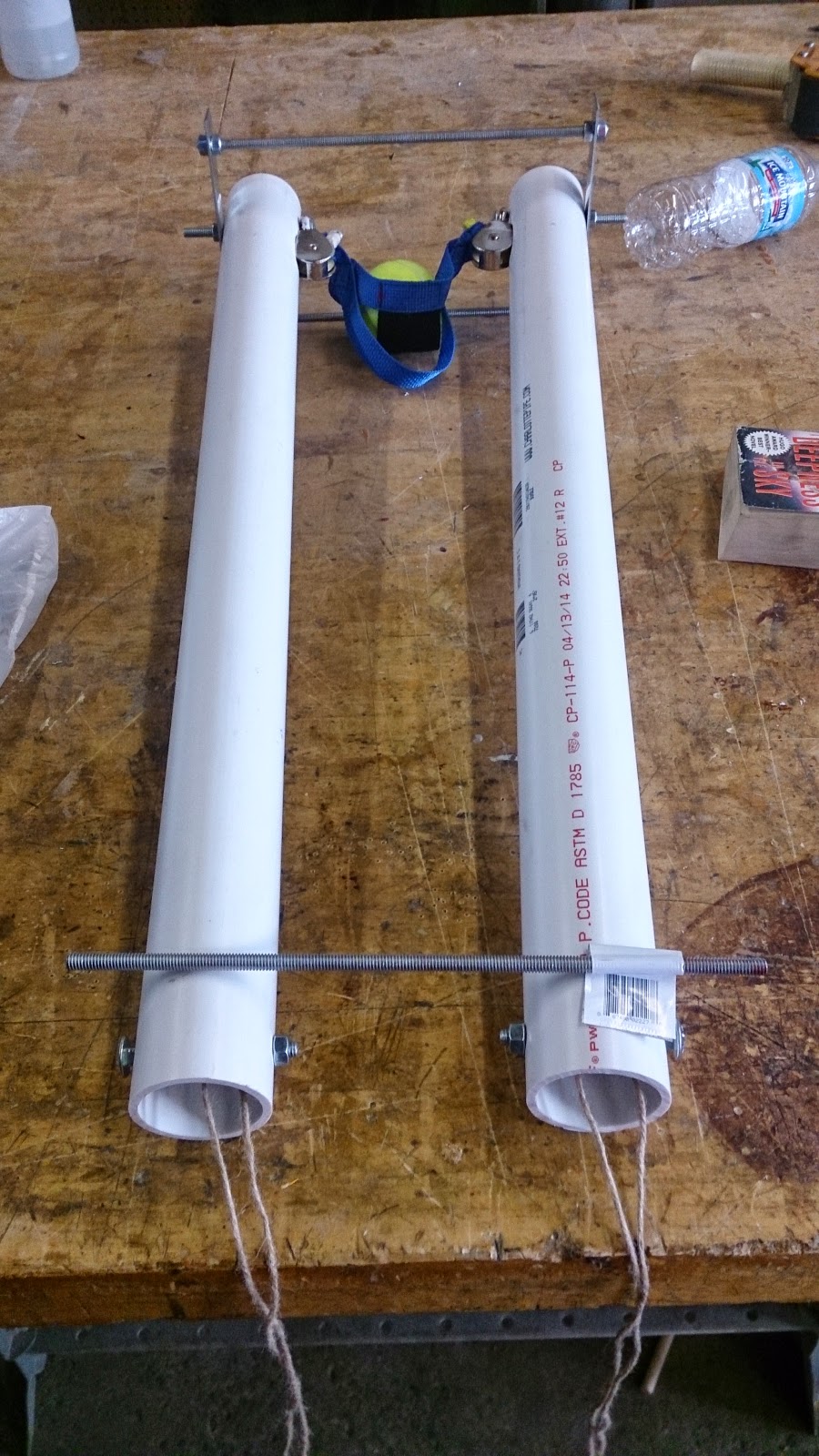 Position of the rear support

Video of launch. It ricocheted off a girder and hit my impromptu camerman