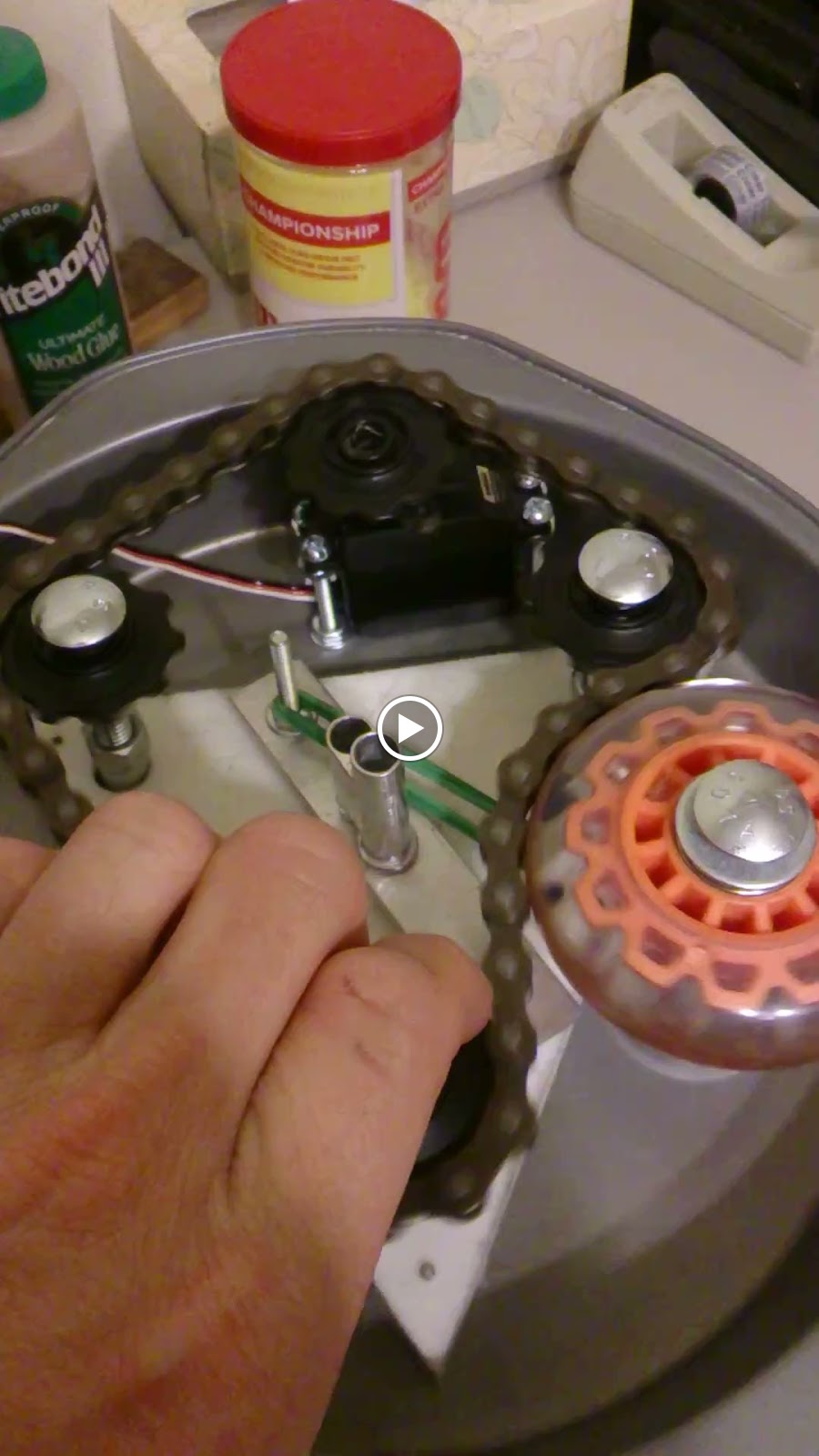 Picking up a project after it has been idle for nearly a month isn’t easy. The last time I worked on the 3D Printer was over half a month ago and I left it at a tricky stage. The printer wasn’t at a troublesome stage per se but it was at this weird limbo stage.

Adam Savage describes it nicely in this speech at the 2014 Bay Area Maker Faire. In the first ten minutes he lists his 10 commandments of making and number seven is what really struck me. It seems I’m not the only one who has projects hang up as they are nearing completion, rather, that seems to be the norm. Mr. Savage posits that this happens around the 70 percent mark.

Judging by how much of this machine is built and the relatively short list of “To Do” items that seems pretty spot on. It’s heartening to know that this point is a speed bump, not a wall.

I started a new notebook and I think I found the one Wide Ruled notebook in the college rule stack.

A diagram detailing the correct hookup of the servos was sketch on a sticky note. The diagram was made from looking at an old picture of how it was hooked up before. 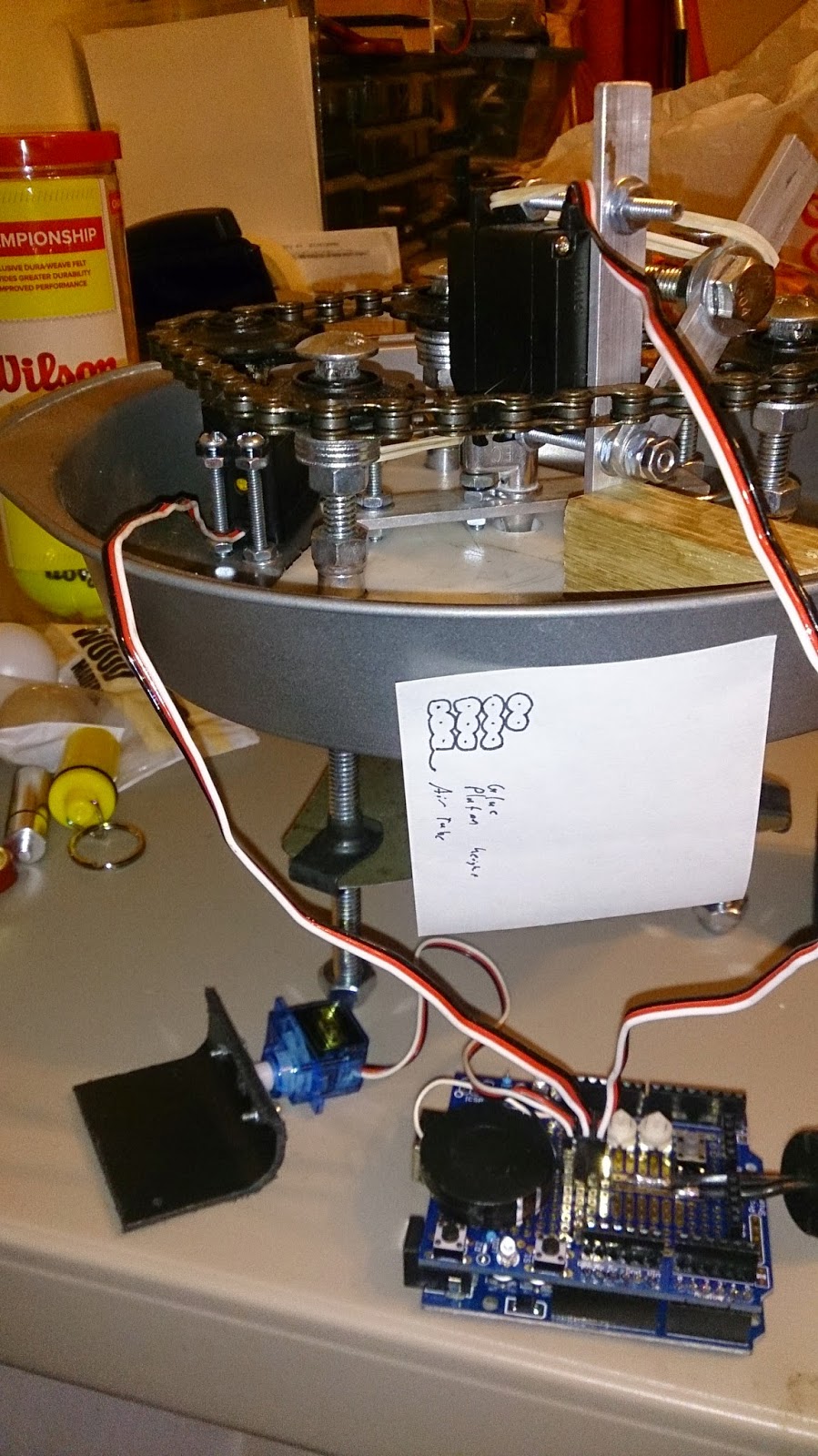 The last testing program was updated to show the angle sent to the servo as well as the raw input from the potentiometer. This angle corresponds to the forward or reverse speed applied to a continuous rotation servo. In a regular servo it would correspond to the angle the servo seeks. The serial screen telling the angle sent by the controller

The platen servo was tested and it encountered a lot of jarring as the sprocket skipped under the chain. This caused to sprocket to dislodge from the servo. The sprocket was preciously glued to a servo horn so it was screwed to the servo actuator with the supplied screw. This worked well and would have been attached later to complete the project. The servo speed was set using one of the debugging potentiometers and it was possible to stop the sprocket from skipping by holding one of the shaft with a finger. 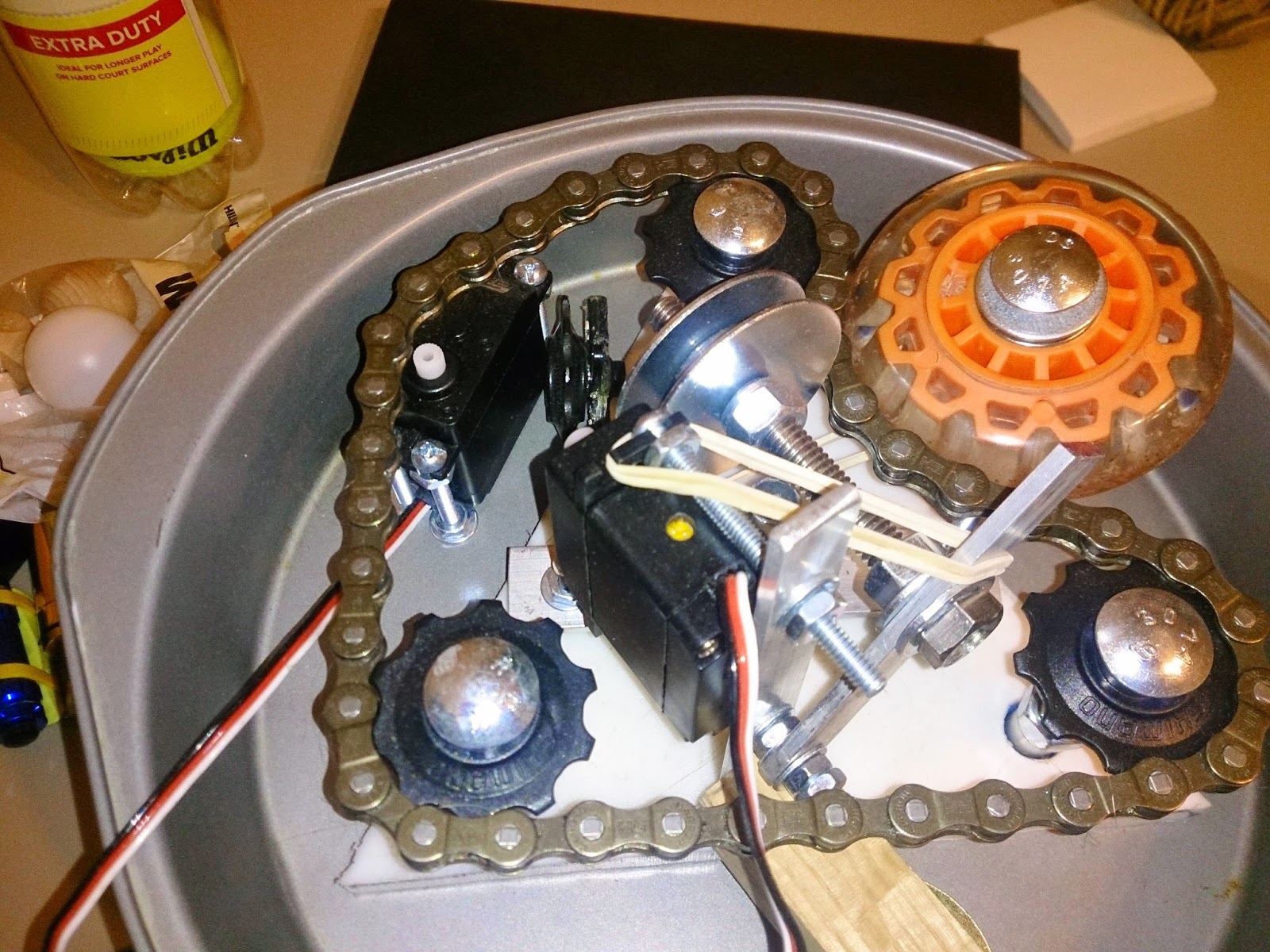 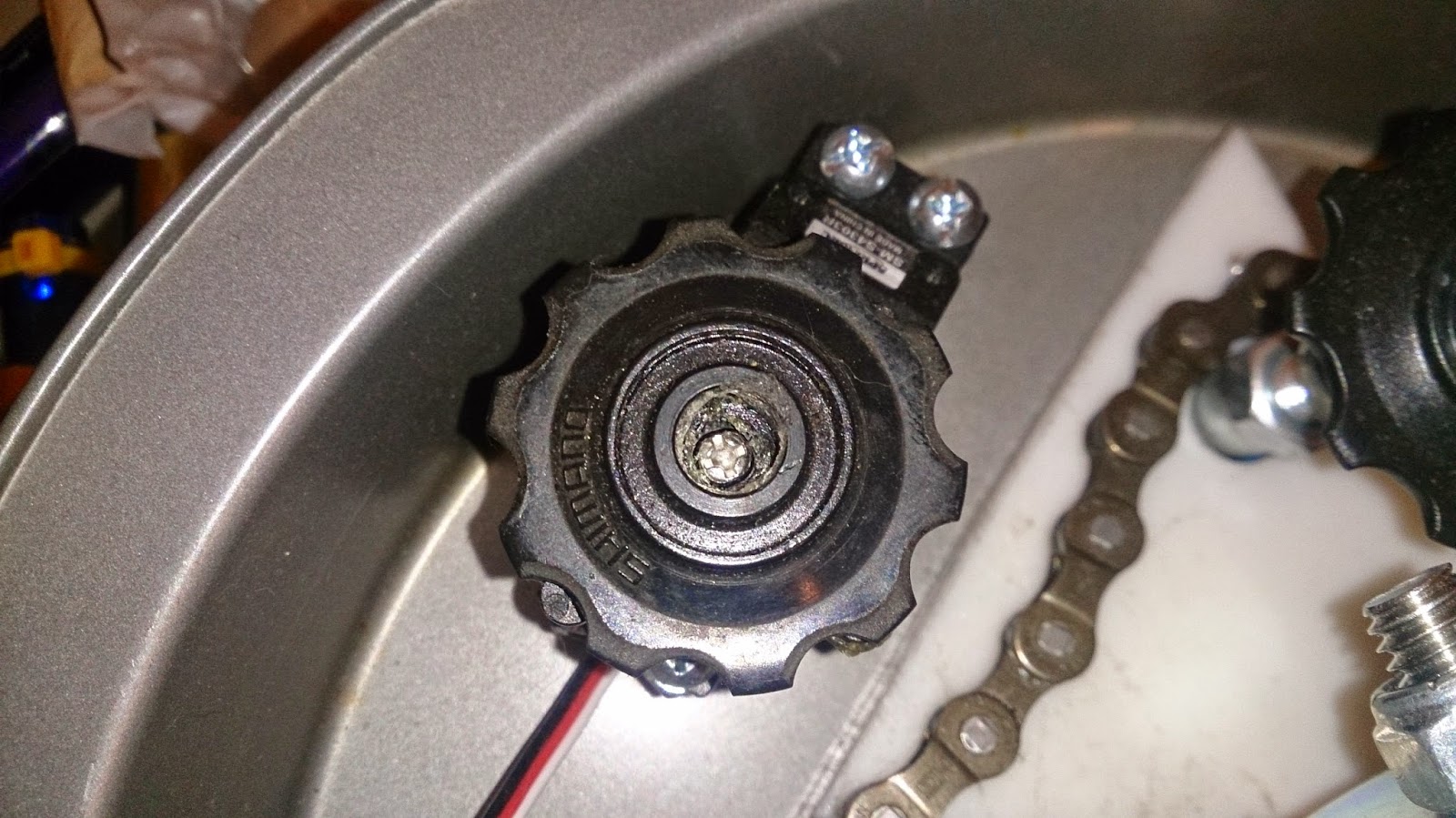 Video of the platenServo and platen moving

The speed of the glue servo was set using one of the debugging potentiometers and feeing a glue stick through the top. This does not take the resistance of the glue gun heating element and nozzle. The saw blade provided good traction as evidence by the marks on the glue stick.

Video of a glue stick being fed through 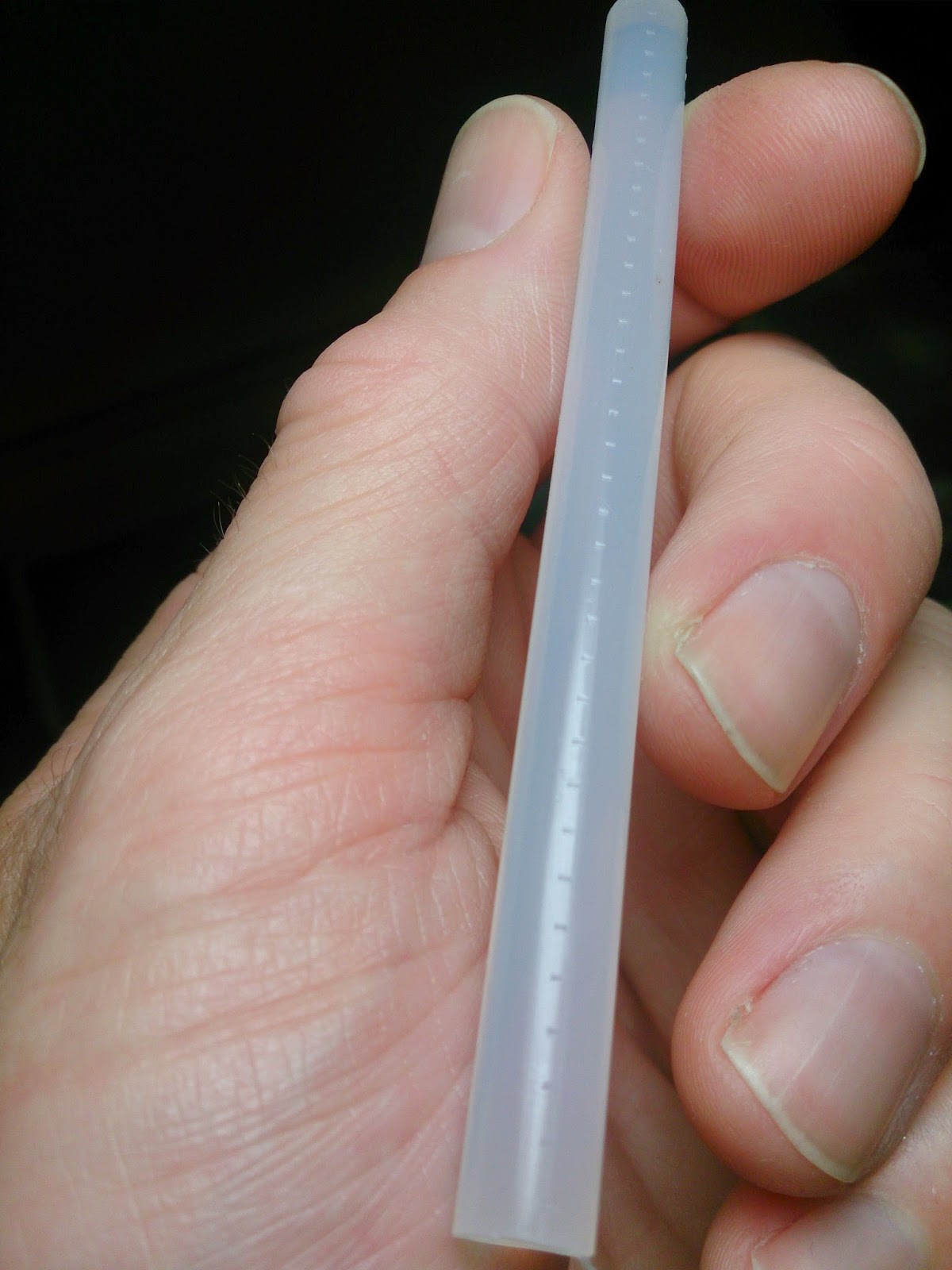 The angles were recorded on a piece of paper written weeks ago and carried around as a reminder of this project.