I had every intention of going to bed in a timely fashion last night. Then I got wrapped up in this project, enough that I worked up a sweat, then my sister called as I was wrapping up so I talked with her for the better part of an hour. All in all I allowed myself five whole hours of sleep. Yeee. But I woke up feeling like a million bucks because I had a good evening. I also found out that my sister's husband reads the blog so that's pretty awesome.

I’ve mentioned before that I try my best to use accessible materials when constructing projects so that other people can duplicate my results. Please be aware that when I call out a unique part that doesn’t mean it’s the only way to complete the project. I will try to mention easy alternatives from now on. If you try to replicate a project and cannot find a piece I’ve used there’s probably an alternative. Ask someone where you shop and you may find an even better solution or a cheaper one.

A quick couple of notes about wiring. I have a diploma for “Construction Electrician” so I have training and experience with wiring. Someday I’ll tell everyone the story of the first project I wired in college. ::sigh:: If you do not feel comfortable wiring a device ask for help. Never touch a wire that is electrified. The second note is an anecdote from those college days. My electrician teacher would identify amateurs who tried to do their electrical work by how much wire slack they afforded themselves in the boxes. Amateurs would only give themselves a few inches to conserve a couple precious inches of wire. Electricians would pull a generous amount of wire into the electrical box to give themselves enough to work with and to have some extra for the future. He charged stingy amateurs more because it was a hassle. Lesson: give yourself enough wire inside the box.

Shipping labels have been used for the templates when making holes but are not necessary. Masking tape could also be used or paper could be taped to the box or contact paper could be applied. Directly marking on the enclosure is risky because mistakes are not easily erased. Shipping labels are what happen to be stocked. One partial label, which had been cut for another project and had holes punched out for another, was applied to the side of the enclosure which will have the electrical coming in. The midpoint was marked on the label using the nearest ruler which happened to be a blue flexible curve ruler. It was marked approximately 1-1/2 inches from the bottom of the enclosure. 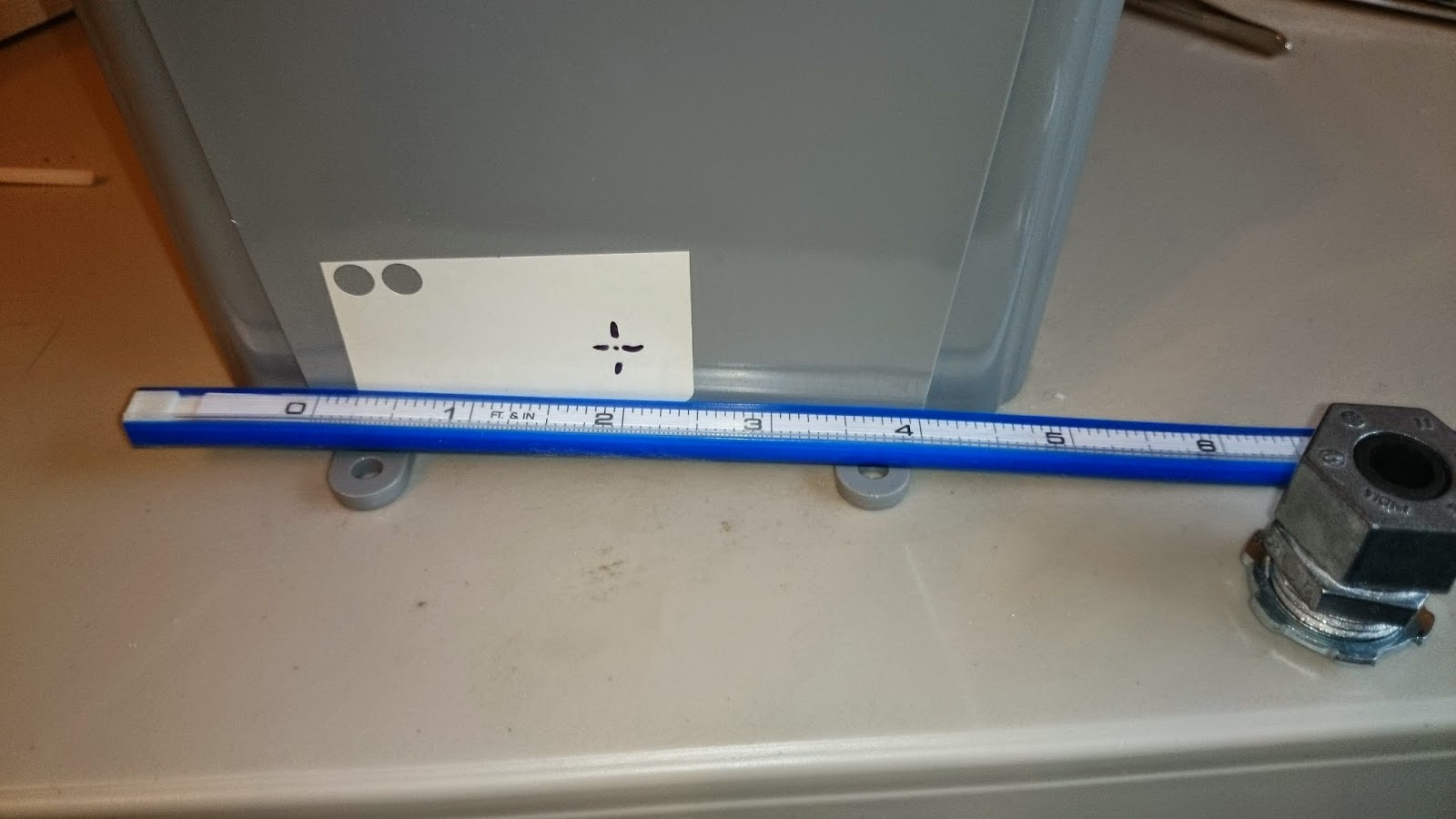 Mid point of the electrical enclosure


On the inside of the lid the receptacle was placed face down on the label used for marking and the area needed for mounting and wiring the receptacle was marked out. The region was squared off as the cut-away region. To make cutting easier marks were made ¼ inch from each edge. Lines were drawn to connect the marks so a smaller rectangle was drawn inside the cut-away region. The purpose was to use a large drill bit to make the corners and cut away the sides so a rounded-edge rectangle would be the result. All the marked holes were pilot drilled. 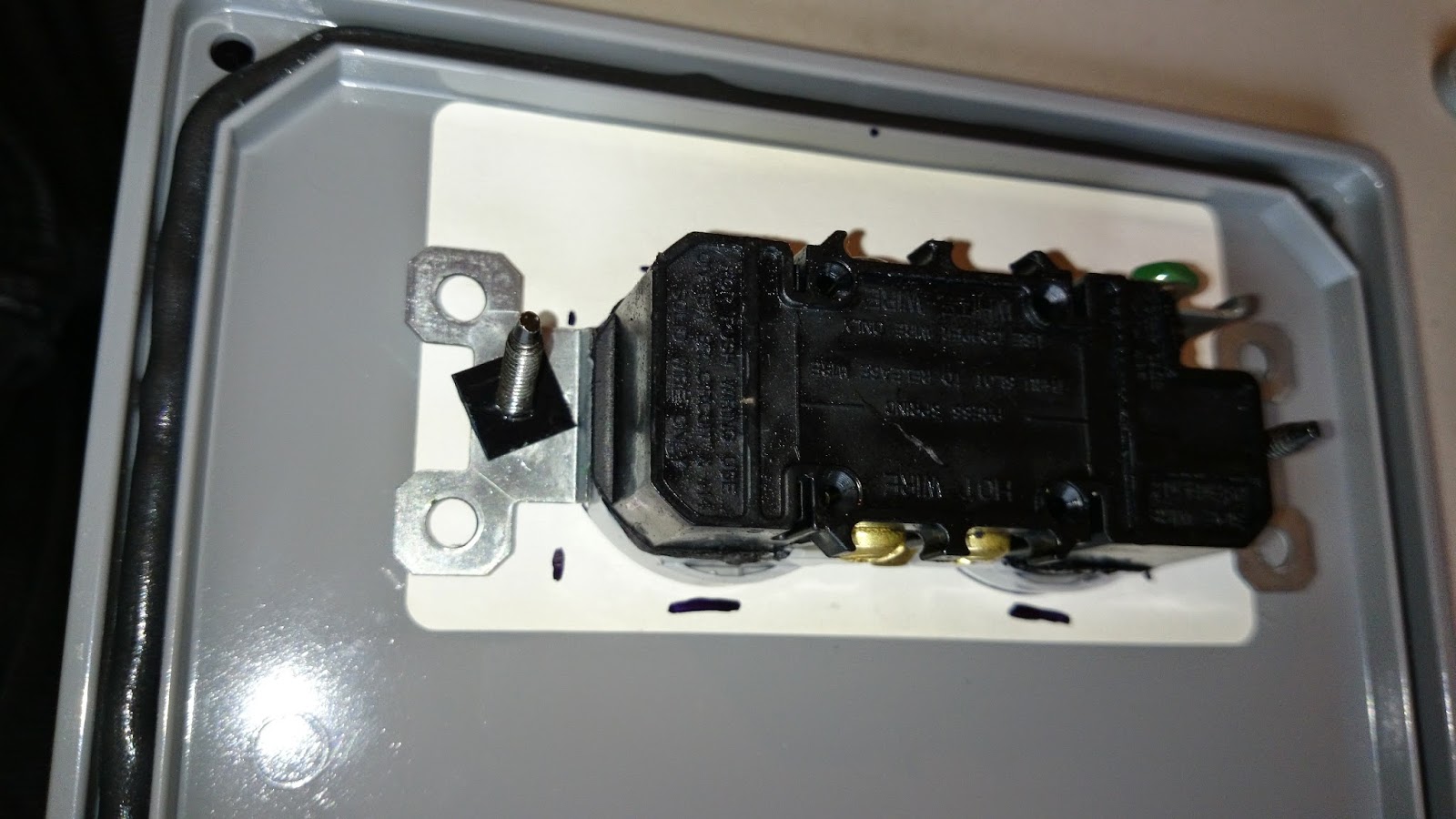 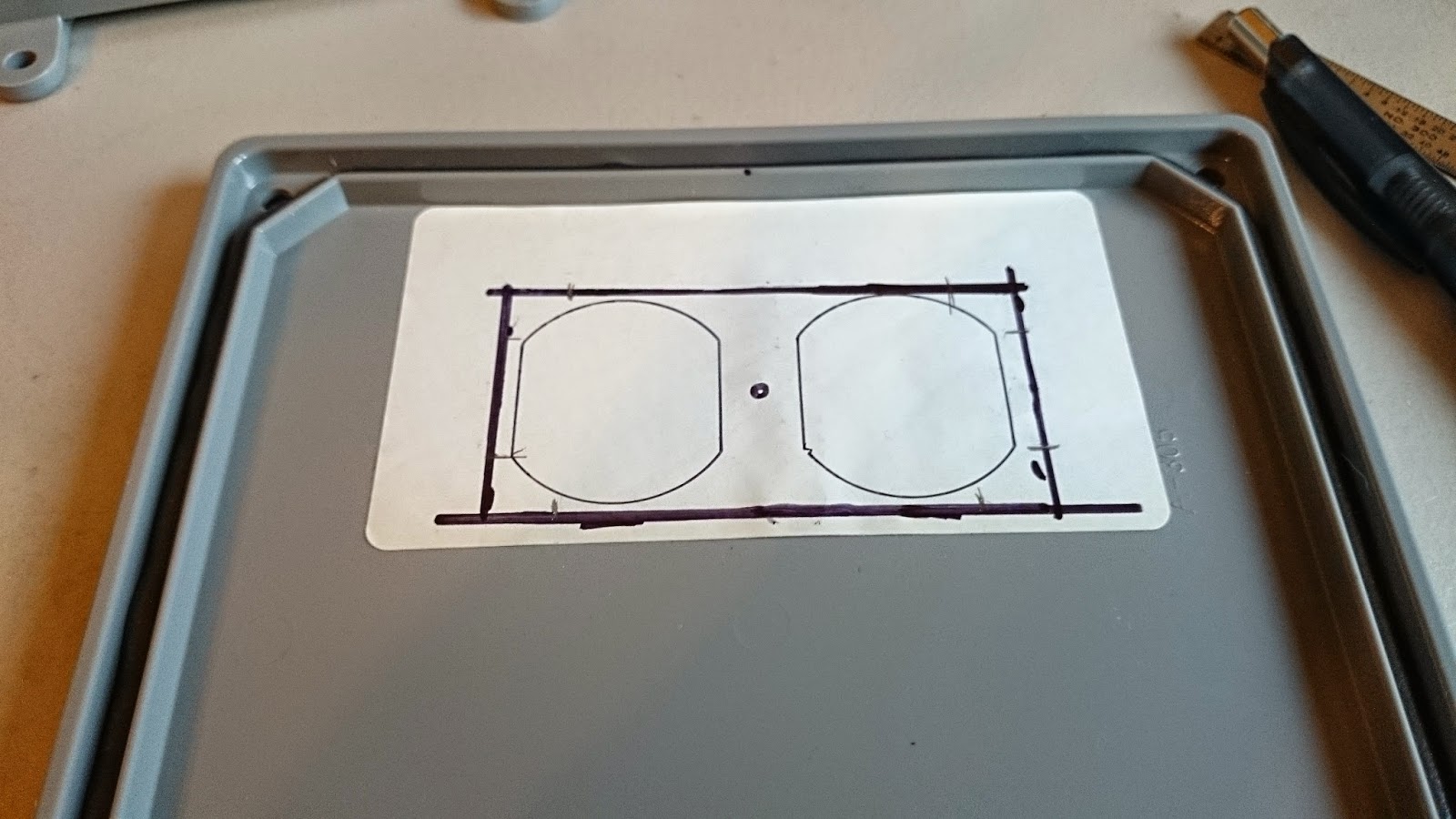 Marks 1/4 inches from each side 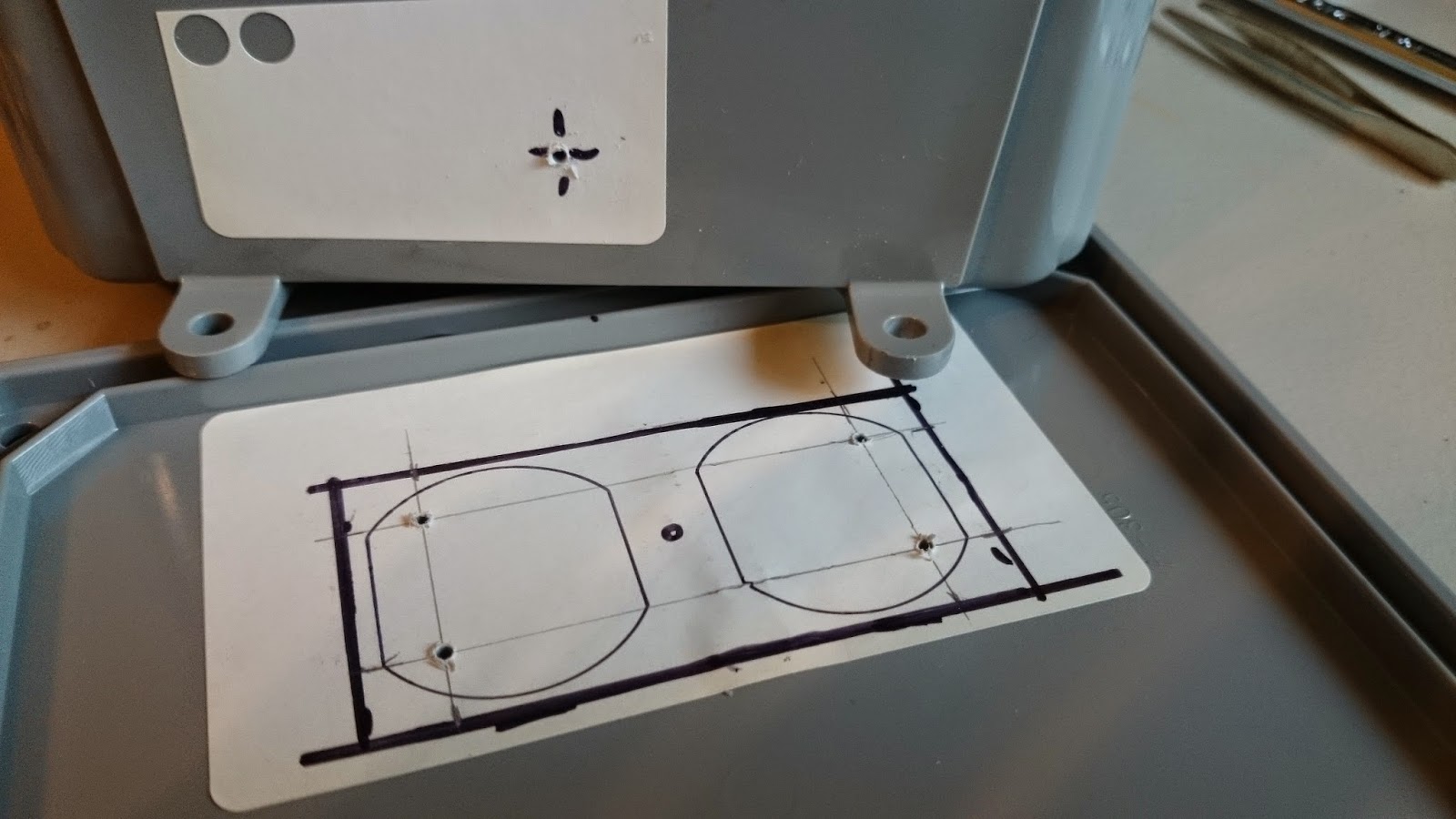 Smaller rectangle inside the cut-away region and the pilot holes

An old computer IEC power cord was chosen from a scrap box to supply power to the controller. The proprietary end was cut away and the sheathing was stripped back a few inches. The wire ends were stripped and twisted to reduce fraying. 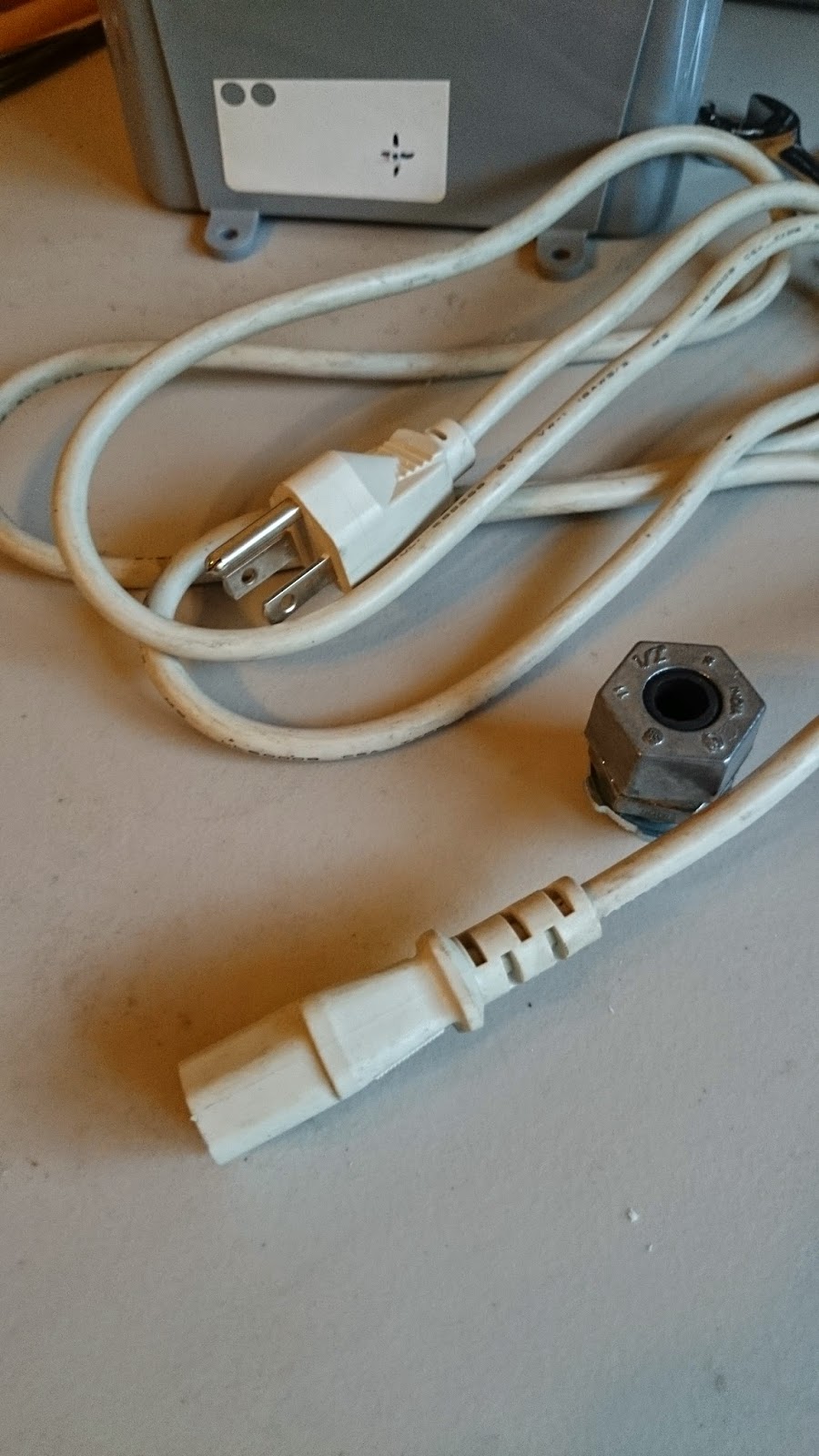 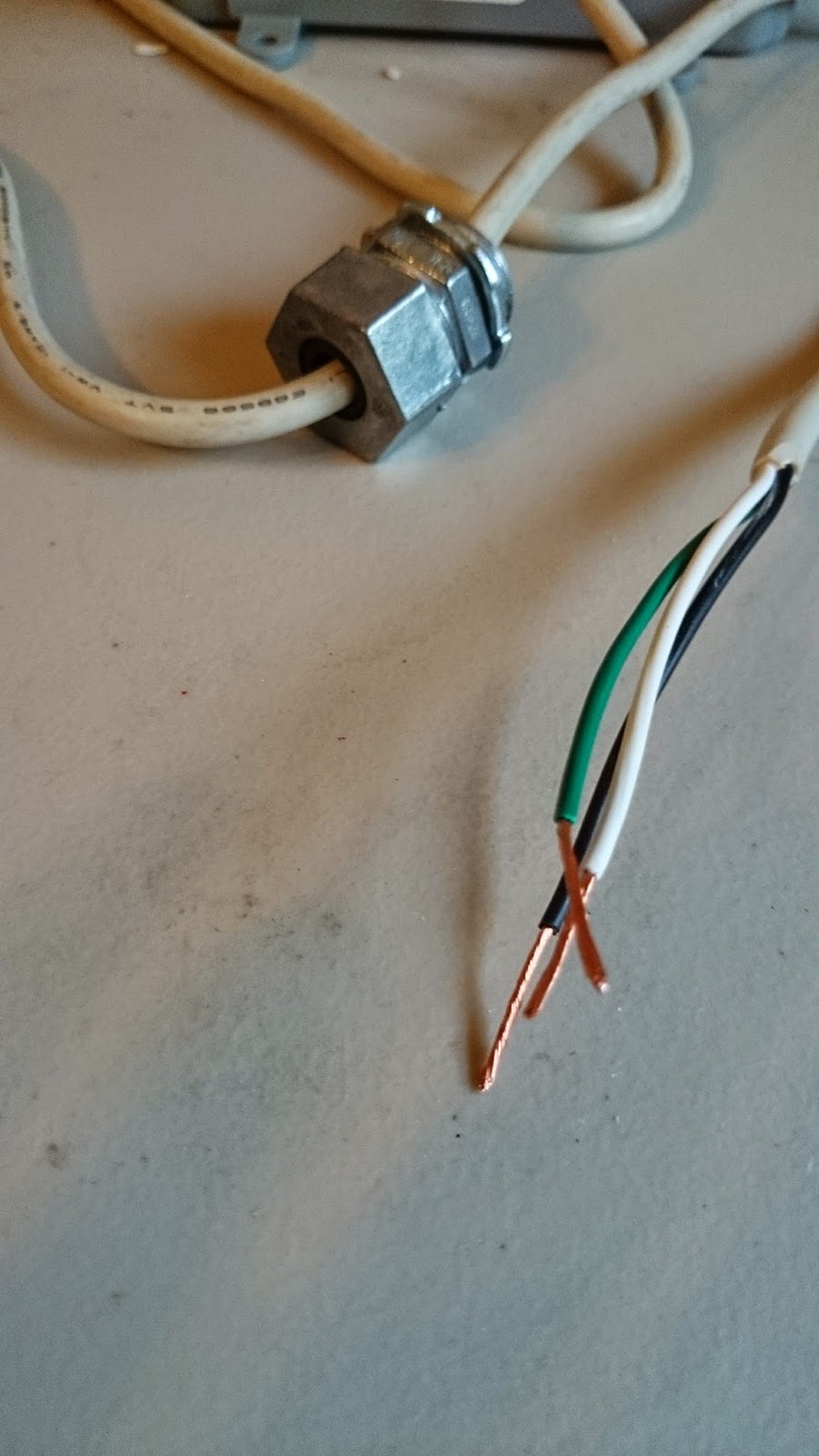 Twisted wire ends and the cord tight connector on the cord 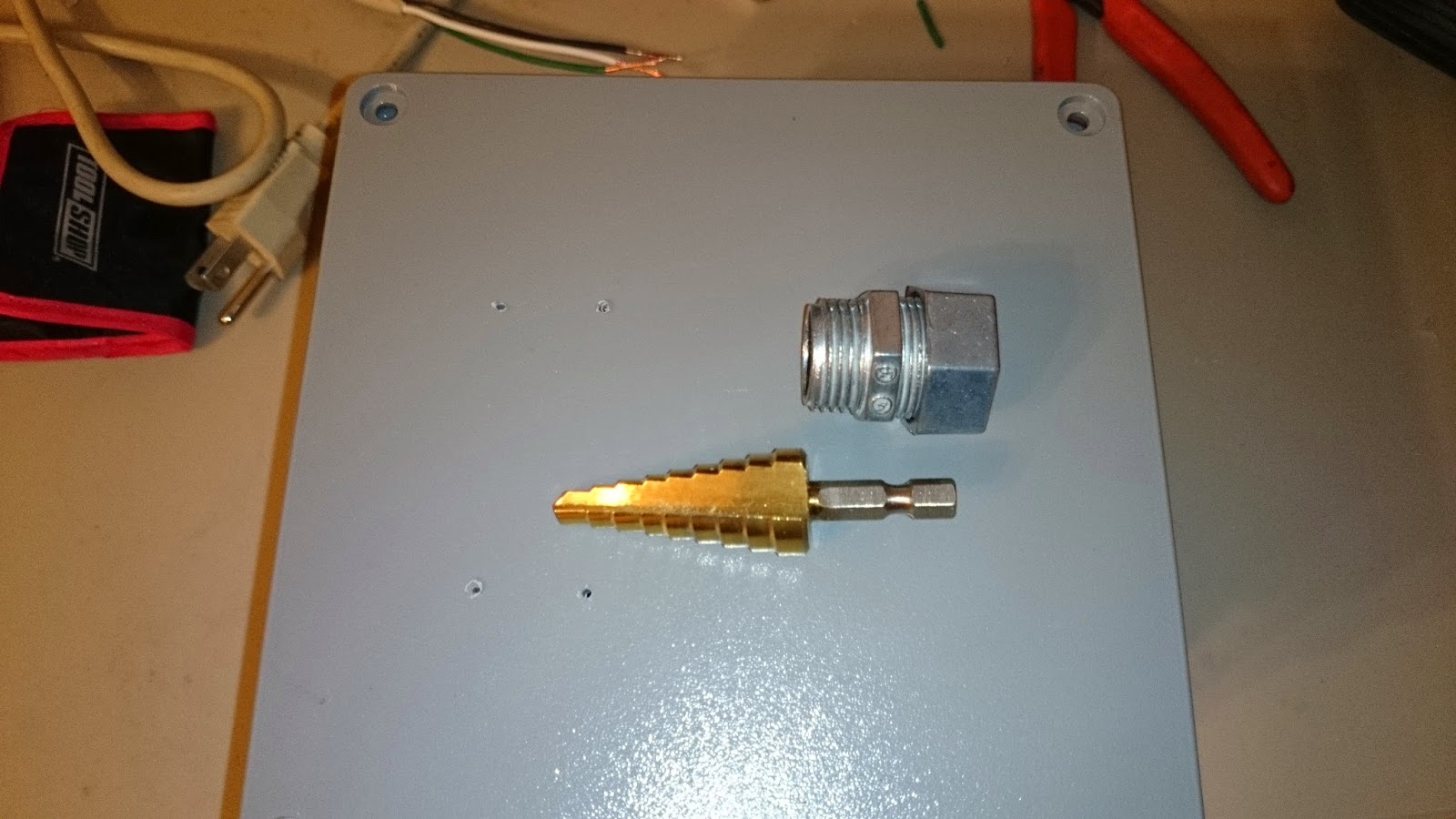 Step bit used to drill the pilot holes on the lid 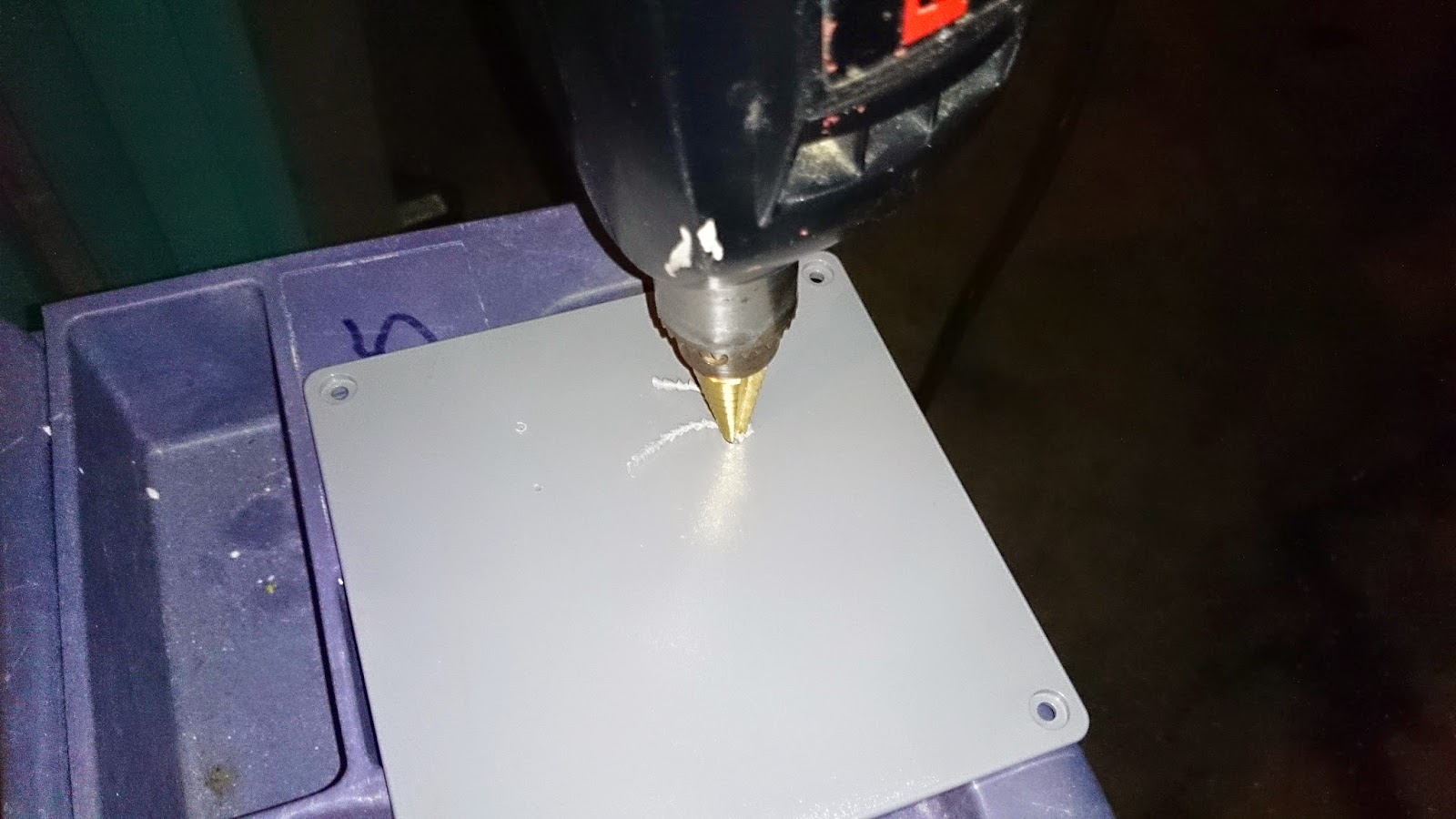 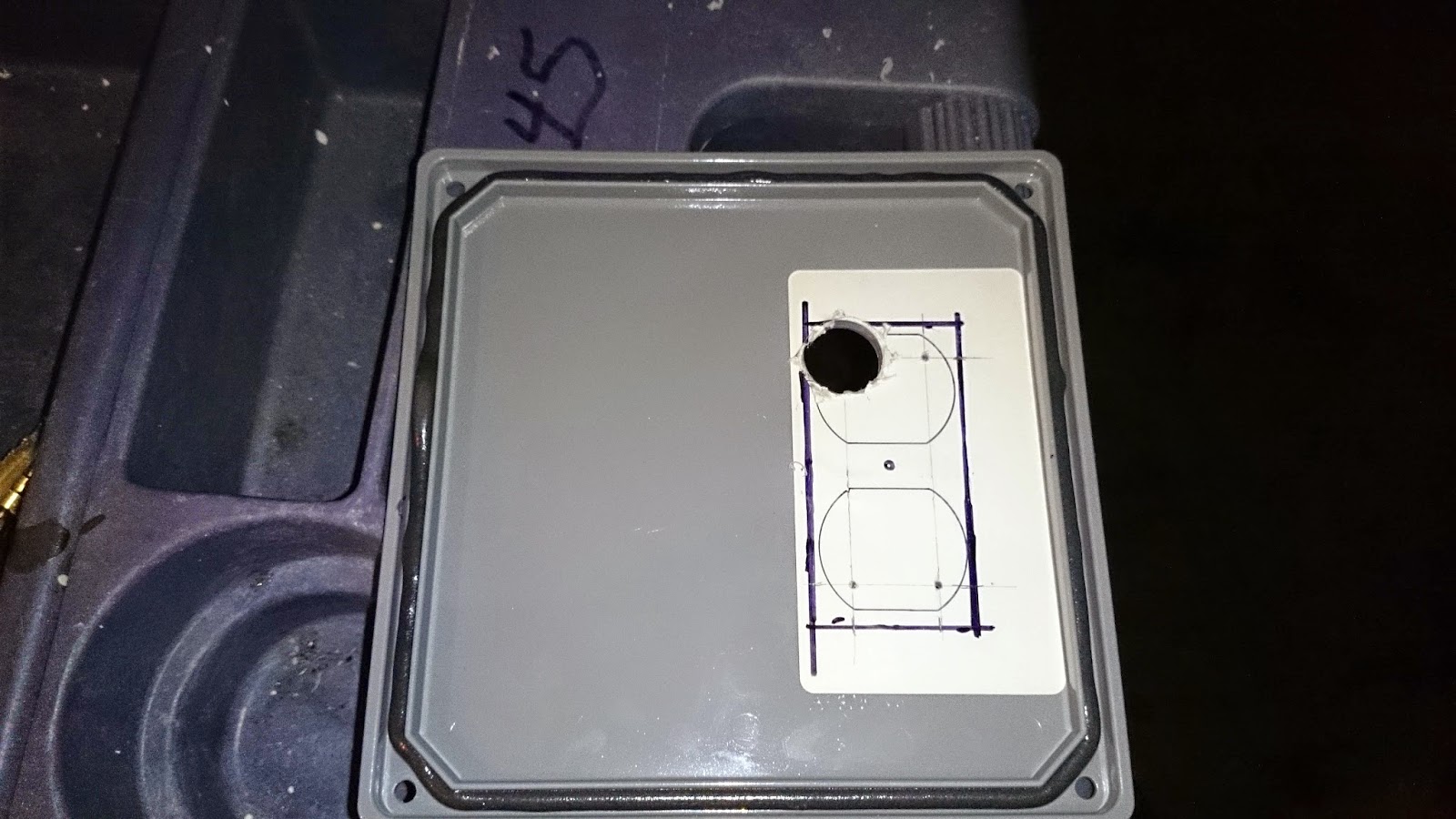 Resulting hole which matches up with the cut-away region 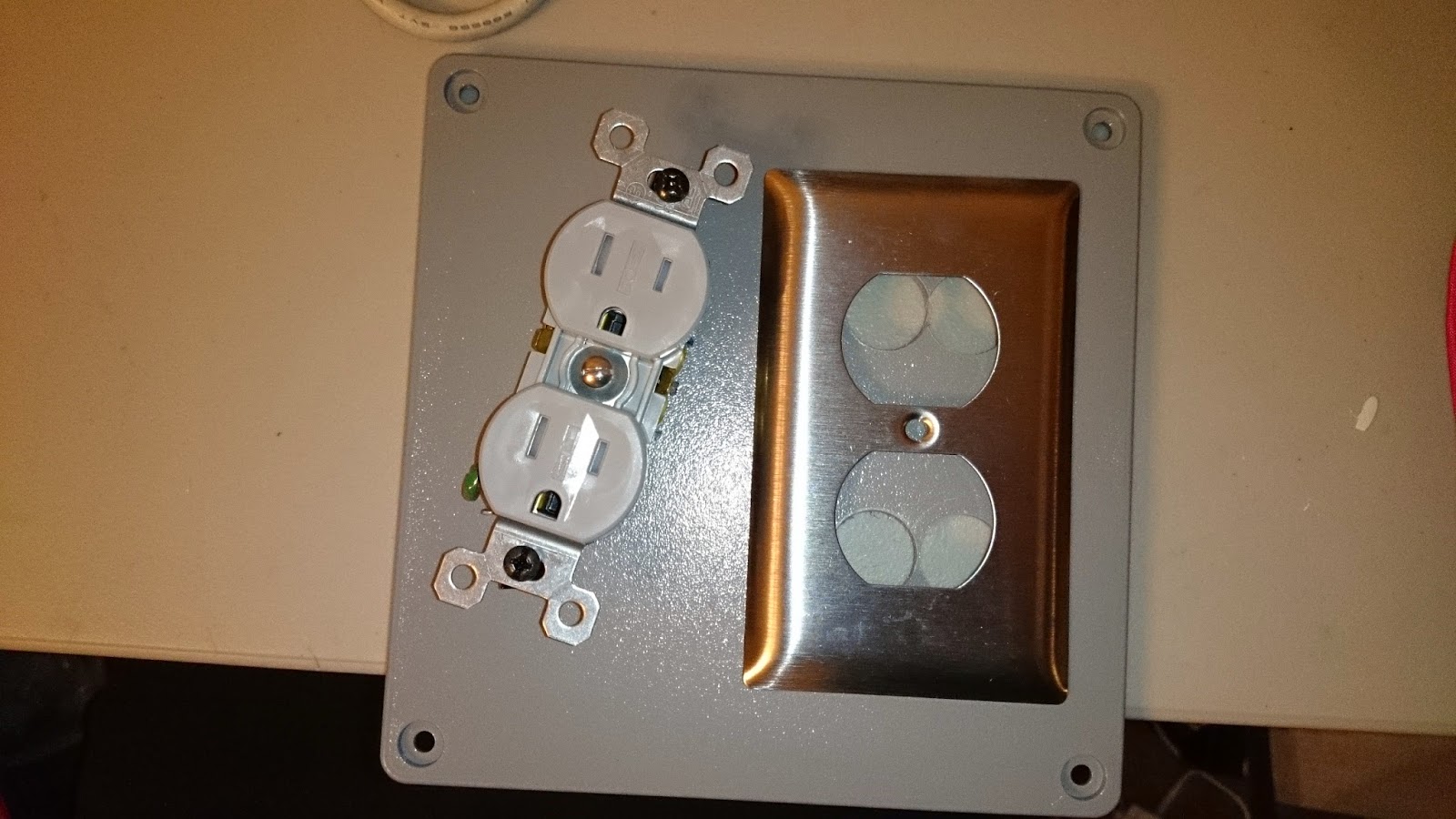 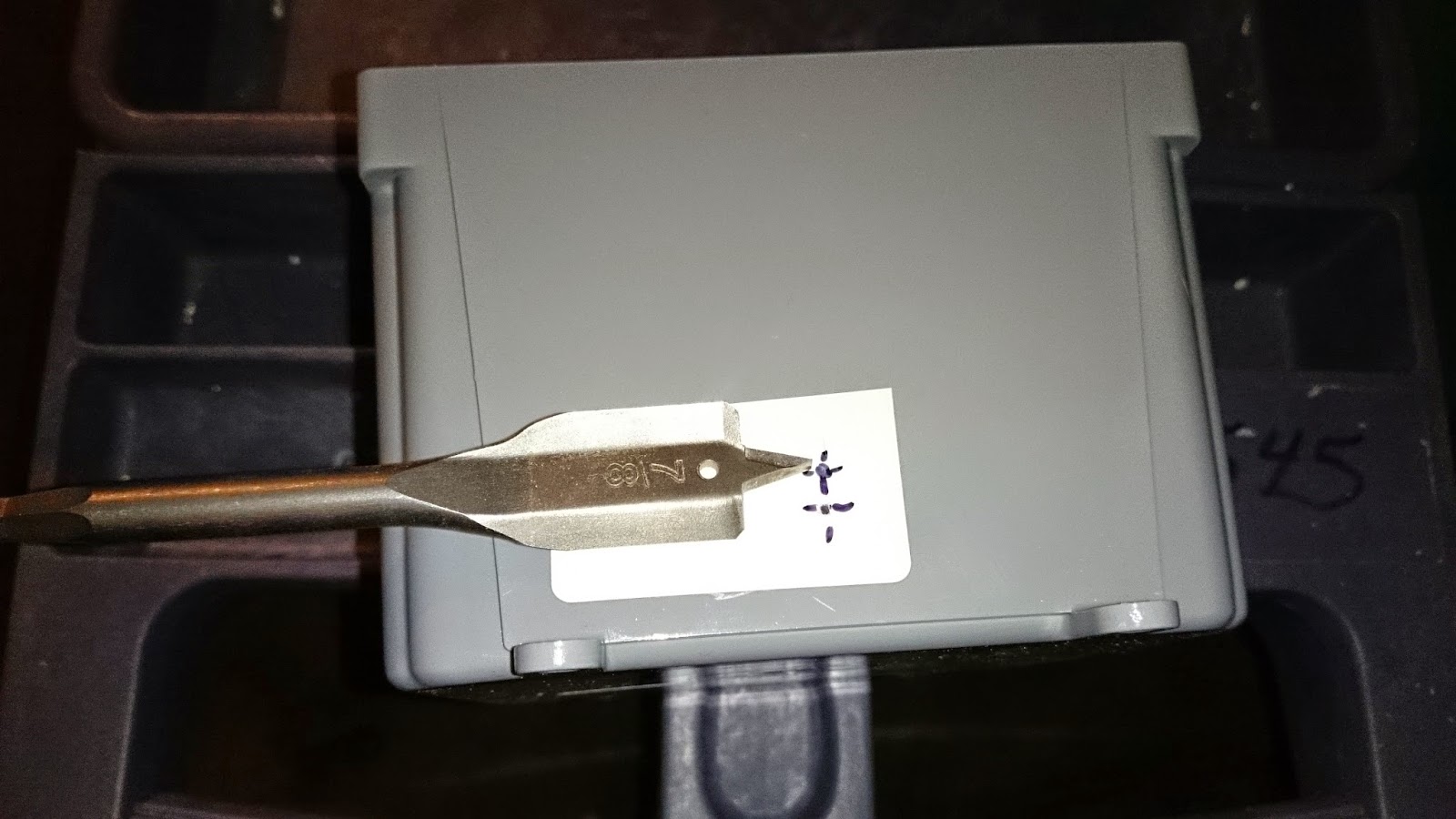 7/8 inches spade drill bit. The hole will be drilled approximately 1-1/2 inches from the bottom 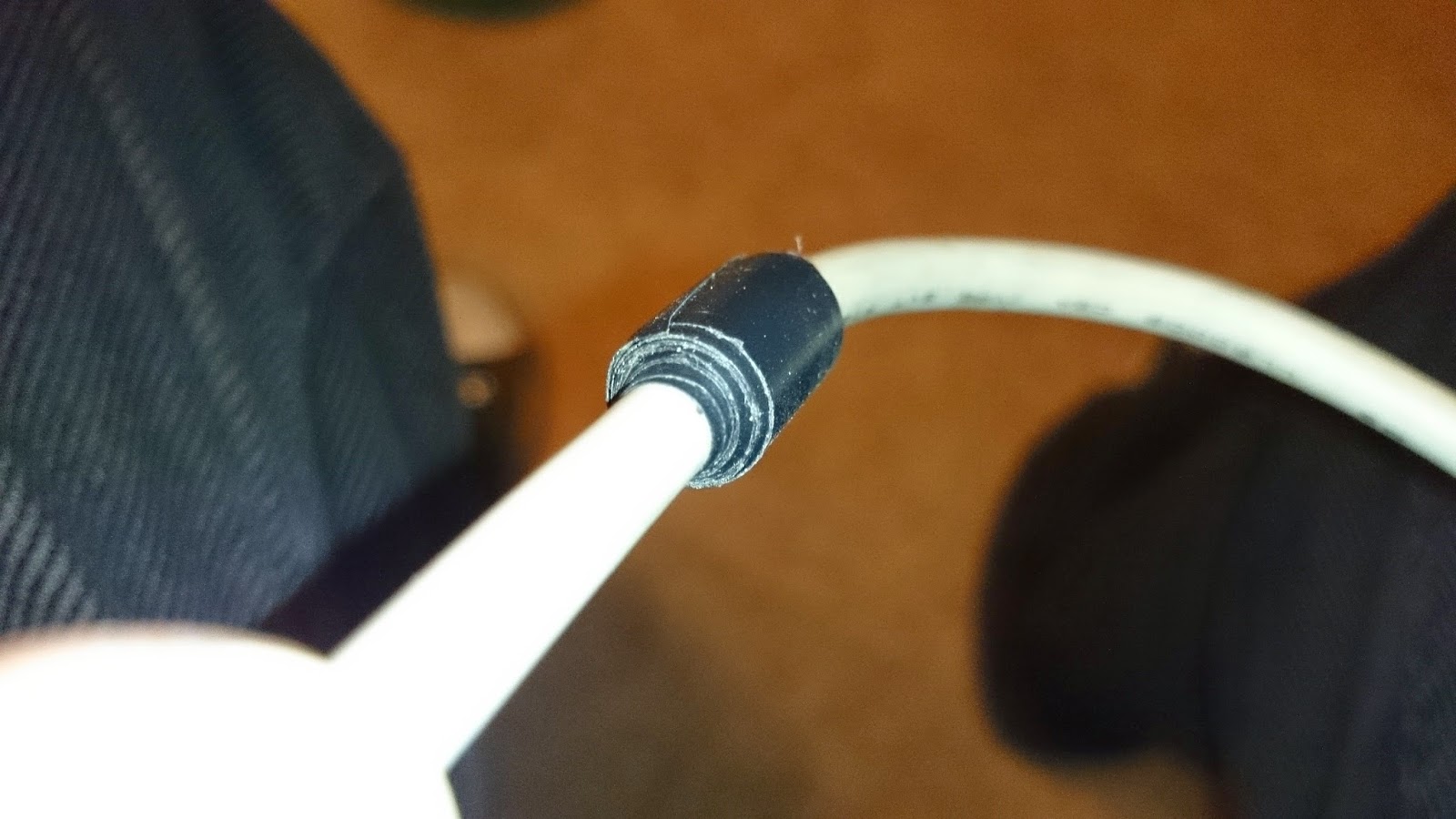 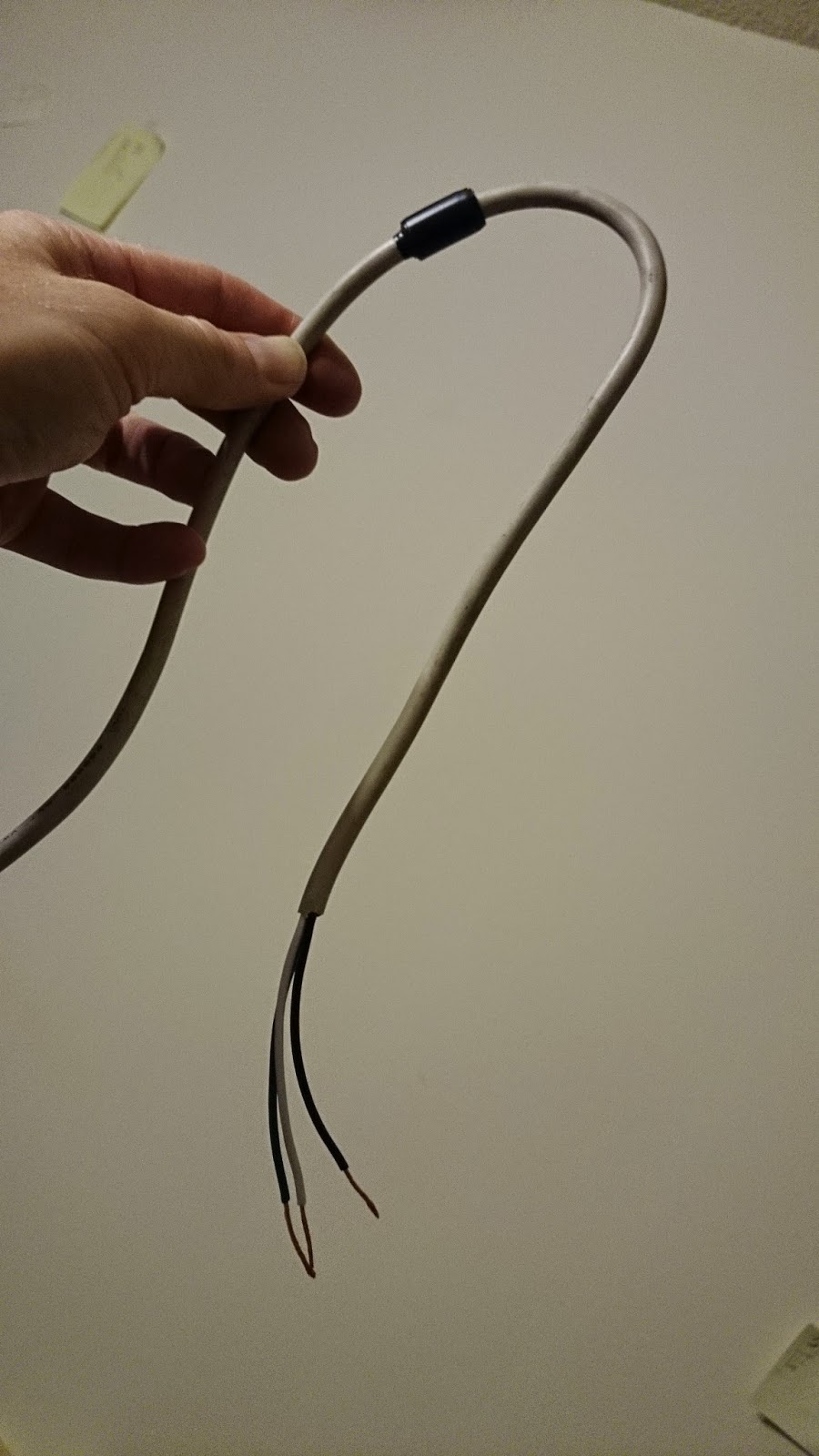 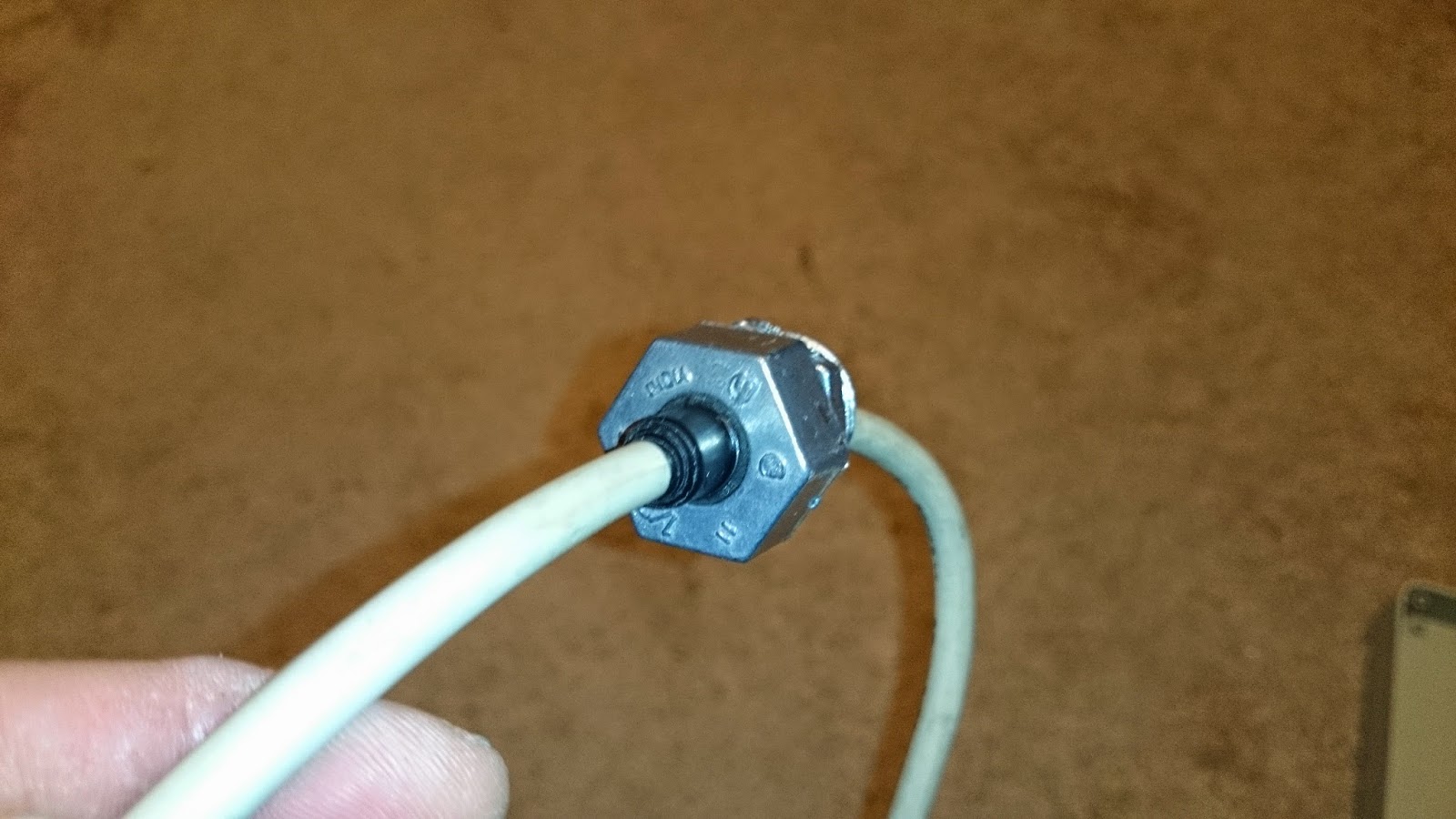 Inside and outside view of the electrical box

Duplex receptacles have their outlets linked by default. To undo this link a tab on the power side of the receptacle is removed. The power uses darker color bolts than the common side. The common side is sometimes called “return” or “neutral.” Often one set of bolts is silver while the other set is brass colored. Sometimes the power side is painted black. The darker set should have the tab removed. The purpose is that only one of the outlets will be controlled by the temperature controller while the other outlet will be constantly hot so it can be used for other kitchen implements as an extension cord. The other reason is there should not be a time when controlling a second oven would be useful since there is only one temperature probe. This also reduce the annoyance of tying up valuable kitchen receptacles. 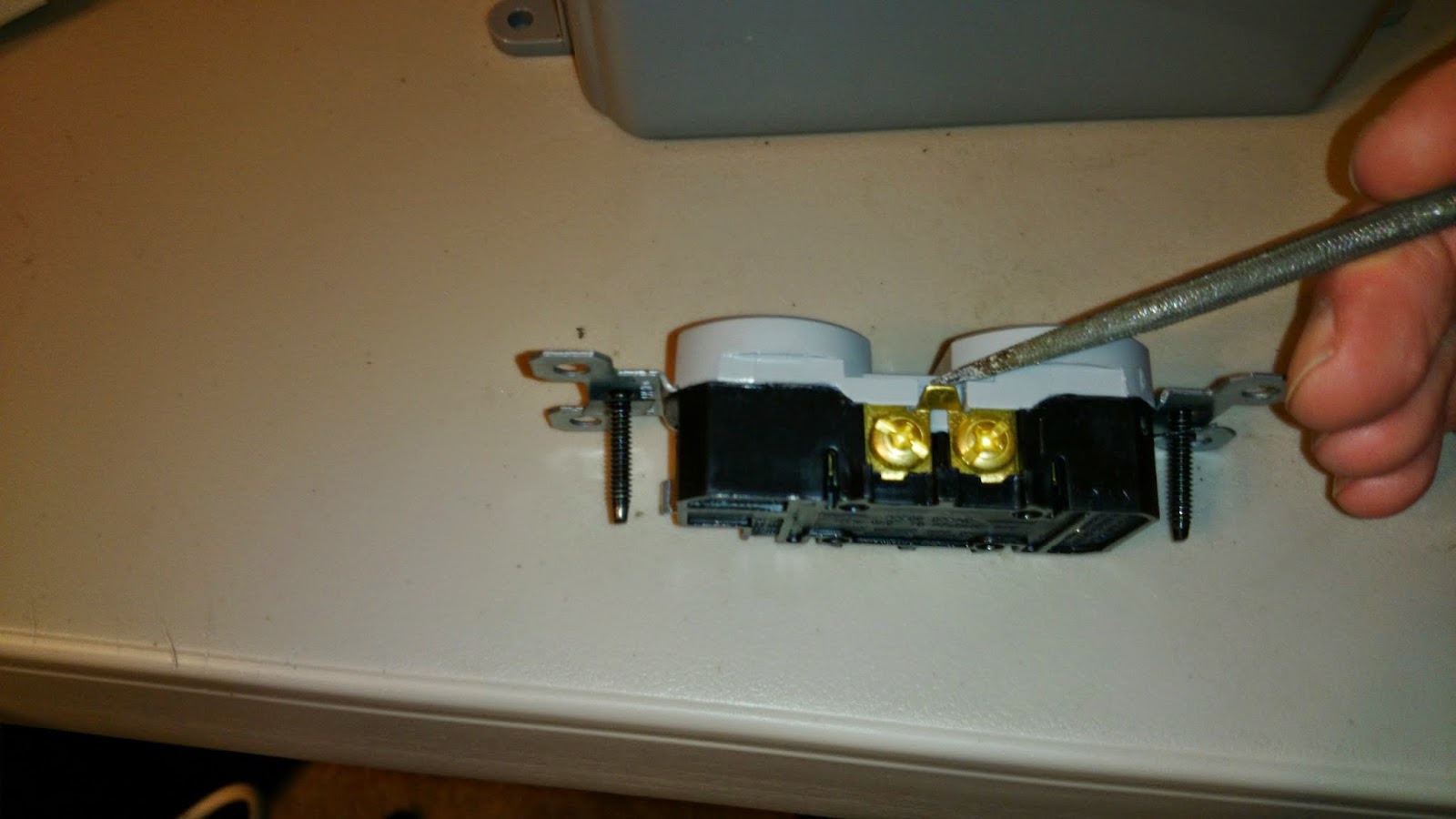 The power side brass-colored bolts 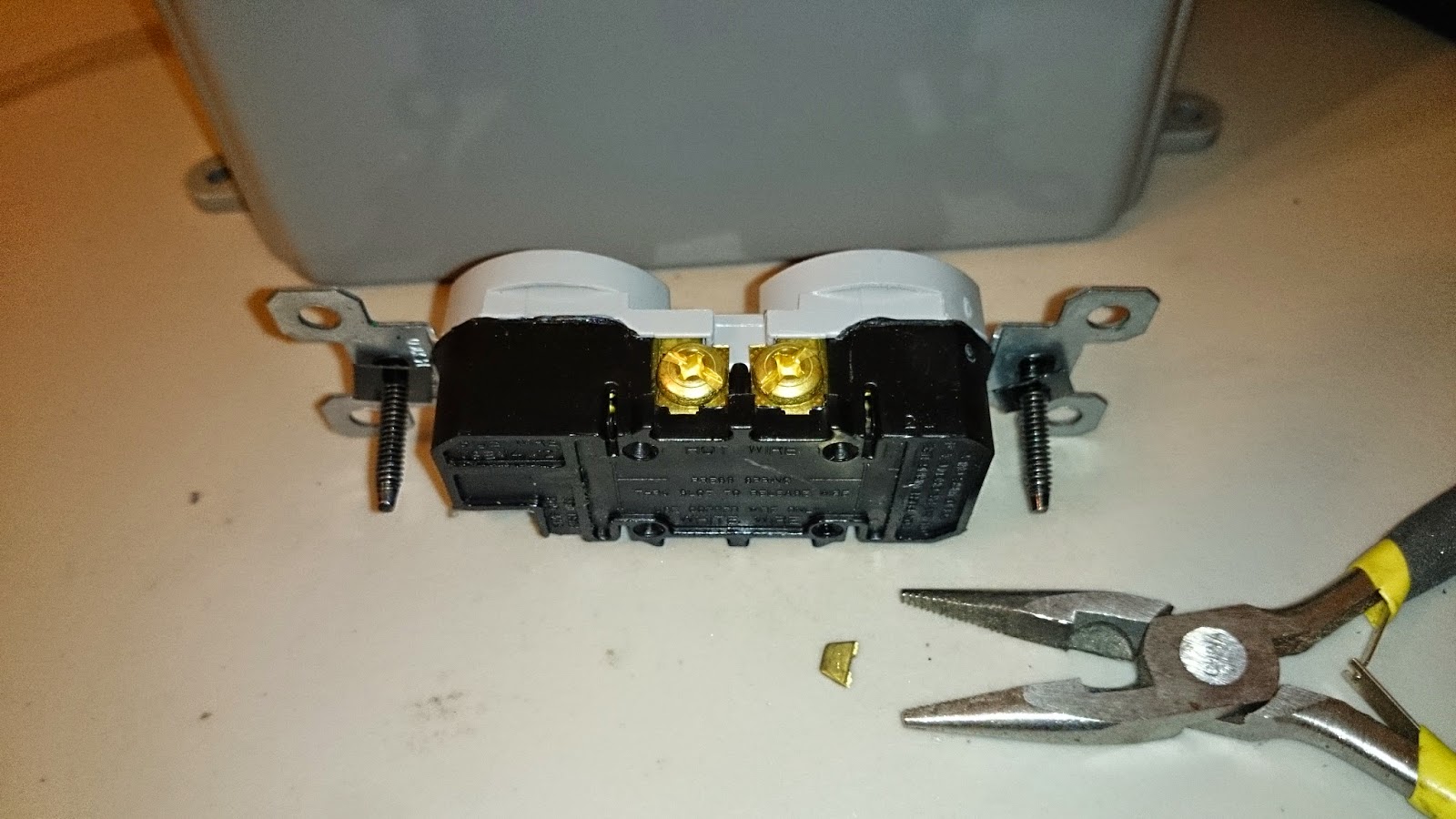 The tab was removed with a pair of pliers

-IMPORANT- Since this is meant for a water-containing vessel it is imperative that only a Ground Fault Circuit Interrupted (GFCI) power source be used. These are in line with the electrical code for kitchens and wet bars. A GFCI receptacle may be used in place of the receptacle shown in this project. 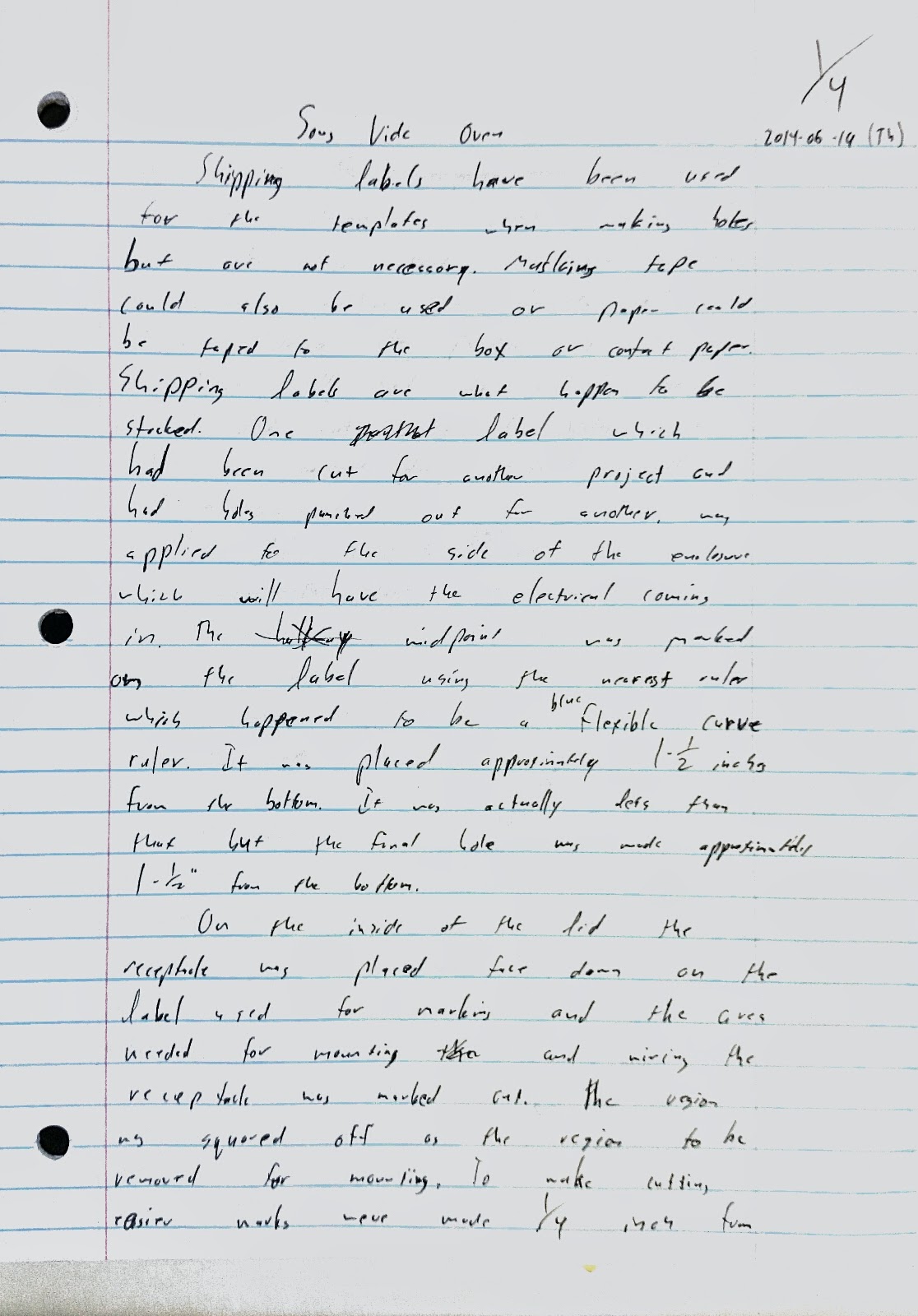 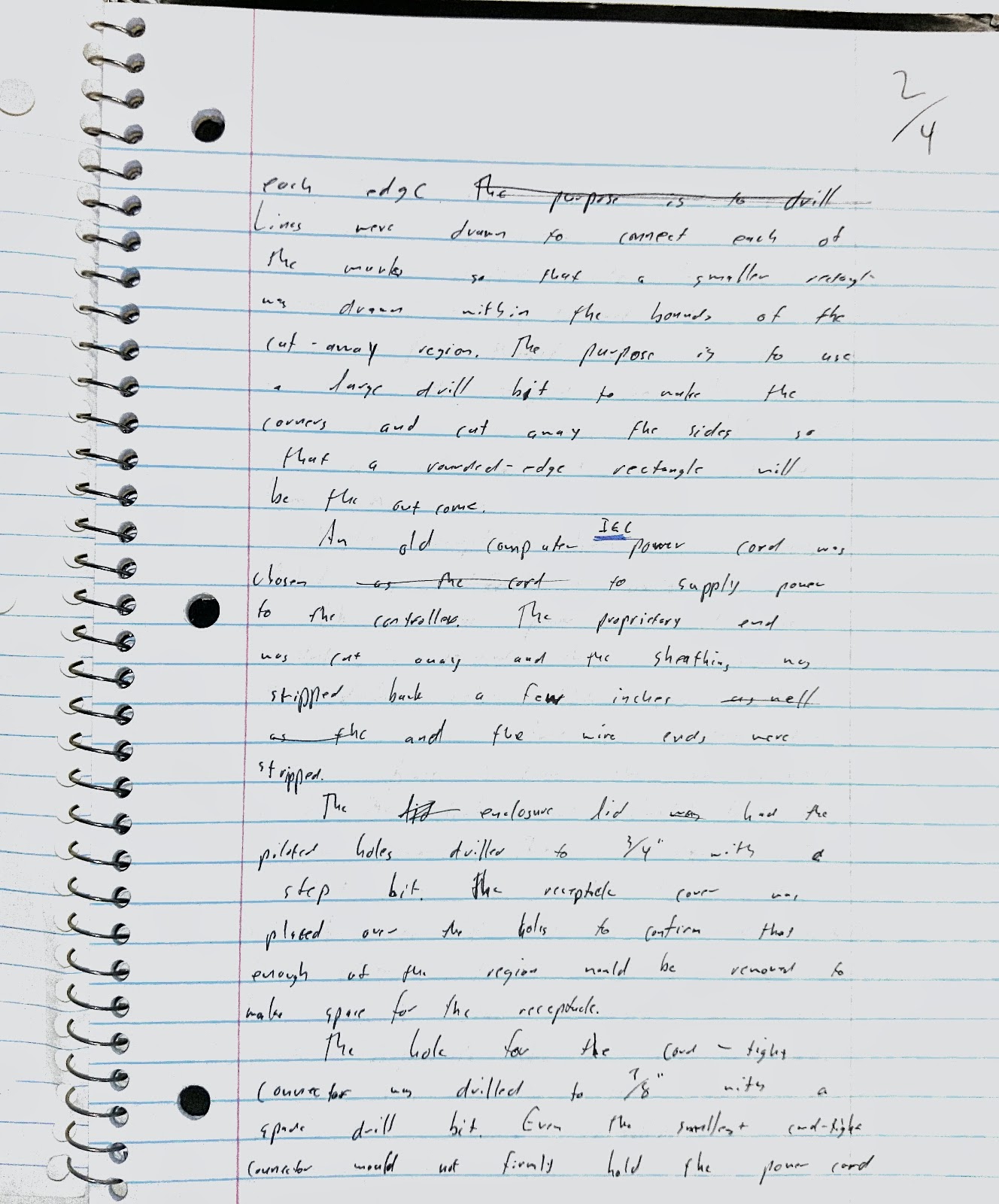 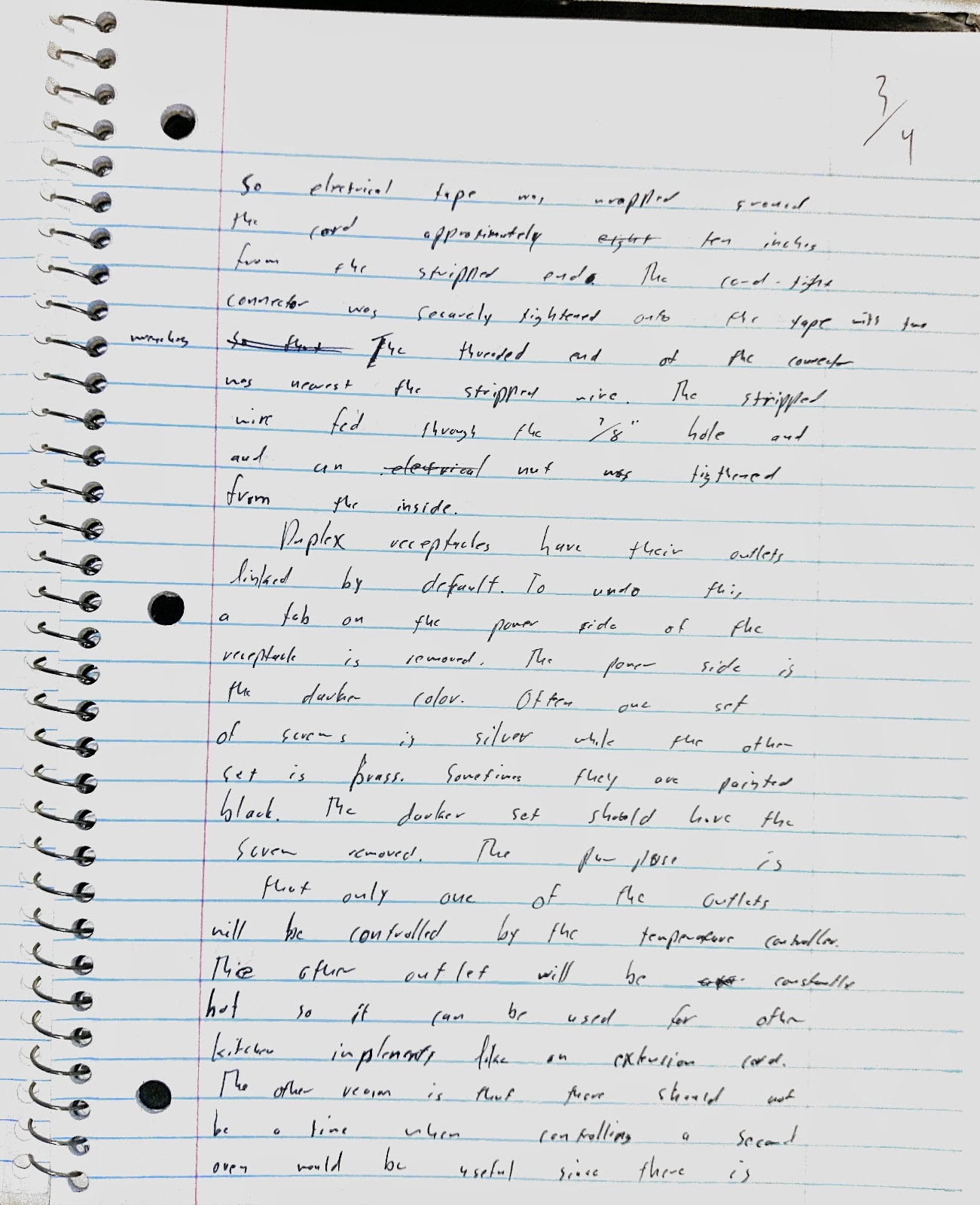 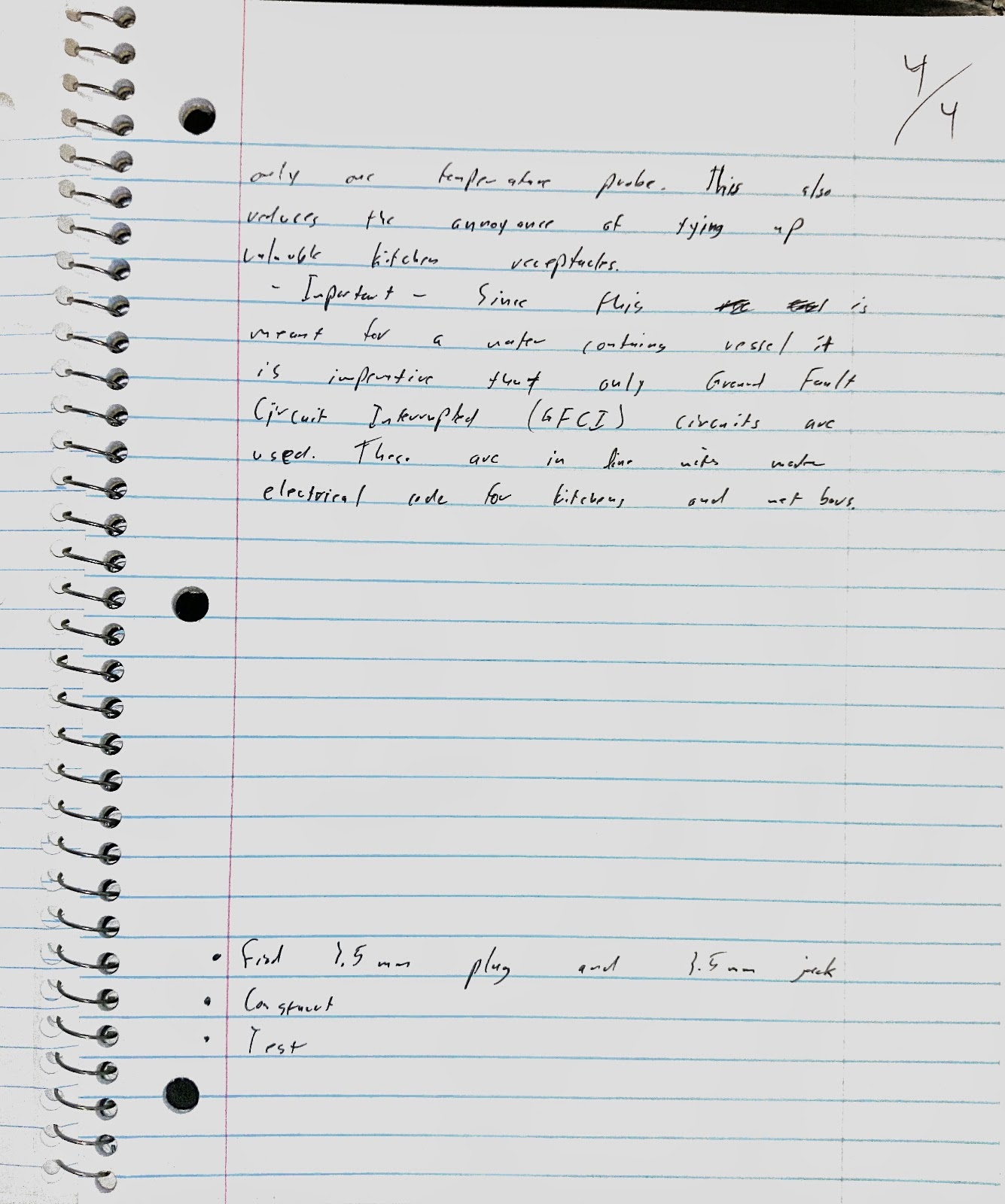