June 08, 2014
Thank you to everyone who has supported this blog! This is my 100th blog post because Post 0 doesn't count. I'm so excited that people read it and they talk to me about it when they see me in real life. It's time that I mention something important, the law.

The things I post on here are open source. If you copy them I'm not going to chase you with lawyers. I may chase you with a camera to see how you did things but rest assured, the only thing copyrighted on this blog is the words themselves. My ideas are here for all to process on their own. This is not to say that I don't have projects which are closed-source.

I will try to write a legal-sounding disclaimer but here's the gist. If you tell me about an idea you have, I may share it. The tricky part is if we discuss something I'm working on which I intend to capitalize on. Don't send me valuable ideas unless you want to give them up. If you want to hire me as a consultant I'll sign a non-disclosure agreement and we can talk about anything you want.

I don't want to be a big-fat-meanie-head but I also don't want to get sued because someone claimed he or she shared that idea in an email before I capitalized on it. Same goes for comments, if you post something, you're posting it to the web, it's there for all to see. If someone recommends an improvement and I implement it, she or he doesn't get to ask me for money. The best I can offer you is credit where credit is due and my thanks.

This shouldn’t be any more restrictive than the way it was before but now there’s some legal-sounding words to cover my back.

A new spinner was assembled using a #4 brass bolt and a nylon spacer. The previous bolt was ferrous which was likely attenuating the spinner's effectiveness. This phenomena was noticed while the magnetic supplies for the is project were being stored in a box and tweezers accidentally became attached to the outside of the box. The finger magnet reacted much less noticeably to the magnetic supplies. It was previously assumed that a ferrous bolt would not have an effect on the spinner since it would travel with the spinner. This may be true but a non-ferrous spinner eliminates the controversy. 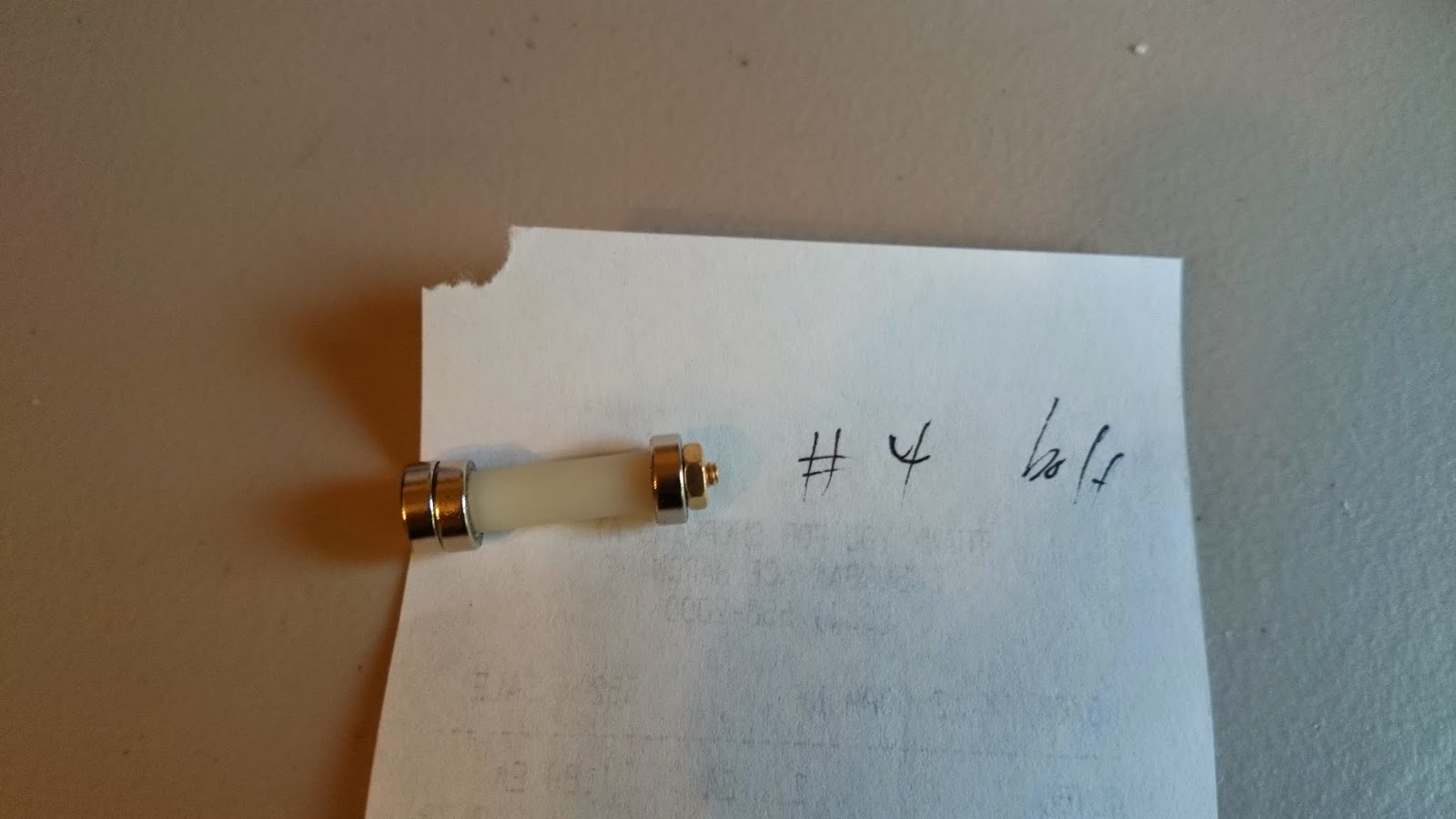 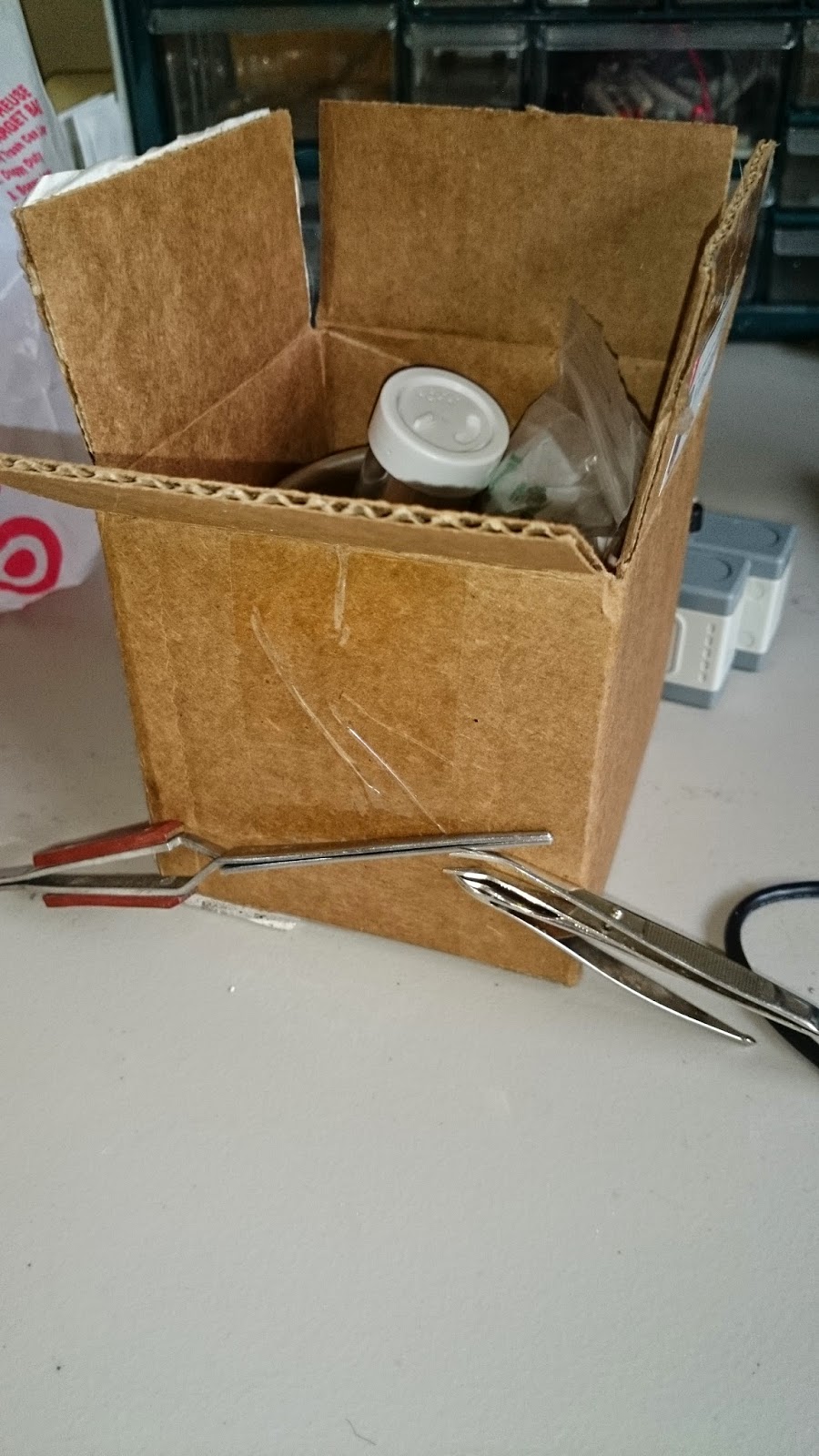 The new spinner was roughly balanced on the frame. Divots were made in the nylon spacer by tightening the brass bolts onto it. The bolts were also heated to depend the divots but that technique was abandoned. The spinner would spin freely but there appear to be a slight inconsistency since the spinner stick in a certain direction. The spinner is not perfectly balanced. 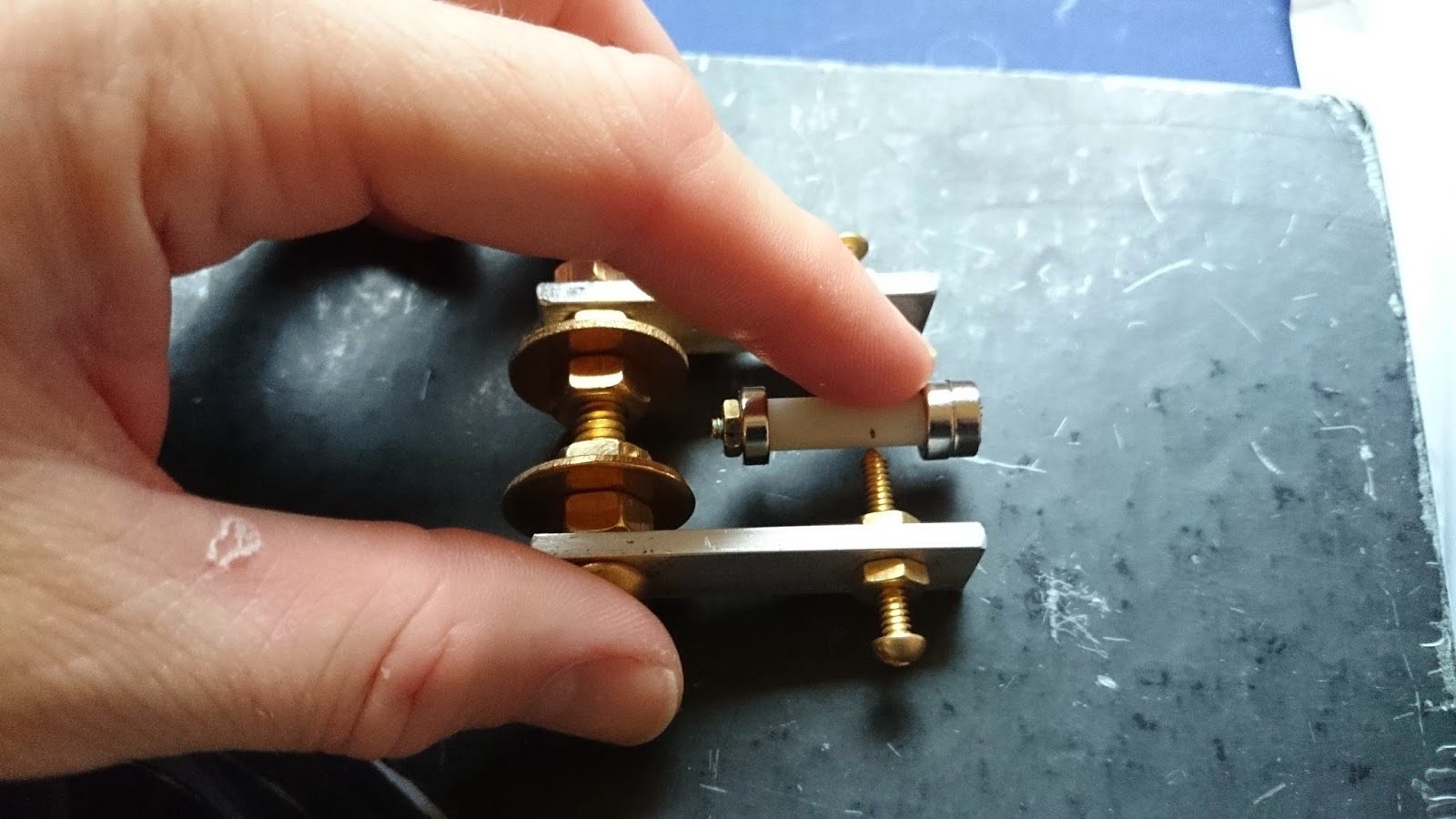 Finding the balance point of the spinner 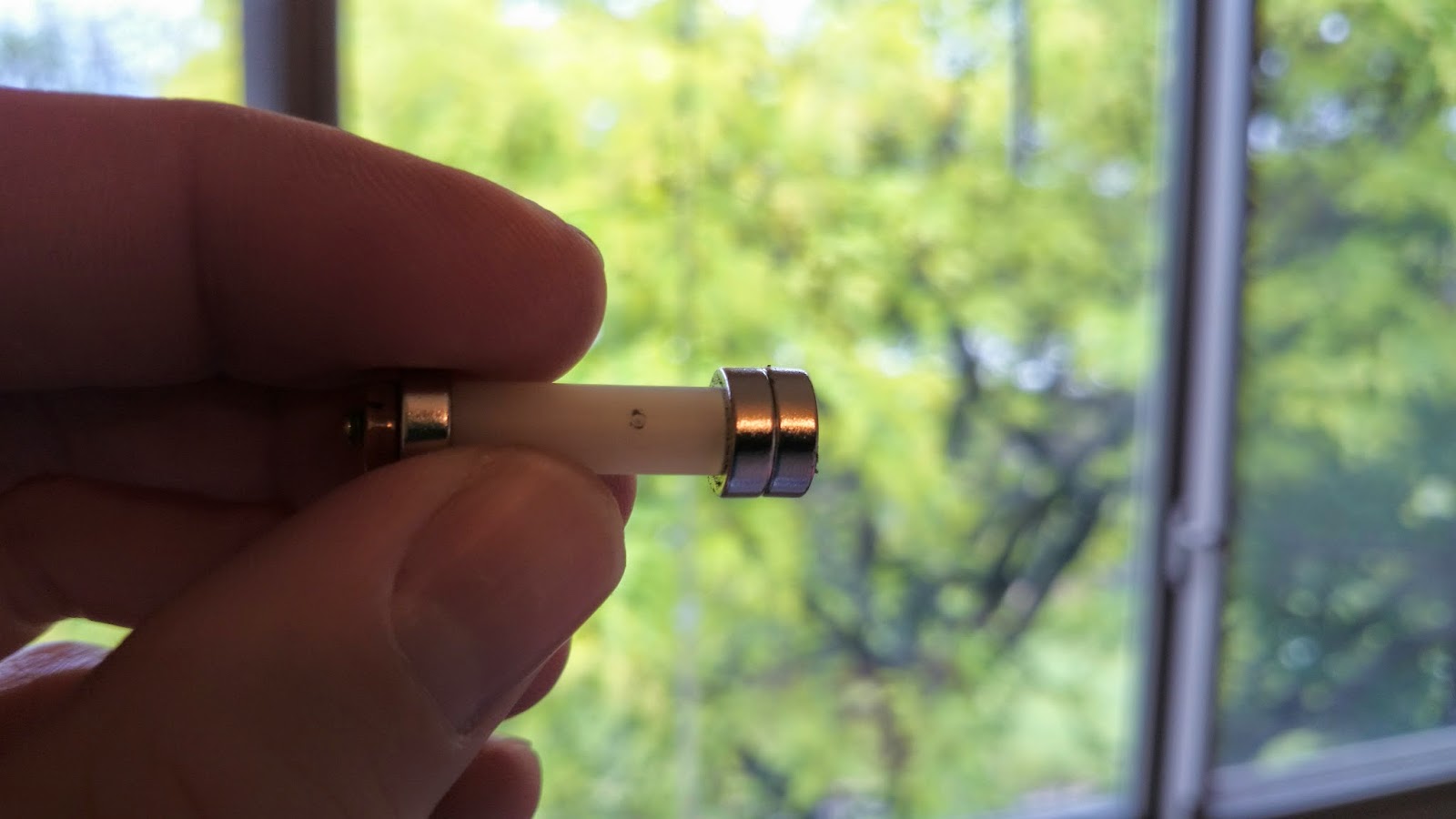 Divots made into nylon

Another idea was sketched which uses  whisker to tap on an internal bump This design relies on a spinner which doesn't wobble. It would use a springy whisker to tap the bump and send the vibration through the whole frame. 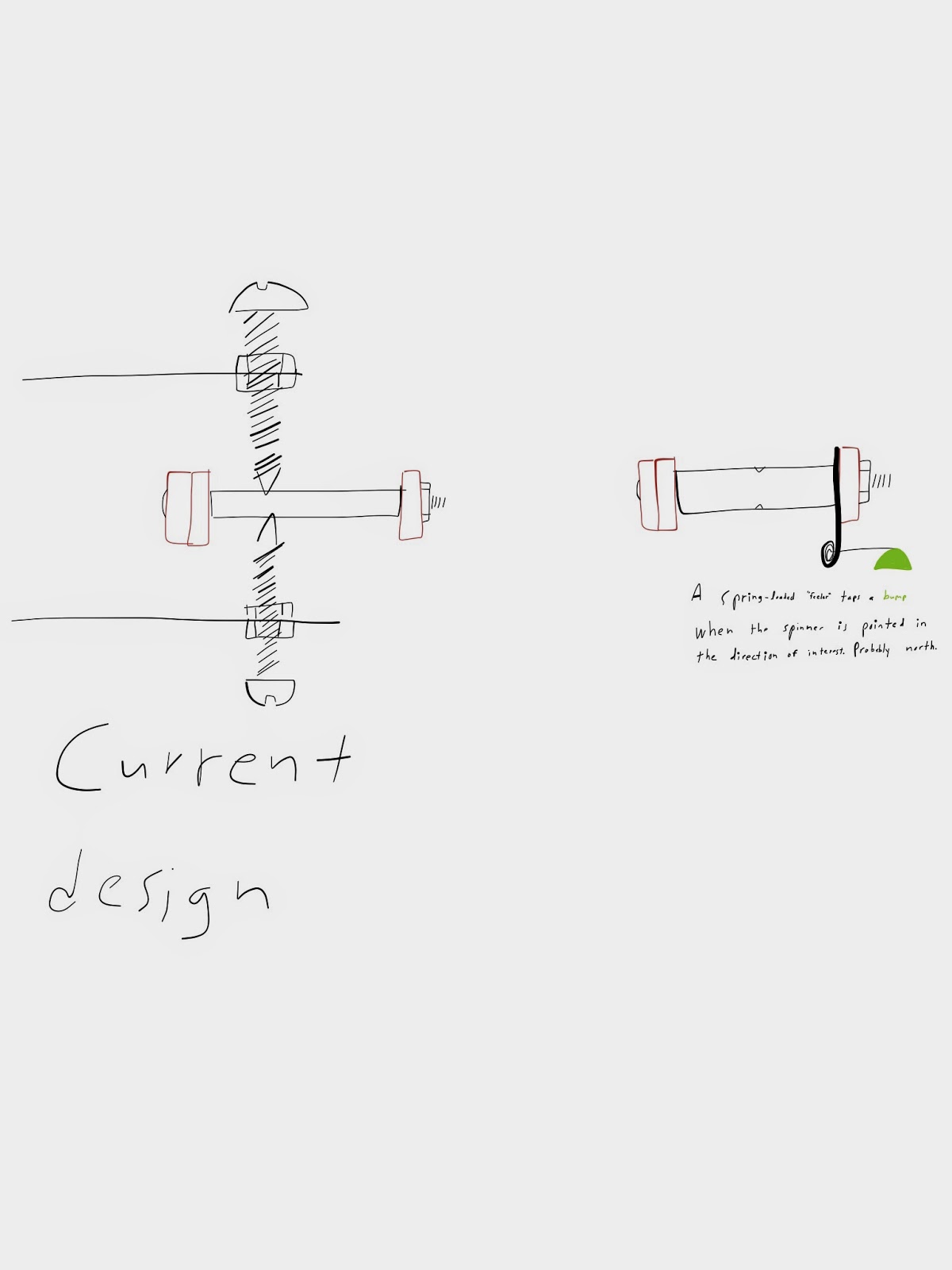