December 14, 2014
This week I earned the moniker 23 Hour Engineer. On Wednesday I stopped posting until today because of a big project at work. I mean big in every sense of the word. I make band saws and this project was a band saw that is too tall to fit in my living room and more expensive than any car I have ever owned. Or will ever own. On Wednesday I showed up at the regular time, maybe a little early, and worked for 23 continuous hours minus a lunch break where I mostly stared at a cubicle wall and talked about anything BUT bandsaws. Maybe this won't happen again. 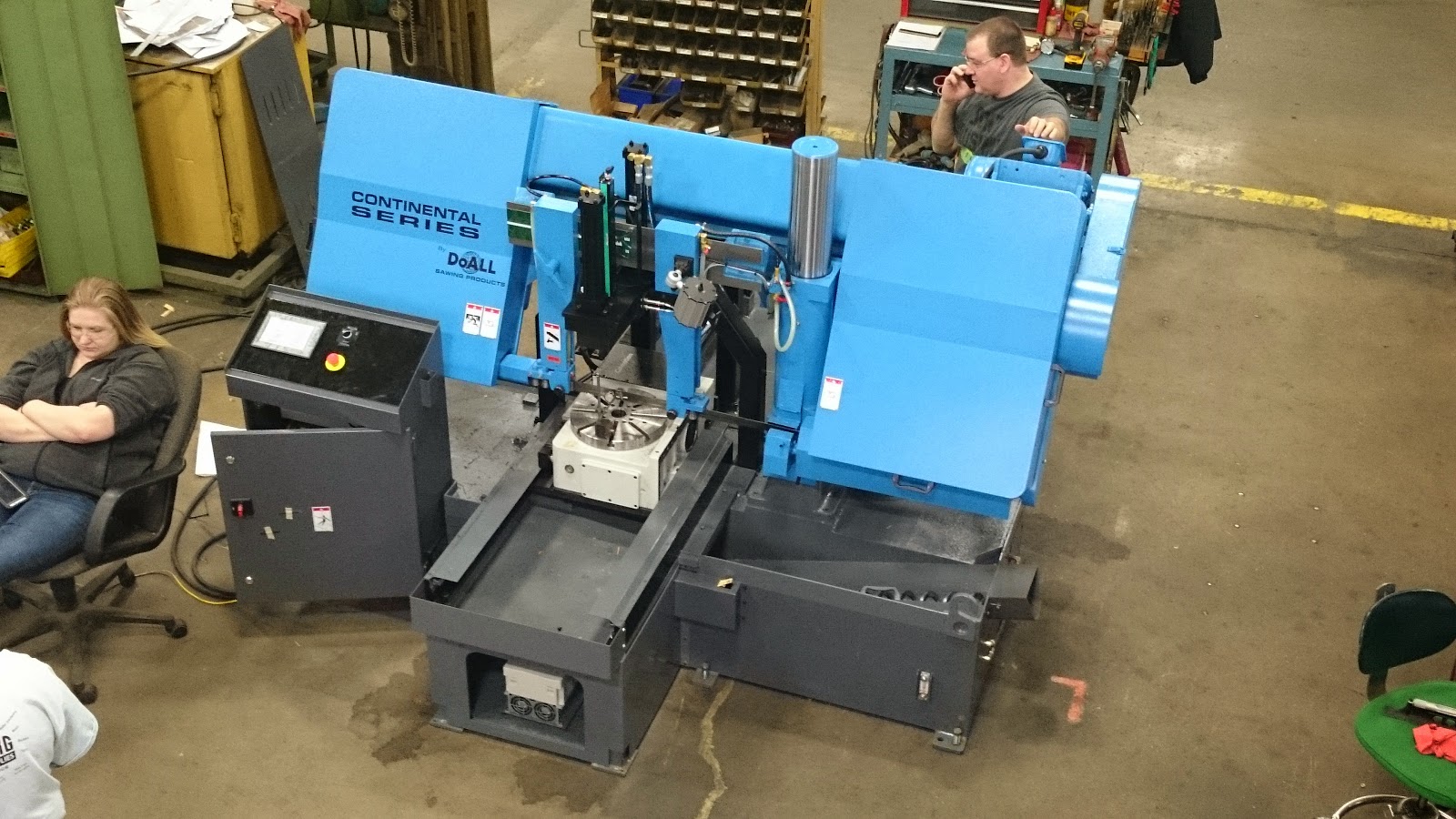 Its nickname is "Twister"

I have enjoyed getting back on track with my own projects and sleeping for more than five hours at a time. Fortunately, I have bad ass coworkers.

Quarter round wood wasn't in stock at the home improvement store so quarter round with a short ledger was purchased.  A miter saw was used to cut the quarter round into approximate lengths with a single angle used for all cuts. A radial arm saw was then set up to cut the second angle and a block was clamped to the rip guard to ensure each piece was the same length. Six pieces were cut from the quarter round. 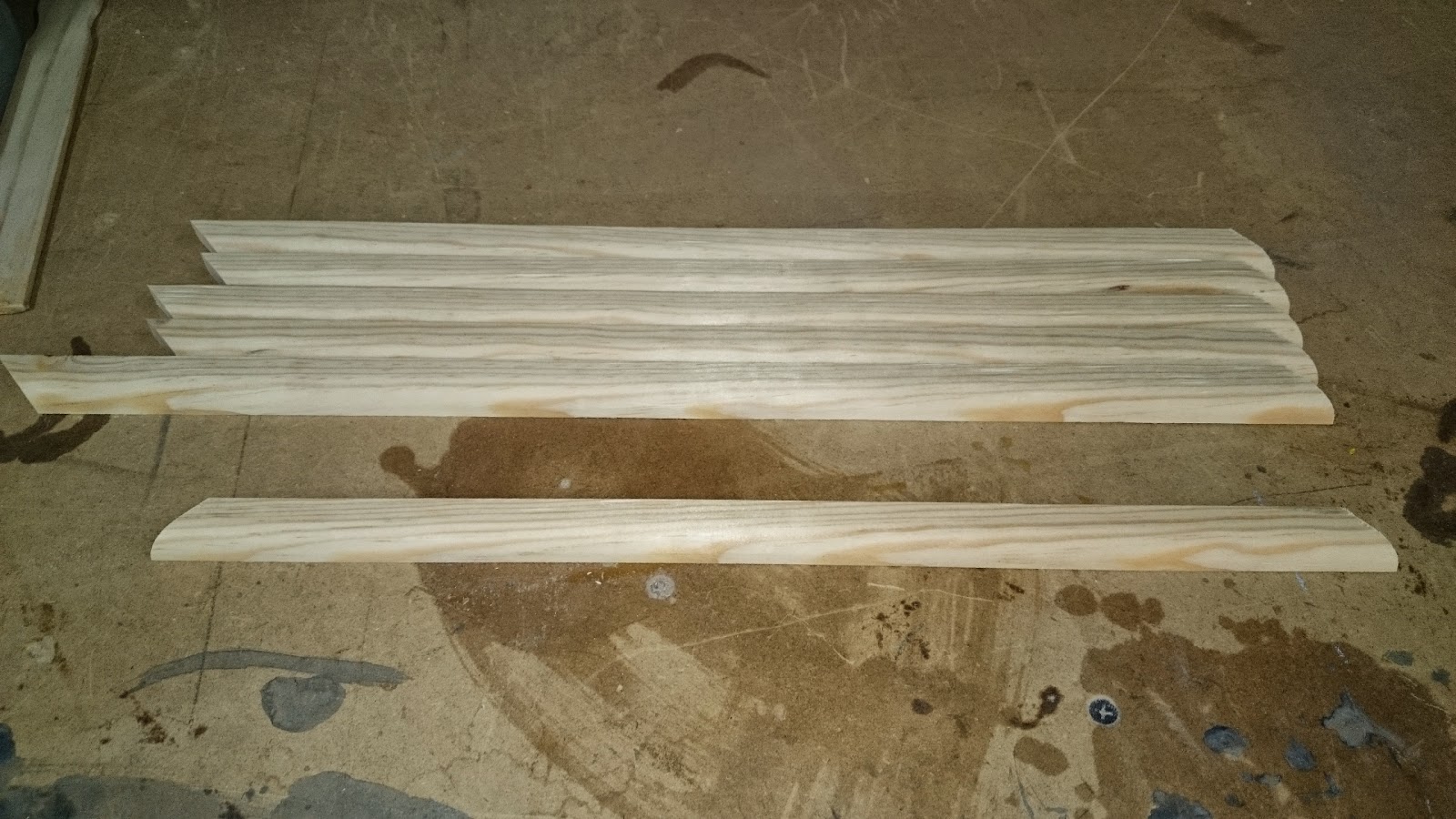 Approximate lengths of quarter round 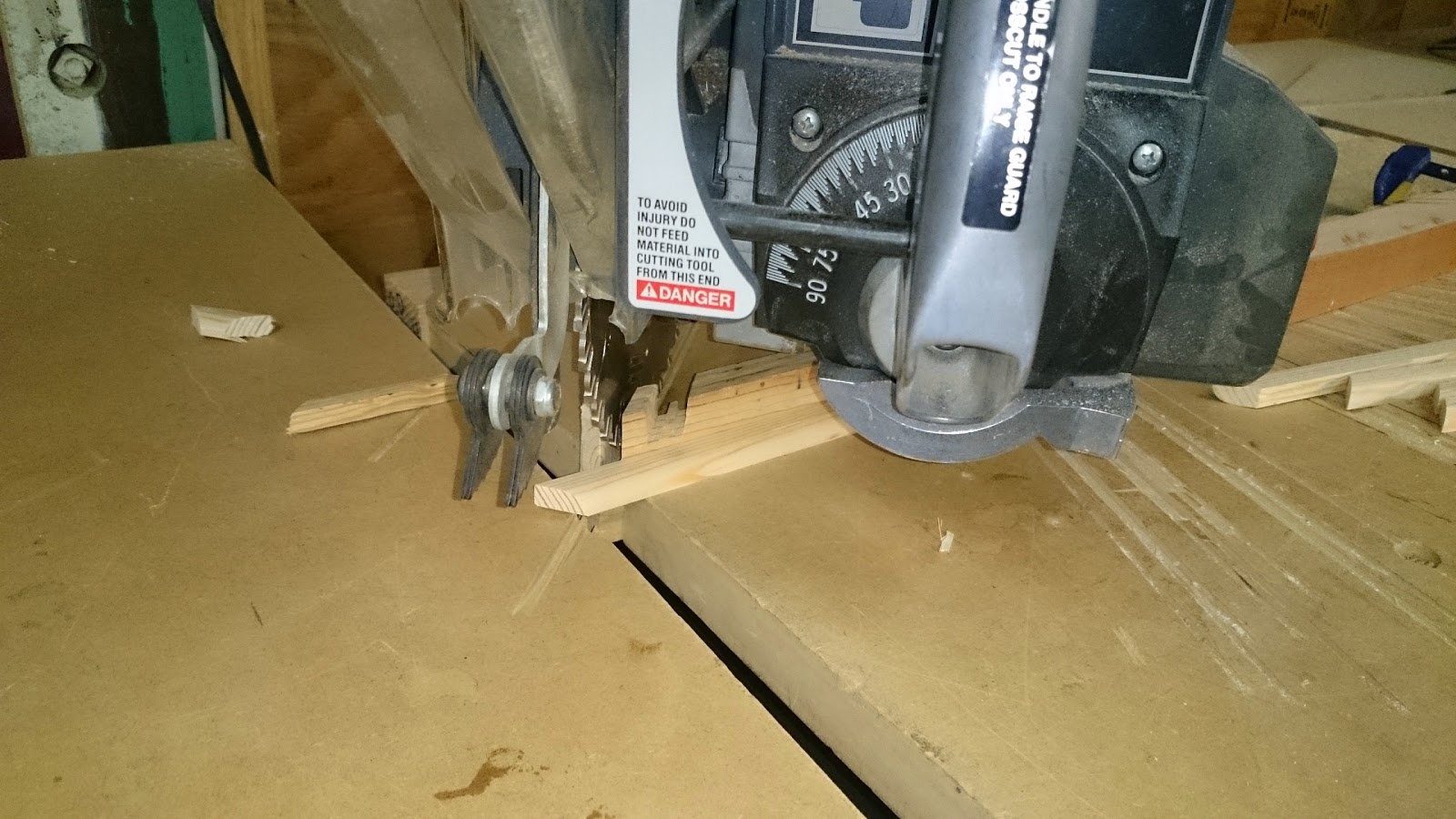 Cutting second angle in quarter round 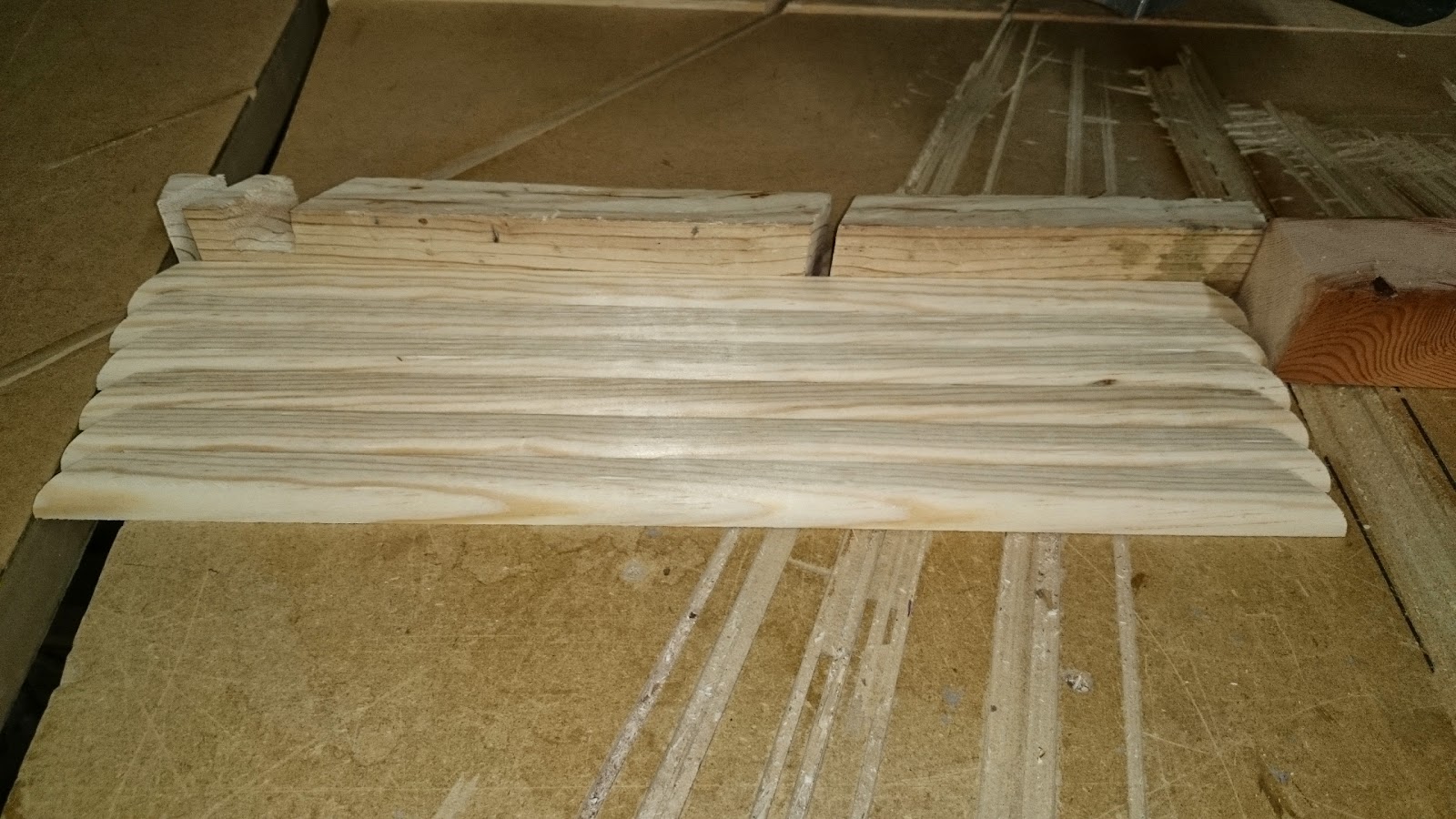 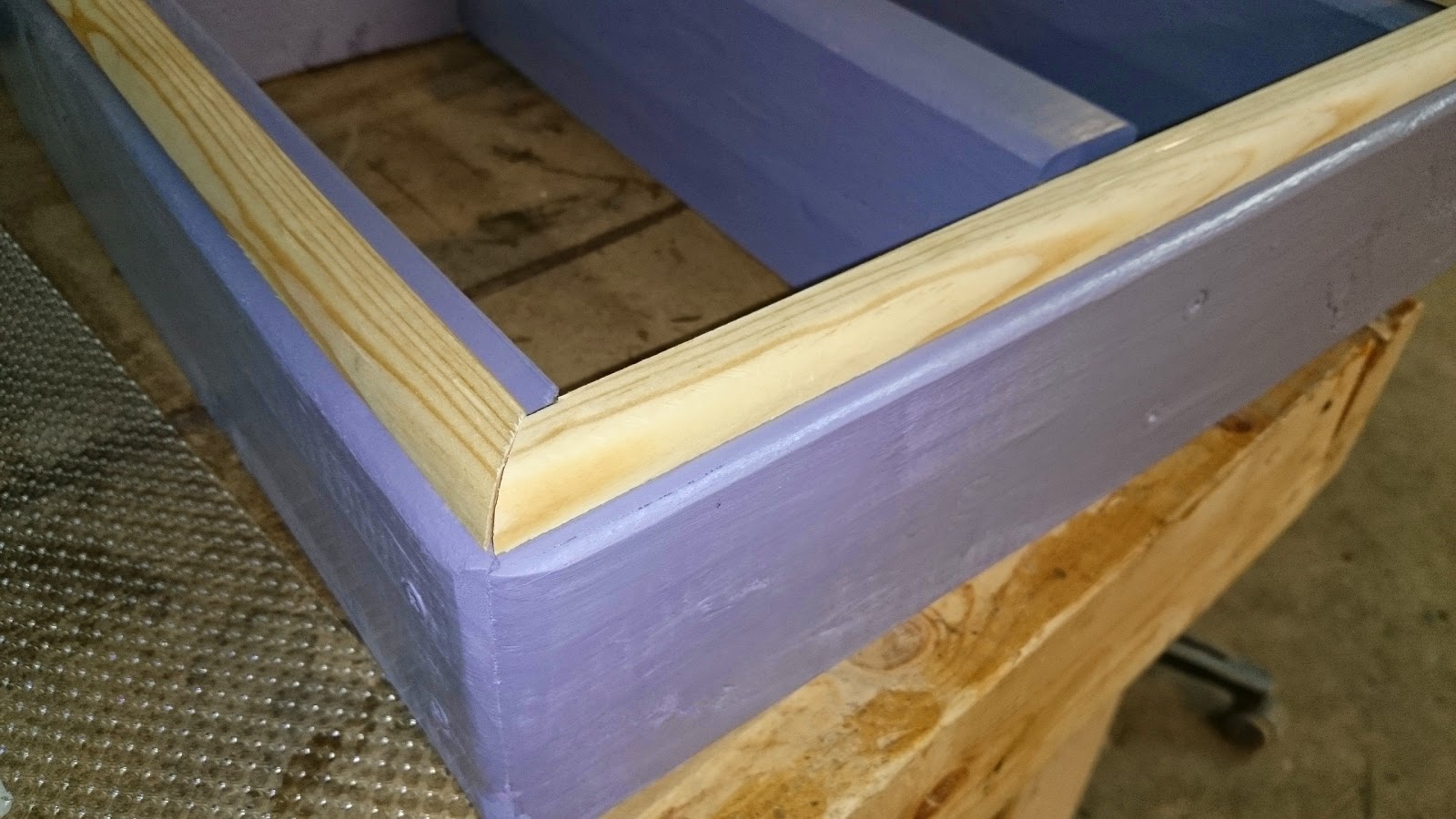 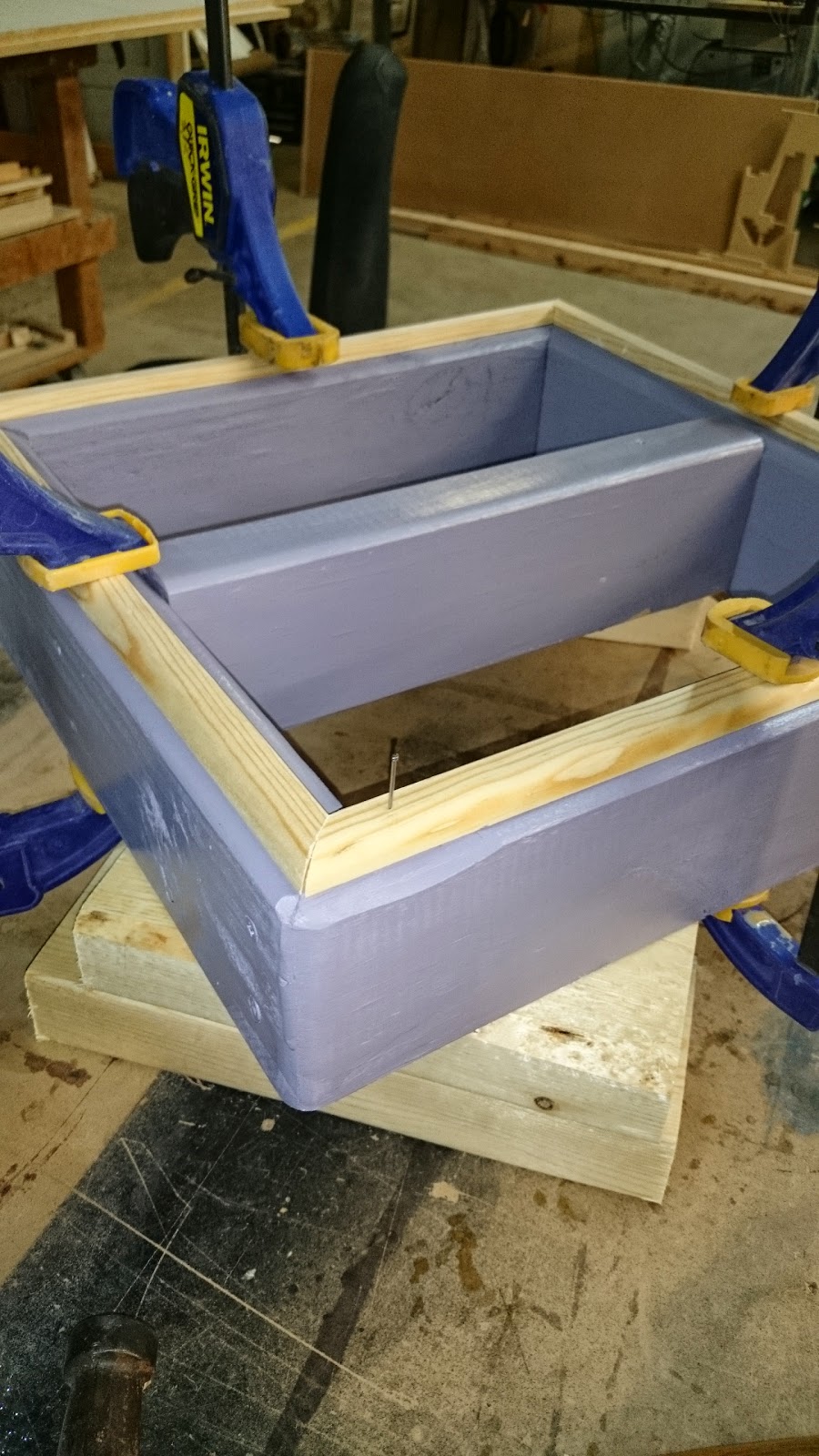 Quarter round clamped to frame 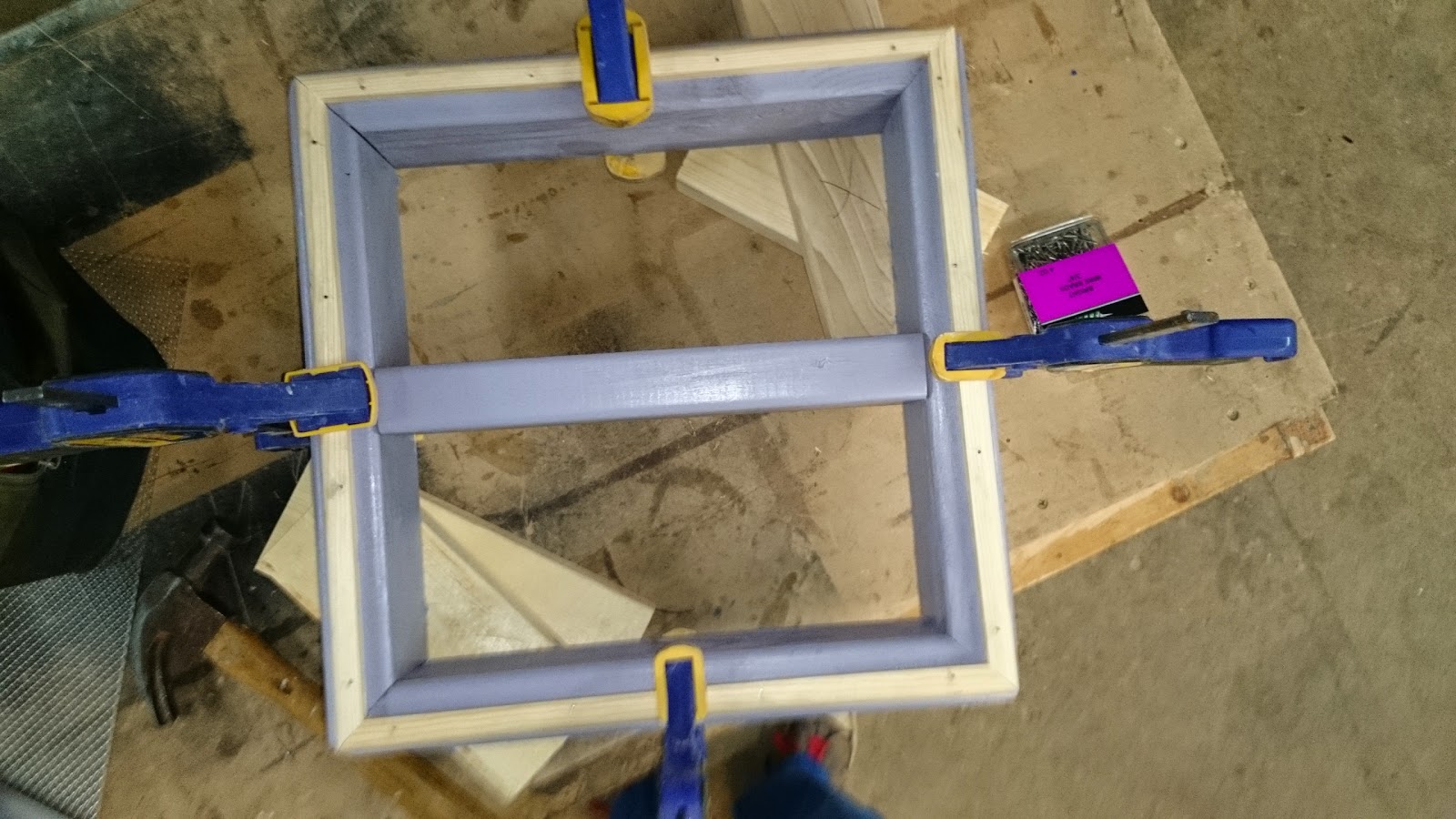 Four nails in each piece of quarter round 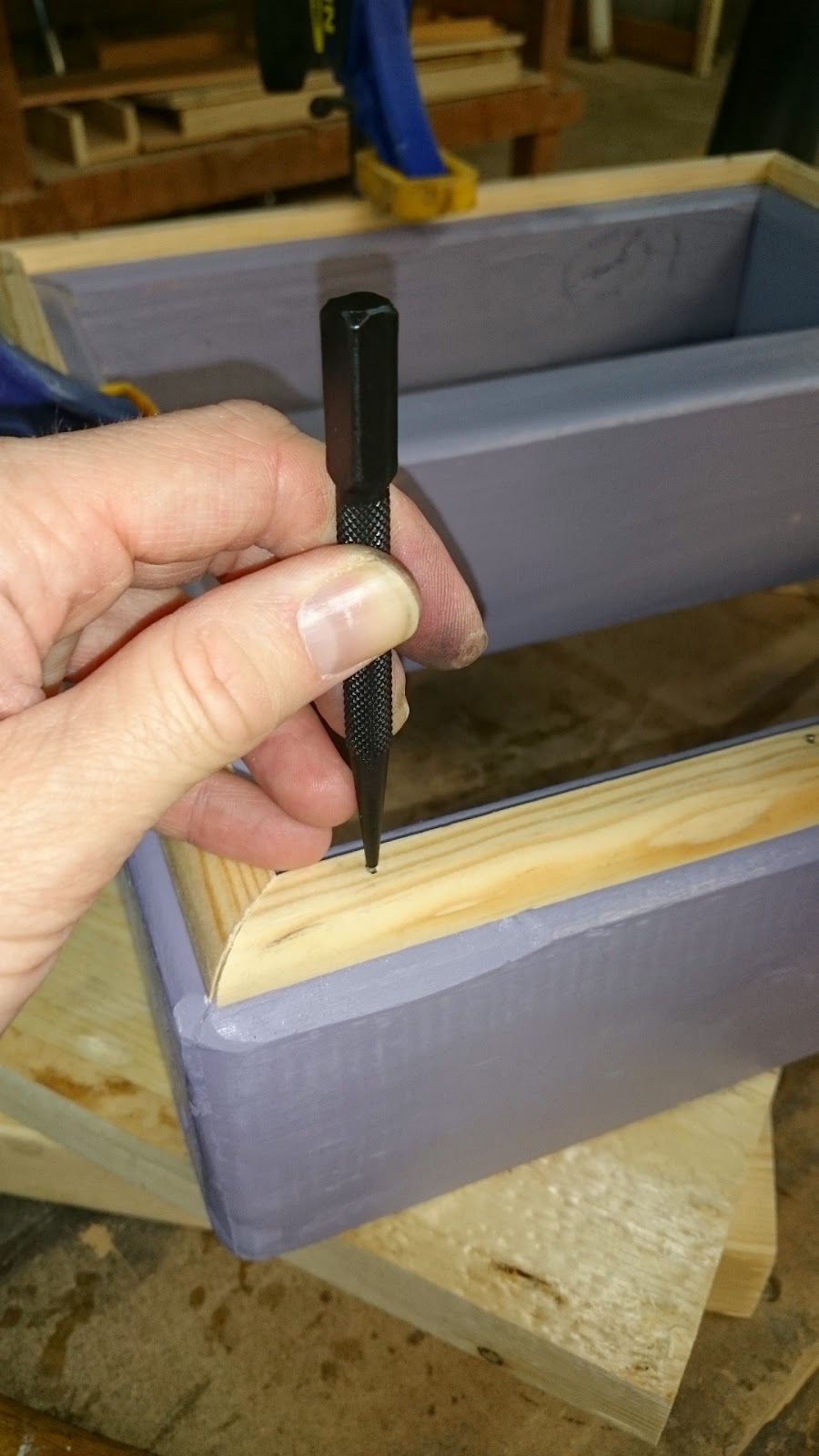 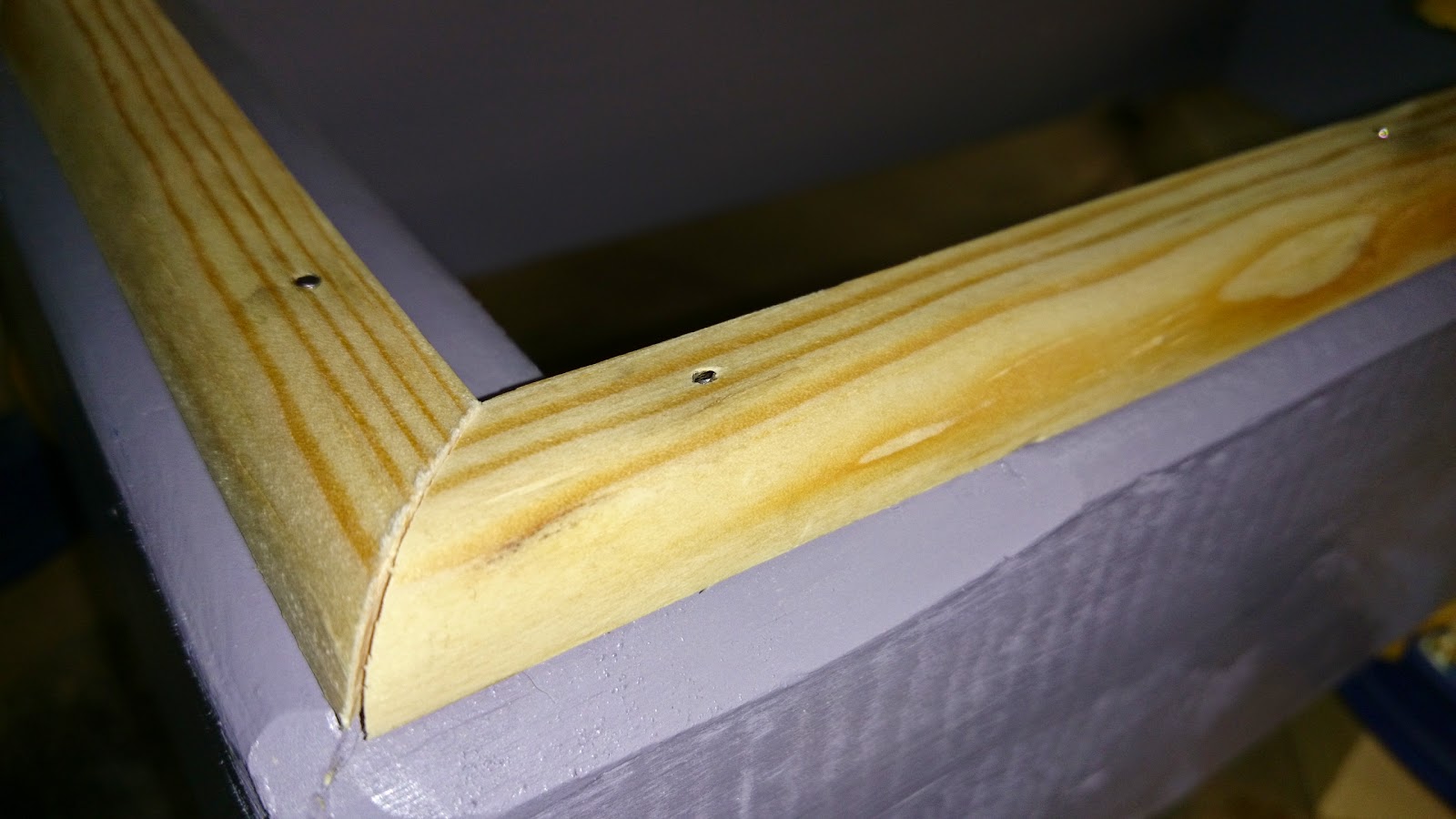 A polycarbonate sheet was cut on a table saw to the inside distance of the quarter round frame. When this distance was confirmed by a good fit of the polycarbonate squares of light diffusing sheets were cut from a sheet meant for fluorescent fixture coverings. Each piece was made into a square by cutting segments out with two passes on the saw. The light diffusing squares fit nicely into the frame. Three squares were taken from the sheet of diffusing plastic. 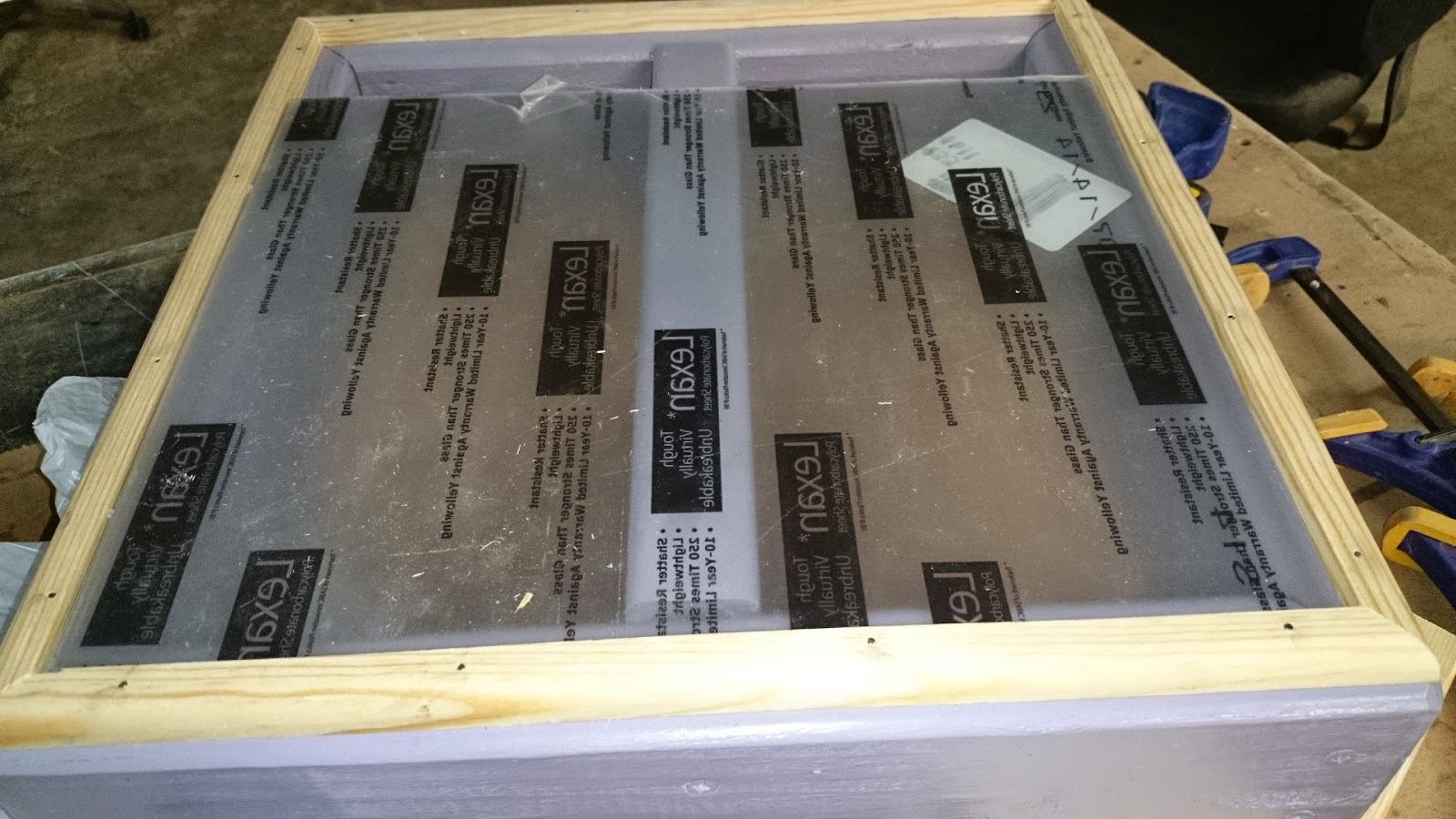 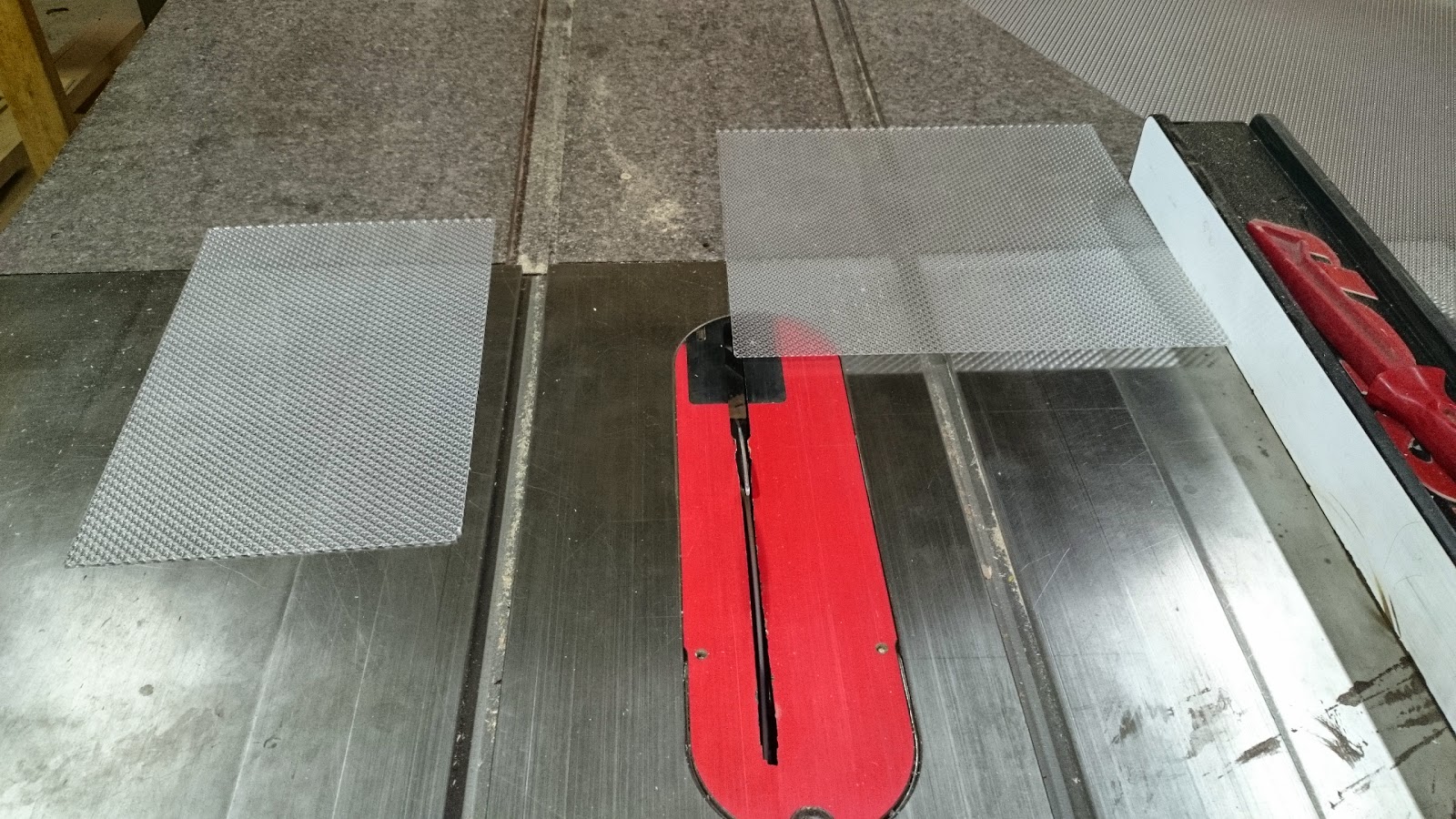 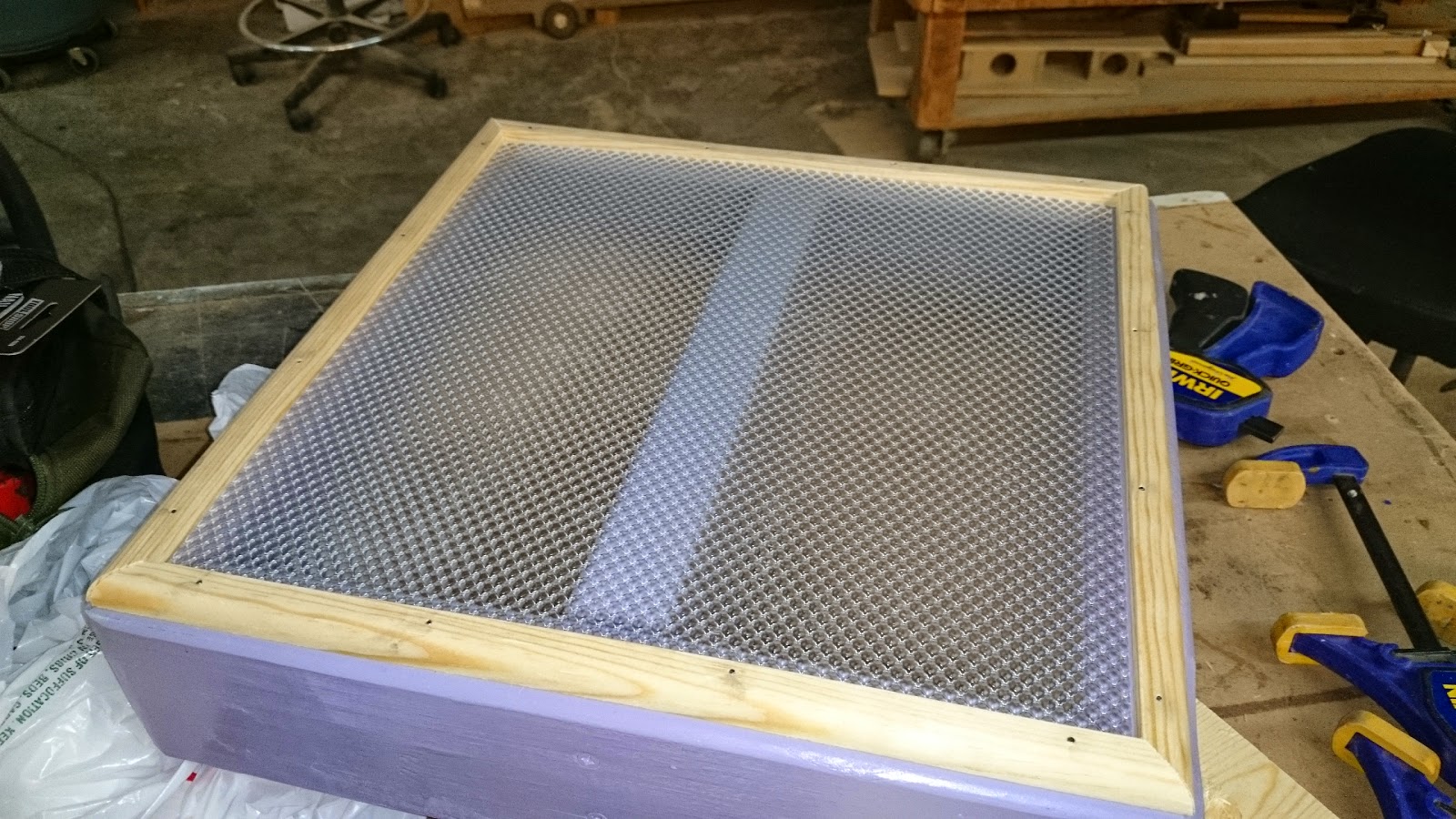 On the inside of the 2x4 frame the half-way point was marked with a line so steel angle braces could be mounted into the frame and used to mount the whole enclosure to a wall into wall studs. The 2x4 frame should have been made 16" as planned since 16" is the American standard for wall stud spacing and multiple devices could be mounted with no gaps. A short awl was used to start holes for the angle brace screws. A short screwdriver was used to install two #10 screws into each position. 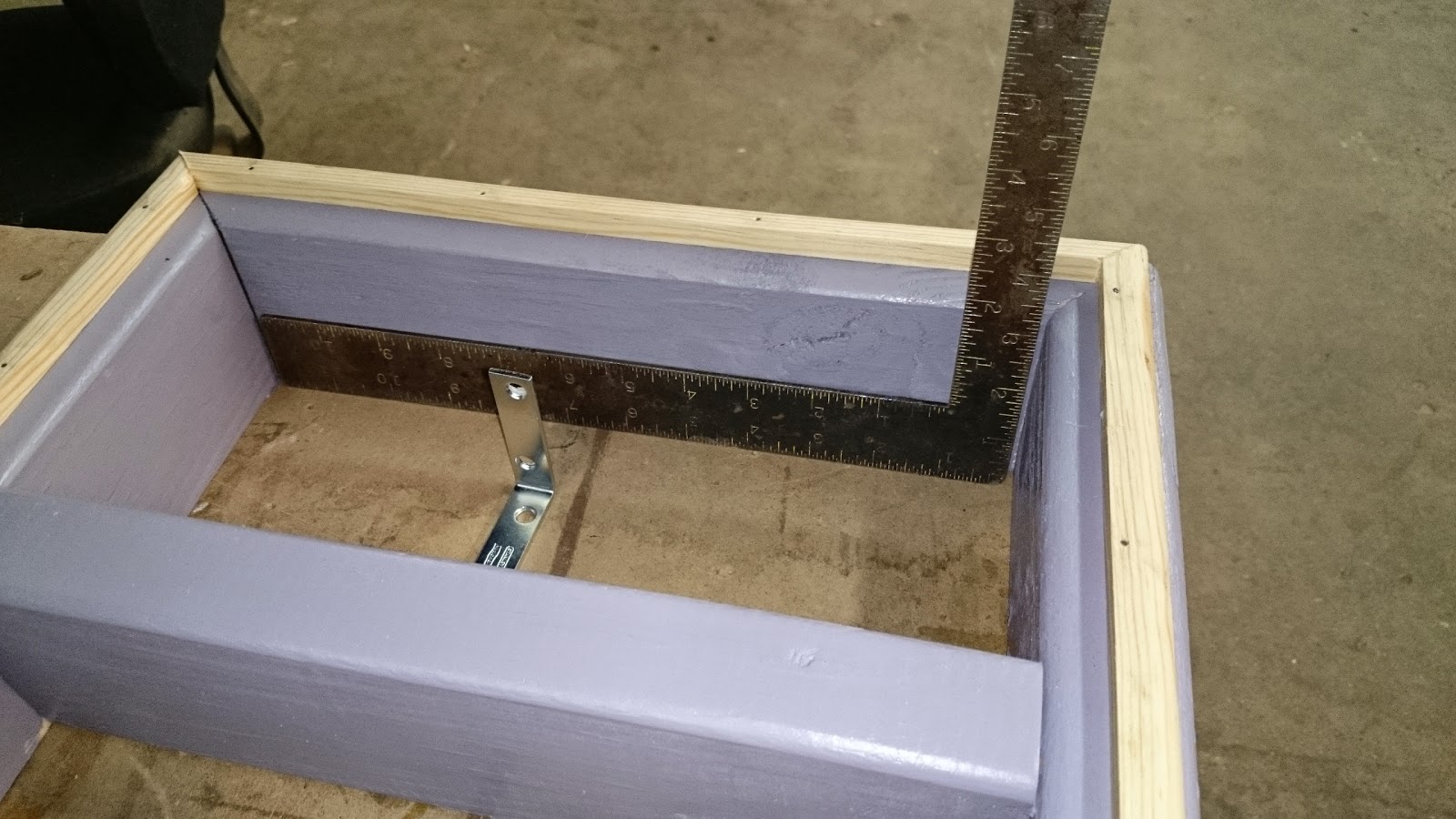 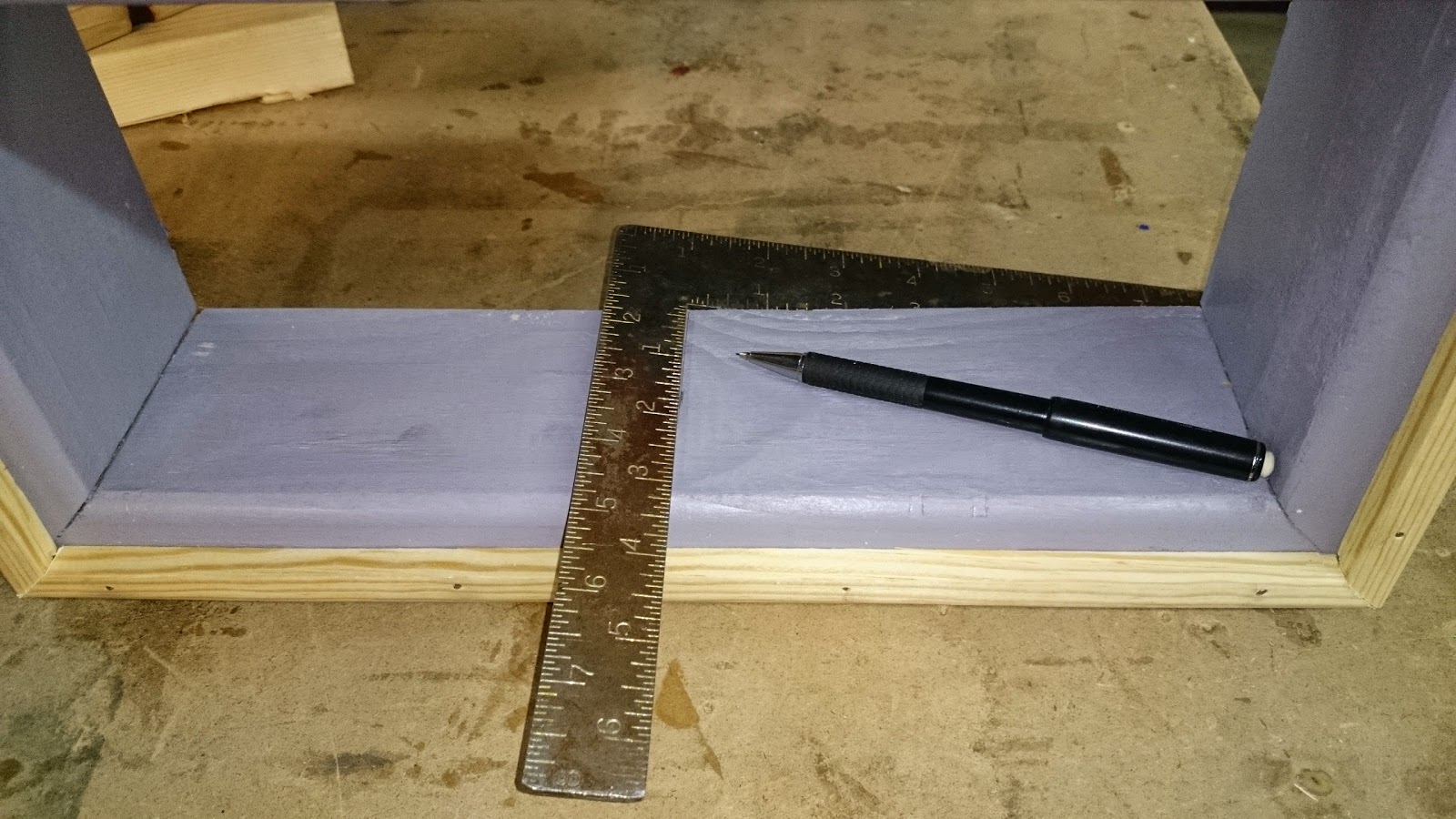 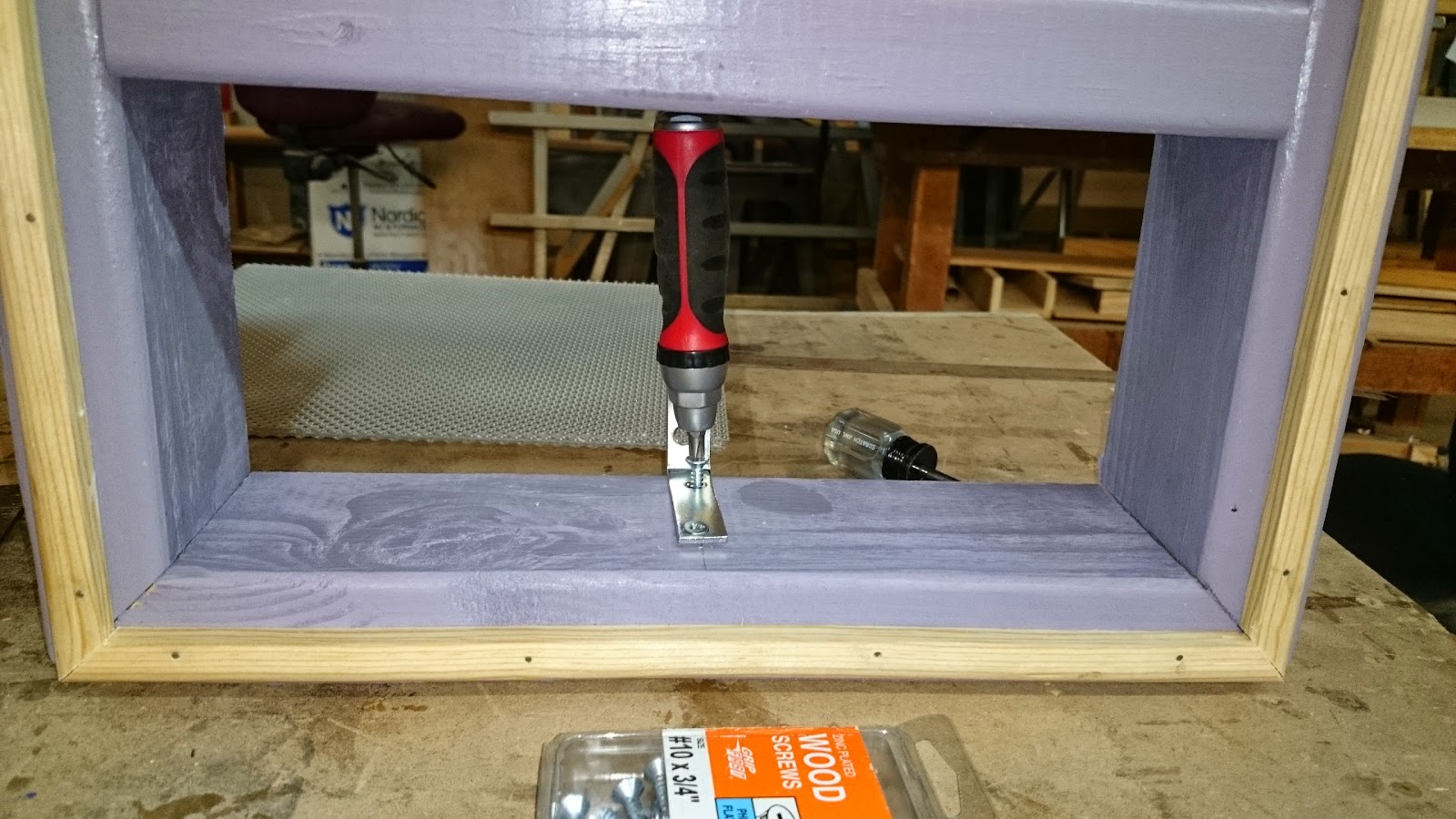 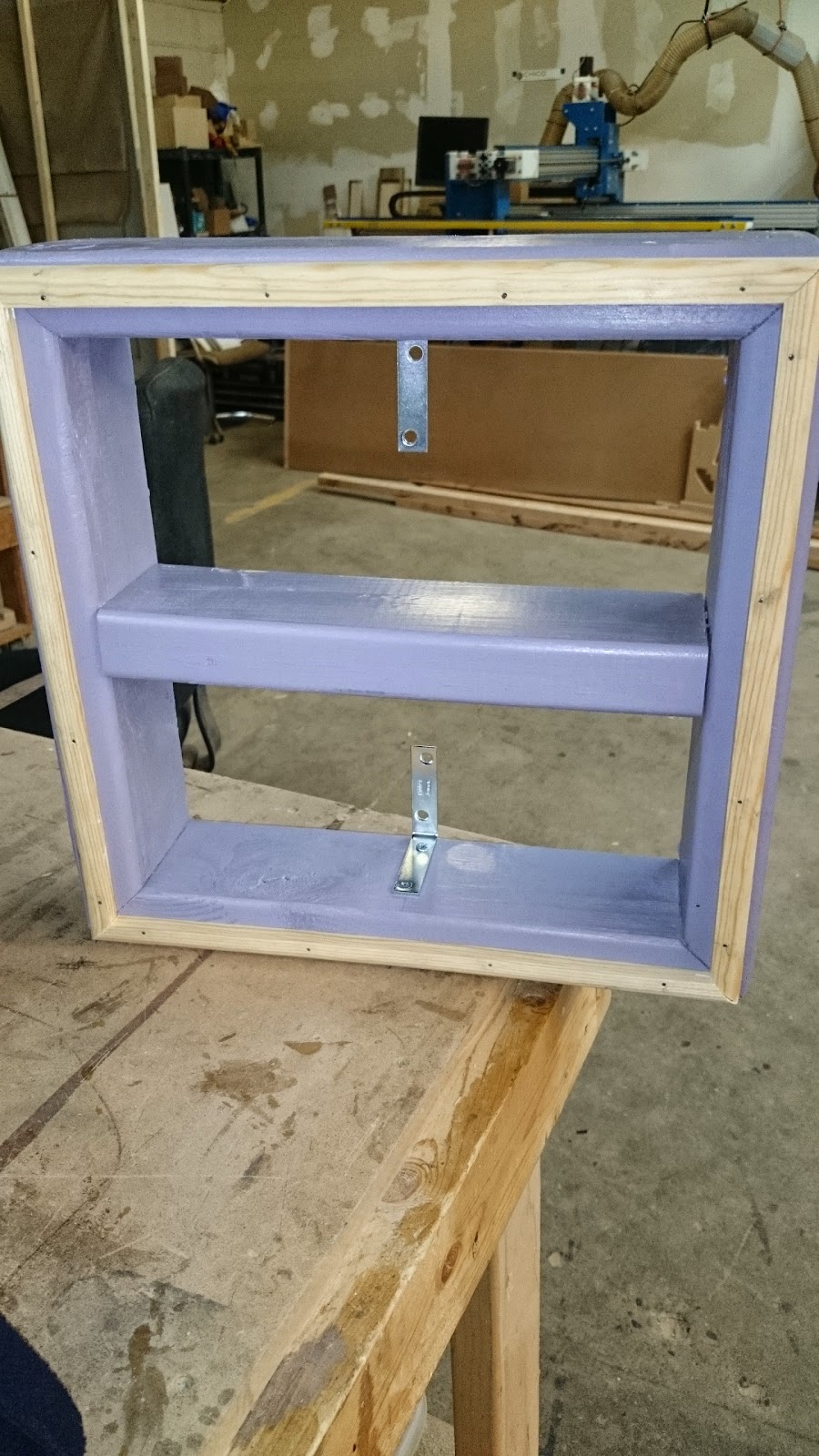 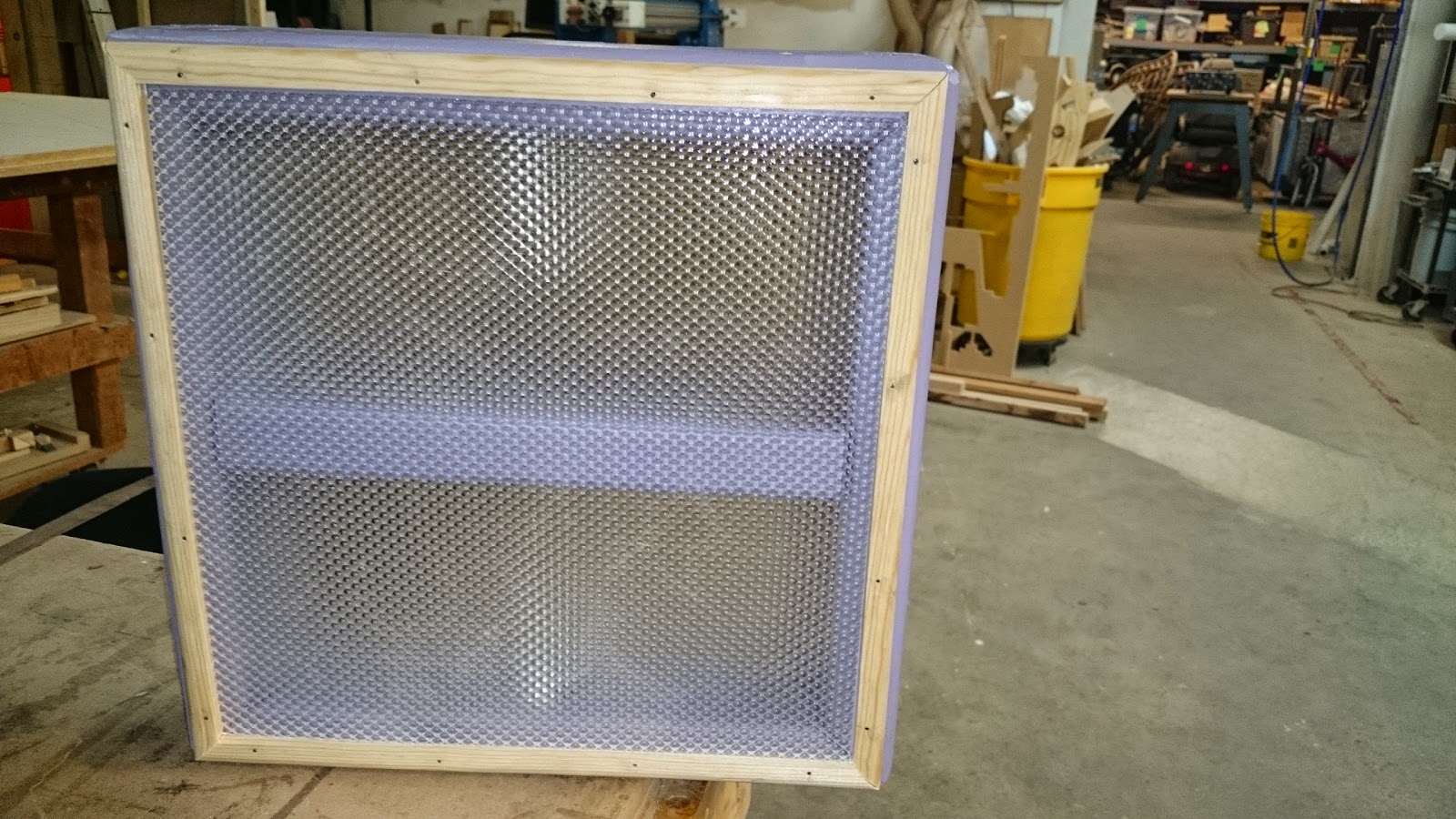 The polycarbonate sheet was trimmed back to the half-way point of the frame. Pilot holes were drilled in the sheet and wood so screws could hole the sheet in place. 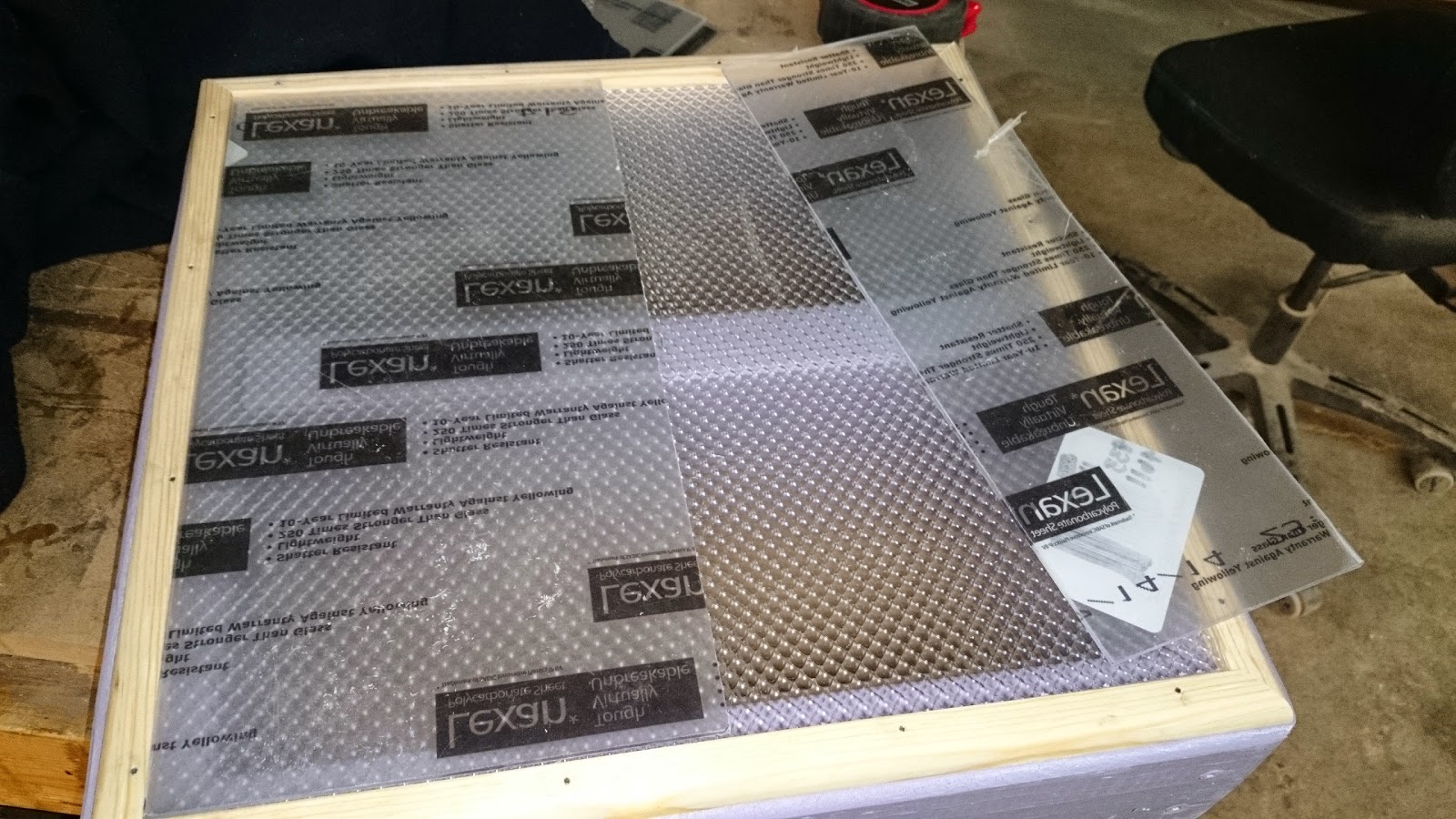 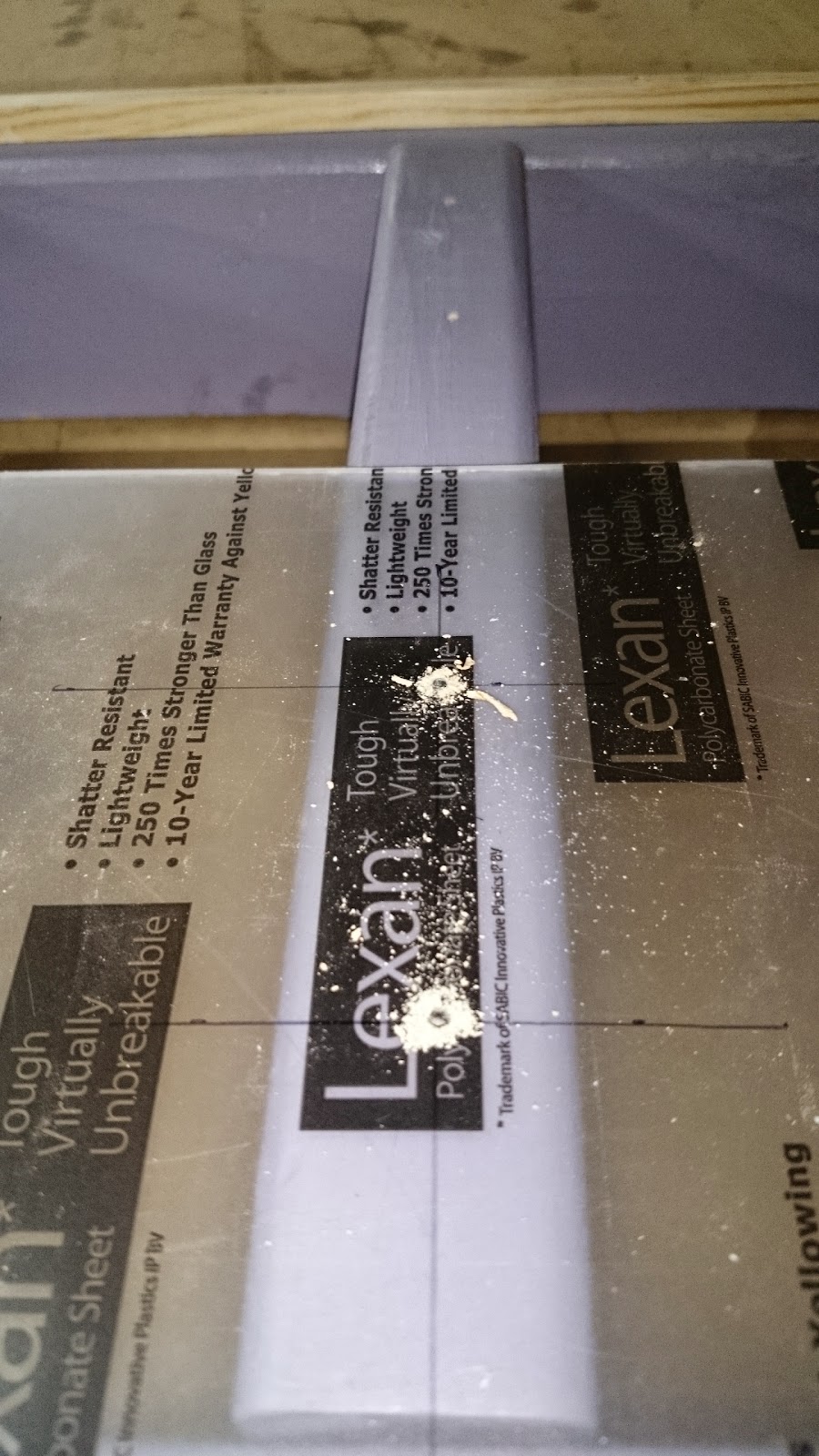 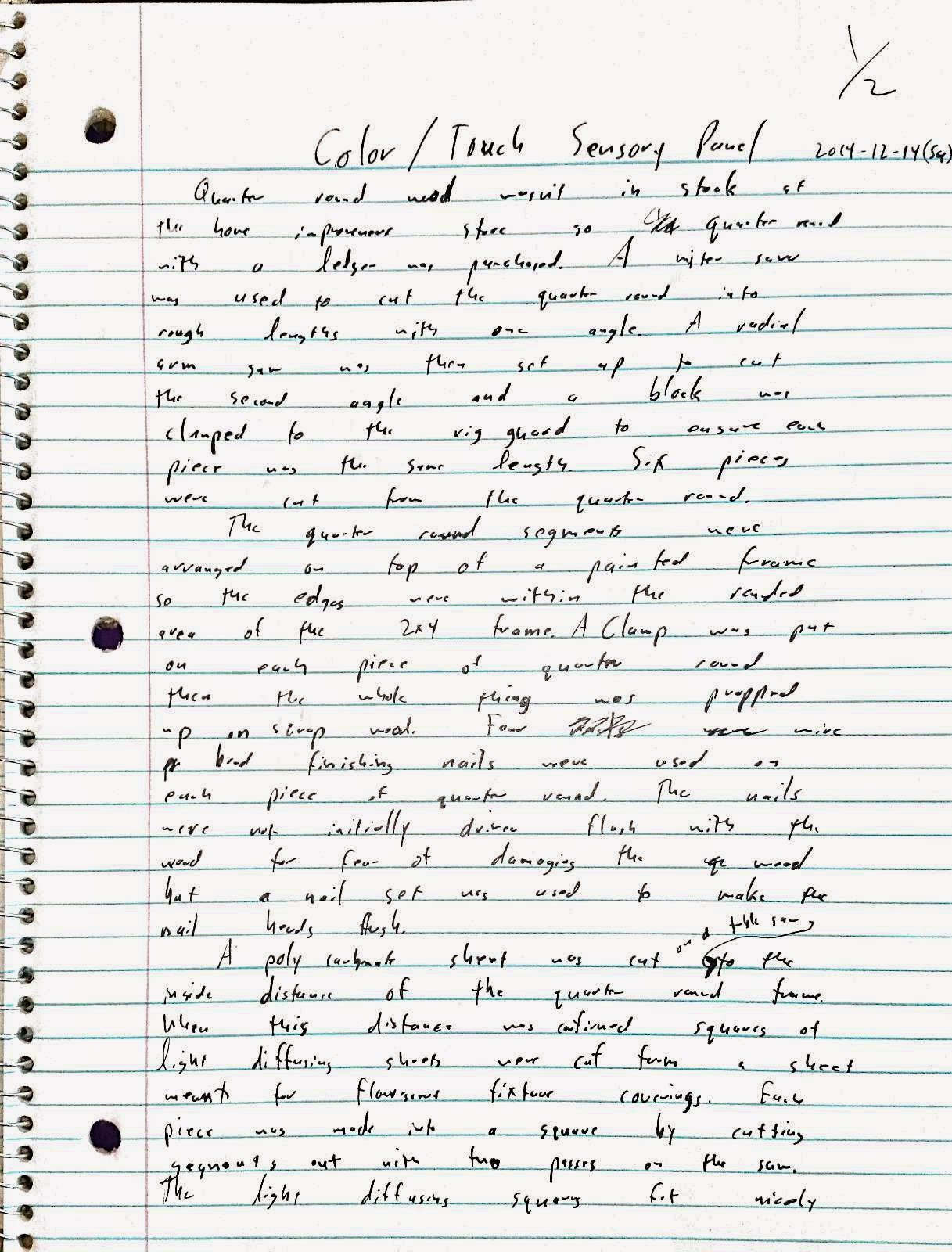 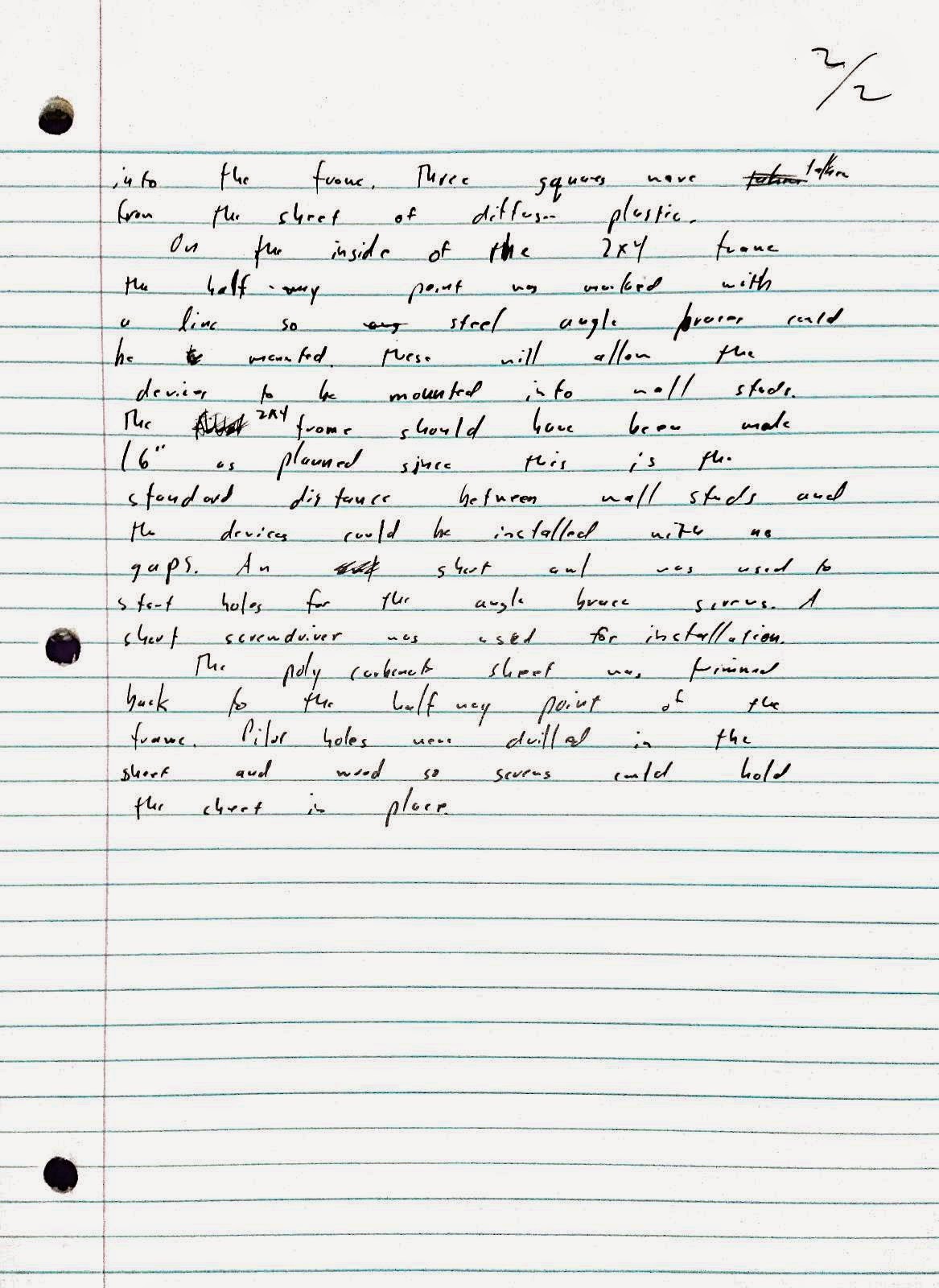