March 12, 2015
Some days bringing myself to work on a project is the hardest thing in the world. I just want to sit around in my underwear and eat Oreos. This was one of those days. It was difficult to get myself into the headspace for this project. Part of the problem was that I didn't have a clear vision of the tasks. As you may have noticed there is no To Do list for this project because it hasn't been written yet. That list is great for keeping on track because just saying "Gotta do the programming," makes it seem like the program is some great nebulous task which is intimidating. The best thing I can do for myself is break it down into bite-size tasks.


This isn't a short list but each of those things can be done in less than 30 minutes. Trying to tackle one of those items by itself usually leads to work on the other tasks by proxy. For example, when I made that list as an example I started the To Do list for this project.

A chart was made which shows which tea name should appear according to which time has been selected. The chart breaks down the six minutes (1-7 minutes) into 24 segments, each 15 seconds long. The name of the tea was written next to the time segment where it displays. Some teas, like Chinese Green only displayed during one 15 second segment while Herbal displayed for the last two minutes. This was intentional since the main focus should be the time. 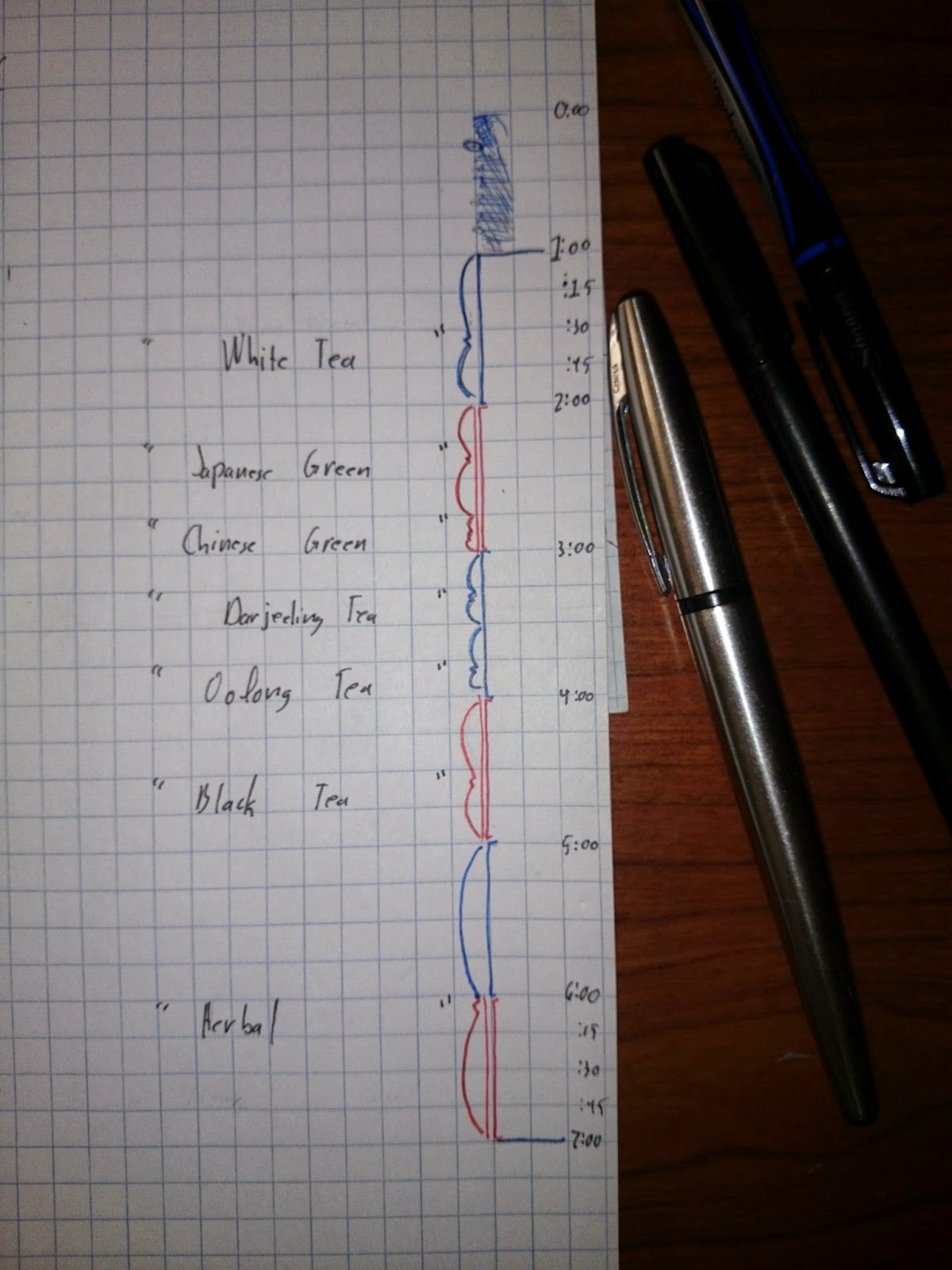 The code was written for the function which will turn a potentiometer reading into a time in whole seconds. These times were from one to seven minutes and went in fifteen second intervals. The idea was that the potentiometer value would be translated into the range of zero to 24. That number would be multiplied by 15. That gives a time value of zero to 360 seconds. After 60 seconds are added the time frame is now 60 seconds to 420 seconds or one to seven minutes. This code could have been written in fewer lines but expanding it to a few lines makes the concept more evident. 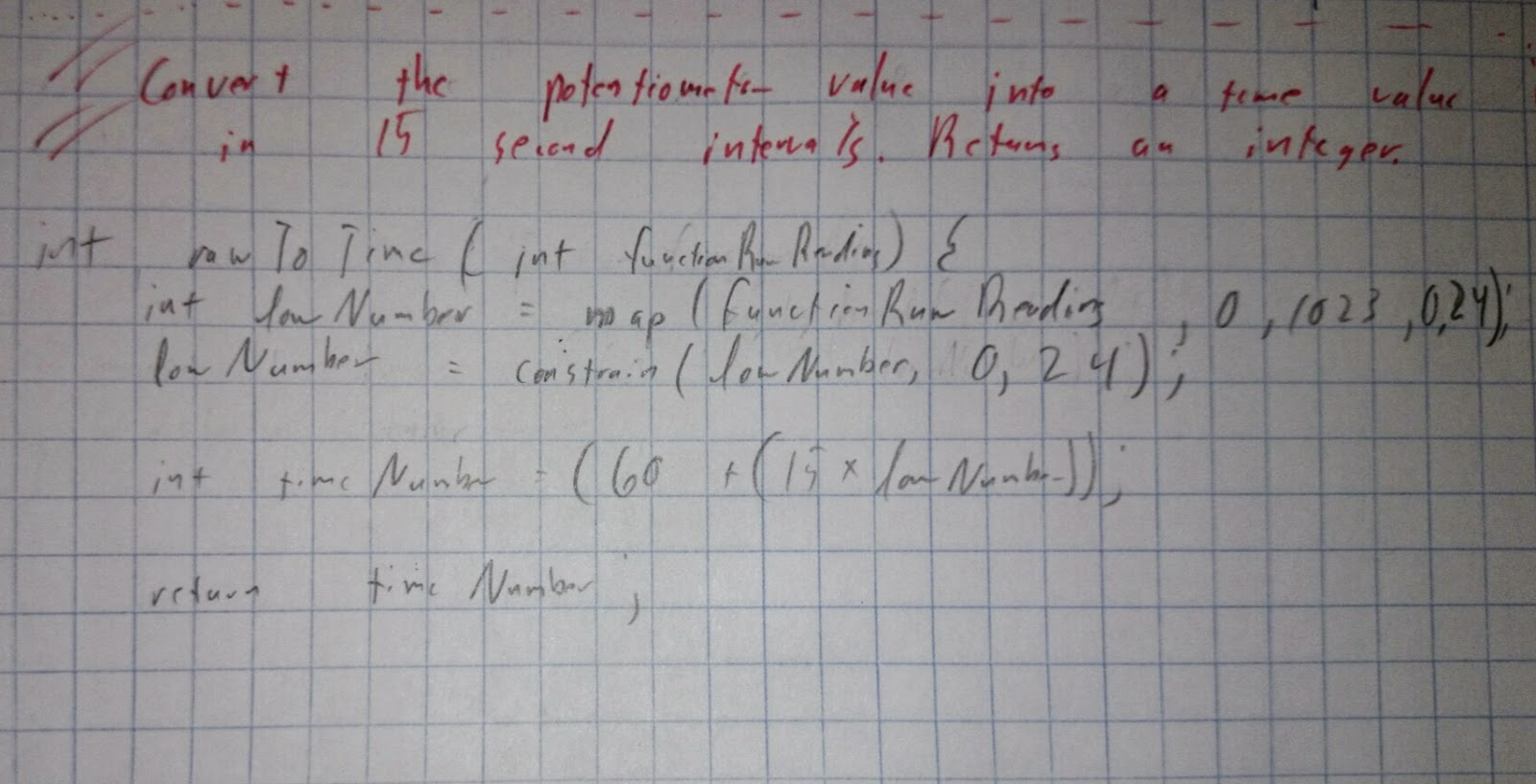 Code for translating a potentiometer reading to time

With the chart made earlier the code for the function which takes a time value and converts it to a tea name was made. This works by climbing up a list and checking for a true function. As soon as a time is found which agrees with an IF statement the return function exits this function and sends a string with the tea name back. There was also a check to be sure that the time integer being fed to this function is in the desired range or if the number being received is actually a raw potentiometer reading. If it was a raw potentiometer reading it would be converted to a time using the above function. 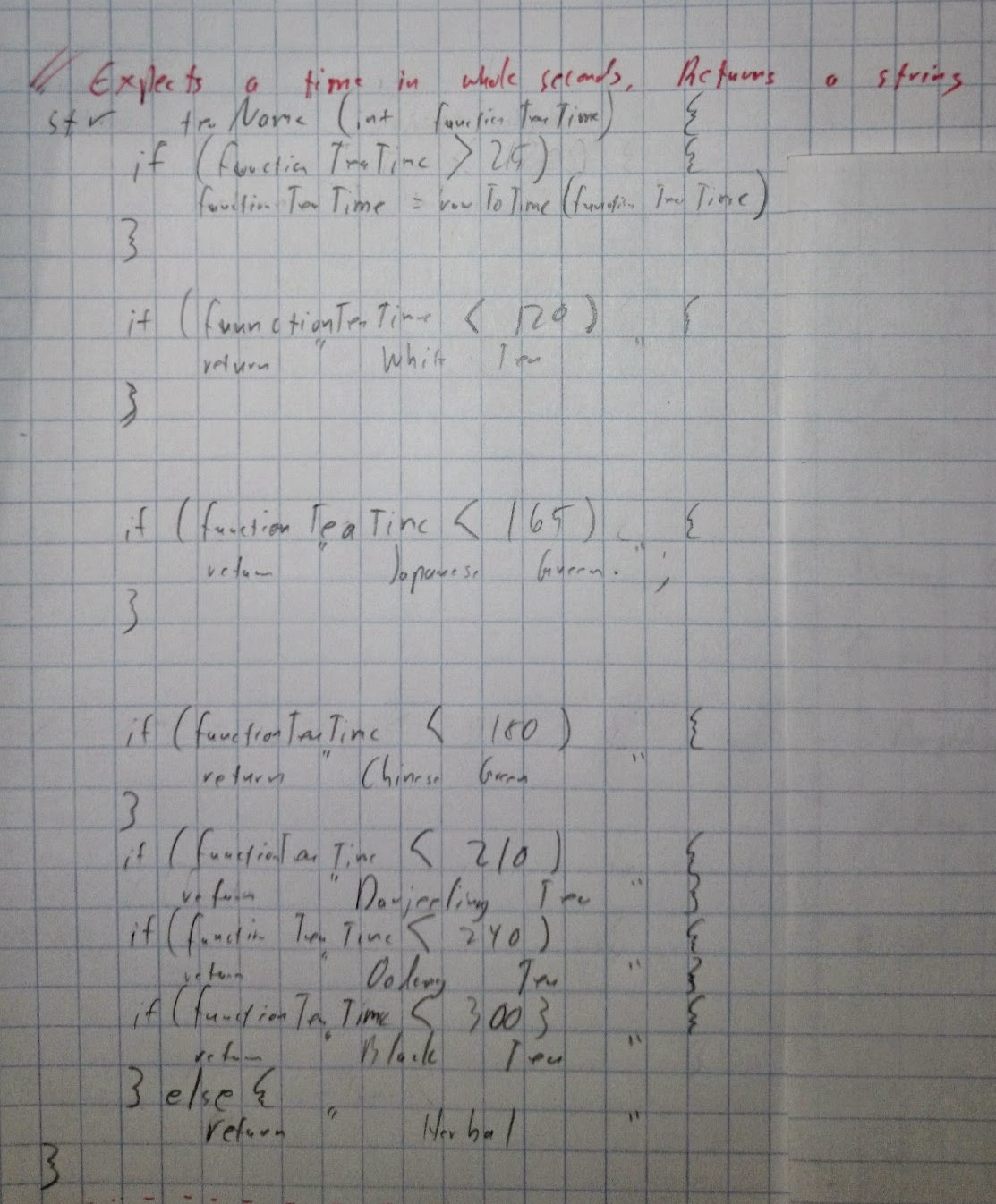 Code which returns a tea name