January 05, 2017
Wow, it has been awhile since I posted a blog based on a series of pictures. Most of the recent posts I’ve written have been about recordings or they’ve focused on a quick video. Programming and recording don’t make for particularly important pictures. Finally I’m working with my hands again. Wood working no less. 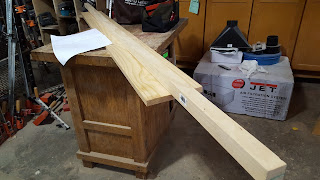 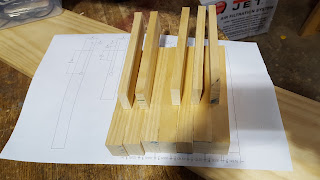 By far the most difficult part was cutting away the excess wood in the white keys to make room for the black keys. Spaces and measurements had been made beforehand which simplified the process but making the required cuts was not a simple matter. Most of the problem was cutting a straight line the length of the keys. A bandsaw was used but it did not make an accurate line. Some of the roughness was sanded away but the inaccuracy remained. 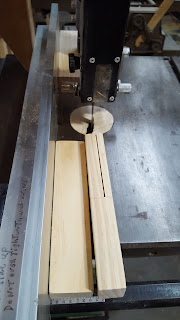 Cutting away material in white keys

Holes were drilled in all of the keys. This hole was slightly larger than the rod which would go through the keys. In this case a 1/4" bolt was used but a 6mm would work equally well. A 17/64 drill bit was used so metric builder should use a 6.5mm or 7mm drill bit. 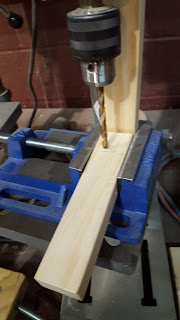 All the white keys were lined up to see the space between the keys where the black keys would go. Alignment was imperfect and another method of producing keys may have to be found. Perhaps laser-cut acrylic could be made or CNC-cut wood. 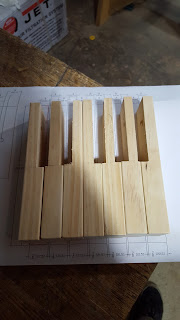 The black keys were shortened to approximately 3 5/8” (90mm). This length was not measured but it was slowly adjusted over numerous cuts to find a length where the black and white keys would not bind when pressed. When all the keys were cut they were assembled on a bolt. Weights need to be attached to the back end so the keys currently droop. 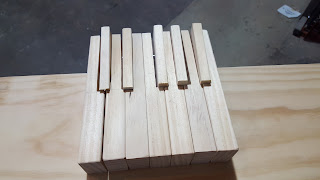 All keys on a single bolt