January 09, 2017
Making standard musical keyboard keys by hand proved to be more difficult than it was worth. It would be much simpler, and reasonable for this project, to make keys with simplified proportions. A sketch was done which showed all twelve keys but simplified so only three types of keys were necessary.
1.    White keys with a gap for a black key
2.    White keys with no gaps
3.    Black keys 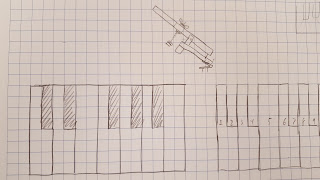 Rather than make the keys out of a single piece of wood it would be easier to make standard width blocks of wood and glue the, together in order to make a key with a gap. This should keep all the corners crisp. While designing it became apparent that the wood should be aligned so the grain went in the direction of the key to maximize strength when someone strikes the key hard. Square wood stock was purchased in two widths with the hope that it would be strong enough for this project. The square wood was simply cut to length. Long pieces of the wider stock were meant to be the white keys while the narrower stock was meant to be stacked two tall to make a black key. Only enough wood was purchased to make a couple test keys. 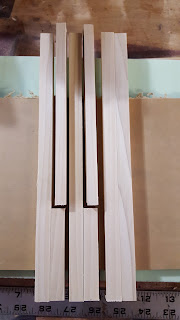 Long strips of the wider stock were glued to short blocs of the wide stock so they corned a white key with a gap large enough for a back key. This can be seen in the picture. Black keys, not pictures, were made by gluing two equal-sized lengths of wood together. 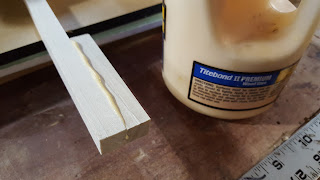 The next method was less expensive and more versatile but required more work. It was less expensive because it used a single cut of wood, a 2 x 8 and versatile because the wood could be cut to most of the necessary sizes and purchased in a variety of wood breeds. This happened to be pine. A table saw was used to cut all the necessary sizes and several extras just in case. 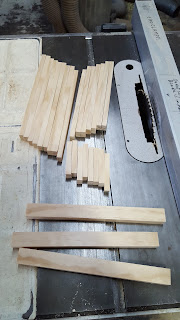 Pieces cut in the last step were aligned to show what they would look like as a musical keyboard. The black keys, which are clearly all the same color, were elevated by one of the spare blocks to make it clear which ones were which. These keys were meant to be hinged in the middle so not all of the wood will be visible in the prototype. 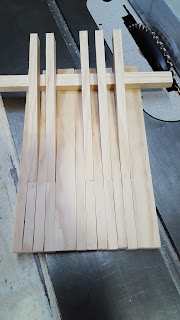 Like the method which used square stock these pieces had to be glued together. Enough wood was cut to make a full octave so it took a bit of time to glue everything properly. Titebond II was used since it was stocked at the hack space. 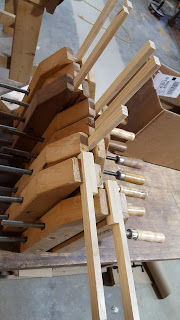 2 x 8 white keys being glued together