May 14, 2015
PVC pieces cut for the test stations were assembled. Before adding screws for stability the stations will be used to see if friction provides enough stability. Keeping the design easy to break down was important since it was being assembled at a hack space but testing will be done elsewhere. After assembly the electric motors were attached using #8 machine bolts and nuts. 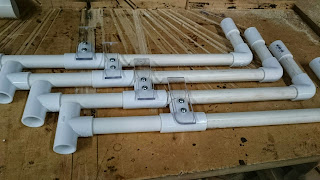 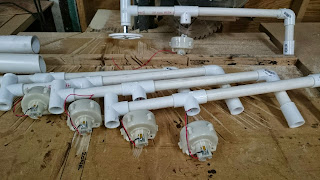 Right angle PVC adapters and couplers were drilled all the way through with a pilot drill bit. This hole was smaller than the screws which would be put in the holes. Across from the side where the screw would go larger holes were drilled so a screwdriver could pass through and tighten screws. 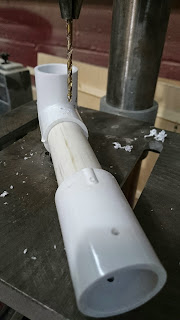 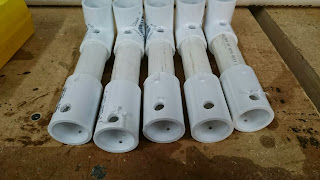 Three five foot pieces of 2 inch PVC were joined with a T connector to form the structure where each station will be mounted. There will be ten vertical feet of 2 inch PVC which will have a station mounted every 26 inches. Perpendicular to the vertical mounting structures will be a horizontal piece which will connect to a sturdy structure, probably balcony railing. Screws were inserted into some of the connectors to eliminate rotation. At the end of the horizontal piece is another angle connector and short length of 2 inch PVC which is meant to help eliminate rotation as well. 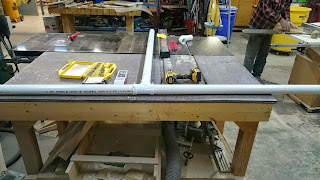 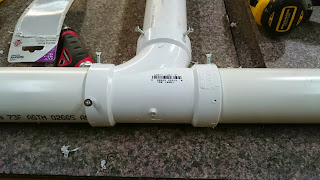 A horizontal line was drawn on the vertical pieces by layering scraps of wood to approximately the midpoint. Black marker was drawn along the length of each vertical piece to align the stations. 26 inches were allotted to each station for clearance. Since a bottle is 30mm tall, approximately 12 inches, this should be sufficient clearance. Taller turbines may need to be installed at the top location. If friction is enough to hold a station in place then stations can also be removed at will to provide room. The coupler and and angle adapter pieces assembled with the stations - which were drilled earlier in this journal - were really part of the base so they were mounted at the 26 inch marks to become part of the base. 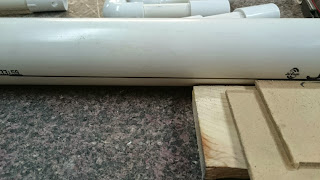 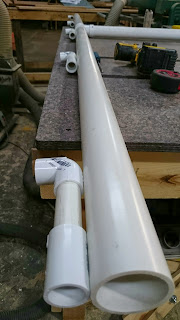 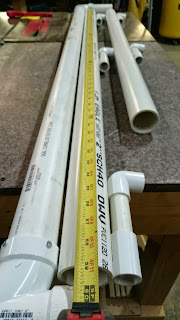 Base structure broken down for transport