June 03, 2015
After observing that the wind turbines didn't have enough force to turn the generator some designs for an integrated generator were conceptualized. The integrated generator would eliminate the transmission method, pulleys and a rubber band in this case, so a lot of friction would be eliminated. Since a homemade generator would be a whole new project it was decided to replace the large pulleys on the turbine shafts to reduce the ratio which would make it easier to turn the generator.

An updated version of OpenSCAD was downloaded but the pulley model would not render correctly. Whether this is a fix from the old version or a break in the new version is unknown. Minor changes to the code were made but the number of problematic variables was too high to worry so an older version (2014.03) was used to render a smaller version of the pulley. 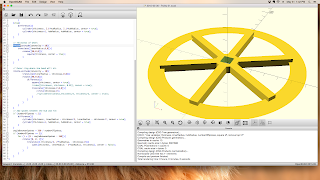 Incorrect rendering of the pulley 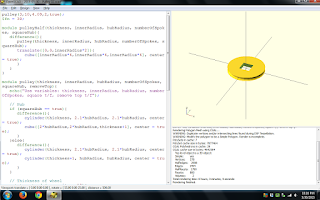 The updated version of OpenSCAD rendered the outer rim as a 2D disc. It should have been a disc as thick as the spokes with a channel on the outside for the belt to ride in. Modifications were made in an older version of OpenSCAD to make the new pulley thinner, remove the spokes, and smaller in diameter. Five copies were printed. 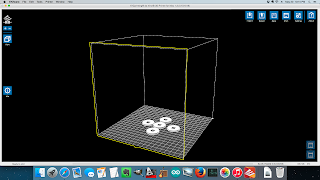 Five copies of the pulley in the printer software 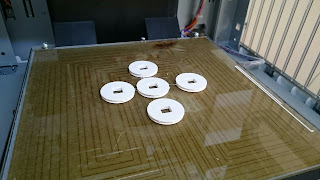 Five printed copies of the pulley