June 09, 2015
One of the small pulleys replaced the large pulley on a short carriage bolt. The pulley was barely as thick as the band so it is likely the band will be prone to slipping off. In OpenSCAD a thicker pulley was modeled and two copies were printed but not before the first was installed. A locknut on the carriage bolt made installation of the small diameter pulley difficult and the pulley would dig into skin. 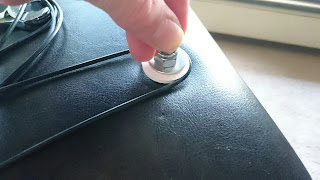 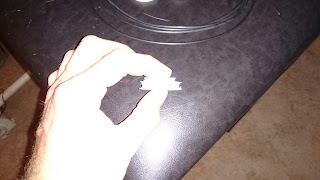 Comparison of thin and thick pulley

Electrical  connections to one station were disconnected so it could be taken to the hack space for modification. 3/4" PVC was cut to roughly 6.25" (160mm) and a right angle PVC adapter was attached to the piece which formerly held the generator and turbine bearings apart. The spacing between the generator and turbine bearings was already short and the smaller pulley further increased the length needed between the two. The right angle also allowed for some minor height adjustment between the pulley and generator but at the cost of skewing the band. PVC pieces were fitted securely before cutting four additional copies of the PVC for use with the rest of the stations. 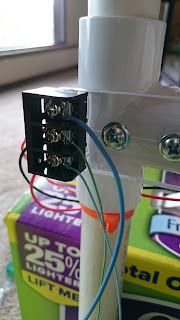 Electrical before disconnection.
Taking a picture is easier than writing down all the wire colors. 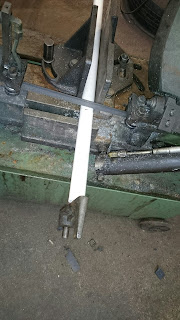 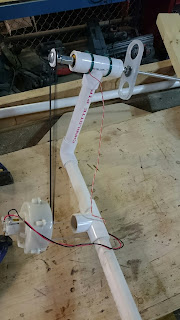