August 08, 2015
Personal stuff alert! Skip down if you want to get right into the project STUFF.

This week I started a new job! My old job had a lot of really cool coworkers, I still chat with them, and I will miss seeing them daily. My manager was one of the best people I had ever worked for and he is largely the reason I stayed at an otherwise toxic workplace. I left because management had a chronic inability to change despite losing every single engineer and ELIMINATING their walking knowledge base. I will miss the people but I don't miss the job.

Chording keyboard work went full steam this week. The model was revised again but only minor changes were necessary.  One change which isn't visible below was the angle between the button presser and the key lever. This change brought the buttons up instead of angling them down. This way the keys come up to meet the user's fingers instead of having the bulk of the keyboard in the palm. Either of these configurations would be perfectly usable but attaching a keyboard close to the palm is more difficult than further out. 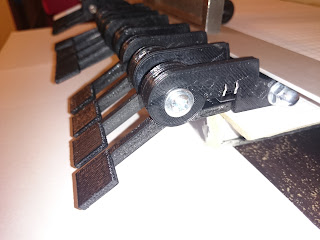 Three versions of the keyboards in a row.

With the finger keys situated pretty well the next task was a thumb board which had three keys. The number of keys was already set by the creator of the Spiffchorder which I am copying. The first version was basically a piece which attached to the side of the keyboard and had three raised platforms for the buttons. The second version had dividers for the switches and a spot on the supporting structure was removed for key clearance. Only two versions were needed. 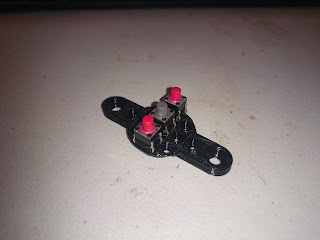 First print of the thumb board

Revolving model of the thumb board

After a good copy of all the pieces were printed, switches were glued in place. Ordinary SuperGlue was used since nothing better was available. The key levers with the changed angle are shown below. Wires were soldered to the keyboard and an Arduino. The wires were a salvaged Ethernet cord because the eight wires and simple RJ45 connector allow it to be very modular. Plus I had a ton of RJ45 couplers sitting around and scrap Ethernet cords aren't difficult to find. Programming will start soon now that a working model has been assembled. 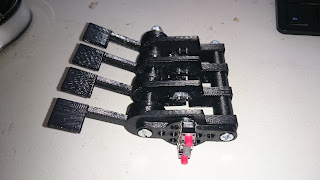 Good prints of everything in sporty black ABS plastic 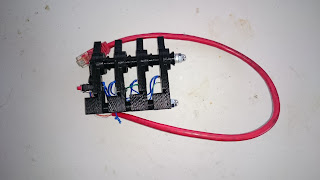 Ethernet cord on the keyboard module 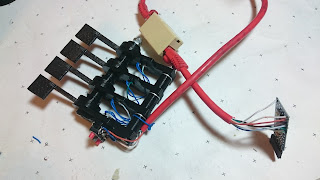 Wires soldered to keyboard and controller