September 19, 2015
The week started with a sad realization that the keyboard design with the fancy folding key levers simply wouldn't work. A fresh design was conceptualized which had finger keys and thumb keys opposite each other so pressure wouldn't push the keyboard away. A soft prototype was just switches jammed into an eraser with four on one side for the fingers and three on the other side for the thumb. 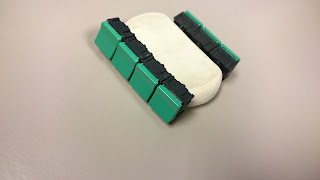 A more detailed drawing was made which outlined the idea of how to make the enclosure. At that point it seemed logical to add a small battery and rely on the wireless. Having the battery in hand also meant that the keyboard could be removed and used independently of the wrist harness. This approach should have been used from the beginning. 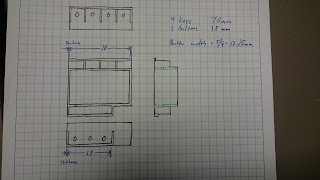 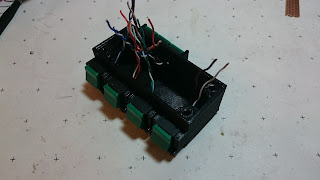 Electronics were added. A small piece of stripboard was included to provide enough terminals for ground wires. There was plenty of room in the enclosure so wires were left unnecessarily long. 23A batteries were chosen because they are small and provide more than 5 volts. USB connection was ignored for the meantime but may be added later. USB connectivity would just mean extending the micro USB port on the Arduino to a USB micro connector on the outside of the box. A test text was sent to Gavin using the keyboard entirely wirelessly/ 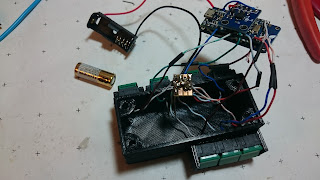 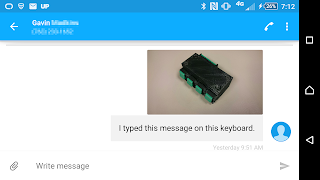 Programming for the servo controlling had been done a week ago but never put in a controller and tested. Thankfully the servo controller and keyboard controller were separated early on. A terminal board was given servo terminals and screw terminals to make it easy to attach two servo motors and three switches. The terminal board was then connected to the controller with salvaged wires. The program was put in but had a lot of bugs, some of which were due to the controller. These issues could have been avoided by using a larger Arduino Mini Pro but the difference in size, about half, may be worth the extra work. 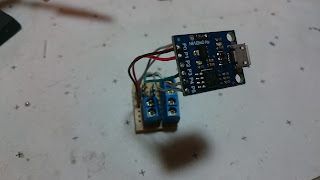 Digispark (Arduino) connected to a terminal board 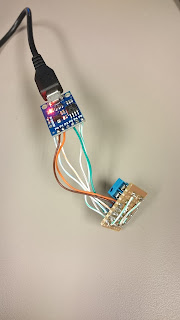 Programming the Digispark over USB