October 03, 2015
Servo arms were short levers with precise offsets meant to go around obstacles to achieve maximum rotation. These were replaced with longer straight arms. The new programming which allowed stock servos to rotate 180° was enough to warrant moving to the next phase were enough plastic was printed to make useful levers. The first lever lengths were just guesses which were enough to get the point across and see movement but they weren't long enough to put something into my hand. A switch was wired to the board for testing and images were animated which shows the range of movement and the synchronicity of the servos. Speed control was also possible.

A mount for the keyboard was a looming nightmare for this project due to the size of the keyboard but I stole another idea from the 3rd Hand project mentioned before. Instead of making a custom mount for this keyboard and mirroring it for the left-hand version I decided to mount magnets on a simple platform and a mating magnet on the keyboard. This does a few things. First, it means the keyboard can shift angles while typing or be rotated in order to be retracted. Secondly it means the keyboard can be released, easily, and held while the servos retract the holder for unencumbered typing. Lastly, this same rig can be used with any small device that is ferrous or has a magnet attached. This added versatility is really nice. Several ideas were discarded as to how to attach the magnet but ultimately a simple platform with a screw hole in the middle and spacers on the side were modeled and printed. The first printing wasn't perfect but it was updated and the files will be available at the end of the project. 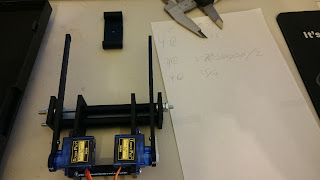 Taking measurements to make the next print better

Once all the pieces were printed a strip of Velcro was cut to hold the whole thing to a wrist band. It fit comfortably at my natural wrist and the levers were a good length to deliver something to my hand while holding it out of the way while being worn. In fact, while I was holding this a wire on the switch dislodged and had to be soldered in place. Without removing the rig, simply retracting and turning it off, I was able to solder the wire back in place. The rig wasn’t an interference which was good because a 30Watt soldering iron is over 250° Celsius which will burn skin immediately and melt plastic just as fast. Video and animation was taken of everything operating. The servos need some fine tuning to reduce energy consumption and there should be an enclosure but the wrist mount is pretty much done. Once I add a wrist switch this project will finally come to a close. It’s not as easy as it sounds. Probably. 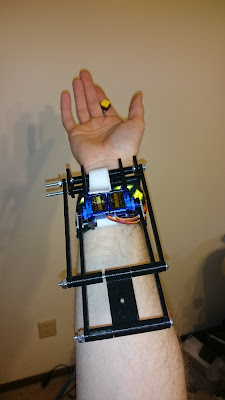