October 12, 2015
More terminals were needed to accommodate the infrared proximity switch on the servo controller. Only two terminals were needed for a simple switch but the proximity switch required two signal pins, ground and Vcc and three more connections were added because of the RGB LED. No programming has been done for the RGB LED which was cosmetic but will give honest feedback about the device. Stackable terminals were added even though the board wasn’t sized for them. Additional terminals points were allowed to hang off the board edge but the dovetail groove was sufficient to keep them in place. 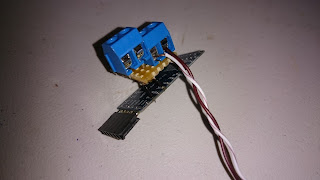 Stackable terminals being added to terminal board

A list was made which detailed the connections between the emitter and receiver tubes and the controller’s terminal board. Seven connections were necessary for:
Salvaged Ethernet wire was selected to connect the two board. 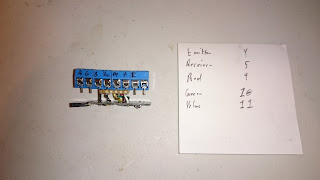 Component terminals on the back of the proximity detector were bent to match up with protoboard. Ideally the holes in the emitter and receiver tubes would have been spaced so the components would match up perfectly. Pin spacing on the RGB LED was not standard 0.1” (2.54mm) so the extra effort to create aligned holes would be wasted. 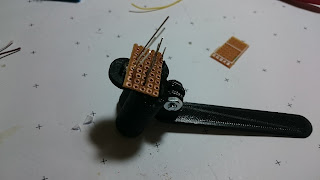 Protoboard on back of proximity sensor

4” (100mm) of salvaged Ethernet wire was stripped and tinned on both ends and soldered to the connections on the back of the proximity sensor. Seven wires were necessary and eight were available so two were tied together to form a large ground. Wire was soldered then the outer sheath of the Ethernet cord was slid over the wires as much as possible to minimize the exposed wires as much as possible. After the connections test correctly they will be coated in liquid tape to protect the connections. 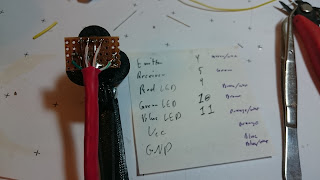 Disclaimer for http://24hourengineer.blogspot.com/
This disclaimer must be intact and whole. This disclaimer must be included if a project is distributed.
All information in this blog, or linked by this blog, are not to be taken as advice or solicitation. Anyone attempting to replicate, in whole or in part, is responsible for the outcome and procedure. Any loss of f
functionality, money, property or similar, is the responsibility of those involved in the replication.
All digital communication regarding the email address 24hourengineer@gmail.com becomes the intellectual property of Brian McEvoy. Any information contained within these messages may be distributed or retained at the discretion of Brian McEvoy. Any email sent to this address, or any email account owned by Brian McEvoy, cannot be used to claim property or assets.
Comments to the blog may be utilized or erased at the discretion of the owner. No one posting may claim claim property or assets based on their post.
This blog, including pictures and text, is copyright to Brian McEvoy.
2015-10-11 (Su)
3d 3D printed Arduino bluetooth chording control costume cyberpunk Dvorak folding fun handsfree hidden inexpensive keyboard mobile model punk qwerty wrist mounted