October 28, 2015
Any bolt which had to be a hinge point couldn't be tightened so the bolt had to be a locknut. A pair of jam nuts would also work. Up to this point ordinary nuts had been used because they could be moved easily while a locknut requires tools. Since all the hinges were confirmed the nuts could finally be replaced with lock nuts. 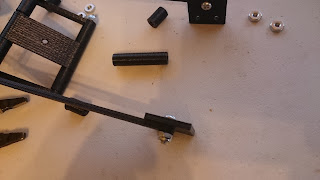 A bolt cutter was used to trim the bolts. Some of the bolts were long enough to cause binding while other were simply longer than necessary which didn't look good. While the bolts were off the longer spacers were placed next to the keyboard holder. 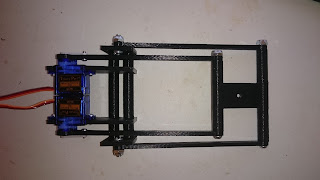 Servo horns were held in place by friction alone since they would occasionally skip or need to be repositioned. Once they were run a few times to confirm they would work where they were attached small screws were inserted through the horns and into the gear of the servo. 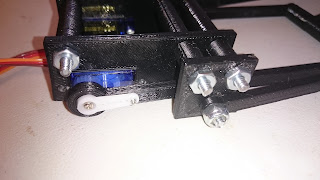 Servo with screw holding the horn in position

When the controller was put into the enclosure it failed to function. Troubleshooting showed that it was not a matter of wires shorting. The problem was an issue of the reset button being pressed to the bottom of the enclosure. A soldering iron was used to remove the switch entirely. 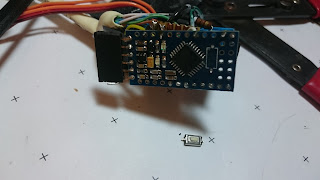 Hook and loop fasteners were attached to the bottom of a portable USB charger and a USB cable. The hook side of the fasteners were used so they could easily attach to the wrist band being used. 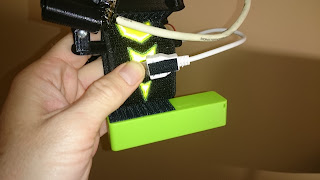 Hook and loop fasteners on the charger and USB cable

A video was made which showed the unit performing. Unfortunately the weight of the keyboard pulled the levers out of place while they were disabled. This can be fixed in the program by continuously sending servo pulses rather than sending periodically. The red and green lights change instantly but it would be preferable if they faded into one another as the servo moved. No use for the blue light yet but it could pulse slowly when the machine is resting.


Video demonstrating the weight of the keyboard

Disclaimer for http://24hourengineer.blogspot.com/
This disclaimer must be intact and whole. This disclaimer must be included if a project is distributed.
All information in this blog, or linked by this blog, are not to be taken as advice or solicitation. Anyone attempting to replicate, in whole or in part, is responsible for the outcome and procedure. Any loss of f
functionality, money, property or similar, is the responsibility of those involved in the replication.
All digital communication regarding the email address 24hourengineer@gmail.com becomes the intellectual property of Brian McEvoy. Any information contained within these messages may be distributed or retained at the discretion of Brian McEvoy. Any email sent to this address, or any email account owned by Brian McEvoy, cannot be used to claim property or assets.
Comments to the blog may be utilized or erased at the discretion of the owner. No one posting may claim claim property or assets based on their post.
This blog, including pictures and text, is copyright to Brian McEvoy.
2015-10-27 (Tu)
3d 3D printed Arduino bluetooth chording control costume cyberpunk Dvorak folding fun handsfree hidden inexpensive keyboard mobile model punk qwerty wrist mounted