November 18, 2015
A wrist-mounted chording keyboard is fine for typing while traveling because of its extreme portability and keys which are, by design, easy to find while typing. When desk-bound a keyboard attached to the wrist is cumbersome. The Spiffchorder was designed to be wearable but the earliest prototypes were made on a breadboard so they were flat. Desktop versions exist and a 3D printable desktop version is freely available on the site. The 3D printable model looked sleek. Rather than order switches and print a copy I decided to build one from wood. It has been a while since I got to work with wood and a wooden keyboard could be all the rage with steampunk fashions.

Sketching was done to brainstorm different shapes and configurations. Piano keys were a close approximation because the keys being designed were long, slender and hinged in the back rather than a square button which pushed straight down. Under each wooden key would be a modern microswitch which would be pressed by the key and the spring in the switch would be responsible for pushing the key back up.

A single #6 threaded rod would span the switches and be fastened through a wooden block similarly sized to the keys. Next to the mounting block another block would be hollowed out to hide the bolt ends. Two more threaded rods were going to go through the switch mounting holes and end the same way. There would be a block of four switches and a block of three switches to make the necessary seven switches. 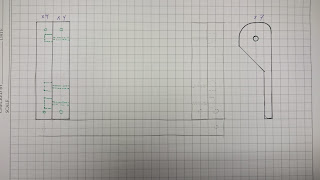 Materials were purchased for the project. Premium lumber was chosen because it was planed on four sides and required less work to get uniform pieces which was important. 1/8" (3.175mm) brass rod was purchased instead of threaded rod or #6 bolts. Microswitches were tested on #6 threaded rod and a solid rod. Each microswitch had one hole which was meant to apply tension to a rod so it could be mounted and positioned without tools or difficult procedures. While shopping it also seemed reasonable to forgo fastening the rod as previously planned and simply block the rod with end pieces. 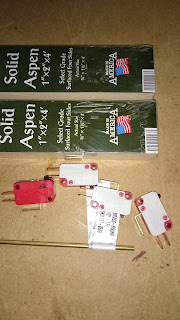 Instead of drawing a precise template on paper then translating it to wood the templating was done on a piece of wood. Going from the sketch a rough shape was drawn which gave sufficient clearance to the switch and ample leverage to press it. Each piece was rough cut to 6" (150mm). Eleven pieces were needed for seven switches and four end stops. This was reduced from 15 since the hollowed out end pieces would not be used. 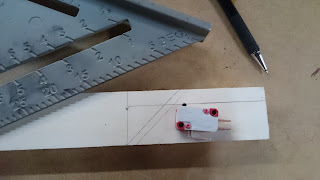 Template lines and holes were transferred to four of the blocks, but mirrored. Regrettably the holes on each side were close to symmetrical so it was difficult to differentiate them. It would be logical to drill the hole in the scrappable area in a more centralized location. Holes were drilled to the same size as the brass rod and bolts long enough to touch all the pieces were inserted. The bolts were temporary and only meant to hold the pieces together while working on them. 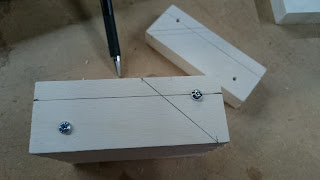 The left side screw is in the scrappable area

With the pieces fastened together it was easy to sand the edges which weren't in the scrappable area. A belt sander was used to round the corners. The corner nearest the hinge received the most sanding and could have been rounded further but it was boring work and merely for aesthetics. The other corners were rounded just to give them a usable look. Sanding usually take place after all the sawing is done since sanding is a refinement process but in this case sanding was done earlier because the bolt in the scrappable area holds the pieces securely but will be cut away. For this reason its position is arbitrary as mentioned in the previous paragraph. After sanding the scrappable section was cut away on a band saw which shows the final shape of the wooden keys. 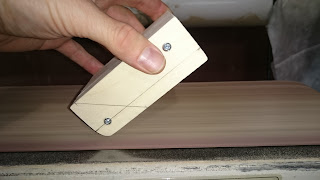 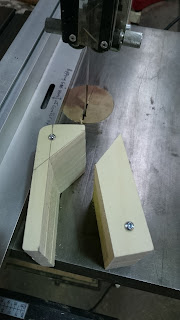