November 19, 2015
Processes shown yesterday were duplicated for the three switch array. The four switch array was meant for the fingers while the three switch array was meant for the thumb. Blind holes were drilled in the end stops to capture the hinge rod. Holes were the same size as the threaded rod to ensure a tight fit. The holes in the keys were drilled out to one size larger than the threaded rod so they could move easily. A bolt was pushed into the holes to align the keys on the end stop and a switch was positioned so it would be flush with the key underside when fully depressed and the spring action would return the key top to a position level with the end stop. Holes were marked and blind holes were drilled in the end stop 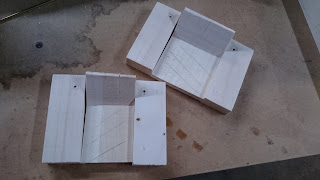 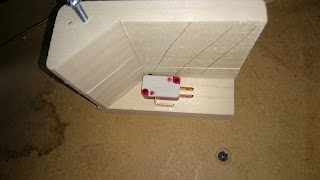 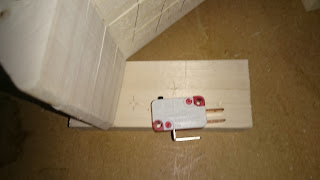 Short pieces of brass rod were cut and placed in the blind holes of the switch mounts. These short protruding rods were meant to press into the opposing end stop and leave mirrored marks so the switch rods would be level. The procedure worked well since the aspen was easy to dent. Harder woods would likely have difficulty with this step. Blind holes were drilled at these positions as well making three blind holes in each end stop. 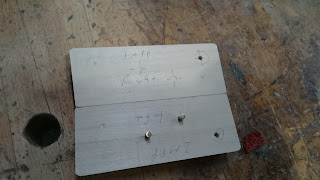 Protruding rods in an end piece 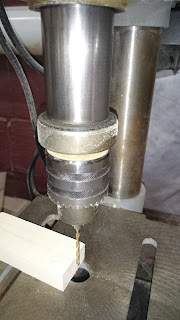 Rod length of the four switch array was determined by placing the rod through the keys and into an end stop. Five washers were added because a nylon or brass washer will be placed between each key in the final product. Total length, plus 1/2" (12mm) for the other blind hole, was marked on the brass rod. Three copies of the brass rod were cut on a band saw that could have been built shortly after electricity was popularized. Ends of the rods were smoothed on a belt sander. 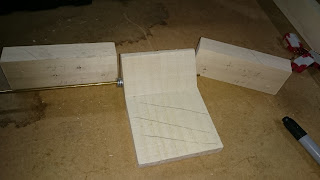 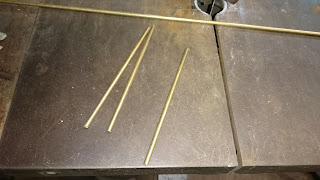 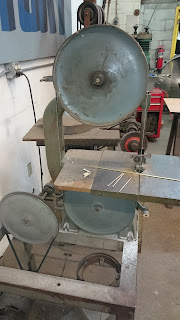 Rods were placed in the blind holes of an end piece and they stood practically parallel. Keys and switches were placed on them and everything lined up well until the second end piece was put on. Each rod lined up with the opposing hole as planned but there was a problem with the shape of the keys. When they were cut on the band saw they were all fastened together and a perfectly vertical cut wasn't made so the keys were not all cut to the same thickness. Varying thickness lead to uneven keys. To correct this the thinnest key was put on the band saw and the saw's fence was arranged according to the thickness of the key. All other keys were pushed through the band saw to make them the same thickness. 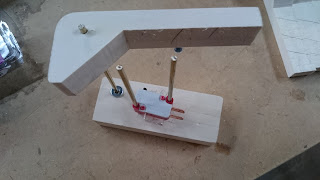 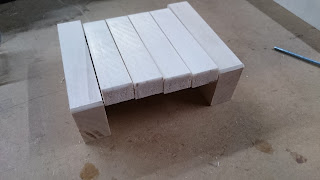 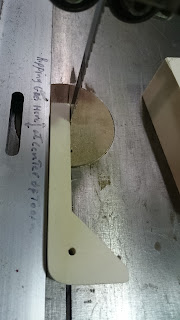 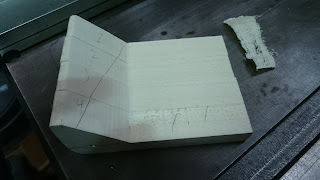 Identical keys next to the tissue thin scrap cut away 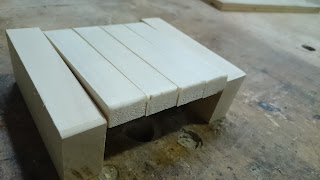 Switches and washers were installed to test the device. Key presses felt reliable and had a definite click from the microswitches. Only four switches were stocked so three more will have to be purchased. Procedures for making the keys uniform was repeated for the three thumb keys. With all seven keys built, but not given switches or electronics, they were arranged to get an idea of how it would feel to type. The most logical arrangement was to simply place them facing each other with a small gap. This is incredible news because it means that almost anyone can type with maximum comfort and therefore reduce hand strain without the need for customization. 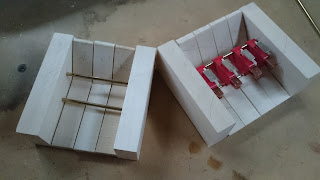 Key arrays with and without switches 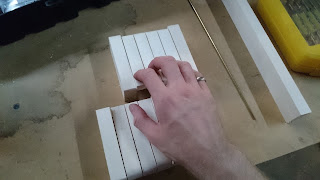