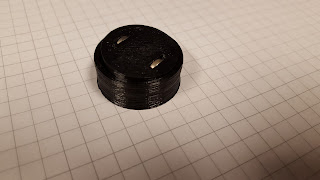 Spinner inside base which wouldn’t spin

The assumption was that the spinner would hang horizontally so long as the pivot point was above the center of gravity. This may be true but the precision of the printer could not achieve a perfect model. The pivot point was raised above the magnets again but only by a short distance. In this case maybe four millimeters. Measurements for the magnets were also changed to reflect the locally available magnets which were larger. 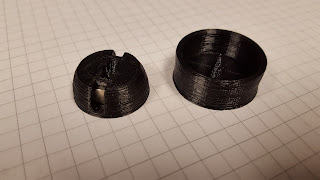 Spinner and base separated

The keyed base, which only allow the spinner to rock back and forth when facing north, was remodeled. In yesterday’s version incompatibility between the keyed hole and the keyed pivot point was the reason the spinner wouldn’t spin. Part of the issue was not using the correct measurements from the spinner code and the case code. This was corrected by creating appropriately named variables.

Similar changes were made to the base so the keyed post would mate with the keyed hole in the spinner. Remodeling was done with the post using the named variables. Length of the post was raised above the height of the walls. The walls were widened since the last model had some friction between the spinner and base.