December 25, 2015
What a busy day. I didn't have work today so I bit off a big job and even got it done. In the morning I started a blank OpenSCAD document and by dinner time I had rendered four shapes for the compass. From scratch and an idea of what I wanted based on the previous model. The old one was mostly a tangle of patches and quick fixes. It wasn't optimized and bad code had been piled on top of questionable code. Sure, it compiled, but it was spaghetti. This code had 16 variables declared at the beginning and those were used instead of trying to remember how much I divided by or when I added a printerError distance to a measurement. This should allow for changes to be done much more smoothly in the future.

An important step in making something is to imagine yourself USING it. I am far from a User Experience Engineer but I have imagination. Something occurred to me that should have been obvious, a haptic compass could be useful to people with vision impairment. It may be possible to build in an adjustment so any desired angle could be tuned with a dial and the user could walk in a straight line. This may be a solution with no problem but it would not be a costly device. Adjustability would not be an option on an implantable version.

New code was written to replace the previous models which had seen numerous updates. Code was written with the mindset of having a large array of appropriately named variables rather than subtle changes throughout the code.

The previous code was 256 lines while the new code, written in a day, was 190 lines for a 25% decrease. Models rendered with this code were similar to the previous but had smoother transitions between components and were most noticeable on the spinner.

Walls around the base were eliminated to save plastic but will be added when the printed models have been shown to be usable. Included in this code was a lid which was meant to keep the spinner in place even if the compass was to be turned up-side-down. This will be an important factor when making a handheld version.

A second base was made with a hollow post so a long #6 screw could be inserted. The tip, a simple cone on the normal model, was removed so the screw tip would poke out and provide a metal tip instead of relatively soft plastic. This is a way to test for excessive plastic-on-plastic friction.

Animations were made of each piece. The final animation shows a cutaway view of the spinner rotating around the standard base. Rendering was shown with printer error so the shaft and spinner have a gap between them. 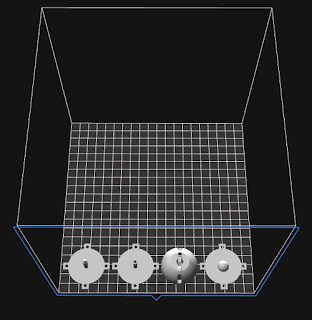 All four models in printing software 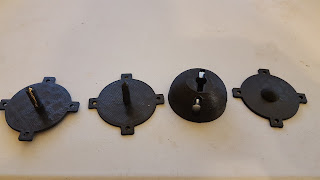