January 08, 2016
I am currently in Las Vegas for the Consumer Electronics Show CES2016 so I am going to post the start of this project until I get back. I haven't given up on the haptic compass, far from it, I am just a few thousand miles away from my printer. Although I'm very close to cutting edge 3D printers which has been exciting.

Acetone can dissolve ABS plastic which is used in many 3D filament printers. In small concentrations acetone will only soften ABS so people have been using it to make their 3D prints look smooth. I thought I would give it a try. My first few bumblings turned out really well but I wanted more data to observe. Sure, I could toss an acetone soaked cloth in a cake display with a lid and I could probably get good at judging how damp to make the rag. Not good enough. Instead I will perform repeatable experiments to show the effects of acetone on printed material. The container volume will be the same throughout all the test, only the concentration of acetone will change.

The basic premise of the test is that I’ll take a Pyrex bowl and put it over a glass plate to form a chamber of glass. Inside the chamber I’ll put a carefully measured piece of paper towel soaked in acetone and suspend it so it won’t make contact with the plastic. Time lapse photographs will be taken so the processing time can be easily observed. In this way people can achieve their optimum smoothness with less guess work.

For me it would be ideal to use a small amount of acetone and let it process for a very long time but some people may want to increase the concentration so it processes in less than an hour.

A photographing area was set up with a black bottom and white background. An LED light was positioned above to point down. LED lighting was used to reduce stray heat from the light source. Heating will not be a variable in this experiment. No wall in the testing room is an outside wall. A ceiling vent will be run constantly while testing is in progress. Vapors in the testing chamber should not be adversely affected by the vent or lighting. 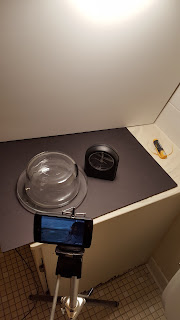 Camera equipment included a metal tripod, tripod adapter to hold a mobile phone and an Android mobile phone. A time lapse photography program was downloaded to the phone. 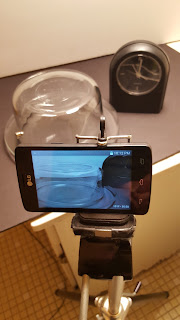 Preparations for the experiment included measuring paper towel areas to hold different concentrations of acetone. The paper towel will ensure that uniform proportions of acetone are kept in the chamber. A clock was purchased to show time and set in the field of view. 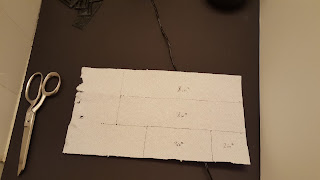 A control experiment was run which didn’t use any acetone. This was to show that no changes occur when acetone was not a factor. This was also a chance to test the equipment and procedure.

Photos were taken for four hours. The intention was to animate the photos as a .gif and post them on this blog. Unfortunately the resulting file was much too large even when recorded at only 640*480 resolution. A small .gif was made with only the clock as a demonstration of the file size. When finished, the clock animation, spanning almost four hours at 2 frames per minute, was nearly 9MB. This image was approximately 11% of the area from the original resolution.

9MB clock gif. 11% the area of the full resolution images

Due to some incompatibility of the phone and the time lapse program only 30 minutes, or sixty frames, could be reliably recorded. Each burst of photos was collected and animated but video could not be rendered by combining the bursts. After trying different methods it was possible to create long bursts, at least four hours, by stopping the recording and immediately resuming. The program also has a timestamp feature which will show a digital stamp of the actual time.