January 23, 2016
Changes were made to the key hole shape in the spinner. The picture below shows the old model on the far left and three new ones. The new ones have the same size round hole but the thickness of the slot changes. The diameter of the hole is equivalent to the distance around the nails in the base. The size of the slot needed to be close to the diameter of the nails so the spinner could wobble on the nails but only when facing north or south. 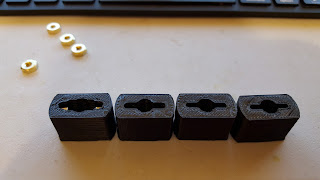 Changing holes in base

In order to accommodate the new spinners with the narrow slots a base was made where the nails were nearly touching. The gap was practically eliminated. In order to get the nails close enough the middle nail had the head cut away on two sides. It wound up being easier to simply crimp the nail head using large pliers. 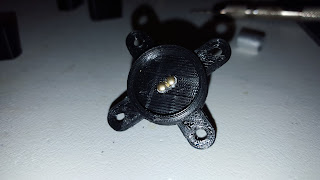 Nails on top of nails

Fortunately the size of the compasses have been getting smaller and smaller. Many of the rough edges like using bolts to hold the top and bottom together will not be necessary but for now they are an easy way to hold things together.


A new path was tried. Rather than using a keyed post and a keyed spinner the keyed features were in the form of the shroud surrounding the base and the outside of the spinner. The principle was the same where the spinner was only allowed to wobble when facing the correct direction. Additionally, this was the first version which should wobble only when facing north.

A problem with the spinner was the shape of the post hole. Where the post sat there only only a narrow cone which restricted the wobbling to an unusable level. The shape was revised to a cone which was drastically narrowed on the sides.

A narrow cone worked well for increasing movement but the magnets couldn't contact the post so a hybrid shape was modeled which was a large cone on top of a cube. A haptic compass still hasn't been made. 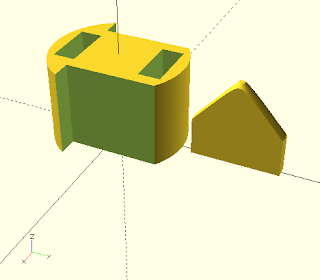