February 18, 2016
Phillip Huerter a technical adviser and team team member of GinzVelo follows this blog and encouraged and inspired me to build a recumbent bike. He even got me started with the research. If you don't know what a recumbent bicycle is check out the Wikipedia page on recumbent bicycles. The first three paragraphs sum them up well.

I wanted to do two things with this recumbent bike build which I have never seen done in tandem. The first thing was to make a recumbent bike without welding. Welding is a powerful skill I should have. The second criteria was to remix the bike without weakening the frame. It would be relatively easy to attach steel pipes to a bike by drilling bolt holes but I think I can do better. Plus, I am modifying a girls’ youth bike so weakening the pink frame seems highly illogical, captain.

A sketch was made of a child’s bike. The sketch was to serve as a base for an animated image outlining the basic steps of this construction. No detail was given and some steps were left out, such as installing a chain. The chain will also likely need an idling sprocket which was not mentioned nor the fact that at least two chains will need to be coupled together. The animations were made using GIMP.

Two bikes were purchased from thrift stores. The first bike was a youth bike which was intended for the base frame where everything will be added. Parts from the second bike will be salvaged and used on top of the base frame. The youth bike had coaster brakes which were acceptable for this project but not ideal. Hand brakes may be added and a BMX wheel may replace the stock wheel in the future.

Pipe hangers were purchased as the means for connecting new hardware without violating the integrity of the frame. In the animated image the pipe hangers were called clamps. These pieces of hardware should tighten around the frame and have exposed threaded holes where supports, called bars in the animated image, can be attached. Two styles were purchased but only the round ones were used. 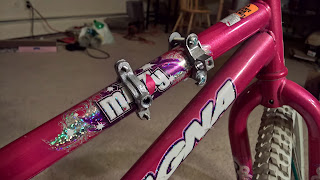 Choice of hardware depended on the base bicycle frame. In the case of the pink youth bike the frame was not cylindrical but had a slight ovoid shape. The other frame had cylindrical tubes with a standard diameter, 1” (25mm). Ideally both bikes would have had the standard diameter for all the pipes. Suitable clamps will need to be purchased for connecting the pipes of the cruiser bike. 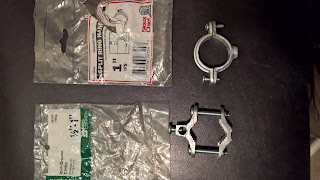