March 16, 2016
Upper and lower limits were recorded by the program to track the boundary of accurate readings. The low limit recorded the lowest reading from readings were presumably taken from skin. Readings from the skin tended to be away from 0V and Vcc. The highest reading worked similarly. Pseudo code was designed before that would calculate these limits based on the first readings that were seen then push the limits further out if such readings occurred. The flaw with this system was that errant readings could skew the rest of the data by keeping the limits far out. One method to correct this would have been to calculate the upper and lower limits based on only the previous X readings but this would have involved keeping a large amount of data in storage and repeatedly cycling through it. Instead it was decided to try "creeping" the limits in slowly. By continuously lowering the upper limit and raising the lower limit the range would stay roughly from one reading to the next but any time a high or low value was seen the program would acknowledge it. Errant readings would still upset the data but only briefly. 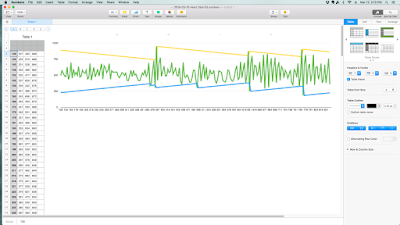 After seeing the data it became clear that the current method of acknowledging a heartbeat was not working. A heartbeat was considering anytime the recorded data was 3/4 of the way from the lower limit to the upper limit. This should be changed so that a heartbeat is recognized anytime a reading jumps at least Y volts from one reading to the next and is in the upper half of the limit range.