May 03, 2016
Inside and outside of the recording space sounded much different. Humans naturally filter out the unnecessary reverberations of an echoey room but when it comes to recording we expect to hear no reverberations. When we hear a Facebook video of someone in a large room the echoes don’t process as echoes, we just think of it as an amateur video. A quick recording, 65 seconds, was made to show the size and layout of the recording space but also exemplifies the difference in sound when the door is closed. The microphone used for the recording was the stock microphone in the mobile phone.

A pop filter was purchased to dampen the gasps and breathiness affecting the recordings. Unfortunately it came with mounting equipment that was not ideal for a shotgun microphone which was longer than a normal voice recording microphone. A nearby hardware store had enough parts to bring the filter to a usable position even though the filter and microphone used metric threads while the hardware was not. 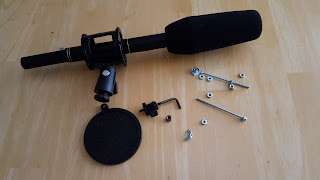 Chapter twelve was recorded without issues and may sound different because of the microphone arrangement. Longer and longer takes are being used to help with pacing. This should also make recording go faster and seem less halted. 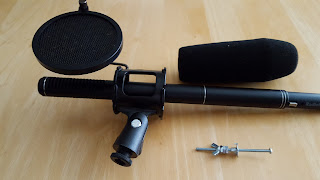