July 08, 2016
An Instructable was composed for the 3D Printed Topographical Lake but I gave it more appealing name. 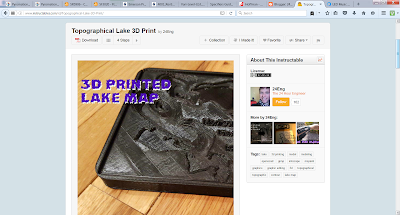 It has been a while since and Instructable was written. Composing one takes a significant amount of time. This was a very simple project and only had three steps but it took an entire evening. A new picture was taken for the print which was animated. Animated pictures don’t always work well with Instructables. The first frame was edited right in Instructables editor using Pixlr so there would be a title right on the picture which was the trend on Instructables.com. All the text was written during composition except the part about the map floating, that was copied over from yesterday’s post.

Yesterday’s post was written more like instructions than a regular post which made sense since it was everything necessary to recreate the project. This was going to be copied to Instructables but it seemed easier to write everything with a fresh start.

*****Update*****
Shortly after the Instructable was approved it was featured!