October 10, 2016
New printed parts were made with some difficulty when the printer software rendered some of them incorrectly. One of the plates, the heart of the project, rendered incorrectly but the rest of the parts were perfect. In addition to rendering incorrectly, I printed the wrong part so it was never going to work. Instead, half of the project was assembled which allowed the necessary measurements to be taken for the final assembly. 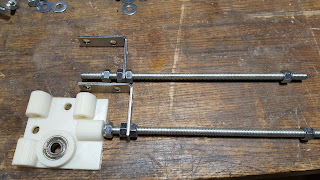 Drive plate and two of the threaded rods

The strength of the printed plastic was not high enough to support the stress of the long threaded rods. Perhaps if the parts were printed solid instead of hollow they would work but the design still wasn't meant for this kind of stress. Angle braces were purchased and drilled to 5/16" (8mm). By tightening nuts on either side of the brace a strong junction could be made that didn't interfere with the drive plate. 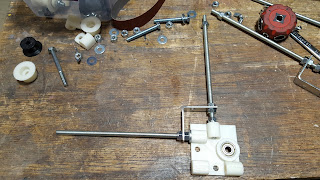 The rest of the newly printed parts were assembled. The old pulleys were used since they fit correctly with the last print but the adapters were weak and stronger version were printed. These adapters had longer bolt sockets and more support material. 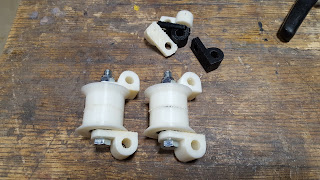 
Since the second drive plate wasn't available the project couldn't be fully assembled but the metal angle brace was enough to keep the shape of the project. All that could be assembled was assembled and a belt was attached to erect the final form of the project. If a stable structure can be made it will be time to drive a belt with a drill. Friction between the drive wheel and belt may not be enough. A rubber strap, even simple rubber bands, may need to be strung around it to provide enough friction to drive the belt. 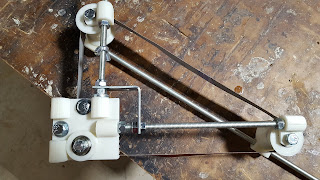