Since the last update, two episodes of 2 Cyborgs and a Microphone were released. You see, we decided to try recording bonus content. We took the opportunity to step outside our comfort zone a bit and do some entirely scripted work. It was my idea to have an episode which focused on cosmetic improvements and it was Tim's idea to have an over-the-phone interview with Satan. We recorded a show like regular then switched modes to reading lines. After recording an audio book, I had some experience reading lines so I was able to offer Tim some pointers and it came out well. We each wrote a script but Tim's version went into the show. My girlfriend was the deciding factor as to which one was put into the show. My version was put at the end. Check them out if you haven't already!

Tim is the slightly less crazy looking one on the right

Since the last update, I also participated in the annual IoTHackDay. My team never wins prizes but we learn a lot and always have fun so we have to give props to the organizers. This year we tried to use EMG, muscle monitoring, to control a slide whistle. When the day progressed and it didn't seem like we would make it, Angeliki Beyko, our teammate, tried to grapple with last year's project and successfully used EEG, brain monitoring, to control a glockenspiel. I was in charge of the presentation so that's why I'm below holding a microphone.

Panorama of the event 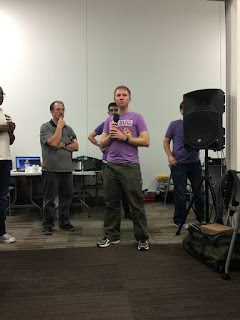 The Clockwork Theremin has progressed significantly since the Power Drill to Belt Sander Conversion kit was completed. Rather than walk you three three weeks of updates, I'll share the state the project is currently in.

All the gears have been sanded and the first half have been mounted. Some of the gears were given spoked hubs but that turned out to be a mistake. While writing a journal about installing the hubs it occured to me that the bearings should be mounted in the board instead. So that's what I started doing. This will also make it simpler to drive one of the gears with a motor since the shaft will pass through the board.

A video was taken to show that the first half of the gears rotating. It may be necessary to remove some of the nuts and washer between the gears since the small gear under the largest gear skips. This wasn't demonstrated in the video or mentioned in the daily post.

There is still a lot of work to be done on this project including mounting the second half of the gears, assembling the control panel, adding connections between the two, motorizing, and of course debugging. Plus a lot of stuff I'm glossing over.