February 14, 2017
The centering distance had to be adjusted. At first, it seemed like it would be acceptable to look to the side in order to view the screen but it became apparent that wouldn't work for a few reasons. First, looking to the side will probably lead to walking with a turned head. Second, constantly turning the eyes will probably exhaust them quickly. Third, it would look ridiculous and uncomfortable and therefore not get used as much.

A caliper was used to measure the distance to move the viewer center. The screen was simply held up and slid along the printed frames while wearing them. The ideal location was found and held manually until the measurement could be taken. 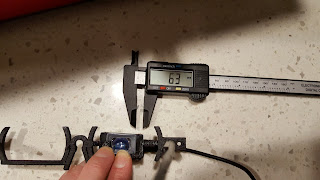 Deciding how far to move the viewer

The print was made and temples were added. The three prints were aligned on a desk and photographed to show the differences. On the far left was the first single-eye print which could adjust the angle of the viewer. In the center was the previous iteration which had the correct angle but the viewer was too far to the outside of the field of vision. Lastly, on the far right, was the print which featured the viewer closer to the optical center where it was most easily viewable.

Once the position of the viewer was set it became apparent that the shape of the temples was not usable. Straight rods perpendicular to the front provided no traction to the head so they were highly prone to slipping. Correcting the issues with the temples will be the next step.