February 20, 2017
My first attempt at making a smart pocket watch didn't go too well. I was pleased with the level of craftsmanship but the hardware, a first gen Sony smart watch, was not a good choice. One problem was the battery life on the watch which died after a couple hours. I'm not exaggerating; this watch didn't last until lunch. Putting the touch screen behind glass was also setting myself up for trouble. With more time and effort I probably could have made something work, I have confidence in myself, but it would have been wasted time.

My projects generally fall into two categories. The first category is repeatable projects which people can order materials and follow the steps to make their own exact copy. For the second category I've used the phrase scrapheap engineering. These projects were built with whatever I could find in my apartment. Generally I HATE seeing these projects. I've come across Instructables where people have found a piece of broken equipment, like a huge pen plotter, and written instructions for how to convert it to a tea server or something. Nope, the odds of finding the same equipment to repeat the process are as good as zero. If someone sees something cool on my site I want them to be able to build it themselves. If I'm lucky they will plus their own spin on the idea and improve but at a MINIMUM someone should be able to copy a project exactly.

I'm ranting and I don't care.

Open source hardware and open source software is great because it opens the door for people to springboard off the work of someone else and make improvements. Taking hard-to-find hardware and turning it into something cheap is fine and good for someone who desperately needs a robotic tea server and HAPPENS to have a broken pen plotter but it doesn't apply to anyone else.

A clamshell design was sketched on paper. The traditional pocket watch shape was going to be copied while making changes for 3D printing. The most obvious change was an increase in hinge size. Metal pocket watches can use small metal hinges but for the hinge to be purely plastic it must be larger. Holes in the hinge were made to accept a #6 bolt which was roughly 4mm in diameter. 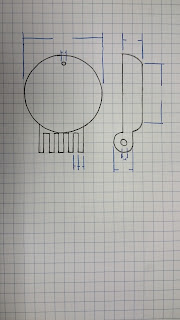 The drawing was modeled with OpenSCAD. Only two parametric variables were used. These were values the user could input to change the characteristics of the model. For example, the radius of the clamshell could be changed from 12mm (1/2 inch) to 50mm (2 inches) with one variable and the bolt hole diameter would stay the same. Or, the bolt radius could be changed from a bolt, 2mm (#6 bolt) to a pin 0.5mm without changing the size of the watch. 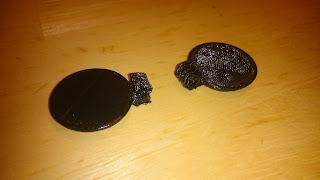 Printed version. Broken hinge can be seen in full resolution

After printing it was obvious the hinges would not be durable enough at this scale. The printer could not create solid hinges because of how thin the filament became upon extruding. The number of hinge prongs will be reduced and each hinge will become thicker. It would also help to print the design larger.