February 22, 2017
Hinge prongs were shrunk to account for printing slop. The resulting print fit together with some friction and demonstrated the need to have each half of the enclosure modified so finger could get purchase in order to open. Hinge alignment was good and a #6 (3.5mm) bolt could pass through the hinges. A drill bit was twisted through to smooth the holes but minimal plastic was removed. 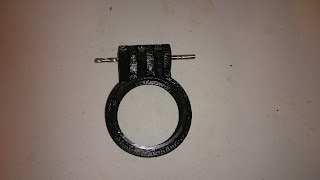 An animation was created to show the accuracy with which the hinges operated. No bolt was inserted during the animation, only part mating kept the halves aligned.

Measurements were taken from the smart watch to be integrated into this project. The chosen watch was inexpensive and boasted compatibility with many mobile phones. Measurements would be to fit the phone into the enclosure so that the watch would fit firmly and be held in place by friction while the other side could be opened to reveal the watch in order to be operated and closed to protect it. 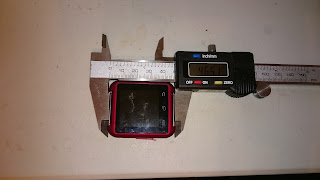 Taking watch measurements. More than one was taken, of course

A new model was created which had both halves included. Modeling both halves in the same workspace allowed differences to made since the two halves will no longer be identical as they were during the hinge testing phase. This also makes printing easier since there will only be one model to import. The model was improved by adding a window for the screen which will likely have a piece of polycarbonate glued in place. The top also has a recessed area for the thumb so it can be pulled away from the bottom. The bottom has two recessed areas so it can be pulled away from the top. This version was not intended to be spring-loaded like a traditional pocket watch. My emblem, the S shaped symbol, was removed from the bottom to add style. Upon completion of this project the OpenSCAD files will be released so anyone can remove this symbol if they don’t want it on their model. The thickness of the halves was also reduced so the final print will not be as thick. A living hinge was built into the bottom so the user can press the button easily by squeezing the side of the enclosure.