February 28, 2017
2014 was the last time this blog attempted to do anything with Laser Tag. Back then, Arduino was the most viable solution. Since then, IoT has exploded, literally and figuratively. Devices with wireless connectivity are plentiful and cheap. While Arduino is still a viable contender it may not be the best solution.

On the topic of selecting parts, laser tag’s biggest hurdle for me has always been building taggers rather than finding or programming the smart portion. Since 2014 more skills have been acquired, including 3D printing. Previously, attempts had been made to build taggers from wood, PVC pipe, inexpensive replica guns, AEG Airsoft props, and hardware store off-the-shelf parts. Any of those materials could probably work but every single tagger would be a laborious build. If a handful of taggers are to be built for hosting games each tagger must have parts which are inexpensive, easy to source, field repairable, and durable.

The approach to laser tag this time will be iterative instead of trying to include all the features up front. The design will start with a simple tagger and feature will be added to subsequent revisions. The first model will not even have a screen. Ideally, the tagger will be programmed by a professional software programmer who understands networking better than I. Creating a simple prototype will be integral to giving someone that opportunity.

A Raspberry Pi Zero with a Wifi stick will be the controller for the project since most of the components accept 3.3V. The Pi0 also has lost of room for expansion without moving to a different controller and it has more than enough processing power for a simple laser tag game.

Enough background.
----------
Sketches were made for some of the parts necessary to build a handgun-style tagger. Some of the parts will be off-the-shelf hardware and electrical parts so it will be a mixed-media type of project. This has been the case with most of my 3D printed projects.

The first model was the base. It was designed to use the handle from a packing tape dispenser which was a useful item discovered years ago since it is a durable handle which can be found at many stores. It will allow a Weaver accessory rail on the bottom for things like flashlights and spotting lasers. An automotive switch will be the trigger, another useful discovery. 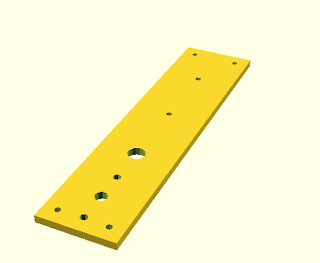 Model for base of tagger

Next, a model for the lens holder was made. For a lens, one of the biconvex lenses found in Google Cardboard knockoffs will be used. They’re respectable quality, easy to buy, and inexpensive. The vertical mounting holes will fasten the two halves together and provide a gap where the next model can fasten.

Rotating model for half of lens holder

Lastly, a model for the infrared emitter tube was made. This distance will have to be fine-tuned but it should be uniform and repeatable once the correct distance is found. It should be the focal length of the lens but that may only be a starting point. The lens built into the IRLED may also factor into the distance.

Rotating model for half of emitter tube