Project management sounds like a boring subject. Maybe it is. Maybe listening to a couple cyborgs talk about it in relation to an implantable long-range RFID would spice things up for you. Yeah? Give it a listen.

Solely using a Raspberry Pi as a controller was not ideal. It was cost-effective to only buy a single board but it did mean that anyone copying this project would HAVE to use a raspberry pi as well. Since the infrared transmission using GPIO and serial ports was a failure, I decided to put all the inputs and outputs, including the infrared stuff, onto an Arduino board. 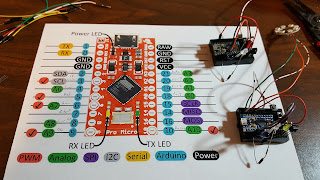 No serious automation would take place on the board. It was simply going to act as an interface between the controlling computer and the real-world devices. All the decisions would be made in the computer.

The Arduino would have to recognize data from a USB port and from infrared signals. To demonstrate this an output was controlled with infrared, which is a pretty typical step when creating infrared devices.

Properly transmitting infrared is also a task in itself. And getting a single device to do this isn't as easy as adding a line of code below existing code. Fortunately, for demonstration purposes, infrared shows faintly in digital photography. The purple light seen below is the transmission bursts of infrared signals.

The purple light is infrared

Eventually, after a lot of forum searching, the transmission and reception was working together. Two units, with identical programming were able to talk to one another and send relevant data to the computers connected to them.

Receptions from the day of work

A protocol for a computer to talk to the Arduino would be necessary. Any connected device capable of talking over a serial com would be able to interface with this project. That should mean that a Linux computer, such as a Pi, or an Android, or Windows machine could all act as the computer for a game. All three should even be able to play in the same game as long as they use the same game protocol. This is something the old version, which used solely Pis, could not do. 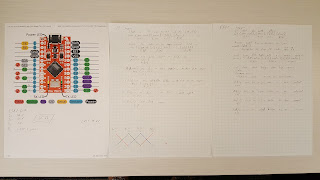 Reworking the inputs and outputs and organizing the protocol