April 11, 2017
Attaching inexpensive tactile switches to a breadboard is a fool's task.

Some tactile switches were soldered to scrap protoboard to make a testing rig for the TRIGGER and RELOAD buttons. They could be tested by using a jumper but the testing rigs will simplify testing later with a computer attached. Nothing special, just a common to each switch and a signal from each switch. The black component in the middle was a header pin socket so DuPont leads could be attached. 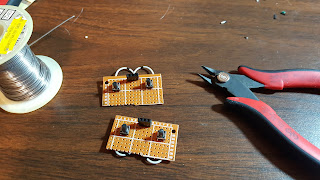 The button rigs were attached to each breadboard. In the programming, a signal (30, HEX) was sent when one button is pressed and another (31, HEX) was sent when it was released. There was some confusion in the code which resulted in a continuous string of PRESS and RELEASE for one of the buttons but it was solved. No debouncing was used but it could be added in the future since these are RISING EDGE and FALLING EDGE notifications. 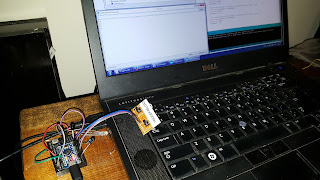 Two outputs, the laser output and flashlight output, were programmed and tested. Each one was told to activate or deactivate by a serial command. All the automation will be handled in the computer so the trigger and reload button mentioned above have no bearing on the outputs shown below.