April 14, 2017
Arduino software was being written for a couple days. Fortunately, since the automation will take place in the computer, the firmware was pretty simple. Getting information to and from a computer via a USB cable is relatively easy but transmitting data over infrared isn't so straight-forward.

Two Arduinos with identical programming were placed across the room from one another. One was connected to a Windows machine running Arduino while the other was a RPi 0 with Putty.

Troubleshooting the data transmission of data finally yielded usable results so the first revision of the firmware is available for download. As of writing this, the revision is 0.0.5 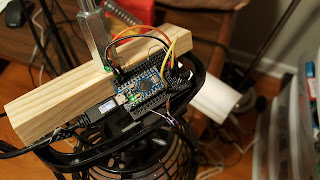 Arduino propped up in the office

The most perplexing case in the troubleshooting was a bizarre case where one byte was automatically decremented if the next byte was too large. This was noticed by chance and took an hour to track down. Obviously, there was something wrong when data came out too low but the cause required investigation. When the problem first appeared, the transmitted data was the highest possible value, 255 255 255 255 but the received value was 255 254 255 255. The only clue was that this happened when the values were high because transmitting 0 0 0 0 worked well.

Numerous transmission were made to discover that the byte was automatically lowered, for reasons unknown, when the following byte exceeded 127. An if statement had to be written for his one peculiar case but that sort of thing may be a mystery for a long time. 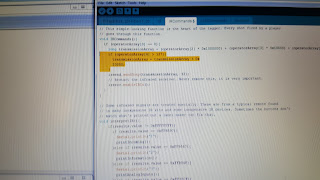 Each time I thought the firmware was finished I would update the revision. The first time I called it 0.0.1. When I saw that it wasn't satisfactory, I immediately rev'd it to 0.0.2. When I thought that was good it was rev'd to 0.0.3. Again back to an even number when things were clearly wrong, 0.04 and finally, today, 0.0.5. I'm certain there will need to be more changes in the future and until that point, it will never be considered 1.0. The most recent version is available below. 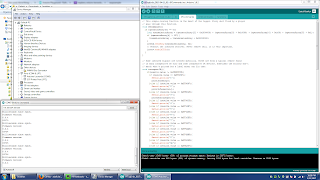 A list was made of the data swapped between the tagger and computer.

3
// This requests a reading from the analog inputs on the Arduino.

STUFF you can receive FROM the tagger
########
// A string of 8 HEX characters is an indication that some infrared signal has been received
// There are no spaces in this string.

49
// The trigger switch has been depressed.

50
// The trigger switch has been released.

51
// The reload switch has been depressed.

52
// The reload switch has been released.