The thirty-second episode of Two Cyborgs and a Microphone was about performance enhancing chemicals, up to, and including anabolic steroids. Not only that, but we also talked about gene doping, a treatment which may or may not actually exist.

Four forward arrays were assembled. Assembly included mounting all the LEDs, mounting the lens holders and lenses, arranging all the internal emitter spacers, and gluing the sensor in place. 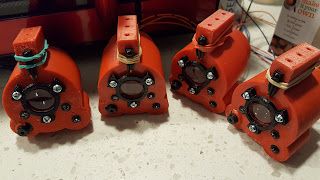 Mounting the trigger switches had been a pain for a long time because the switches were cheaply made and the plastic nuts didn't fit properly. One option would have been to glue the switches into the tagger but if the switch ever failed, the switch would have to be disassembled from the inside of the tagger in order to remove it. Instead, a new model was made which could be removed easily from the tagger even after the switch had been glued in place. 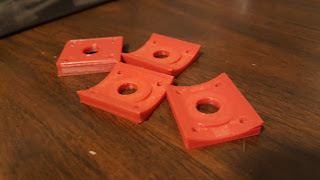 A new trigger adapter was tested on the shortest tagger. It worked nicely and the only place glue was necessary was between the switch and the adapter. A larger hole in the pipe was necessary. Keeping the trigger a comfortable distance from the handle may be difficult. The handle may need modification.

Light rings were given a set of wires to connect them to the controller board and other lights. Three wires in and three wires out. No attention was given to wire color coding this time since new wires were being used. 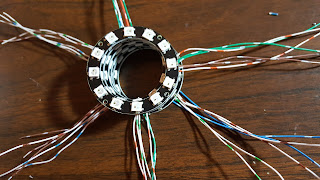 New pipes were cut in order to have spares on hand and to hold all the available parts. The pipes were cut, lengths of tape were applied, center lines were drawn, hole positions were marked and the center line was scored with a razor knife so attaching the handle and foregrip will be easier later than if the center lines hadn't been marked. 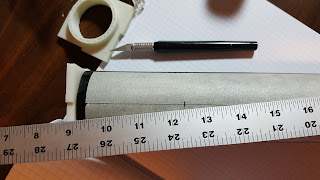