August 23, 2017
My half of 2xCb+Mic is recorded in a converted closet where all my recording stuff is set up and stored. The microphone to USB adapter has been reliable and familiar so I didn't want to leave it behind when traveling. A portable microphone stand with a tablet holder was designed to make portable recording easy.

Enough materials for two complete systems were purchased including two tablet computers, two microphone→USB adapters, two sets of headphones, and two microphones. This would allow totally separate channels to be recorded then mixed into stereo later. Which is what happens with the podcast anyway.

The first concept was to make a 3D printed model capable of holding everything but that method doesn't work for everyone and it has been awhile since I worked with wood and saws. Lightweight plastic didn't seem like the best material for this project so hardware was selected based on making this project from wood.

Since vibrations like to travel through rigid material, the bottom of the mic stand was going to be layered with a mouse pad which also provides some traction. This layer of shock absorption could also be duplicated with shock absorbing feet or foam pads.

Security camera mounts were selected to hold the microphone and tablet since they are easy to position, inexpensive and commonly available. A linked parts list can be found at the bottom of this article but less expensive alternatives can be found on sites like eBay.

Two blocks of heavy wood were cut so they would each use half of the mousepad. This was scrap wood found at the hack space but oak would be a great choice because of its high density. Oak would also look nice if it was unfinished. 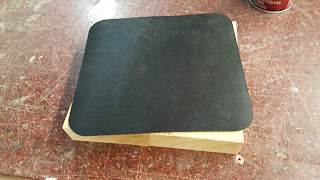 The mousepad was cut in half with a razor knife using the blocks as a line-guide. Using the blocks themselves ensured that the pad would fit exactly as desired. 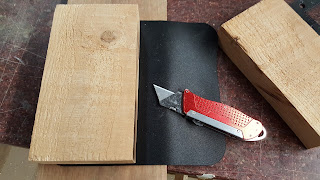 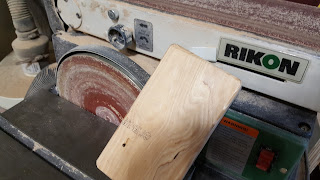 Sanding the corners of a block

Look below at the parts list for help selecting mounting hardware. Just about any security camera mount could be used. Two different heights were selected for this project so that the microphone could be elevated while the tablet was kept low. The bases were used as templates and holes were marked on the wood. This could have been done with a scratch awl too. More than likely, the screw holes weren't even necessary and screws could have been driven without starter holes. 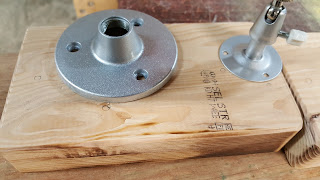 The marked holes were drilled with a small drill bit. Screws came with the mounting hardware but different hardware could have been selected at the builder's preference. 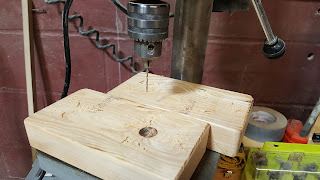 Two layers of paint were applied to the top and sides with a foam brush. Ordinary latex paint was used since it was available and seemed like it would go well with the brushed finish of the mounting hardware. Ideally, black paint and black hardware would have been used since most of the recording equipment was black. 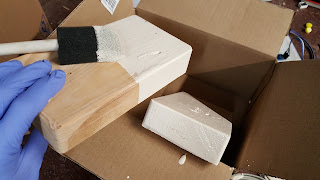 Not my favorite color but it was on clearance

The mouse pad halves were trimmed so they wouldn't stick out from under the base. They were cut with a razor knife but scissors would probably have worked better.

When the paint dried, glue was applied to the unpainted bottom. The mousepad was placed on the glue so the bottom, which would rest on a desk, was exposed. This way the pad would provide traction and shock absorption for the mic holder. 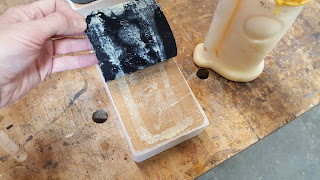 Glue between the base and mousepad

While the glue dried on the underside, camera bases were mounted on the topside. They were mounted as far away as possible without reaching over the edges. 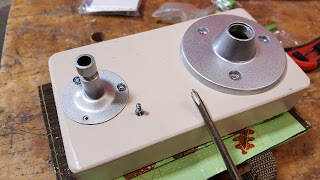 Screwing the bases into place

Camera mounting, like the security camera-mounts here and microphones, use different sizes of mounting screws. In this case, two adapters were used in tandem to adapt the 1/4-20 camera base to the 5/8-27 microphone base. 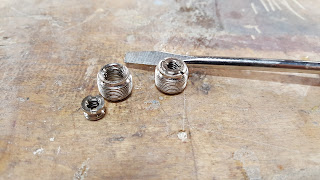 The adapted base was attached to the taller camera mount. After rough estimations, it seemed logical to mount the screen lower than the microphone so the overall height of the device would be roughly the same since the tablet will be taller and therefore should be mounted lower. 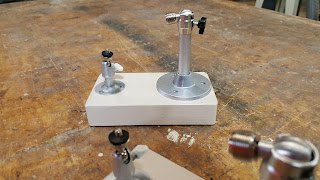 All the electronics were attached and connected. The small tablet computers were put into their tripod adapters and the microphones were attached to the security camera posts. The microphones were run to the USB adapters. Headphones also connected to the USB adapters to provide direct monitoring without the PC which can be responsible for distracting lag. 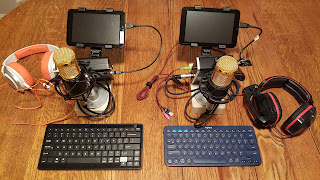 These computers have been used for recording in the past due to their small size and portability. The parts list doesn't include the USB adapters or microphones since those are often up to the taste of the builder but they're included in this sentence for reference. 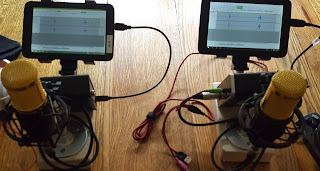