September 03, 2017
Loading the Python program back into a different operating system on a Raspberry Pi Zero proved to be more difficult than the effort was worth. Instead, the Pi where the program was written was found, after a small treasure hunt. The problem seemed to lie in the serial port name. The most useful card was given a small touch of silver paint on the end for easy identification. 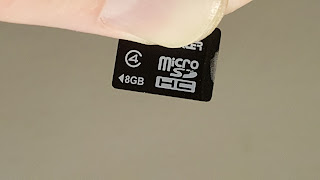 This card contained a working program and it interfaced with the Arduino firmware which had been loaded before. A remote was used to prove it could receive IR signals from the sensor boards all around it. The signals and addressable LEDs worked as expected. 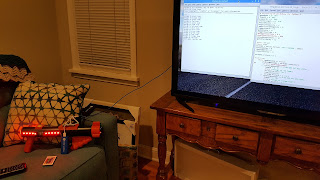 The trigger was tested and the transmitting LED was tested and both worked as expected. However, the red LED and the laser would not turn off and the flashlight LED didn't deactivate when it was supposed to turn off. These problems could be hardware or they could be software. The second tagger should be given the card with the working software to compare and see if the problem is software or hardware.

Testing the transmitting LED which flickers as expected