Episode 034 covered the reactions Tim and I have experienced and what we've seen in the media about reactions to other biohackers. As a fringe group, we want to keep things looking optimistic but that isn't always the case as we discussed in episode 034.

Programming for the taggers was finally dragged out by finding the microSD card where the original code was written. This was plugged into a Raspberry Pi Zero alread mounted to a tagger. Some, but not all, of the the hardware functioned properly.

The card was tested in the second tagger and a different set of problems appeared. The taggers were not fully functional but the problems seem to be a matter of troubleshooting hardware rather than errors in the programming. For that reason, PiTagErrUs won't be shown on this blog until it is fully functional. 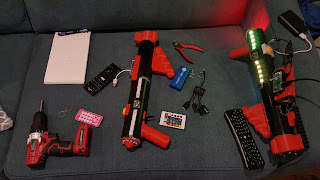 A new project was started. OpenVectorKB is going to be a programmable off-hand keyboard designed for OpenSCAD. OpenSCAD uses vectors, three numbers in brackets, which require laborious typing. Sometimes, it is useful to tweak the numbers incrementally which involves replacing the number in question and refreshing the view. Instead, this functionality will be mapped to rotary encoders which can quickly increment or decrement any of the numbers in the vector. 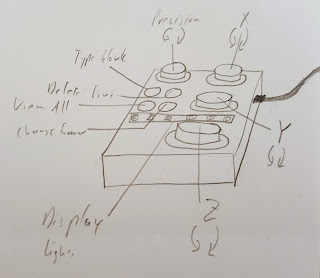 A schematic and layout for the board were made. The schematic was a simple matter since a Teensy LC would act as the controller. Alternatively, the controller and supporting components could have been components on the board in order to save cost. Using the Teensy LC intact will take significant time off the development and since this was not intended to be a commercial product, the cost is less significant. 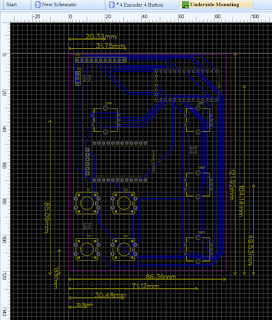