September 16, 2017
PCB prices take a sharp jump when they exceed 100mm on a side. There also seemed to be a shortage of BlueFruit EZ-Key modules. These reasons were enough to shrink the size of the board by eliminating the EZ-Key from the schematic and layout. In order to retain functionality, the data pins were moved to the accessory port pins so anyone could attach an EZ-Key board with a simple 2x6 header connector. This port is also useful for anyone messing with the firmware who wants to add more buttons or encoders rather than letting pins sit unused. 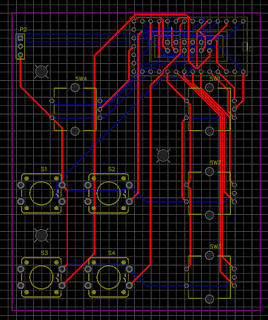 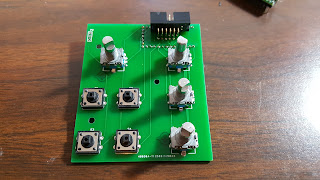 Assembled board with encoders and tactile switches

With a usable set of hardware, programming was started. As with most projects like this, the serial port was integral to making working code. The first step was to get accurate serial data back from the board while monitoring with the Teensy. PJRC’s encoder library was used and it worked well even with the inexpensive encoders. 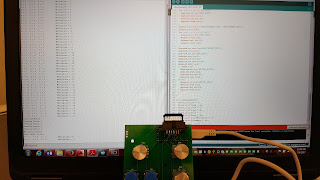 Reading serial output from the hardware

After there was proof of good readings from the serial port, it was time to turn them into keyboard commands which could interface with OpenSCAD. By using keyboard commands and emulating a USB keyboard, there was no software to install so the OpenVectorKB was plug-and-play for any OpenSCAD user. A video was taken to demonstrate the functionality.


Early video demonstration of the OpenVectorKB

The enclosure was finally printed and all the button caps, encoder knobs, and LEDs were installed. The LEDs were not difficult to program, but displaying the magnitude/precision values was a little tricky. For a solution, one of the far left or right LEDs lights up in red and the adjacent LEDs show how precise the adjustments will be. Blue LEDs to the left of the red indicate the value is greater than one and which order of magnitude. Similarly, green LEDs to the right of the red indicate if the value is editing the tenth’s or hundredth’s place.