Episode 035 is all about cryotocurrencies. Tim is deeply invested in cryptocurrencies and wanted to share his knowledge and experience. Most of the money we spend nowadays is virtual. Your bank cards, virtual money. Credit cards, virtual money. Bitcoins, Litecoins, Etherium, definitely virtual currencies. "Wallets" for these currencies can be stored on implanted chips and as more places start to accept these forms of money, it will be possible to pay, barehanded. Listen in episode 035.

Rev 3 of the OpenVectorKB PCB arrived and components were added. The encoders fit nicely which was no surprise because they fit in REV 2. The big switch here was that the inexpensive tactile buttons were swapped out for keyboard keys. Blue Cherry switches if mechanical keyboards are your cup of tea. The board on the right was given the header sockets but they were installed on the wrong side of the board. Oops. 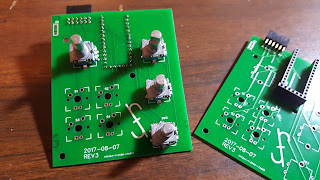 The problem I had with the keyboard switches was clearance between the keycaps. Keycaps are the bits which sit on top of the switches where your fingers actually touch. Rather than completely scrap the whole crop of boards, some small plastic rectangles were printed and glued to the tops of the switches. 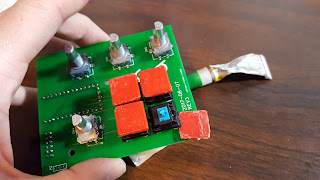 The enclosure had to change from round button holes to a large rectangular hole where the keycaps would poke through. Square holes like this are easier to print than cut and it saves plastic since there was less to print. The alignment of the communication ports was also moved but they were still to far from the top of the enclosure.

Everything was finished! A demonstration video of the OpenVectorKB was made which showed off all the features including the latest firmware changes which allowed it to act like a mouse and quickly undo/redo. Watch the video to see what I mean.

The next project is PCB business cards. The biggest problem with an electronic is giving it power. Battery holders are notoriously bulky so this project hopes to use the PCB itself as the battery holder. At first attempt, the idea of conductive "rake tines" was a failure. It could only be made to work by attaching copper tape to the underside of the board and the idea behind this project was to use single-sided PCBs to save cost.