April 02, 2018
Sometimes an idea springs into my head, and it is ready to be built that day. Sometimes, those ideas need to gestate for a while before they're ready. This idea required some maturation. In the simplest terms, it's not that complex of an idea. It is simply a typing keyboard which can be constructed to fit the user's hands. The majority of keyboards have a configuration of keys which are arranged with offset keys, like the generic $5 USB keyboards or the ones which come in almost every commercial laptop. Some expensive keyboard, often two separate modules, have keys arranged in a grid. Some of the less common keyboards have keys arranged with a specific offset decided by their creators which are likely based on her or his own hands.

ModuKey was an attempt to make an affordable keyboard which could be arranged to fit each user by giving her or him the ability to lay out the keys as the keyboard is being assembled. This comes at the cost of having to assemble it by hand, so it is geared toward the maker community who isn't afraid of a little programming and soldering. Standard mechanical keyboard switches were selected with the standard 19.05mm (0.75") spacing. Since all the circuit layouts will be open source, this will also be adjustable.

Enough background
----------
Four pages of notes were sketched to illustrate the ideas of the ModuKey project. The first page had the general description of what the keyboard would entail. It also had sketches of potential arrangements for the keys. These arrangements were based on keyboards already on the market. They were designed with the idea of putting an IO expander on each board such that it could be expanded with I2C communication. The serial bus allows many types of expansions to be added at any time while maintaining a common footprint. The common footprint should allow community designs to be shared and expanded.

The second page of notes included different expansion arrangements which may be useful to different people. For a controller, a Teensy-LC was selected since it could act as nearly every function of a keyboard or mouse without painstaking code. This was selected to appeal to people who may not want to learn a lot of code and so that it can be logically transferred between people. The Teensy can also act as a MIDI device or a game controller, so it is not limited to keyboard commands.

The third page of notes included some standard arrangements like a number pad but also some unusual designs like a musical keyboard arrangement. Boards with blank areas so that any discrete switch can be connected, were mentioned. A single Teensy may be able to act as a keyboard and joystick simultaneously but regardless. There would be no reason that arcade joystick parts could not be used or even mapped to arrow keys.

The fourth page of notes described an arrangement of 2.54mm (0.1") spaced header pin holes which were meant to be linked from board to board. Instead of expecting the user to run a series of wires from the correct pins, this would allow the user to place them next to each other at any interval and make four connections straight across between the boareds. There would always be at least one pin of each necessary connection across from a corresponding pin. This should make soldering with a protoboard or any similar board simple. Since they're standard headers, it will be possible to make any arrangment by soldering wires if the user decides to do so. 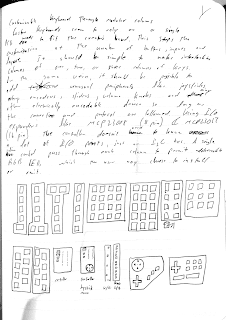 Page one of notes 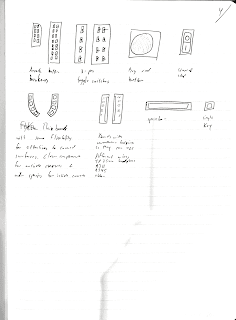 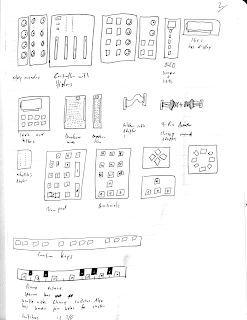 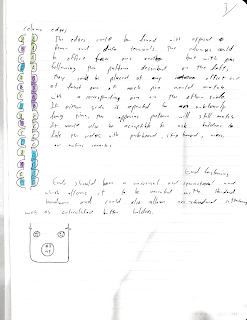